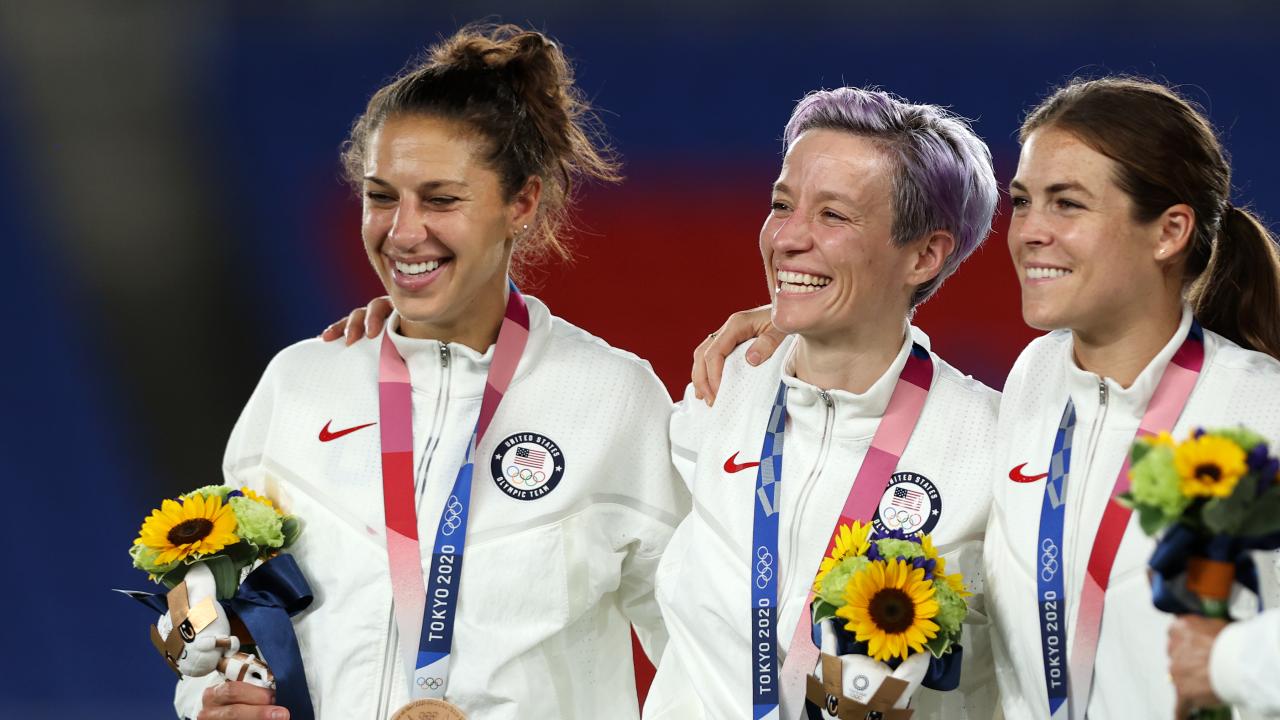 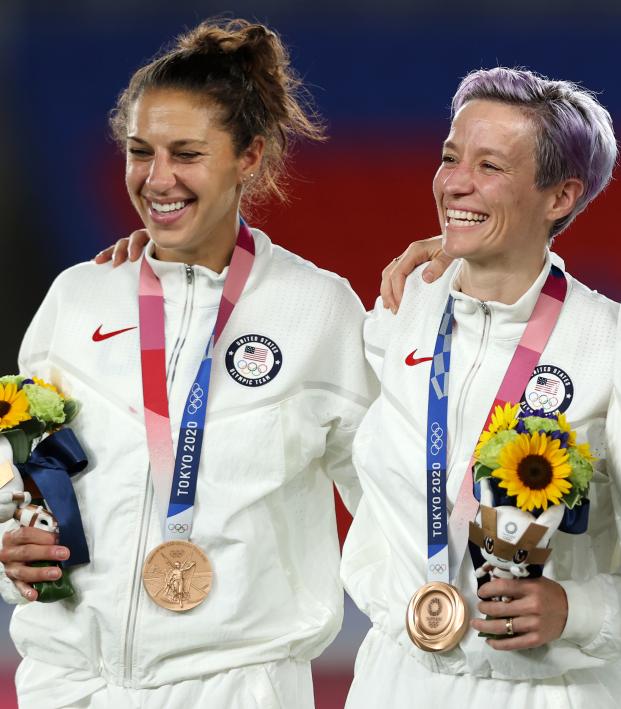 After a 2020 that was, in many ways, a lost year for international soccer, the U.S. women’s national team went into 2021 with high hopes. The year ended with feelings of missed opportunities and the need for a rethink moving forward less than 20 months away from the next Women’s World Cup.

With Women’s World Cup and Olympic qualifying in July, the USWNT will need to regroup from a disappointing 2021 sooner rather than later. Fortunately, even a down year for the best women’s soccer team in the world is still a great year for most. But a great year won’t cut it in 2023 when Australia and New Zealand host the Women’s World Cup, making 2022 vital for preparing for the USWNT’s next generation.

A few months after he was hired as coach Jill Ellis’ replacement, Vlatko Andonovski’s tenure was abruptly derailed by the Covid-19 pandemic early in 2020. Though he managed to win the SheBelieves Cup and go unbeaten in nine matches in 2020, there was a sense he hadn’t really been given the opportunity to make his mark on the new squad given a year without any major competitions, the Olympics having been pushed back a year by Covid. Andonovski’s notebook arguably received as much attention as his tactics in 2020.

Thus, 2021 was really Andonovski’s first year to fully make the USWNT his. Hopes were high after 2020, with a chance to send Lloyd and perhaps Megan Rapinoe off into the sunset at the Tokyo Olympics. Hopes were just as high about young talent coming through the ranks.

The challenge for Andonovski in 2021 was to blend together the veteran players, those in their prime and the youngsters to challenge for a first Olympic gold since 2012. In that respect, the USWNT failed. Though the U.S. lost just two matches all year, both came at the Tokyo Games. A bronze medal was certainly better than failing to medal at all, as the USWNT did in 2016, but anything short of gold is considered a disappointment for the U.S. The 2020 Olympics marked the first time the USWNT had ever lost two matches at a major international tournament.

It was a subpar result at the second-biggest competition for the USWNT, and it came after a year that began with such promise.

At the end of 2020, Sophia Smith became the first player born in the 2000s to earn a USWNT cap, becoming the face of the next generation. Five weeks later, Brazilian-born Catarina Macario received a FIFA one-time switch in nationalities to represent the U.S. A day earlier, Macario chose to play for European powerhouse Lyon; three days later, Smith became the first teenager selected in the NWSL draft (by the Thorns). The future was looking bright.

The USWNT started 2021 with two blowout wins over Colombia, including Macario’s first international goal. The U.S. cruised through the SheBelieves Cup without conceding, beating Canada (1-0), Brazil (2-0) and Argentina (6-0) to win the competition.

In April, the U.S. traveled to Stockholm to face old nemesis Sweden. The Americans were outplayed on the day, but a questionable call gave them a late penalty kick, which Rapinoe converted to salvage a 1-1 friendly draw. Two weeks later, the U.S. was drawn into the group of death at the Olympics, facing the daunting challenge of playing Sweden (again), Australia and New Zealand.

The U.S. bounced back from the draw to beat France 2-0 in Le Havre a few days later, but the cracks were showing. Pre-Olympic friendlies against Portugal (1-0), Jamaica (4-0), Nigeria (2-0) and Mexico (4-0, twice) seemed to show the U.S. was on the right track, but those hopes were quickly dashed once the USWNT arrived in Tokyo.

In the Olympic opener against Sweden, the Americans were soundly trounced 3-0, a score line that was better than the USWNT’s performance deserved. Beating New Zealand 6-1 in the next match was enough to see the Americans through to the knockout rounds despite a nervy 0-0 draw with Australia to finish the group stage.

The quarterfinals saw a rematch of the 2019 Women’s World Cup final, with the USWNT surviving in penalties after a 2-2 draw with the Netherlands thanks to the heroics of Alyssa Naeher in goal.

In the semifinals, against Concacaf rival Canada, it all fell apart. Jessie Fleming’s game-winning spot kick in the 74th minute saw the Canucks score a rare 1-0 upset over their southern neighbors on the way to beating Sweden for gold in the final. It was Canada’s fourth win in 62 matches against the U.S.

The result left the Americans in the third-place match with Australia, which was a wild one as the U.S. secured bronze 4-3 thanks to two goals apiece from old veterans Rapinoe and Lloyd. Rapinoe scored an audacious olimpico that should have been named Goal of the Year, but the highlight of the match, for me, was the discovery of the budding romance between USWNT’s Kristie Mewis and the Matildas’ Sam Kerr. #sportsmanship

Third place at a major international tournament is nothing to scoff at, but for the USWNT, this felt like failure. Alex Morgan returned from giving birth, Carli Lloyd had put off retirement for the tournament and the reigning World Cup champions were lucky to have mostly healthy players; and yet the U.S. only came home with bronze. (So determined was Lloyd to go out on top, she even tried to win an NWSL title afterward, though that ended in failure as she ended her long career without a league title to her name.)

Without a gold medal to celebrate, the already-scheduled post-Olympic victory tour became a weird Carli Lloyd farewell tour, because who really wants to celebrate third place when you’re the best team in the world? (The USWNT finished No. 1 in the FIFA rankings for a seventh straight year.) Lloyd abused hapless Paraguay in two mostly pointless friendlies. The U.S. was then held to a 0-0 draw with South Korea before sending Lloyd off in style with a 6-0 win over South Korea.

Because the “victory tour” required Andonovski to select Olympic players, it proved disruptive to any attempts at a rebuild. That retooling finally began with a trip to Australia to play two last friendlies of the year, marking four matches between the Mewis and Kerr teams in 2021.

Though Andonovski was unfortunately unable to take Mal Pugh and Trinity Rodman, two of the NWSL’s brightest young stars who both opted out, U.S. fans got a glimpse of the future in the friendlies Down Under. Casey Murphy showed she’s got what it takes to be a dominant No. 1 keeper, Ashley Hatch provided the sort of clinical finishing the U.S. has occasionally lacked since Abby Wambach’s retirement and Lindsey Horan showed she’s more than worthy to take over the vaunted No. 10 jersey.

Meanwhile domestically, the Washington Spirit ended a tumultuous season with the NWSL championship led by Andi Sullivan, Rodman and Hatch. The Portland Thorns, who won the NWSL Challenge Cup and Shield, fell short in the playoffs yet again.

As we head into 2022, the USWNT is not the same team it was a year ago. Carli Lloyd will be the most obvious change, but other older veterans like Megan Rapinoe, Becky Sauerbrunn, Tobin Heath, Christen Press and Krashlyn could soon be phased out as well.

In their stead is a crop of younger players who have shown glimpses of potential but haven’t been given the opportunity to shine at major competitions. Catarina Macario scored three goals in 12 appearances in 2021 and looks to be the real deal, though she’s already 22, having had to wait to make her international debut while switching nationalities. Sophia Smith and Mal Pugh at times looked like the exciting wingers that could send icons like Heath and Press to the role of backup, but neither has been consistent enough to be surefire World Cup starters. Trinity Rodman, 19, looked incredible in the NWSL; how quickly can she translate that to the international level, and will she even choose to go to the 2023 Women’s World Cup after refusing to go to Australia in 2021?

One thing remains the same for the USWNT: the best midfield in the world. With Julie Ertz, Lindsey Horan, Rose Lavelle, Sam Mewis, Andi Sullivan and, when deployed deeper, Macario, no one in the world can stack up to the U.S. in strength and depth in midfield. Andonovski will rely on that midfield as he adjusts the defense and fiddles with the right configuration in attack.

The biggest competition for the USWNT in 2022 is the Concacaf W Championship, which will double as Women’s World Cup and Olympic qualifying.

From a World Cup perspective, it is unfathomable the U.S. will fail to qualify. With the 2023 edition increasing to 32 teams, FIFA gave four berths plus two half-berths to Concacaf. The top two teams from two groups of four qualify automatically, while the third-place teams advance to inter-confederation playoffs where 10 teams will fight for three berths. It would take a catastrophe 100 times worse than the USMNT’s failure to reach the 2018 World Cup for the USWNT to miss the 2023 Women’s World Cup.

More importantly this summer is qualifying for the 2024 Olympics. The winner of the Concacaf W Championship earns a berth to the Olympics and the 2024 Concacaf W Gold Cup (the first time Concacaf has decided to let women play for a Gold Cup). The second Olympics berth won’t be decided until September of 2023, when the second and third-place finishers of the W Championship face off for the final Olympic berth. (Yes, Concacaf and FIFA really have convoluted the qualifying processes, but it’s no different than what’s being done in the men’s game.)

So while Women’s World Cup qualification is almost a certainty, qualifying for the Olympics could require a bit more work. The USWNT is likely to face Canada in the final, and a loss in that match could mean waiting another year to play an improving Mexico squad. (In November, Mexico hosted Olympic champion Canada in two friendlies, winning 2-1 and drawing 0-0.)

What else can we watch out for in 2022? The SheBelieves Cup is likely to return, albeit without England or Canada, who are playing in the inaugural Arnold Clark Cup in England. Otherwise, there isn’t a whole lot currently on the calendar to look forward to, as Concacaf has made the Concacaf W Championship the de facto qualifier for just about everything.

Domestically, NWSL fans will hope for a less troubled season. The 2021 domestic campaign was one of turmoil and upheaval as coach after coach after GM after commissioner was fired or resigned over allegations of abuse and/or harassment. The alleged abuses of Paul Riley, Richie Burke, Rory Dames and many more will stain the league for years to come.

Players will report for the NWSL season starting Feb. 1, with the Challenge Cup running from March 19-May 7. A balanced, 22-game regular season kicks off shortly thereafter before a six-team playoff ends with the NWSL Championship the weekend of Oct. 28. Angel City FC and San Diego Wave FC enter the league as expansion teams in 2022.

Though 2021 wasn’t the best of years, the USWNT finished with a 17-2-5 record, nearly identical to the 17-2-3 mark of the men’s team. A bronze medal means the U.S. women’s national team doesn’t leave the year without a trophy, even if it felt disappointing at the time.

With 2022 merely serving to set the stage for 2023, it will be an intriguing time to see how Vlatko Andonovski builds his team toward the Women’s World Cup in Australia and New Zealand.