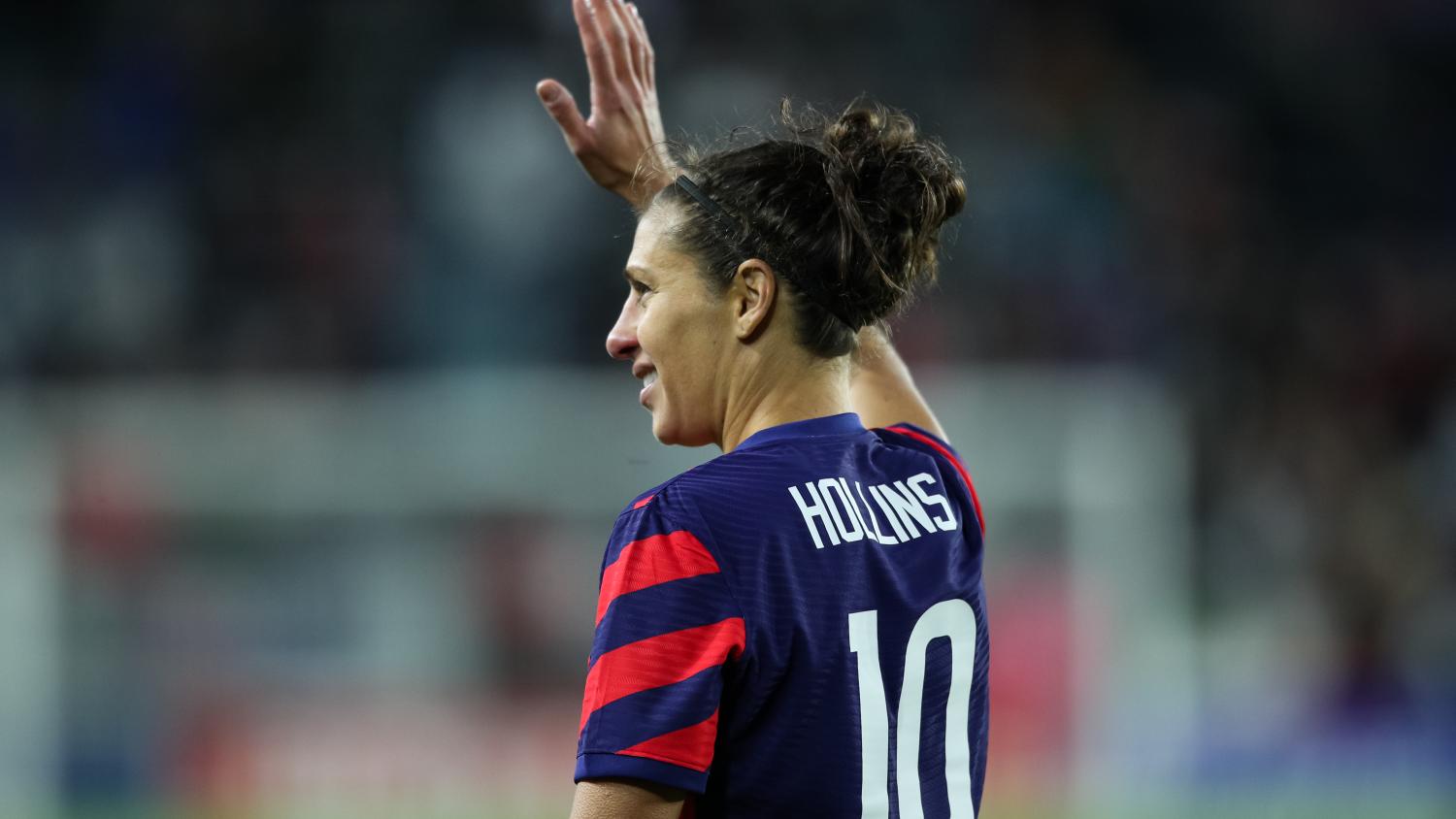 What an epic exit for Lloyd.
Getty Images

Carli Lloyd’s career on the field has already been badass enough. She had one last trick up her sleeve during Tuesday night’s 6-0 thumping of South Korea when she revealed she had played the game (or at least 20 minutes of the second half) with two jerseys on. When her curtain call came, she took off her Lloyd jersey to reveal a Hollins jersey.

Lloyd has been married to her husband, Brian Hollins, since 2016. Hollins and Lloyd have been together since high school and officially tied the knot five years ago. Here was the special moment when Lloyd revealed the second jersey.

@CarliLloyd walks off the field for the last time in a @USWNT jersey pic.twitter.com/GTGo4FzVCb

The Carli Lloyd farewell game was her 316th cap which is the second most all-time. She might not have gotten on the scoresheet Tuesday, but she still finished with the third most in USWNT history with 134 goals.

Lloyd had several chances against South Korea as she led the new era of the women’s team.

The USWNT’s starting lineup was one of the youngest in years. The team’s Twitter account referred to the lineup as “Carli and the kids.” The average age of the lineup (not including Lloyd) was 24.5 years old.

South Korea entered the game with nine of the same starters that featured in the game on Thursday.

Before kickoff there was an emotional farewell ceremony for Lloyd

The USWNT was immediately on the attack from the first whistle. The American youngsters did what their elders couldn’t on Thursday and found the back of the South Korean’s net in the ninth minute. Sophia Smith slipped the ball through to the future USWNT No. 10 Lindsey Horan who got a fortunate deflection.

That pass from @sophsssmith and smooth finish from @LindseyHoran. Her 24th career goal for the #USWNT. pic.twitter.com/86Syqp913x

Lloyd had a fantastic bending shot in the 27th minute that forced 37-year-old goalkeeper Jung-Mi Kim into a diving save.

The first real chance for @CarliLloyd is saved by the keeper! pic.twitter.com/tmUDWrDVhH

The USWNT team was searching for opportunities to feed Lloyd the ball, but some of the best opportunities in the first half came from the departing legend supplying the chances.

Right before halftime the USWNT doubled the lead off a corner with another deflection.

The @USWNT picks up another goal just before the end of the first half pic.twitter.com/hM7wl1LxqW

Early in the second half Lloyd was again denied by the goalkeeper when her header was batted away.

When the clock hit 65 it was the final moment of Lloyd’s historic international career.

The floodgates (the goals not our tears) opened after Lloyd left the field as the USWNT found goals through Alex Morgan, Megan Rapinoe, Rose Lavelle and Lynn Williams.

@alexmorgan13 wasted no time getting on the score sheet for the @USWNT! pic.twitter.com/TQB5UPHmFZ

RAPINOE @mPinoe makes it 4-0 for the @USWNT pic.twitter.com/mZPRfvirh5

The @lynnraenie finish was great, but how about that @TobinHeath set up for the @USWNT? pic.twitter.com/EPYU9zdUUE

After the game there was one last hurrah for Lloyd. Try to hold back the tears everyone.

This is @CarliLloyd, signing off. ⬇️ pic.twitter.com/CZ0841Abdo

17 years and a career for the ages. @CarliLloyd leaves the field in a #USWNT uniform for the final time.#ThankYouCarli pic.twitter.com/lG4N92NNxp