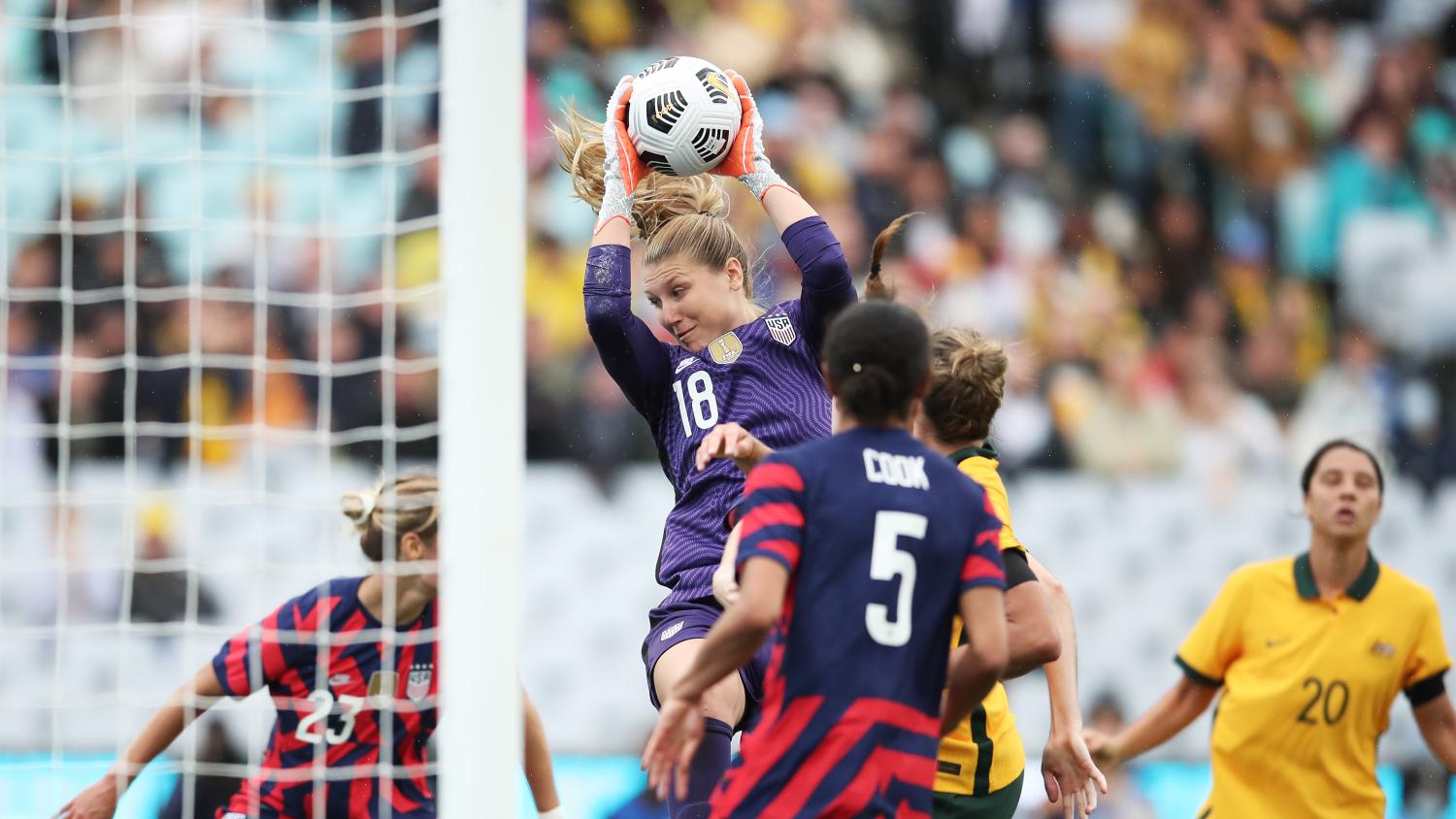 The USWNT beat Australia 3-0 in a friendly thanks to the goalkeeping of Casey Murphy.
Getty Images

The USWNT’s friendly against Australia on Saturday (well, Friday in certain parts of the States), was in many ways a changing of the guard. Lindsey Horan took over the vaunted No. 10 jersey from Carli Lloyd. Alana Cook and Tierna Davidson started together at center back. And Casey Murphy looked like a star in the making between the sticks.

Murphy made eight saves in her first career U.S. start, helping the USWNT blank the Matildas 3-0 on Saturday afternoon in Sydney, Australia.

Much of the attention in Vlatko Andonovski’s roster for the two friendlies against Australia surrounded the absence of the old guard like Lloyd, Megan Rapinoe, Tobin Heath, Christen Press, Alex Morgan and others — some resting, others retiring or on the verge of retiring — and the absence of two young stars in Mal Pugh and NWSL Rookie of the Year Trinity Rodman. Not nearly as much attention was paid to the inexperience at goalkeeper, with the U.S. bringing three goalkeepers with a total of seven appearances between them to Australia.

In the first friendly, Andonovski gave the nod to Murphy, a 25-year-old N.C. Courage keeper. At 6-1, she became the tallest goalkeeper to ever play for the USWNT — and on Saturday she needed every inch of her length to keep the Matildas at bay.

Murphy was superb in goal for the U.S., blocking shots, coming out to grab crosses and being an imposing presence. The one time it looked like she was beat, Kyah Simon fired over the bar from inside the six-yard box.

Shutting out Australia is no small task. The last time these teams played, the U.S. won 4-3 in the Olympic bronze-medal match. Here’s a sampling of the saves Murphy made on Saturday against Australia.

.@CaseyMurph looking like a vet in her first cap pic.twitter.com/2A6NIopzy5

Not since Hope Solo has the USWNT had a dominant goalkeeper. Alyssa Naeher has been great and has had her moments, but she’s never had the fear factor that a Solo or Briana Scurry had. While Naeher is still likely Andonovski’s No. 1 if the World Cup started next week, Murphy made a strong claim to challenge for the starting job, even ahead of Ashlyn Harris, Adrianna Franch and Jane Campbell.

At the very least, it will feel harsh if she didn’t earn herself a second start in the second friendly against Australia on Tuesday.

As for the rest of the squad, it wasn’t always pretty, but you can’t argue with the result.

The starting front three of Lynn Williams, Ashley Hatch and Midge Purce was electric early, using pace and energy to trouble Australia’s young back line. Hatch, only starting because Catarina Macario was unavailable, scored 24 seconds into the match because of her willingness to chase the ball. It was the third fastest goal in USWNT history.

Eventually, Australia settled into the match and looked the better side going into the break but couldn’t find a way past Murphy. Despite all the roster overhaul, the U.S. still had Rose Lavelle and Horan in the midfield, and those two were the difference makers in the second half.

The U.S. made it 2-0 when Purce went beast mode in shrugging off her defender to pick out Lavelle for a first-time shot.

Then Horan drew and converted a penalty to seal the friendly victory.

.@LindseyHoran's 25th #USWNT goal, and first as No. 10 ⚽️ pic.twitter.com/bBtE8CVCVQ

Horan could have felt the weight of the No. 10 jersey in her first match in the shirt, which has only been worn previously by Michelle Akers, Aly Wagner and Carli Lloyd, all legends of the game. But she looked right at home, being her dominant self in midfield, playing offense, defense and being a leader in the middle of the park.

When World Cup qualifying rolls around next summer, the USWNT will look far different from what was on display in Sydney on Saturday. But players like Casey Murphy certainly played themselves into contention to be a on the plane back to Australia for the 2023 Women’s World Cup.