Which World Cup Group Is The Group Of Death In 2018? 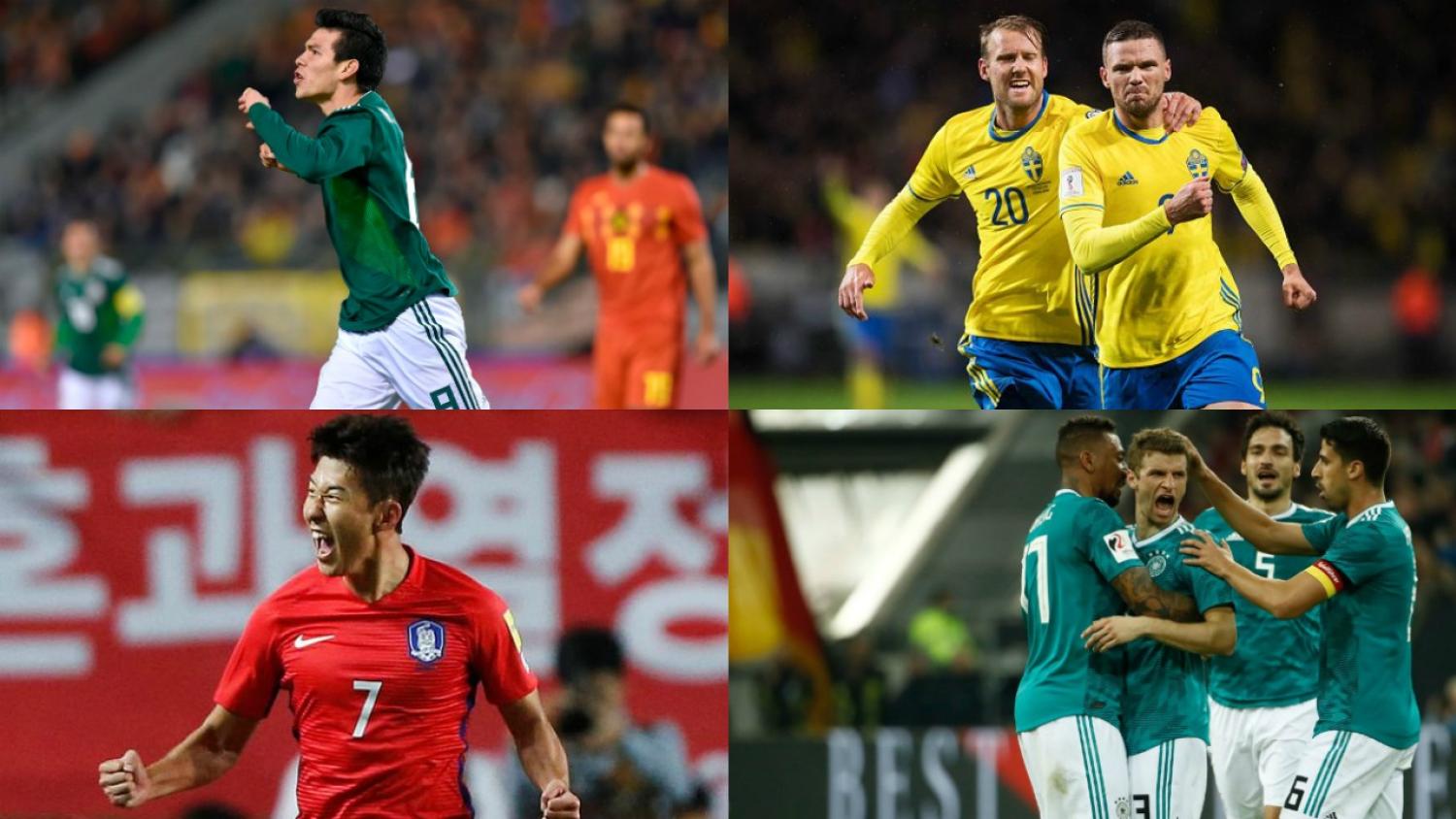 We explore three groups which could be classified as "The Group of Death" at the 2018 FIFA World Cup in Russia.
@BBCSport | @ArnoldcommaJon | @WhoScored | @TottenhamApp | Twitter

With very few exceptions throughout the history of the FIFA World Cup, the vaunted group of death stigma has largely followed a self-same pattern: two extremely strong European nations and two heavy hitters from other confederations.

In 2014, we had two candidates for the group of death, both exhibiting the aforementioned makeup.

In Group B, Spain, the Netherlands, Chile and Australia just battered each other, kicking la Furia Roja to the curb despite their status as the defending world champions.

In Group G, Germany, Portugal, the USA and Ghana experienced a similar trial by fire, leaving Portugal stunned and heading home before the postcards. A heavy hint of death permeated the Copacabana Beach.

Thanks to a change in the draw procedure which saw teams allocated to Pots 2, 3 and 4 based on the October 2017 FIFA World Rankings — rather than the traditional method of filling those pots based on geographical considerations — this particular World Cup isn’t as deathly as those that’ve preceded it.

However, there are still three groups in Russia that follow the formula previously laid out. While each of these groups feature two nations that almost everyone will immediately pencil through to the Round of 16, I would swear on my daughter’s life that it won’t play out like that.

Which World Cup Group Is The Group Of Death In 2018?

Can Messi do it all by himself in Russia? Photo: @BarcaTimes | Twitter

With Messi in qualifying, Argentina played ten matches and only lost once (to Brazil in Belo Horizonte). Messi scored seven goals in those games, including the heroic hat-trick against Ecuador which secured Argentina’s place.

Without Messi, Argentina played eight matches in qualifying. They won one. They scored 0.75 goals per game. They lost to Ecuador, Paraguay and Bolivia. They drew with Venezuela. They sacked Tata Martino and Edgardo Bauza.

Now, Jorge Sampaoli has been brought in to solve for the over-reliance on Messi and to figure out some kind of balance between defense, midfield and attack (a riddle that doomed his predecessors).

As Messi goes, this Argentina side go. But the good news there is that Messi is pretty much unstoppable, so la Albiceleste could very well win it all. 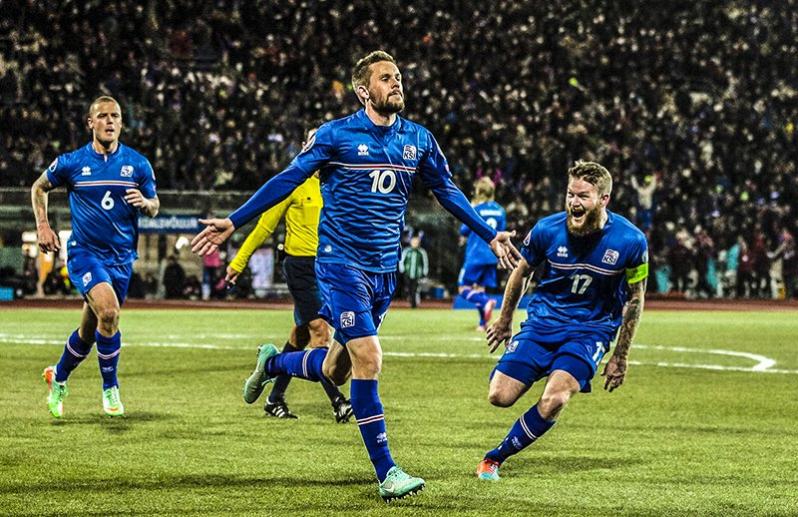 Why they’re deathly: Iceland are so much more than a tiny volcanic island with a fun “Viking Clap” cheer. As they showed at Euro 2016 and throughout qualifying (when they topped an extremely difficult group containing Croatia, Ukraine and Turkey), this side is for real.

While casuals will delight in the sounds of Ragnar Sigurdsson, Aron Gunnarsson, Gylfi Sigurdsson, Birkir Bjarnason and Kolbeinn Sigporsson, the fact of the matter is that these are all exceptionally talented footballers (however, Gylfi Sigurdsson’s knee injury is a major concern for the nation).

Iceland will be strongly backed by their own fans and Russian neutrals wherever they go, and manager Heimir Hallgrimsson has shown that he’s the ideal man for the job. 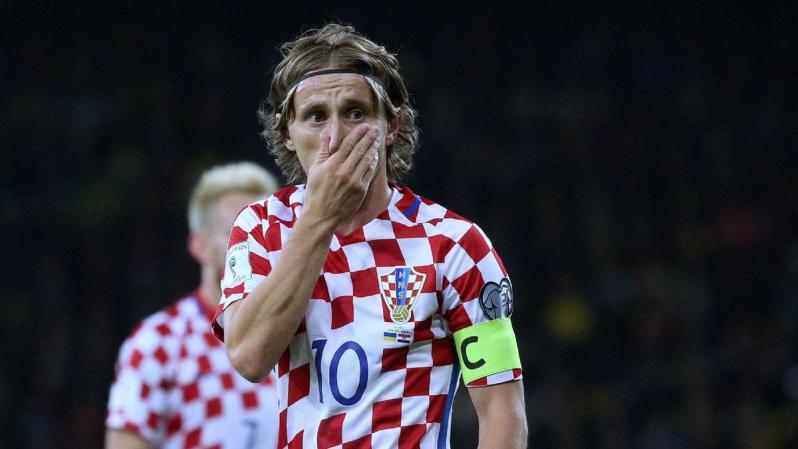 Why they’re deathly: With Barcelona’s Ivan Rakitic, the Real Madrid duo of Luka Modric and Mateo Kovacic, Inter’s Ivan Perisic and Juventus’s Mario Mandzukic, this is something of a golden generation for Croatia.

However, with Iceland leading their qualifying group, manager Ante Cacic was sacked and replaced by Zlatko Dalic. They took Greece to the cleaners in the playoff, winning 4-1 in Zagreb, and their class was recently on display in a 1-0 victory over Mexico in front of 80,000 El Tri supporters at AT&T Stadium in Texas.

As evidenced by their 2-1 victory over Spain at Euro 2016, the sky’s the limit for this side. However, a pretty dire 1-0 defeat to Portugal in the Round of 16 also showed how wildly inconsistent they are.

Finally, they have the best kits in the world. 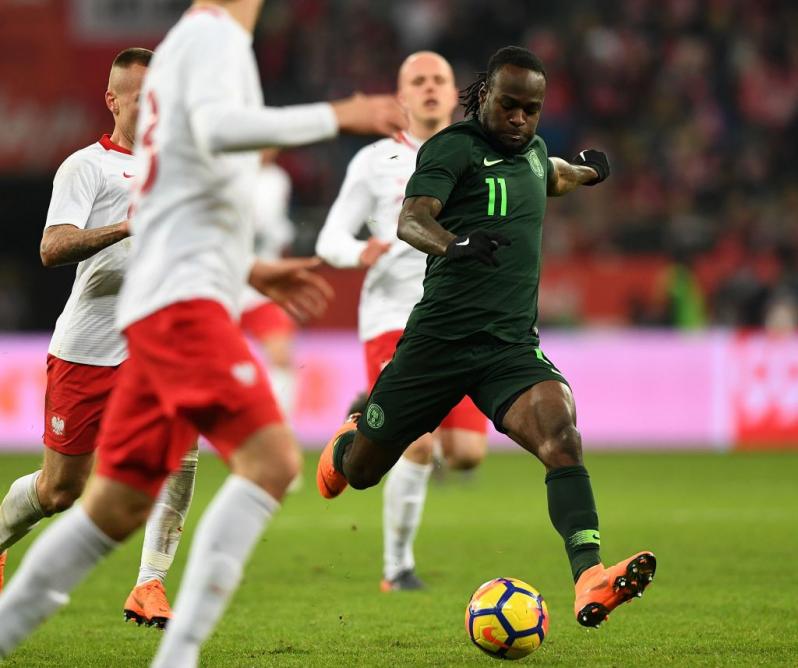 Why they’re deathly: With Chelsea’s Victor Moses, Arsenal’s Alex Iwobi, the Leicester City duo of Kelechi Iheanacho and Wilfred Ndidi and ever-present midfield captain John Obi Mikel, Nigeria are capable of playing with anyone on their day.

Their results in qualifying testify this: they became the first African nation to qualify after winning four of their opening five matches, and the country's only "defeat" was the result of fielding an ineligible player (FIFA then awarded Algeria a 3-0 win).

The future is exceptionally bright for the Super Eagles, as evidenced by their bronze medal at the 2016 Olympic Games. 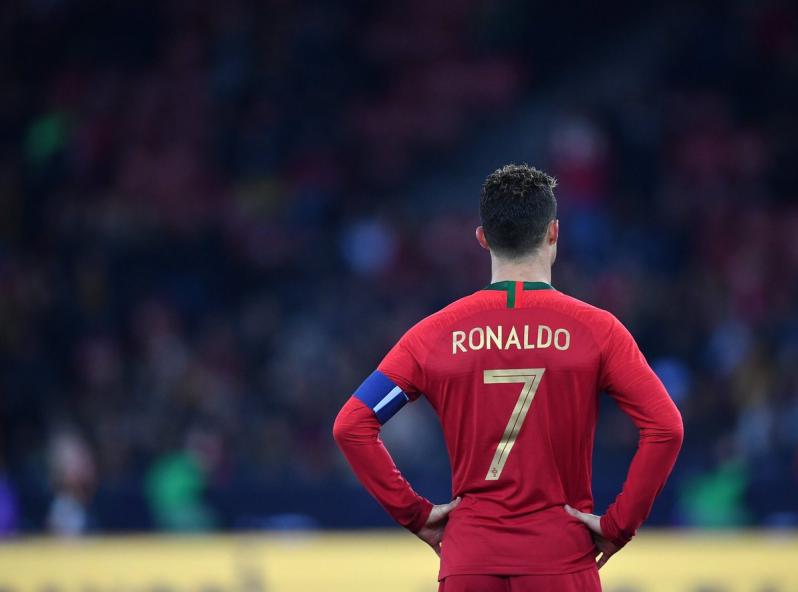 Why they’re deathly: The 2016 European champions boast a miserly defense anchored by some wily veterans and attacking brilliance highlighted by the likes of Cristiano Ronaldo, Andre Silva, Bernardo Silva and Ricardo Quaresma.

As showcased in their EURO triumph, they are hellishly difficult to beat. With Cristiano Ronaldo captaining the side, they’ve also got a swagger in big games, evidenced by their all-important 2-0 qualifying victory over Switzerland last October.

Having said that, this is an obviously limited side. There’s not a lot of depth here, and that problem is currently rearing its ugly head in midfield. After winning the Young Player of the Tournament award in France, Renato Sanches has since fallen off the face of the planet while Andre Gomes wishes he could do the same at Barcelona.

Ultimately, this is Cristiano Ronaldo and 10 extremely competent and technically gifted footballers — on the whole, a beast that you really don’t want a part of. 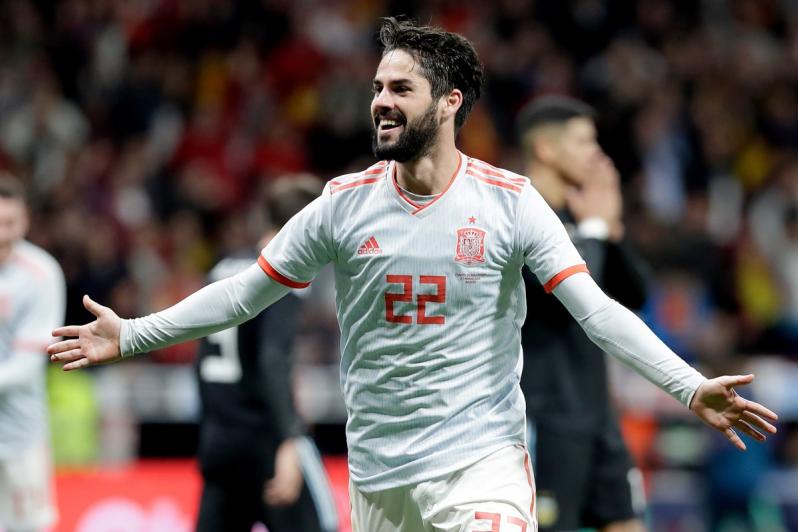 Is Isco the new face of Spain? Photo: @SuperSportTV | Twitter

Why they’re deathly: A little while back, the three nations most commonly mentioned as World Cup favorites were probably Germany, Brazil and France. However, after taking Italy to task in qualifying and thumping Argentina 6-1 in a friendly (taking their unbeaten streak to 18 games), Spain are suddenly the favorites in the eyes of many.

In defense and midfield, the squad is absolutely stacked. Spain boasts the world’s best keeper, David de Gea, a backline/midfield that’s the Real Madrid + Barcelona + Atletico All-Star team and then the additional talents of David Silva and Thiago Alcantara.

The main question concerning Spain is who operates at the forward position? Alvaro Morata has struggled since transferring to Chelsea and Diego Costa is in the midst of his own slump at Atletico (just three goals in 13 LaLiga games).

The good news for Spain is that the country essentially invented the False 9 position and all its players are capable of doing pretty much anything. 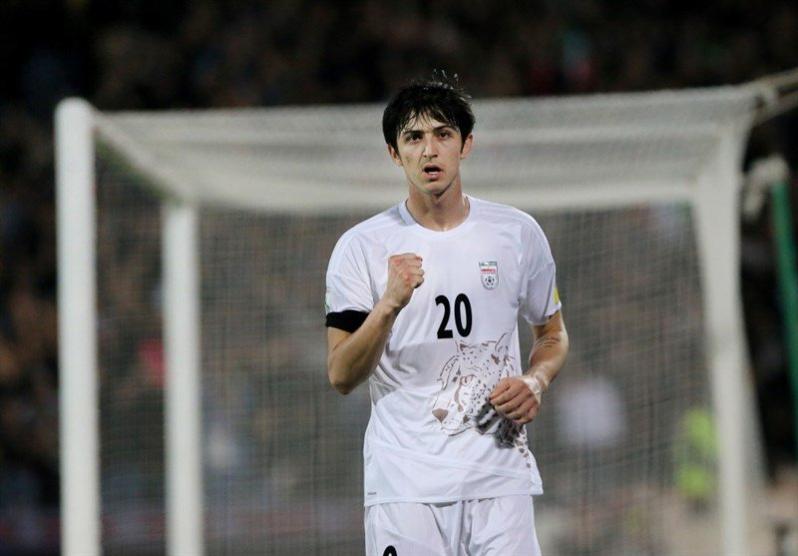 Why they’re deathly: Iran began 2018 World Cup qualification as Asia’s highest-ranked side, coming in at 51. They then went through the grueling 18-game qualifying cycle as the only nation not to lose a single match. For how very little you and I know about this side, that’s extremely impressive.

They are managed by a man you might remember, Carlos Queiroz — the longtime Manchester United assistant under Sir Alex Ferguson who also managed Real Madrid for 10 months and the Portuguese national team.

Iran is obviously short on star power, but they boast an impressive collection of players cutting their teeth in Europe. At the age of 23, Sardar Azmoun — who plays for Rubin Kazan — is already the nation’s fifth highest goalscorer with a return of 23 goals in only 31 matches. 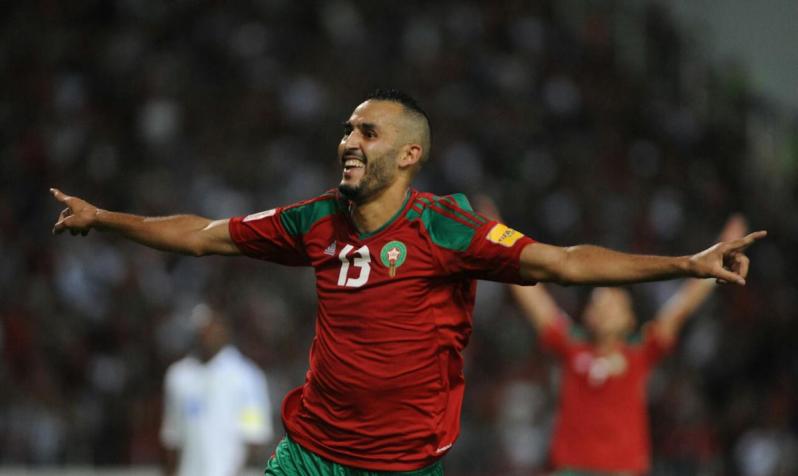 Why they’re deathly: Placed alongside the always formidable Ivory Coast and Pierre-Emerick Aubameyang’s Gabon in the cutthroat qualifying of CAF, Morocco went unbeaten in six games without surrendering a goal. The 2026 World Cup-hosting hopefuls were quarterfinalists at AFCON 2017, and they’ve defeated both South Korea and Serbia in recent friendlies.

What makes Morocco such a difficult side to pierce? Look no further than captain Medhi Benatia. The 31-year-old is a consistent performer for Juventus after successful spells with Udinese, Roma and Bayern Munich.

Morocco will be classified as the traditional group whipping boys, but don’t expect any nation in this group to run riot against the Lions of the Atlas. 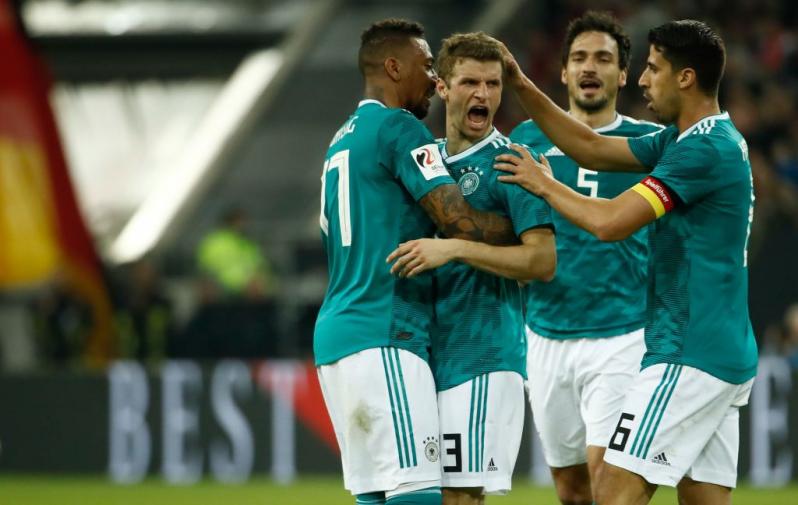 Why they’re deathly: Where to begin? The defending world champions have really only experienced one blip since lifting the trophy in Brazil — a 2-0 defeat to hosts France in the semifinals of Euro 2016.

However, they’ve since regrouped and ran riot in qualifying while destroying the likes of Northern Ireland, the Czech Republic and Norway. Last summer, Germany’s absurd squad depth was on full display when the B-team thumped a full-strength Mexico and defeated back-to-back Copa America champions Chile en route to winning the Confederations Cup.

What’s more, the U-21 team (effectively the C-team) defeated Spain in the final of the 2017 UEFA Euro U-21s. These guys go from strength to strength with an absurd crop of goalkeepers, Bayern Munich’s defense, the likes of Toni Kroos, Mesut Ozil and Leroy Sane in midfield and Thomas Muller up top.

Muller has scored five at each of the tournaments he’s participated in, and he could conceivably score seven in Russa — a total that would take him above compatriot Miroslav Klose as the World Cup’s all-time leading goalscorer. 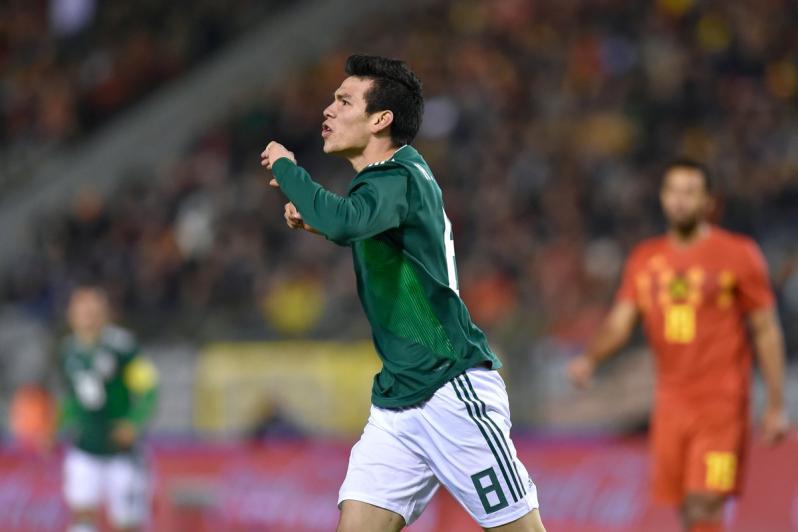 Why they’re deathly: Mexico navigated the always tricky CONCACAF Hex with ease, only losing one match (and that’s when they needed to, knocking out the USMNT in the process). Manager Juan Carlos Osorio has been a notorious tinker man since being appointed back in October of 2015, but the positive spin is that he’ll be well aware of his pool’s strengths and weaknesses come June.

Mexico has some remarkable experience in players like Memo Ochoa, Hector Moreno, Miguel Layun, Andres Guardado and Javier Hernandez, but all eyes will be on 22-year-old PSV sensation Hirving “Chucky” Lozano, a dynamic winger who’s scored 19 goals in his first European club season. 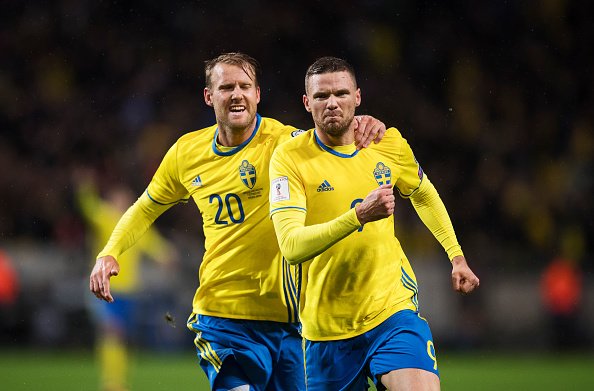 Why they’re deathly: Shockingly, both the Netherlands and Italy missed out on the 2018 World Cup — why? Sweden. The Swedes trumped the Netherlands to the runners-up position in UEFA Group A (it should also be noted that they defeated France 2-1 in Solna), and then they shocked the world by defeating Italy 1-0 on aggregate in the playoffs.

This was no fluke. Sweden blend an experienced core of players that’ve been playing together since the 2009 UEFA U-21s with an exciting crop of new talent that lifted the 2015 UEFA U-21 trophy together (Sweden’s first-ever title in a UEFA youth competition).

Many will view Sweden’s unwillingness to welcome Zlatan Ibrahimovic back into the fold as a mistake, but forwards Marcus Berg, Ola Toivonen, Isaac Kiese Thelin and John Guidetti embody the spirit of this Swedish side perfectly: they’re all selfless, remarkably committed and habitual over-achievers when it comes to international duty. 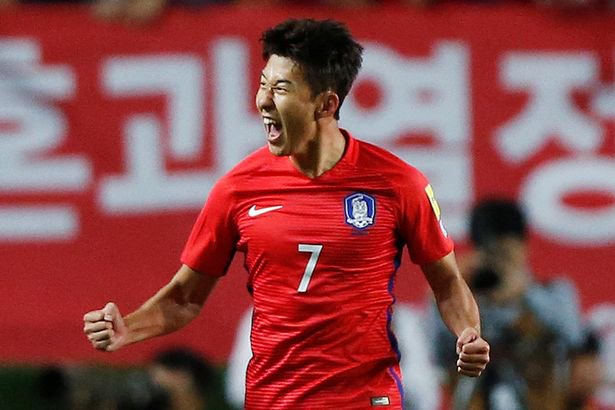 Son is one of the world's best. Photo: @TottenhamApp | Twitter

Why they’re deathly: After cruising through the second round of AFC qualifying, South Korea had their fair share of hiccups in the third. Defeats to China and Qatar (resulting in the sacking of German manager Uli Stielike) massively lowered expectations for the Reds, but there’s still a lot to like here — primarily world-class attacking talent Son Heung-min.

Son has flourished since his move to Tottenham, and the 25-year-old approaches Russia on the back of another hugely influential season in England.