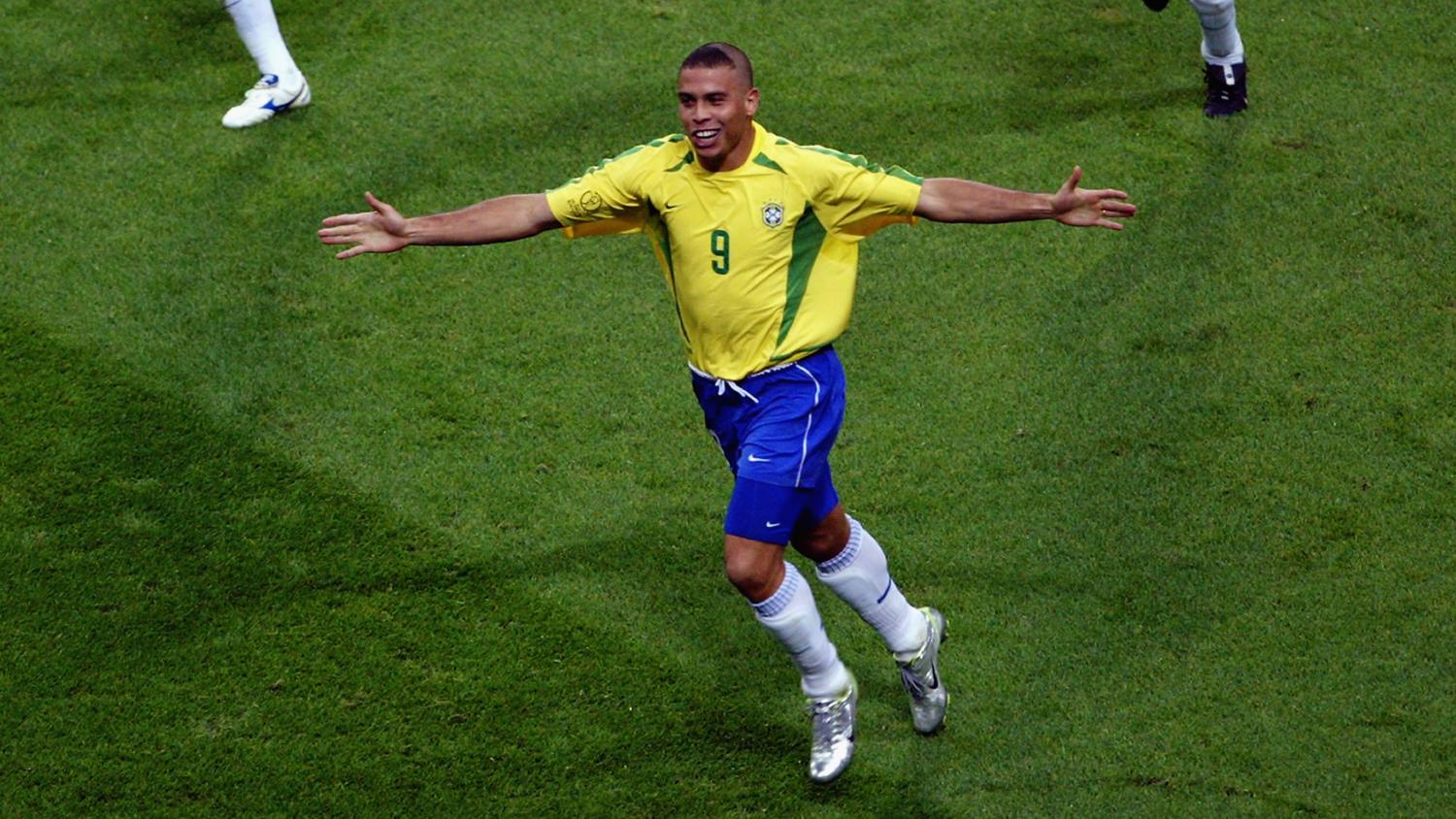 These are the 20 most prolific goal scorers in the history of the FIFA World Cup.
Getty Images

As a competition that traces its roots back to 1930, not many sporting events do trips down memory lane quite like the World Cup. The history of the World Cup, like history itself, is written by the winners, and you won’t lift the most prestigious trophy in sports without a bonafide goalscorer. So who are the FIFA World Cup top scorers of all time?

While the likes of James Rodriguez, Lionel Messi, Neymar, Wesley Sneijder and Diego Forlan have dazzled at recent tournaments, none of them feature in this list of the 20 most prolific World Cup top scorers of all time.

*When able, ties have been settled by goals per game average. 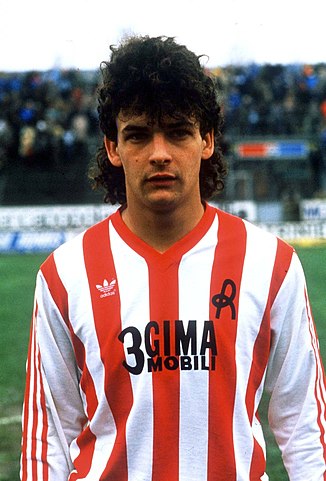 Roberto Baggio only scored two goals at his first World Cup in 1990 and was primarily used only as a substitute, but his strike against Czechoslovakia is regarded as the goal of the tournament.

At USA ’94, he led Italy to the final after scoring five goals and being named to the All-Star Team. However, the lasting image will be his decisive penalty miss against Brazil in the final.

He added two more goals at the 1998 tournament, putting him alongside Paolo Rossi and Christian Vieri as Italy’s most prolific World Cup scorers. 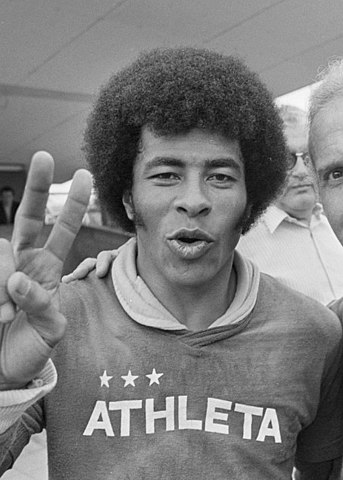 Jairzinho is most widely remembered for his performance at the 1970 World Cup, when Brazil won it all and he scored in every single match. He finished with seven goals and earned the nickname “World Cup Hurricane.”

#Jairzinho received the pass from deep and ran all of his own to score one of the best goals of #WorldCup 1970. Jairzinho was known as the hurricane & on the right wing he terrorized the opponents with his pace and skill. @BrazilEdition @CBF_Futebol pic.twitter.com/iPbgEIGPMS

He also scored twice at the ’74 World Cup. 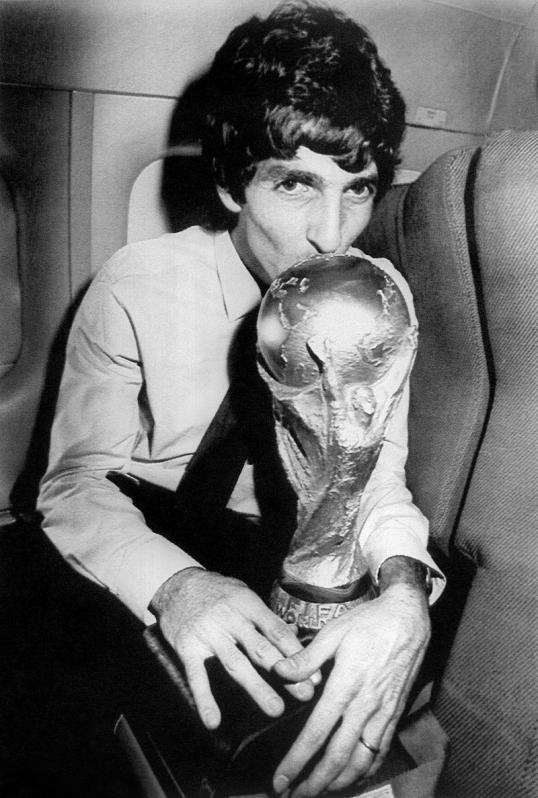 Rossi with the the World Cup Trophy

In ’78, Paolo Rossi outlined his standing as one of the world’s best forwards by scoring three goals and adding four assists, collecting the Silver Ball as the tournament’s second best player.

In ’82, he performed even better. He helped Italy to their third world title by transforming into a monster as the tournament went on. He scored a hat-trick in Italy’s scintillating 3-2 victory over Brazil, added a brace against Poland in the semis and scored in the final against West Germany. He was awarded the Golden Boot as the top scorer and the Golden Ball as the best player.

He was selected for the ’86 Cup but didn’t play because of injury.

A legend of the 21st century, David Villa’s total of 59 goals in 98 appearances for Spain makes him the nation’s all-time leader.

He scored three goals at the ’06 World Cup and then was instrumental to Spain’s triumph in 2010. In South Africa, he scored five goals and also became Spain’s all-time leading scorer at the World Cup.

He added one more in 2014 against Australia. 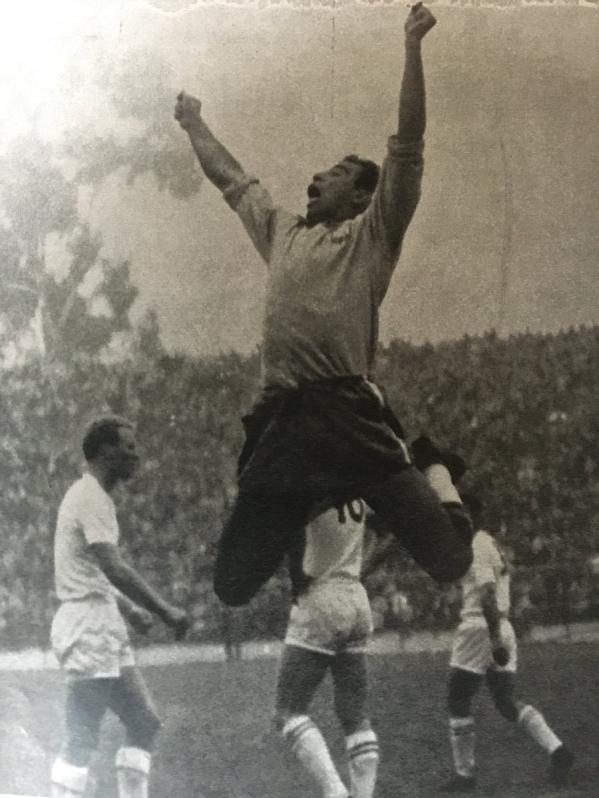 Brazilian Vava stands in rarefied company as a two-time World Cup champions and as one of only four players to have scored in the final of two different World Cups. The only other players to have achieved this feat are Pele, Paul Breitner and Zinedine Zidane.

In ’62, he won the Golden Shoe award with four goals. 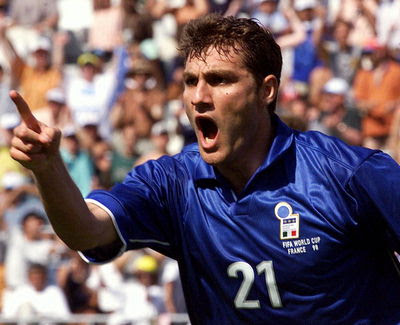 A legend of Inter Milan, Christian “Bobo” Vieri remains tied with Roberto Baggio and Paolo Rossi as Italy’s highest ever goalscorer at the FIFA World Cup. In ’98, he partnered Baggio and scored in four of Italy’s five matches (although he also scored his penalty in the Azzurri’s 0-0 shootout defeat to eventual champions France).

In 2002, he netted another impressive return of four goals in four games. 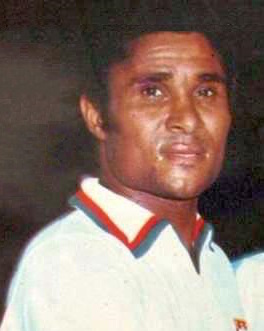 Up until the emergence of Cristiano Ronaldo, Eusebio was undoubtedly Portugal’s finest footballer. The Benfica legend only ever appeared in one finals, England ’66.

But he finished top goalscorer at that tournament with nine goals (one against Bulgaria, two against Brazil, four against North Korea, one against England and one against the Soviet Union). Portugal would finish third, a mark they have yet to better.

Eusebio blast against Brazil at the '66 World Cup. Magic! pic.twitter.com/QM5zXEcgaA 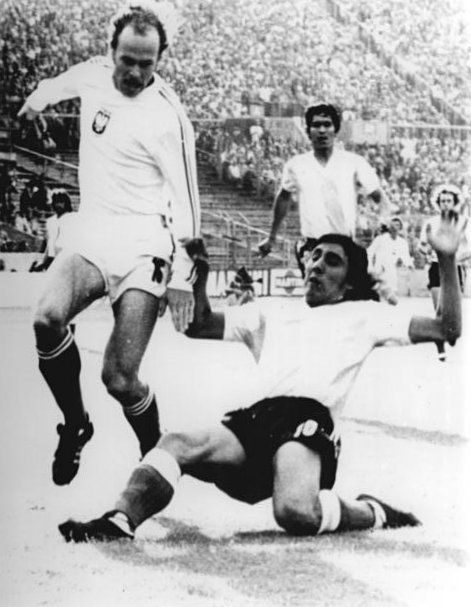 The only Polish player to ever win the Golden Boot at a World Cup, Lato’s seven goals at the ’74 tournament propelled his nation to a third place finish. 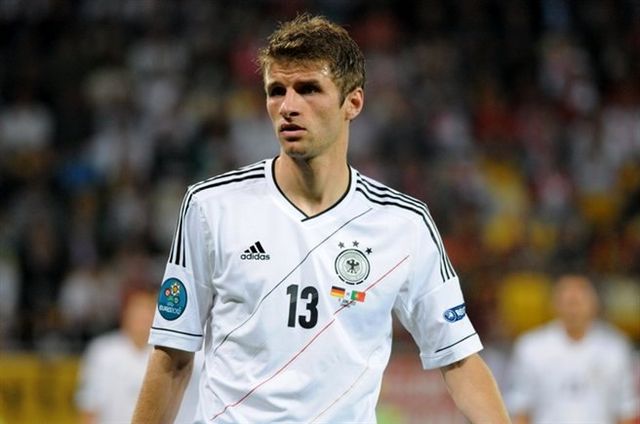 Based on what he’s accomplished in only two World Cups, Muller could possibly challenge compatriot Miroslav Klose as the tournament’s all-time leading scorer over the course of the 2018 event.

In 2010, he won the Golden Boot with five goals and three assists. In 2014, he helped Germany to the title with another five goals — this time good enough for the Silver Boot. 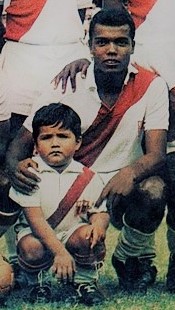 The jersey alone will give you chills.

Regarded by many as Peru’s greatest ever player, Cubillas stands alongside Miroslav Klose and Thomas Muller as one of only three players to score five or more goals at two different World Cups.

He won the Young Player Award at the ’70 tournament while scoring five goals and he accomplished that same total in ’78, finishing joint-second highest behind Mario Kempes.

Happy birthday to the ‘Pele of Peru’ Teofilo Cubillas.

Here’s his famous outside of the boot free-kick against Scotland at the 78 World Cup #Peru #Scotland #WorldCup #Cubillas pic.twitter.com/p73jZ7Bso4 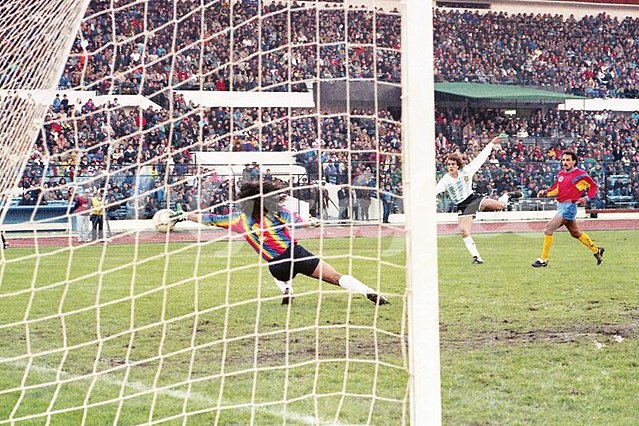 Batistuta had a hammer for a foot.

If Lionel Messi had Gabriel Batistuta in his side, Argentina would’ve never lost a game. Batistuta scored 54 in 77 for la Albiceleste, and the Fiorentina legend delivered at World Cups as well, becoming the first player to score a hat-trick in two World Cups (against Greece in ’94 and Jamaica in ’98). 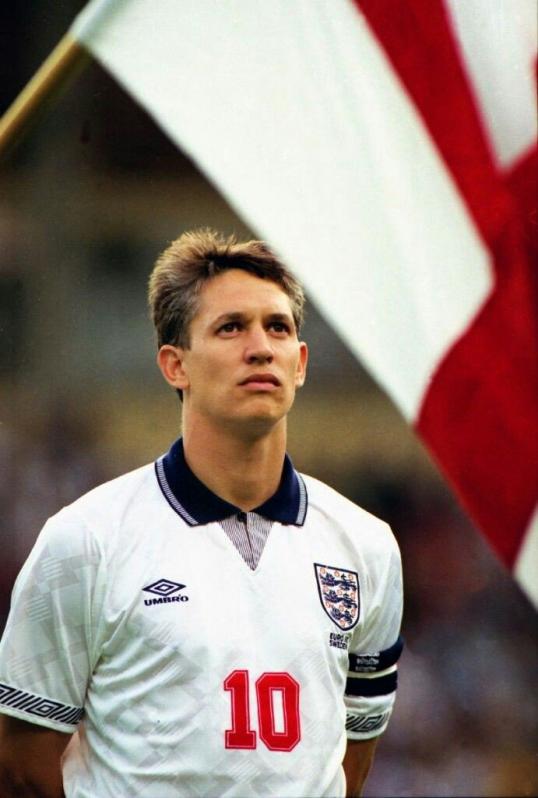 Gary Lineker is the only Englishman to have ever won the Golden Boot, having secured this achievement at the 1986 World Cup by scoring six goals. When Argentina defeated England 2-1 with Diego Maradona scoring the “Hand of God” goal and the “Goal of the Century,” it was Lineker who recorded England’s solitary strike.

He made an indelible mark at the ’90 World Cup as well, shitting his pants against Ireland, scoring four goals — including one against West Germany in the semis — and famously saying after that match: “Football is a simple game; 22 men chase a ball for 90 minutes and at the end, the Germans win.” 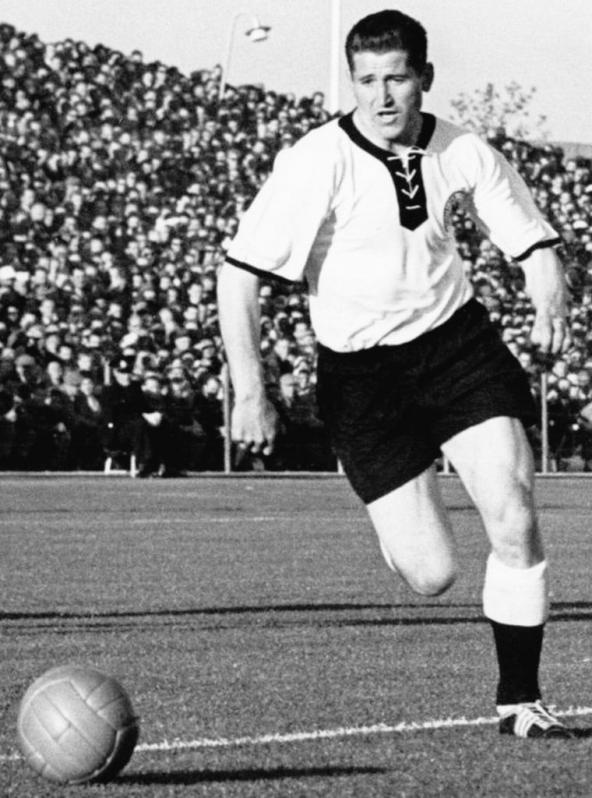 The hero of the Miracle of Bern. Photo: @thecentretunnel | Twitter

With 10 goals in 10 games, Helmut Rahn boasts one of the best World Cup strike rates of all-time. However, none were bigger than the two he scored in the 1954 World Cup Final against a Hungary side that hadn’t lost a single match in four years.

Accordingly, Rahn is the main protagonist in a match that’s now referred to as the Miracle of Bern. 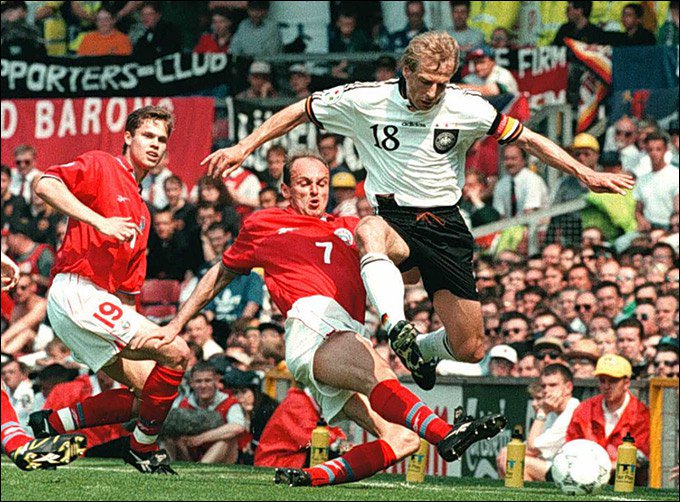 Klinsmann’s first World Cup for West Germany was his most memorable, helping the team to the trophy while delivering a sensational performance against the Netherlands in the Round of 16 and finishing with three goals.

In ’94 he added five goals and in ’98 three, becoming the first player ever to score at least three goals in three consecutive World Cups (a feat later matched by both Ronaldo and Klose). 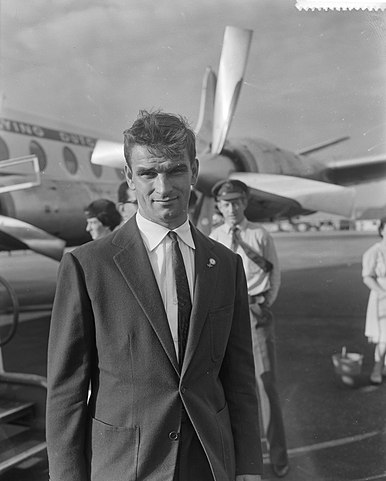 Well, you won’t see a better goals per game average than this: 2.20. Sandor Kocsis led Hungary to the final of the 1954 World Cup after scoring three against South Korea, four against Germany, twice against Brazil and twice against Uruguay.

At the club level, Kocsis would play for Barcelona between 1958 and 1965, scoring 82 goals in 126 appearances for the Blaugrana. 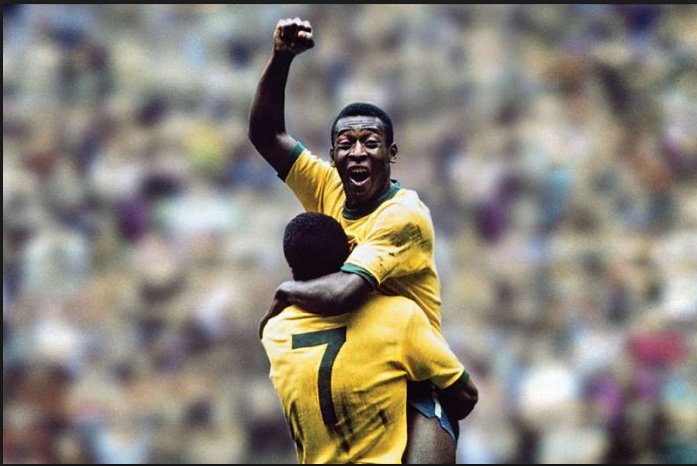 Pele celebrates his goal in the 1970 final. Photo: @FutbalTweets | Twitter

With three World Cup titles (’58, ’62 and ’70), many regard Pele as the finest international footballer of all-time, if not the greatest, period. In ’58, Pele finished with six goals and, at the tender age of 17, was named the tournament’s best young player. His flick and volley against Sweden in the final is still remembered as one of the finest solo goals of all-time.

In ’62, Pele scored in the opening match against Mexico, but an injury in game number two against Czechoslovakia ended his tournament prematurely. ’66 was similar in that persistent fouling again ended his tournament early (although he did manage to become the first player to score in three straight World Cups).

But Pele would have his vengeance in 1970, winning the tournament’s Golden Ball award while scoring four goals, including a goal and an assist in Brazil’s 4-1 final demolition of Italy. 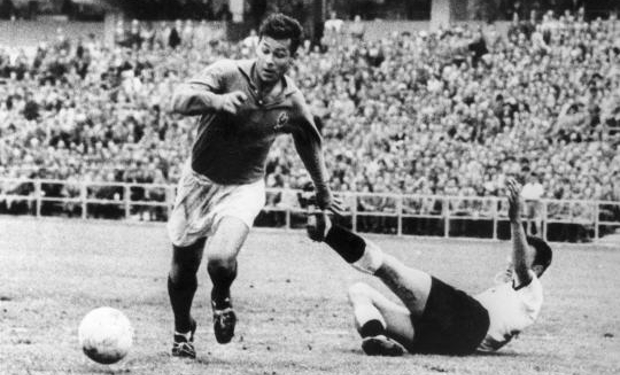 The treatment you get when you score 13 goals at one tournament.

If you’re wondering who’s scored the most goals in a single World Cup tournament, it’s Frenchman Just Fontaine. At the 1958 World Cup in Sweden, Fontaine scored three against Paraguay, two against Yugoslavia, one against Scotland, two against Northern Ireland, one against Brazil and four against West Germany.

French striker, Just Fontaine, still holds the record for most goals at a single World Cup. He scored 13 in 1958 - including hattricks against Paraguay and West Germany. pic.twitter.com/UlSpfVWhdJ

For the sake of comparison, the performance of Pele at that tournament is more widely remembered since Brazil won it all — he finished joint second-highest scorer with six. 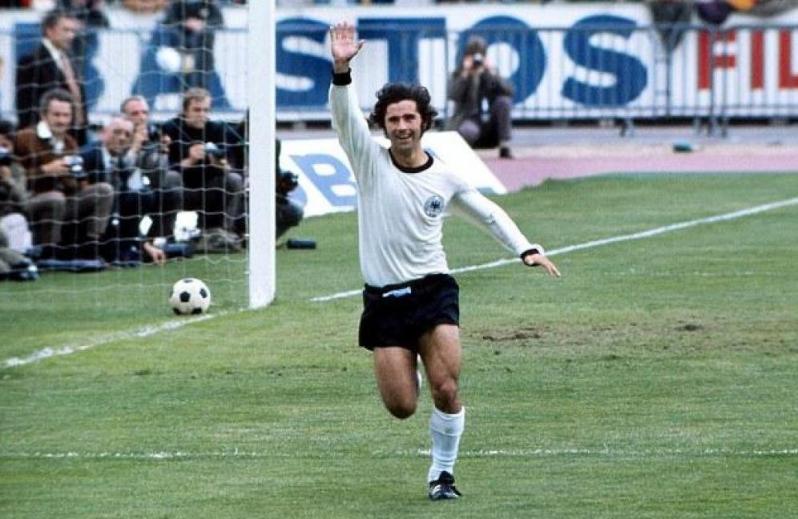 For 32 years, Gerd Muller held the record as the World Cup’s all-time leading scorer. He managed the feat despite only playing in two World Cup. In 1970, he recorded a ridiculous return of 10 goals in six games.

In 1974, he helped West Germany win the title by scoring four goals in seven matches, including the game-winning goal against the Netherlands in the final. 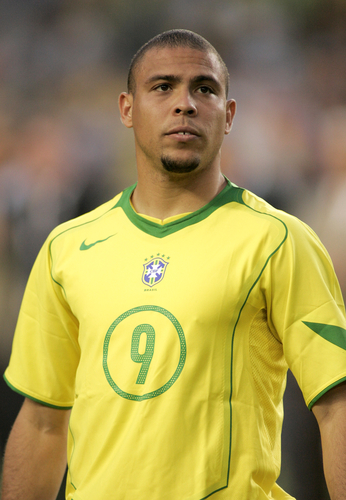 A talent unlike anything the world has ever seen.

Ronaldo made Brazil’s 1994 squad as a 17-year-old but didn’t play, and although "O Fenômeno" managed three goals at the 2006 World Cup, injuries and weight issues had made him a shadow of his former self.

However, nobody will ever forget the ferociously talented footballer that dominated the ’98 event and the remarkable redemption story that captivated the world in ’02.

FIFA #WorldCup Rewind @Ronaldo was at his electric best at France 1998, playing his part in seven goals!

Where does he stand in your all-time best strikers?

We're showing the Final in full on Friday at 16.00CET on Facebook
https://t.co/uzMtTkvxsV pic.twitter.com/gXKEgBX9vi

In ’98, Ronaldo’s freakish combination of power, pace, skill and finishing ability led to four goals and three assists before the final at the Stade de France. His mysterious illness and prematch seizure led to disappointment, but Ronaldo would have his moment four years later.

Despite tearing his cruciate ligament in 2000, Ronaldo led Brazil to its fifth world title in 2002 while scoring eight goals, including two on the previously unbeatable Oliver Kahn in the final.

When it comes to discussing the greatest footballers of all time, Miroslav Klose rarely ever warrants a mention, but his international record is truly outstanding. With 71 goals in 137 appearances for Germany, very few strikers in the modern era come close to matching Klose’s rate of scoring. What’s more, he always delivered on the biggest stage.

At his first World Cup in 2002, Klose scored five goals, all of them from headers (the first footballer to ever achieve such a feat). He finished as joint second-highest scorer alongside Rivaldo.

In 2006 he again scored five goals to finish as the tournament’s Golden Boot recipient. In 2010, he scored four goals, including strikes against Australia, England and Argentina.

In 2014, his goals against Ghana and Brazil ultimately helped Germany to the title, and he also became the competition’s all-time top scorer, the third player in history to score in four different World Cups and the first player ever to appear in four consecutive World Cup semifinals.

Most footballers would be happy with just one of Klose’s tournaments; he delivered on four separate occasions.

I've set all of Miroslav Klose's 16 World Cup goals to 'Closer Than Close' by Rosie Gaines.