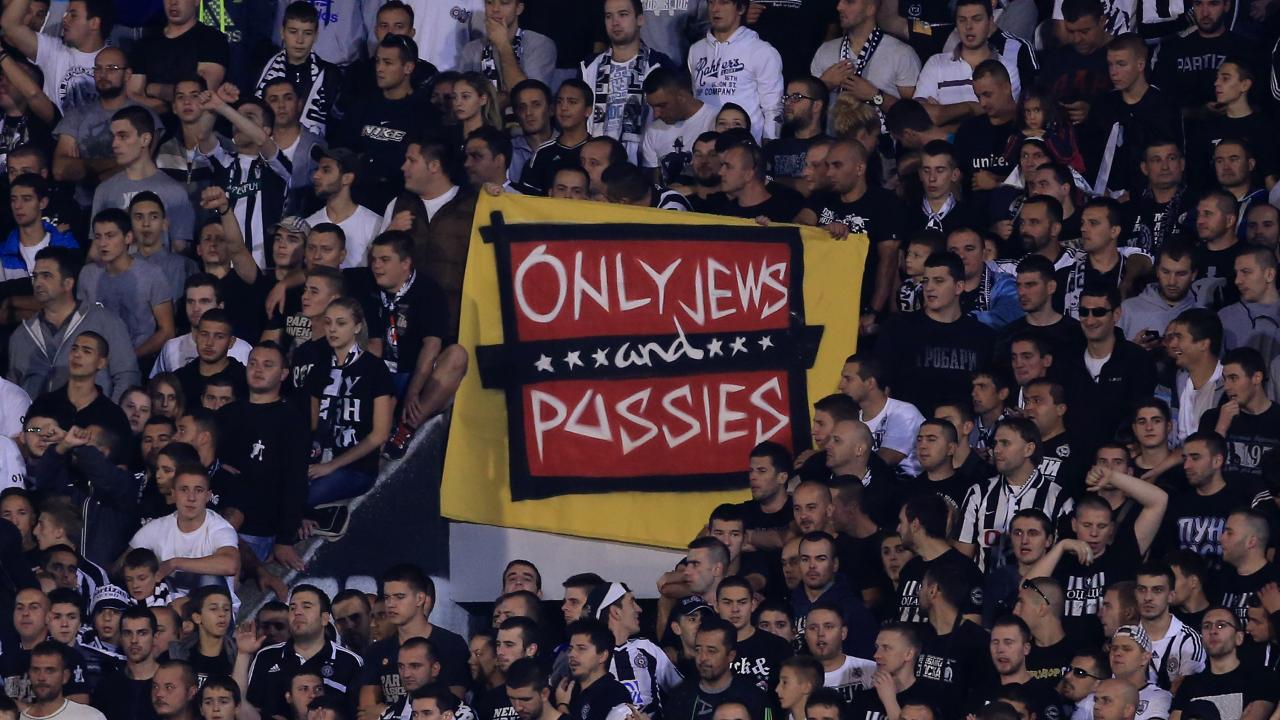 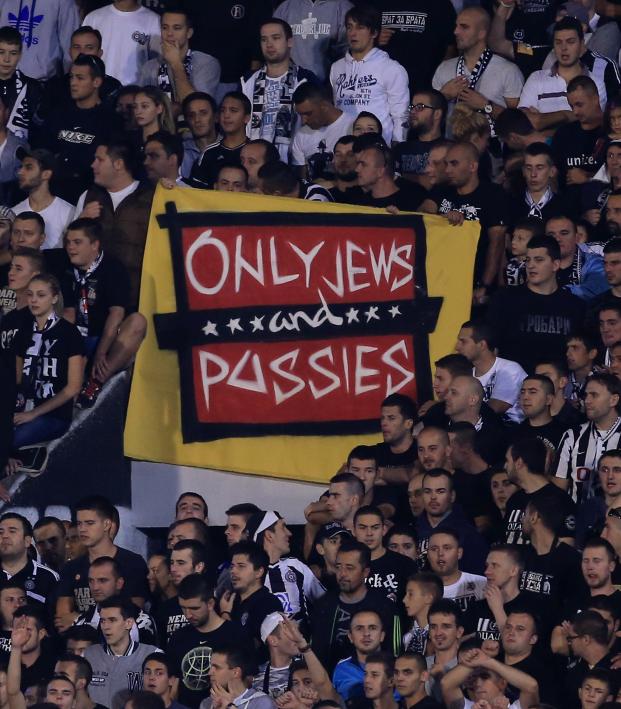 If NASCAR Can Ban The Confederate Flag, Soccer Can Eradicate These 5 Symbols Of Hate

Travis Yoesting July 9, 2020
Soccer must do more to banish these discriminatory acts from the beautiful game.

Last month, NASCAR finally banned Confederate flags from racetracks around the country, saying the symbol runs contrary to the organization’s commitment to a welcoming and inclusive environment for all fans. It got us thinking: What discrimination in soccer still exists that needs to be eradicated from the beautiful game?

Following the murder of George Floyd by Minneapolis police, the Black Lives Matter human rights movement gained renewed vigor across the U.S. and around the world. This forced a reckoning in many organizations, which took a second look at how people of color are treated.

NASCAR, for one, realized black people buy products advertised on racecars too, to borrow an old Michael Jordan quote. While many see the Confederate flag as a point of pride and history, the simple truth is that the Anti-Defamation League lists it as a hate symbol, which has no place in sports.

But NASCAR doesn’t have a monopoly on hate in sports. Soccer has a long and troubled history with racism, sexism, homophobia and religious intolerance. (We’re a soccer website so we’re focusing on soccer, but make no mistake there’s plenty of hate to go around in other sports, from the Washington NFL team’s name to the racist co-owner of the WNBA’s Atlanta Dream.)

Here are five instances of discrimination in soccer that need to be kicked out of the beautiful game.

Content warning: Some of the below language and imagery is offensive. We only show it to highlight the necessity to banish it from the sport.

Discrimination In Soccer In 2020

For years fans in North America have used an anti-gay chant to taunt opposing goalkeepers, and it’s long past time for it to be eradicated from the beautiful game.

The “puto” chant is a homophobic slur (slang for a male sex worker) yelled when a goalkeeper restarts play, usually on a goal kick. It’s particularly popular among fans in Mexico and fans of the Mexico national team, but prevalent at many matches in North and South America.

@NYCFC should be ashamed! Glad to be a NY Red Bull's fan! Won't hear that at RBA. #NYisRED #NYCvRBNY #MLS pic.twitter.com/rby2L3ytNy

The Mexican Football Federation finally started trying to stop fans from using the offensive chant in recent years after FIFA made it clear El Tri could face point deductions from World Cup and World Cup-qualifying matches. For the first time, a Liga MX match was halted when fans continued to shout the slur last fall.

But to just blame Mexico is to ignore how widespread the chant has become, especially in Central and South America. Nor is this the only instance of homophobia in soccer, by any stretch of the imagination. But it’s one of the most visible examples of hate speech in the world of soccer.

Anti-Semitism has been on the rise in the U.S. and Great Britain in the last four years and perhaps no club receives more anti-Semitic abuse than Tottenham Hotspur, which has historically had a large Jewish following. In 2016, Chelsea fans chanted “I’ve got foreskin, how about you? Fucking Jew!” In 2018, Liverpool fans called Spurs supporters “Jewish cunts.”

To some extent, Tottenham supporters calling themselves the “Yid Army” or “Yiddos” is an attempt at reclaiming the anti-Semitism directed at them. But Jewish groups have condemned the use of those names, which are slurs. And yet supporters were still unafraid to use the terms while in Madrid for the 2019 Champions League final.

While Europe is the epicenter for anti-Semitism, it’s also prevalent in the Western Hemisphere, including a startling growth in South America. In 2019, Chelsea and the New England Revolution played a friendly in an effort to raise awareness for and fight anti-Semitism.

We could probably just put Serie A on this list and leave it at that, but it’s probably more prudent to highlight how bad racism is in certain regions of Europe. The Italian league has been one of the more high-profile offenders, often turning a blind eye to obvious racism against some of the sport’s biggest stars.

Monkey noises directed and bananas thrown at black players are shockingly commonplace in many regions of Europe, from Russia to Italy to England. Fans regularly demean, mock and racially abuse players of color in Serie A, the Russian Premier League and many other European leagues, making monkey noises whenever they are on the ball.

In one recent instance, Inter Milan’s Romelu Lukaku was subjected to monkey noises as he took a penalty kick against Cagliari. A Serie A tribunal cleared the club of all wrongdoing despite clear video evidence to the contrary and a past history of racist behavior from Cagliari supporters.

While a few rogue fans are usually the culprit, it’s not just the obvious instances of racism. A recent study found significant racial bias in soccer commentary in England and the U.S. Broadcasters use specific terms far more to describe players of color compared to white players, praising the former’s athleticism and the latter’s technique and intelligence. Just last summer, a Fox announcer repeated that type of biased commentary during a Women’s World Cup featuring Nigeria.

While most of this list is focused on issues perpetrated by fans at stadiums, there still exists in America a highly discriminatory system limiting equality in soccer in America: the pay to play structure of youth soccer.

Around the world, soccer (also known as football for the jerks who can’t comprehend synonyms) is an egalitarian venture — if you’re good enough, you play. All you need is a desire and a ball (or some scrap material to create a close approximation of a ball) and you can rise through the ranks. In Brazil, for instance, the best players typically come from the poorest regions.

But the U.S. has a different system, one rooted in socioeconomic discrimination. Most youth soccer clubs in this country require players (read: their parents) to pay exorbitantly high fees to participate, something Zlatan Ibrahimovic quickly noticed and lashed out against during his short time in the U.S. In this country, only the wealthiest have the means to get ahead.

While there are many clubs out there actively fighting the system, offering cheaper alternatives or scholarships, the truth is the current system is so deeply ingrained that the best soccer players in the country often can’t make it to the highest levels due to discriminatory economic factors.

It’s fucking 2020 and we’re still having to deal with asshats who think it’s a good idea to support one of the most despicable organizations in human history.

Valencia fans were caught in the Emirates Stadium making Nazi salutes and racist gestures.@valenciacf_en have communicated they will take action once the culprits are identified.#LLL
pic.twitter.com/VcuoZT108N

Nazis were bad, there is no getting around that. Any positive reference to Nazis must be condemned. Yet you still see swastikas and Nazi salutes across soccer, from Europe to the U.S. While peoples should feel free to celebrate their diversity and homeland, doing so at the expense of another country or people has no place in football.

We concede, if you want to you can point out that almost all major powers throughout world human history have committed despicable human rights violations — from the United States’ shameful slavery to China’s current treatment of Uyghurs. But the Nazis actively sought to murder an entire population of people who did not look or pray like them, so fuck anyone who thinks it’s OK to do anything remotely related to those bastards, especially around a soccer field.