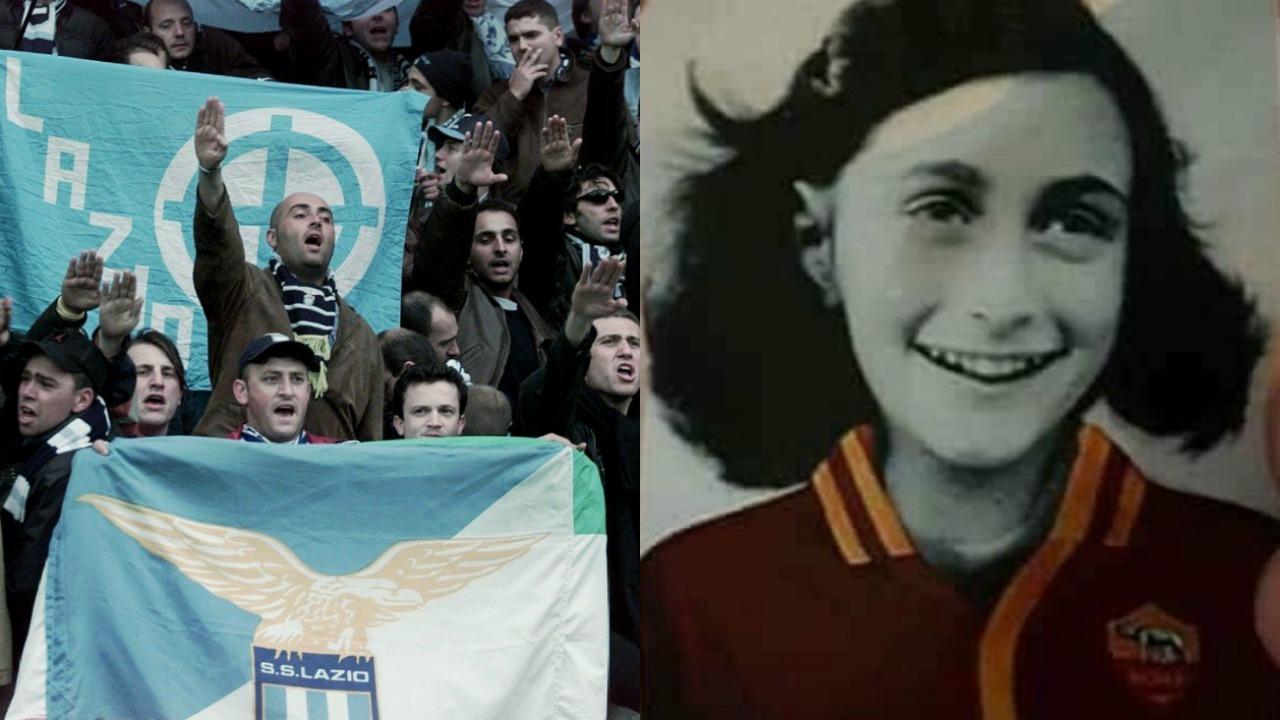 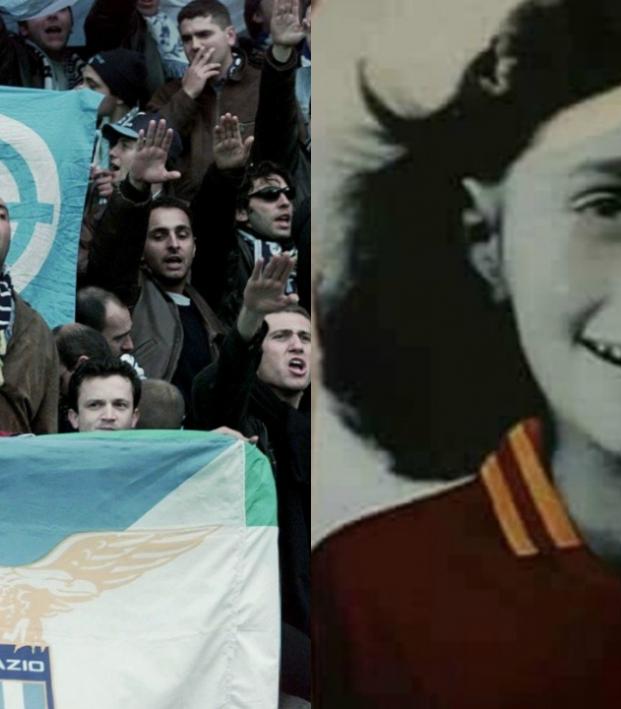 Racism, Homophobia And Antisemitism Plague Serie A With Little Resistance

Huw Thomas October 31, 2017
Another racist incident at Lazio has provoked a strong reaction in Italy but is enough being done to combat prejudice in Italian football?

This should have been a fun article to write. This should have been an article in which Lazio were praised and evangelized; the remarkable rehabilitation of striker Ciro Immobile after years in the wilderness; the astounding performance of manager Simone Inzaghi, only appointed after Marcelo Biesla refused to show up for work on his first day; the way in which the entire team has blown away opposition this year, propelling themselves all the way up the table and sitting, right now, level with Juventus. It should have been a fantastically positive article.

It’s impossible to divorce the brilliance of Lazio’s footballing efforts from the racist actions of their fans. For every breath we expend praising the wonderful goals and the intricately-planned tactics, we must expend twenty more condemning the idiocy of the fan base, the club hierarchy, other football fans, and – eventually – the entire structural organization of Italian football. There is racism in Serie A and not enough is being done to combat it.

This latest incident – and there is quite literally not enough space to list the recent history of racism in Serie A – occurred last week. The fallout has been remarkable.

The incident occurred during a match at the Stadio Olimpico, the ground Lazio share with Roma. Fans who visited the stadium littered the area with stickers depicting Anne Frank wearing a Roma shirt. Anne Frank, for those unaware, was a fourteen-year-old Jewish girl who kept a diary during World War Two. The Diary of a Young Girl describes how Anne and her family were forced into hiding by the Nazis.

The book ends abruptly, as Anne was captured, sent to a series of concentration camps and eventually killed as part of systematic genocide of Jewish people during the Holocaust. After the diary was discovered and published posthumously, it became famous for its depiction of the horrific plight of the Jewish people.

The stickers were placed in the Curva Sud, the end of the stadium associated with Roma, after the Lazio fans had been banished from their own Curva Nord after directing racist chants towards Sassuolo's Claud Adjapong and Alfred Duncan earlier in the month. 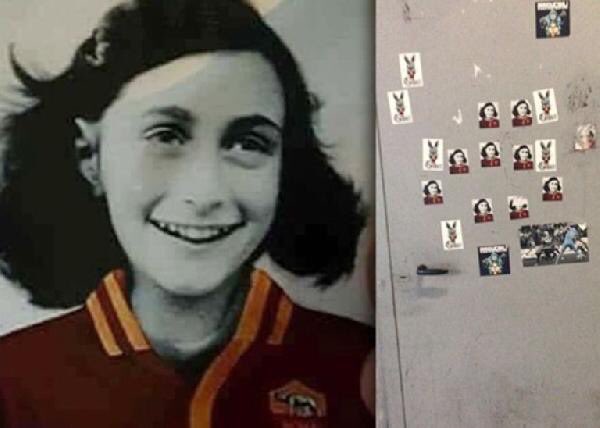 The insinuation of the stickers was clear. The motive was to frame Anne Frank, a Jewish girl, as a Roma fan. This was intended to be an insult. Arriving in the Curva Sud, the Lazio fans left the stickers as an attempt to enrage and taunt Roma fans with the implication that their club was associated with Jewish people and this was, in their minds, bad.

After the stickers were discovered, the story burst beyond the sports pages. The covers of a number of national newspapers were plastered with the story, bringing the actions of the Lazio ultras into sharp relief. For the most part, the stickers were condemned.

Action had to be taken. Immediately, the club and the Italian Football Federation (FIGC) embarked upon a public relations flurry. Claudio Lotito, the president of Lazio, announced that he would be sending a selection of younger fans on a tour of Auschwitz for them to see first-hand the horrors of the holocaust. Similarly, Lazio would emerge for their pre-game warm up at the next fixture wearing t-shirts bearing Anne Frank’s face. 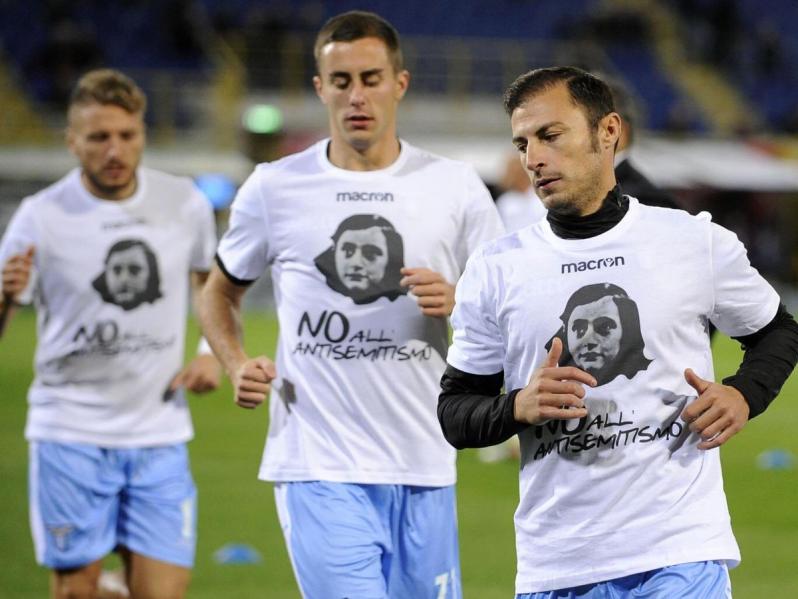 Across the country, further action would be taken. Quickly, images were reproduced which echoed the sticker, this time with Anne Frank wearing the shirt of every club. Rather than an insulting message, these new images appeared on the front pages of newspapers in an effort to demonstrate solidarity: We Are All Anne Frank.

A selection of her writing was to be read before every match, alongside another extract by the writer Primo Levi, a Jewish man interned in Auschwitz who wrote one of the greatest accounts of the concentration camp, If This Is A Man. Copies of these books were then handed to the young mascots.

But the actions were weakly implemented. The fresh batch of stickers, featuring Anne Frank in the shirts of other clubs, felt in poor taste. It hearkened back to the incident in which lower league side Rioveggio attempted to show solidarity with one of their Togolese players who had suffered racial abuse by donning black face. The intention might have been commendable but the execution left a great deal to be desired.

The actions of the fans in the stadium were far less well-intentioned. Though the majority of fans listened to the book extracts and remained quiet through the minute’s silence (or broke into applause), this level of respect was not shown by everyone.

A number of Lazio ultras refused to attend the match, publicly announcing that they refused to be a part of the “media theatrics.” Others inside the stadium turned their backs on the display in the center of the pitch, refusing to watch.

This indifference seemed to be shared by the club president. Recordings of Lotito emerged in which he described the pre-match display as “theatrics” which he was forced to put on. Though Lotito fiercely denied the allegations, his lack of conviction in dealing with Lazio fans’ racist behavior speaks for itself. 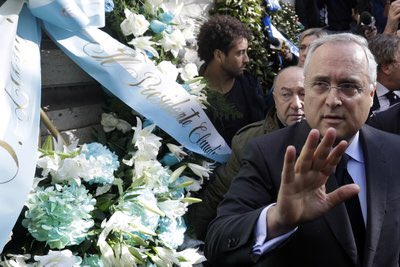 But he was not alone. Throughout Italy, fans of other clubs decided to show solidarity with the Lazio fans whom they felt were wrongly persecuted. During the Bologna game, a selection of fans sang "I Don’t Care", a song long associated with Italian fascism. Fans at the Juventus game turned their backs on the readings and sang the national anthem, while fans at the Roma game chanted the team’s name during the memorial service.

These fans made clear who they felt was actually the wronged party. Rather than empathize with the Jewish community targeted by the anti-Semitism of the Lazio fans, these football fans saw it more fit to side with their fellow match-goers. Being a football fan, it seemed, transcended being a human being.

Reaction to the incident has been depressingly predictable. For decades, ultra-groups have maintained close ties with far-right politics. Lazio, in particular, have long been associated with fascism, racism and anti-Semitism. As a result, the fans now perceive themselves as unfairly targeted, despite their proven track history of stupid, racist behavior.

But the actions of idiots and their racist groups are not wholly to blame. They are indulged by the clubs, who rely on their support, and by the club presidents. Lotito’s indifference to the problem demonstrates this quite succinctly. He was more concerned with a possible points reduction than with the actual prejudice evidenced by the fans, warning that club’s should not be punished for such rampant displays of prejudice.

Further up the hierarchy, there is an even greater problem. Throughout the ranks of managers, many have been accused of various forms of prejudice. Maurizio Sarri, perhaps the best manager in the league and a former bank employee, was accused of lashing out at fellow managers with homophobic insults as recently as two years ago. He was given a two-game ban and a small fine. Rarely is anything done about this.

Indeed, such behavior appears to be rewarded. The current head of the FIGC is Carlo Tavecchio. In audio recordings made during an interview, Tavecchio clearly states “I don’t have anything against gays but it’s better to keep them away from me” and refers to a real estate mogul as “that lousy Jew.” Tavecchio denies making the comments, despite them being caught on tape. He remains in his position.

From the fans to the players to the managers to the presidents to the people governing the sport, Italian football has a huge problem with all types of prejudice. Repeated incidents of racism, homophobia and anti-Semitism remain unaddressed.

These remarks are made by those in power, those who hold sway over players who might be gay, Jewish or belong to a racial minority. It is not difficult to imagine how those holding such views could cause irreparable damage to such a player’s career through their discriminatory views.