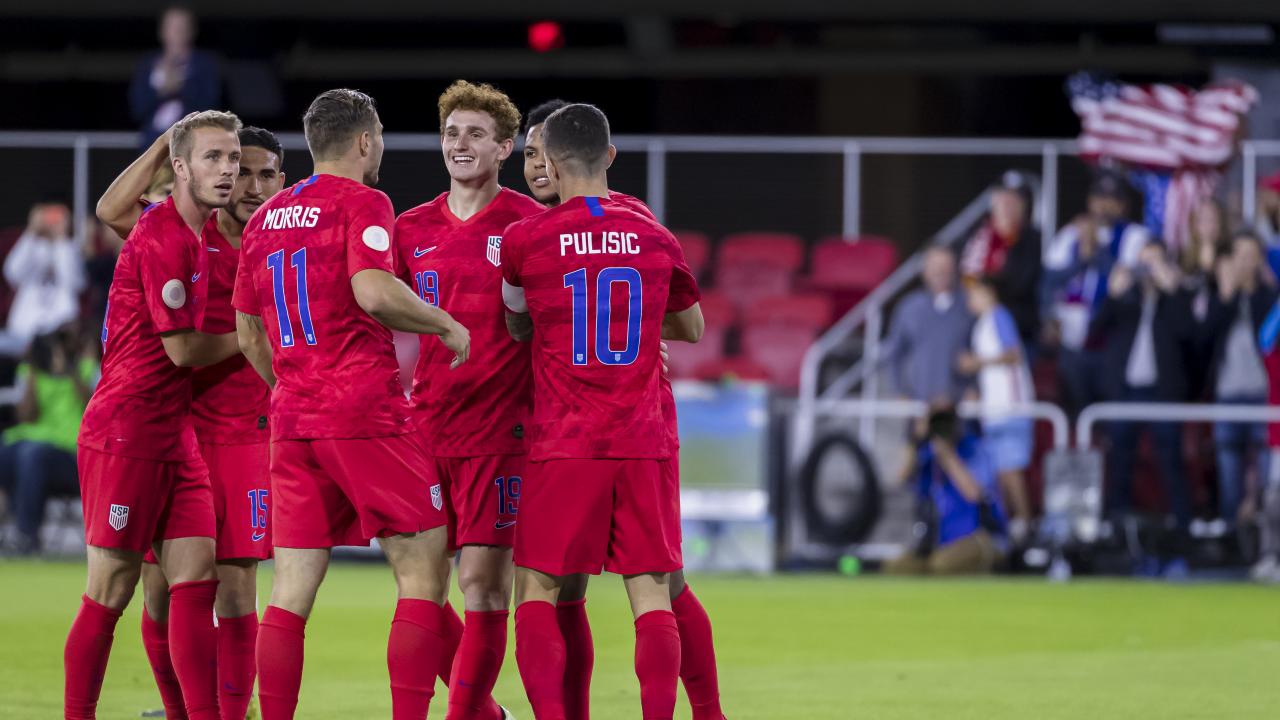 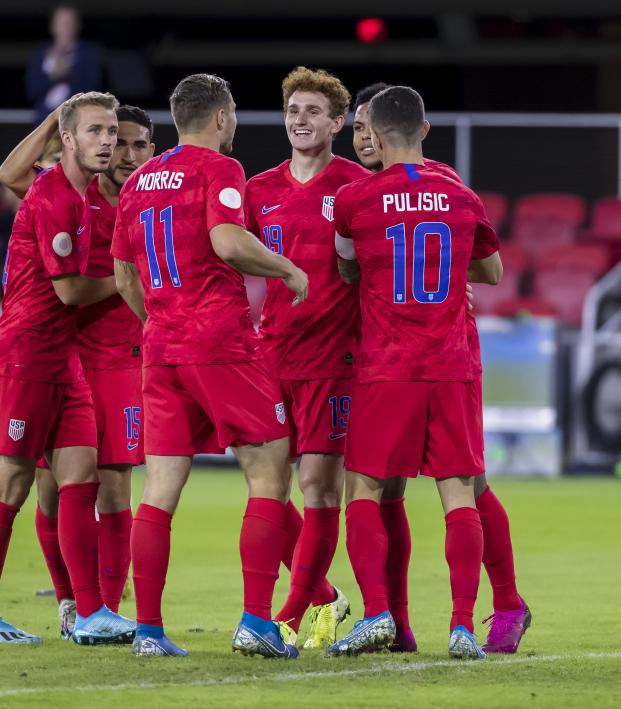 Who Even Plays On The USMNT Anymore? Here's A Potential Starting XI

A slightly out-of-touch fan of the USMNT recently asked me who plays for the team these days. After all, U.S. soccer fans that only watch the team during the World Cup haven’t seen them play in six years. Besides knowing about Christian Pulisic, casual fans might be under the impression that Clint Dempsey, Tim Howard, Jermaine Jones and DaMarcus Beasley are all still on the squad. I pray that no one thinks Landon Donovan is still playing.

The USMNT could possibly return to action in October after what will be an eight-month hiatus from international play due to coronavirus. Next year promises a full-plate of competition for the men’s team, including the CONCACAF Nations League Final Four, the Gold Cup and World Cup qualifying. Here's a list of who we could see represent the U.S. in the coming year.

Zack Steffen – Filling the shoes of Tim Howard is a task that has yet to be fulfilled. Steffen made headlines in the summer of 2019 after a transfer from Columbus Crew to Manchester City for $8 million. He was then loaned to Bundesliga side Fortuna Dusseldorf where he had a quality start for the club, including a 10-save game on his debut.

Injuries cut Steffen’s season short but a return to health could see him starting for the USMNT next year.

Other options at the position include Brad Guzan, Sean Johnson and Bill Hamid.

John Brooks – Yes, the guy that scored against Ghana in 2014. Brooks is one of the USMNT’s best defenders. The 27-year-old was a regular starter for Wolfsburg and helped the club finish seventh in the Bundesliga.

Matt Miazga – Hopefully Miazga defends for the national team better than he punches. A Chelsea loanee, Miazga finished a second season with Reading in the English Championship. The 25-year-old got into some trouble in June after getting into a fight after a game. He made seven appearances for the USMNT in 2019.

Some other center backs the USMNT boasts are Tim Ream and Aaron Long.

Sergiño Dest – In Oct. 2019, Dest shocked the world when he chose to represent the U.S. at the national level instead of the Netherlands. The 19-year-old already has Champions League experience during his time with Ajax. Along with his quality defensive skill, Dest is also capable of some fancy footwork to get out of sticky situations.

Another option at the left back position is Antonee Robinson, who's been destroying players in the English Championship, literally.

DeAndre Yedlin – Another player that featured at the 2014 World Cup, Yedlin is a debatable pick for the USMNT starting XI. The American speedster has been with Newcastle for four seasons but fell out of favor this past season, making only 10 EPL starts. Yedlin is 27 and needs to be playing, which is why he could very well be leaving the Magpies this summer.

Reggie Cannon, 22, of FC Dallas has been on the rise and made several appearances for the USMNT. He could take over the right back position in the coming years.

Tyler Adams – After making the move from New York Red Bulls to RB Leipzig, Adams has flourished when he hasn't been injured. In the 2019-20 season Adams missed over 10 games due to various injuries. When he's healthy, the 21-year-old is a menace for opposition, can make an assist from 75 yards away and is the best option for the USMNT’s midfield.

Weston McKennie – Another young American talent playing in the Bundesliga, McKennie shined for Schalke this past season. The soon to be 22-year-old has caught the eyes of several Premier League teams and looks to be leaving the Bundesliga soon. Leicester City, Wolverhampton and Southampton are all in the mix for the American.

In 2019 McKennie scored five goals in 12 appearances for the national team, including the fastest hat trick in USMNT history against Cuba.

Sebastian Lleget – The attacking midfielder role for the USMNT is anything but a set decision. With the USMNT’s most dangerous players out on the wings, the attacking midfield position is a weaker area in the team. Lleget made eight appearances for the national team in 2019 and scored one goal in a friendly against Costa Rica. Lleget has been with the LA Galaxy since 2015 and is a usual starter.

Also looking for a spot in the midfield is Jackson Yueill, Alfredo Morales, Duane Holmes, Julian Green and (looks down at notes, shivers) Michael Bradley.

Gio Reyna – Now we’re getting to the good stuff. First up in the USMNT’s deadly attack is the second coming of Pulisic: Reyna. The son of former U.S. captain Claudio Reyna has been impressing for Borussia Dortmund at the age of 17. This sounds so familiar. His first goal? Worldie. Champions League assist? Beauty. Was eligible to play international soccer with Lionel Messi, Cristiano Ronaldo or Harry Kane but chose the U.S. over them? Our hero.

Christian Pulisic – Please, for the love of God, stay healthy Captain America. Watching Pulisic go down in the FA Cup final with a hamstring injury was scarier than any horror movie. This is our most desperate hour. Help us Obi-Wan Pulisic, you’re our only hope.

Star Wars quotes aside, Pulisic actually has some talented players around him and won’t be the only one trying to drag the USMNT to a World Cup through Trinidadian mud.

Reyna and Pulisic aren’t alone at the wings either. The USMNT has a pool of talent in these positions with players like Timothy Weah, Paul Arriola, Jordan Morris and Tyler Boyd.

Wait, still Jozy Altidore? – The search for a prolific American striker is, well, still in progress. Altidore has yet to earn any forgiveness since his horrendous miss against Mexico in the 2019 Gold Cup Final.

Jozy Altidore (@JozyAltidore) missed a chance against goalie Guillermo Ochoa that would've given #USMNT an early lead against Mexico in the #GoldCupFinal. https://t.co/1vmJ223aGj

And yet this is still the go-to striker for the red, white and blue. Josh Sargent and Gyasi Zardes are close behind, but nothing to go crazy about.

Sargent scrapped together four goals in 34 appearances for Werder Bremen and still needs time to develop. Zardes looks more likely to take the striker throne after a hot start to 2020 with the Columbus Crew, scoring four goals in five games. In 2019 Altidore, Zardes and Sargent combined for a measly ten goals with Zardes scoring six of them.

Reyna, Pulisic and the other wingers can only do so much without a prolific striker in the middle. Someone will need to step up.