Giovanni Reyna made quite the first impression in his Champions League debut.

The American teenager supplied the game-winning assist as Borussia Dortmund beat Paris Saint-Germain 2-1 in the first leg of their UCL round-of-16 match on Tuesday at the Westfalenstadion.

The second leg is scheduled for March 11 in Paris, with the German side holding a slight edge thanks to Lucien Favre’s introduction of Gio, the son of former USMNT captain Claudio Reyna.

Gio Reyna has come on strong for Dortmund since the winter break. He made his senior-level debut with the club in January. The USMNT youth international’s first goal was an absolute stunner.

On Tuesday, Reyna made his Champions League debut coming into a scoreless game with 23 minutes to play. Having turned 17 in November, he became the youngest American to ever appear in a Champions League match.

Shortly after he arrived on the pitch, Reyna’s side took the lead.

Erling Håland, Dortmund’s other precocious teenager, was first to pounce on a blocked shot from Raphaël Guerreiro, poking the ball past Keylor Navas for the game’s first goal in the 69th minute.

The lead wouldn’t last long, however, as Reyna learned firsthand how strong Paris Saint-Germain’s superstars are.

Kylian Mbappé blew by the American attacking midfielder to set up Neymar with a vital away goal for PSG in the 75th minute.

But Reyna bounced right back and two minutes later supplied the game-winning assist.

Finding space behind the PSG midfield, Reyna spotted his fellow teenager with a faultless pass, allowing Håland to take one touch before blasting a thunderbolt past Navas.

Both Reyna and Håland were, coincidentally, born in North England. Reyna was born in Sunderland while Claudio played for the Black Cats. Håland, a Norway international, was born in Leeds while his father, Alf-Inge, played for the Peacocks.

Håland now has 11 goals in seven appearances for Dortmund. He was named the January Bundesliga Player of the Month after playing for just 59 minutes with the club, having joined from Red Bull Salzburg over the January transfer window. Tuesday’s two strikes pulled the 19-year-old even with Robert Lewandowski with 10 goals to lead all scorers in the Champions League this campaign.

But more about that American.

Aside from not being able to stop Mbappé (who can?) Reyna looked comfortable on the big stage under the Champions League lights. With Dortmund trying to keep possession and eat up clock late, Reyna drew a yellow on veteran fullback Thomas Meunier.

1/18 - Bundesliga Debut, 5th youngest player to ever play in a Bundesliga match

2/18 - Youngest American to play in the Champions League, match-winning assist vs PSG

The game burst into life once Reyna took to the pitch, replacing Eden’s brother Thorgan Hazard, in a contrast to much of the first half.

The early minutes had all the frantic energy and offensive disorder of an early morning first-round NCAA tournament basketball game. Players looked exhausted by the 20th minute, with both Emre Can and Neymar taking short naps on the turf after receiving briefly life-threatening injuries.

You wouldn’t blame Håland for sucking wind in the first half. After he cleared a defensive corner, he sprinted the length of the field, only for Jadon Sancho to ignore the run and blast a shot over the goal.

Håland cleared the corner then took off

But Håland is young and had plenty of energy for the second half, as evidenced by his two goals. He only became exasperated when asked after the match if he knows how good he is.

Neymar, meanwhile, was up to the antics that made him such a polarizing figure at the 2018 World Cup, being the victim of hard fouls and embellishing the shit out of them. He also picked up a yellow for this elbow on Axel Witsel. 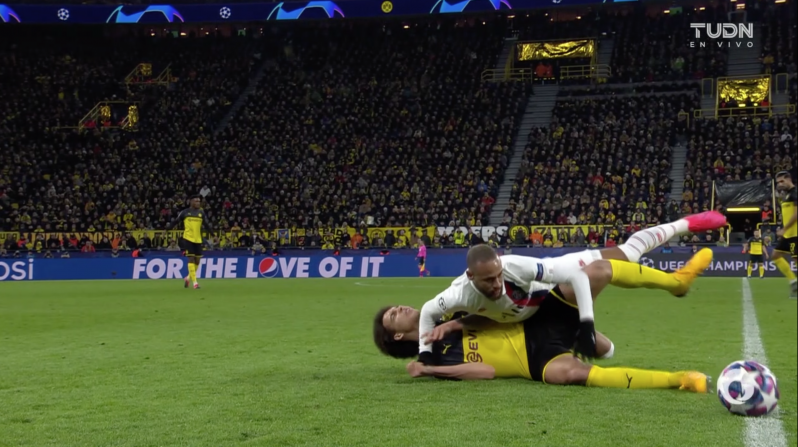 In the end, the 2-1 score line sets up an enticing return fixture in Paris in three weeks’ time.