Is Christian Pulisic The Most Overpriced Transfer Of All Time? 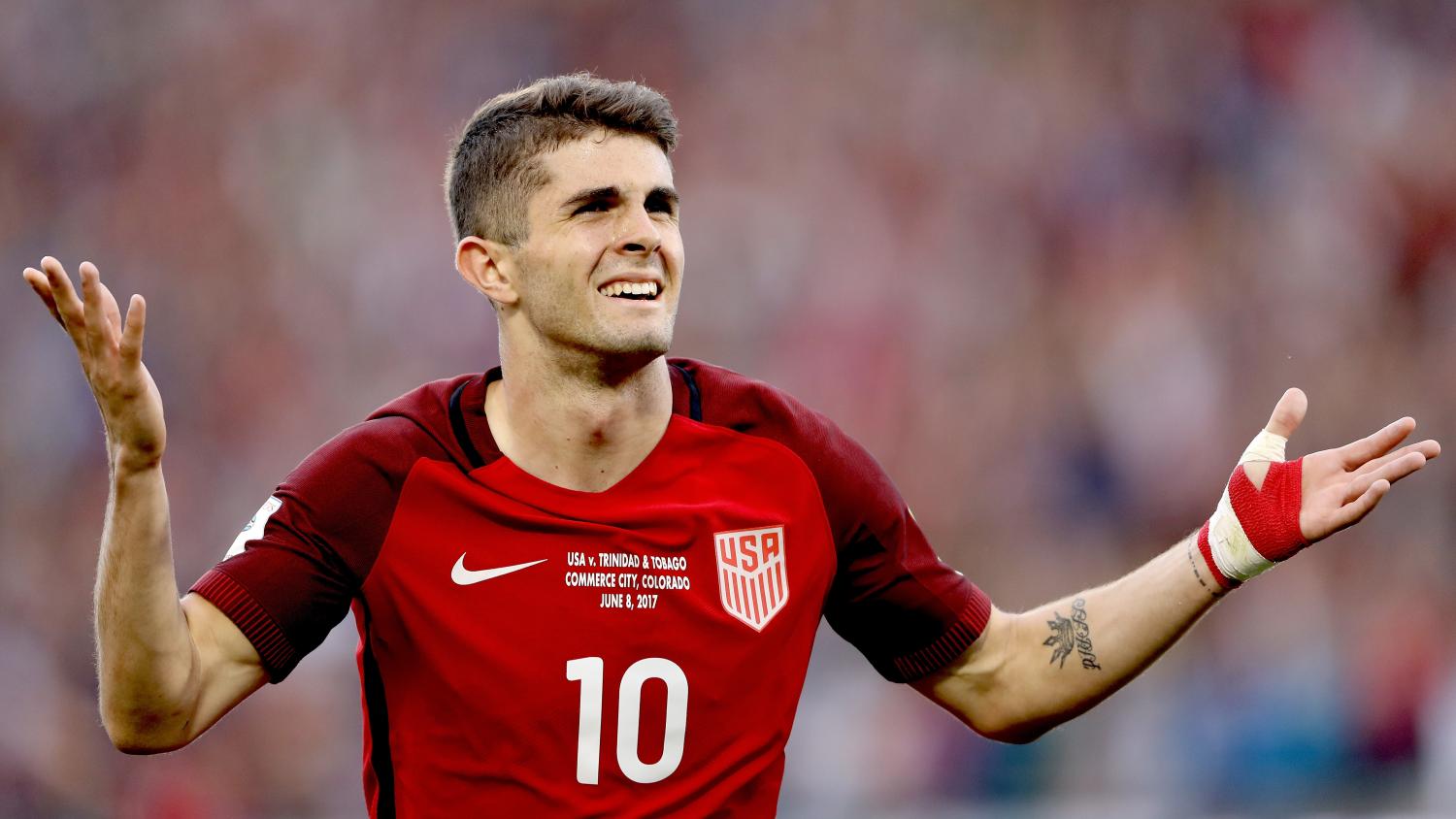 We all love Pulisic, but is he really worth $73 million?
Getty Images

Christian Pulisic, a 20-year-old from Hershey, Pennsylvania, is the 25th most expensive player in the history of soccer.

As much as we here at The18 love Christian Pulisic, we were a bit blown away by the fee he garnered on his transfer from Borussia Dortmund to Chelsea this week. We understand why, but the more you look at it, the more absurd it appears.

On Wednesday, Chelsea shelled out $73 million to bring the USMNT starlet to London, more than three times greater than the previous record paid for an American soccer player.

That’s more than Barcelona paid for a 21-year-old Neymar. More than Juventus paid for a 23-year-old Gianluigi Buffon. More than the then world-record fee Real Madrid paid for Luis Figo. Way more than anyone ever paid for Pelé, Diego Maradona, Johan Cruyff and anyone who played before 2000.

Yes, transfer fees have skyrocketed in recent years (and exchange rates are always changing), but a look at some closer contemporaries reveals just how overpriced Pulisic is.

When it comes to the biggest transfer fees of all time, no one can really come close to Neymar’s absurd $263 million garnered when Barcelona sold the 25-year-old Brazilian to PSG. It was an astronomical fee that marked the largest percentage change in world-record fees since a jump from £100 to £500 in 1903.

But Neymar’s transfer came when he was one of the best in the world and in the middle of his prime.

And Pulisic is no Neymar. Or Messi. Or Ronaldo. (Yet.)

When compared to other recent transfers, Pulisic’s transfer stands out. The move ranks as the third largest of all time for players aged 20 or younger.

Only Kylian Mbappé and Ousmane Dembélé demanded higher fees than Pulisic as precocious youngsters. Mbappé is looking like a once-in-a-lifetime talent, having already won the World Cup before turning 20 and beating out Pulisic for the inaugural Kopa Trophy. Dembélé’s price was mostly a product of Barcelona having an insane amount of cash to spend after Neymar’s transfer, but he still has time to live up to his potential.

Pulisic cost Chelsea more than Manchester City paid for Kevin De Bruyne, more than Arsenal’s club-record fee for Pierre-Emerick Aubameyang and way more than Man City’s purchase of Raheem Sterling and Leroy Sané, who also were both 20 at the time. 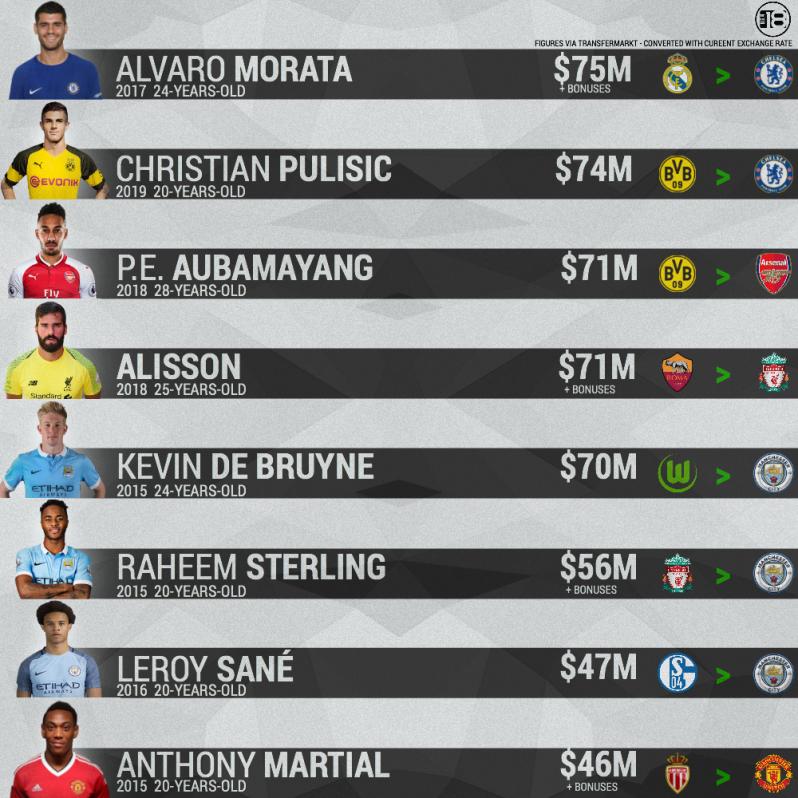 Is Pulisic really worth this much?

Well, it’s all in the eye of the beholder.

In footballing terms, Pulisic is nowhere near the level of some of the players on this list at the time of their transfers. When De Bruyne moved to Manchester City at 24, he was coming off a year in which he was named the Bundesliga Player of the Year. So far the only non-youth honor of any stature Pulisic has won was U.S. Soccer Male Athlete of the Year in 2017.

Pierre-Emerick Aubameyang scored 40 goals in 46 matches (also for Dortmund) the season before moving to London and is in his prime. Pulisic plays in a different role, but he has only contributed to 39 goals (15 goals, 24 assists) in 115 appearances with Dortmund.

Perhaps most surprising is that Pulisic cost more than Raheem Sterling. British players are usually overpriced in England and although Sterling’s move to Manchester City came nearly four years ago, at 20, Sterling had established himself as a regular with Liverpool with 52 appearances and 11 goals as a winger in 2014-15.

The transfer market is always changing — and prices are always going up — but it’s hard to say that, on a footballing level, this deal was worth it for Chelsea. On the face of it as we currently stand, it looks like only Dembélé was more overpriced than Pulisic in the history of the game.

But that’s not to say it’s a bad deal for Chelsea.

When looked at as a business move, Pulisic’s transfer fee makes complete sense.

The United States is a massive market for soccer with huge potential for growth. By signing the USMNT’s most popular active player (a status he’ll likely have for years to come), Chelsea is setting itself up to be the most-followed club in the U.S.

While we’ve debunked the theory of making up a transfer fee in jersey sales, there’s still a lot of money to be made by signing popular players. As Americans regularly tune in to NBCSN next fall to see if Pulisic is playing for the Blues, Chelsea will be slowly gaining fans. In the same way Borussia Dortmund became must-watch viewing for USMNT fans, so too will Chelsea.

This is the reason Pulisic’s transfer fee was so much higher than the other players on this list, none of whom are from North America. (Maybe Chucky Lozano will pass Pulisic's fee one day.)

Will the windfall from American followers be enough to offset the astronomical fee Chelsea paid for Pulisic? Maybe, maybe not. Chelsea has shown it doesn’t really care too much about overspending.

While Pulisic will have the pressure to perform as one of the club’s most expensive signings, it won’t be anywhere near the pressure felt by Fernando Torres, who cost the club about $70 million in 2011, at the time the largest Premier League transfer ever. And Pulisic won’t have to do too much to outperform the one-time club-record signing.

Of course, this all assumes Pulisic doesn’t perpetually stay out on loan.