USWNT’s Youth Rebuild Has Yet To Take Flight — Is It Time To Worry?

Travis Yoesting June 29, 2022
The USWNT failed to impose its will against Colombia. Where should concern levels be ahead of World Cup and Olympic qualifying?

The USWNT huffed and puffed its way to a 2-0 victory over Colombia on Tuesday night in Sandy, Utah. It was hardly the first time the Americans struggled to put away lower competition, and with World Cup and Olympic qualifying less than a week away, you have to wonder if it’s time to start worrying about the USWNT’s rebuild.

The U.S. opens the Concacaf W Championship on Monday, July 4, against Haiti. With World Cup and Olympic berths on the line, is the youthful USWNT ready for do-or-die matches? So far, it’s hard to say this U.S. team looks like world beaters despite a 14-game unbeaten run. There are reasons to worry for the short term, though a closer look reveals a squad that could be rounding into fine form for the 2023 Women’s World Cup.

Since the debacle that was last year’s 2020 Olympics, coach Vlatko Andonovski has begun to introduce younger players into the national team setup. This, of course, is to be expected at the start of a new World Cup cycle, albeit one shortened by Covid pushing the Olympics back a year.

The U.S. is a country with enough talent to reload instead of rebuild. Despite a disappointing Olympics showing, the Americans still took home bronze and boast one of the deepest player pools in the world. Veterans like Carli Lloyd, Ali Krieger and Ashlyn Harris were phased out; youngsters like Trinity Rodman, Naomi Girma and Emily Fox were phased in.

For the most part, these younger players have more than proven themselves. Alana Cook, 25, has staked her claim to start at center back alongside Becky Sauerbrunn. Mal Pugh, 24, has experienced a career resurgence both with the Chicago Red Stars and USWNT and looks like a great counterbalance to Sophia Smith, 21, on the opposite wing. Washington Spirit’s Ashley Sanchez (23) and Rodman (20) have shown they can produce on the biggest stage. Catarina Macario is one of the best players in the world at 22. 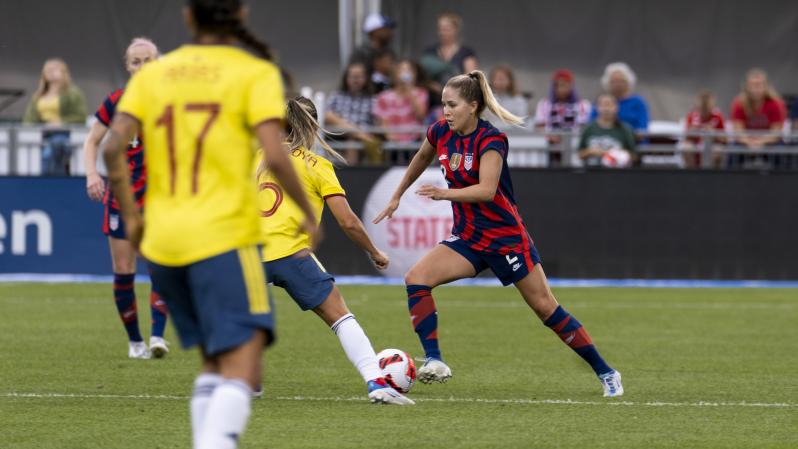 Ashley Sanchez is a star in the making. Is she ready for the World Cup? Photo: Mariel McCown | The18

And yet, these same players have often been on the pitch as the U.S. has failed to impose its will on matches in the way that has long been the norm for the top-ranked team in the world. Sure, the USWNT has high standards, but why accept anything less than the best from the greatest soccer team of all time?

The U.S. has now had three games since the 2020 Olympics in which it was unable to dominate lower-level foes: a 0-0 draw with South Korea, 0-0 draw with Czech Republic and the 2-0 win over Colombia. (The 1-1 draw in Australia is a respectable result given the caliber of the Matildas.)

South Korea can, on a good day, beat anyone (the Taeguk Ladies beat Australia to qualify for the World Cup, though the Matildas were already qualified as hosts). But the Asian confederation is arguably weaker than it’s ever been after North Korea withdrew from World Cup qualifying. The 0-0 draw between the U.S. and South Korea in Kansas City on Oct. 21, in Carli Lloyd’s penultimate match showed a startling lack of that final ball, even from a lineup that included Alex Morgan, Rose Lavelle and Lindsey Horan.

In the SheBelieves Cup opener against the Czech Republic, the attack was even more anemic. The Czech women are ranked 25th in the world and have managed just five points from six World Cup qualifiers in a group that includes the Netherlands, Iceland, Belarus and Cyprus. It was the first real opportunity for Andonovski — without post-Olympics roster requirements or other restraints — to select all the players he wanted to integrate or give a chance with the national team.

Despite racking up 18 shots — eight on goal — the Americans failed to score against a team that shipped four goals in a loss to Iceland in World Cup qualifying. Not even Rodman’s debut could spark the U.S.

Then there was Tuesday’s win over Colombia. Though statistically dominant, the Americans struggled to break down the 28th-ranked team in the world, scoring their first goal (besides an own goal) in the 77th minute after a lightning delay. For a while, it looked like Las Cafeteras might nab an equalizer and secure an unlikely draw on U.S. soil. Sure, the USWNT won, but it was far from impressive.

Even in the 3-0 win on Saturday, the USWNT looked far from full flight. Two missed penalties prevented the score from being higher, but the U.S. failed to capitalize on numerous opportunities, putting just three goals in from 22 shots. (Failed penalty kicks from Horan and Lavelle plus poor set-piece delivery from Pugh were prime examples of why Megan Rapinoe is still on this team.) 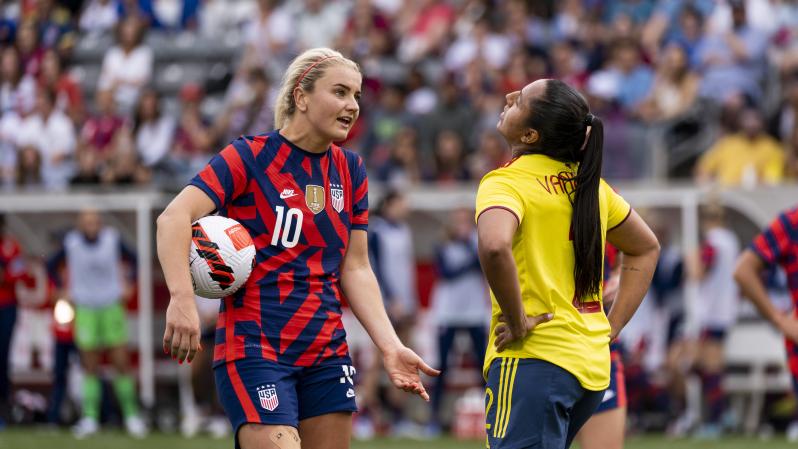 Lindsey Horan will play as the USWNT No. 10 in a major tournament for the first time in the Concacaf W Championship. Photo: Mariel McCown | The18

The issue for the USWNT is creating good looks at goal against a packed-in defense. Colombia, like the Czech Republic and South Korea before, sat back and waited for the Americans to attack. With most USWNT players currently competing in the NWSL, where fast-paced attacks and counterattacks are the norm, breaking down compact, deep-lying defenses has proven difficult. It doesn’t help that the USWNT has long relied on its physical prowess as much as its technical abilities, though that continues to improve.

The U.S. doesn’t always struggle (there were no problems against New Zealand, Iceland or hapless Uzbekistan), but there’s enough of a recurring them to concern Andonovski.

What’s most troubling about the Colombia match was the proximity to the Concacaf W Championship, which is less than a week away, and the fact Colombia plays in a similar fashion to teams the USWNT will face in Mexico. This is the same squad that will travel to Mexico in attempts to qualify for the World Cup and Olympics, with a few exceptions for roster size.

The real concern heading into the Concacaf W Championship is qualifying for the 2024 Olympics. The winner of the tournament receives Concacaf’s first berth to the Paris Games. The second- and third-place finishers then face off in a playoff in September 2023 for the second and final Olympic berth. The U.S. doesn’t want to lose and risk a do-or-die playoff in more than a year — after a World Cup that could be deflating regardless of result — to qualify for the Olympic Games.

How Worried Should USWNT Fans Be?

So, should USWNT fans be worried?

Mexico has a history of handing USWNT untimely defeats. The last time this tournament was held in Mexico, La Tri beat the U.S. 2-1 in the semifinals, forcing the Americans to go through an intercontinental playoff against Italy to reach the 2011 World Cup. Jamaica has arguably the most in-form striker not named Alex Morgan at this tournament in Khadija Shaw, who has an unreal record of 56 goals in 38 appearances for the Reggae Girlz. Even Haiti has had a strong 2022, qualifying for the Concacaf W Championship with four wins by a combined 44-0.

That said, getting out of the group shouldn’t be a problem. The U.S. has more difference makers than anyone else in its group. Even if Haiti, Jamaica and Mexico all park the bus, the Americans can always throw on Megan Rapinoe and 6-1 Taylor Kornieck to score via the set piece, as they did against Colombia in the match in Commerce City, Colorado.

Qualifying for the 2023 Women’s World Cup is basically a given, but what about the Olympics? That is what Andonovski has to be worried about after watching his young team bumble its way through two mediocre wins over Colombia.

In the semifinals, the U.S. is likely to face Costa Rica (ranked 37th in the world) or Panama (57th), easier opponents than Colombia. A win there would set up a showdown with Canada, unless Mexico or Jamaica can spring an upset in the other semifinal.

Facing the sixth-ranked team in the world for a spot in the Olympics with the way this USWNT squad is playing is a terrifying proposition. Who can forget how Canada shoved the U.S. aside in the semifinals on its way to Olympic gold last summer?

All-time leading international goal scorer Christine Sinclair is still going strong at 39 to lead a loaded roster that never makes it easy on the Americans. If the USWNT plays as it did against Colombia, Czech Republic and South Korea, Andonovski could see the U.S. forced into a playoff 15 months later to learn its Olympic fate.

Then again, this team might be better suited to playing higher-caliber opponents like Canada, which will afford more space in behind as fullbacks like Ashley Lawrence and Allysha Chapman get forward. Lavelle masterfully showed what she can do when Colombia stepped forward on Saturday, and Smith, Pugh, Rodman and Midge Purce can exploit any gaps in the defense.

All that said, this USWNT is not the national team that will represent the U.S. at the 2023 Women’s World Cup. The Americans are missing an absurd amount of talent from injuries and pregnancies — 849 caps and 191 goals to be precise. Macario, Crystal Dunn, Julie Ertz, Christen Press, Tobin Heath, Lynn Williams, Sam Mewis, Tierna Davidson and Abby Dahlkember will not be in Mexico but could be in Australia/New Zealand.

The biggest name missing from the roster is Macario, who was arguably the best player on the best team in Europe last season before picking up an ACL injury in Lyon’s final match of the season. The 22-year-old is just what the U.S. needs to break down compact defenses, with a combination of lethal finishing, ability to find the killer pass and a unique guile to find ways to score for herself and others.

Add Macario, Dunn, Ertz, Press, Sam Mewis and Dahlkemper to this roster and no one is doubting the Americans.

The question will be how the young and old meld when everyone is fully healthy. Unfortunately, Andonovski and USWNT fans won’t be able to figure that out at the Concacaf W Championship.