Travis Yoesting March 4, 2021
Reggie Cannon, who has 13 USMNT caps, has a fairly famous stepsister and grandfather.

Reggie Cannon is like a lot of Americans playing soccer abroad these days. He’s young (22), talented (13 USMNT caps already) and eager to help the U.S. do things it’s never done before in international men’s soccer. But unlike many (but not all) of the young Americans playing for top European clubs right now, he’s got an accomplished family helping inspire and encourage him.

Cannon left his hometown club of FC Dallas in September, joining Boavista in Portugal’s top flight for just under $3 million. The fullback did not leave Texas on the best of terms, but he took little time acclimating to Europe, scoring in his debut. Cannon has started 20 of 23 games since joining Boavista.

While Reggie Cannon wasn’t exactly a huge name in MLS before moving abroad, he has a fairly big-name family in the U.S. His grandfather is a famous scientist who was honored by President Barack Obama. His stepsister is breaking glass ceilings in baseball.

Cannon’s grandfather, Warren M. Washington, is an acclaimed climate scientist at the National Center for Atmospheric Research in Boulder, Colorado. In 2010, Washington was one of 10 researchers to receive the National Medal of Science from Obama. He’s also won the Tyler Prize for Environmental Achievement.

The fact Washington has accomplished all of this as a Black man is something Cannon said he admires, as he discussed in a recent interview with The Guardian. 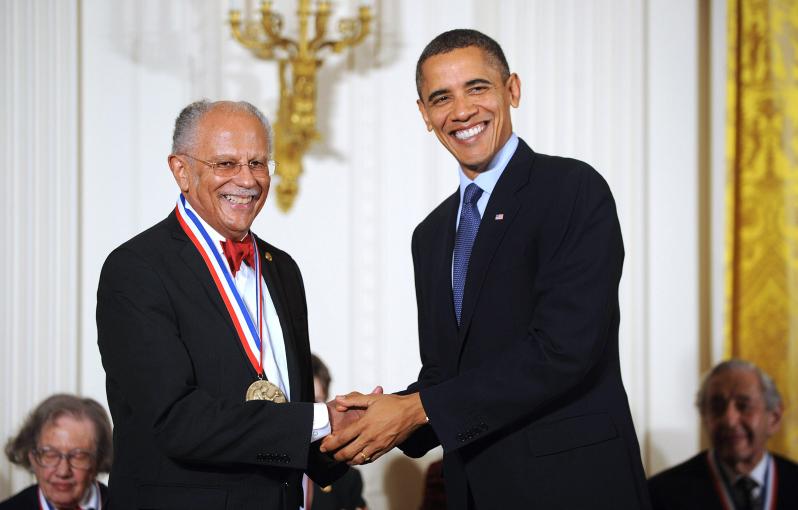 U.S. President Barack Obama presents a National Medal of Science to Warren M. Washington from the National Center for Atmospheric Research in the East Room of the White House Nov. 17, 2010, in Washington, DC. Photo: Getty Images

“Growing up I didn’t even know what my grandfather had done all for my country, for science,” Cannon told The Guardian. “He has done an incredible amount of work. Even now, where people still reject climate change in America, I look at the work my grandfather has done to scientifically prove a lot of that exists and it’s a threat that is coming — it’s really incredible to see the groundbreaking work he has done, especially as an African-American in his time.

“He has broken a lot of boundaries and he has given a lot of motivation to my career and that’s why people can’t push me down because he had to go through it all to get to the level he is; to shake Obama’s hand; to win that medal; to prove scientists wrong that an African American can do that. He played a very pivotal role in paving a lot of paths for people. I have the utmost respect for him, he has given me a lot of motivation. His work in climate change really speaks to me now, especially when we see people deny climate change. It is incredibly important.”

The U.S. needs more giants in science like Washington, and fewer science deniers.

In January, Smith was hired by the Boston Red Sox of Major League Baseball, a league not known for hiring women (though that’s changing with Smith and Kim Ng).

Though it took an Ivy League education, two graduate degrees and countless certifications and internships, Smith became the first Black woman to serve as a professional baseball coach.

It’s a family joke now that Bianca Smith is breaking the most stubborn of baseball’s barriers with the Boston Red Sox, a team Smith’s mother — a Yankees die-hard — couldn’t stand. https://t.co/UU7bTfFAbv pic.twitter.com/4u92tDf7fz

While Smith’s dad played college football at Dartmouth and her stepbrother excelled in soccer, she and her mother, Dawn Patterson, were baseball junkies. Patterson died of cancer at 44, so when Smith was 22, she devoted herself to finding a job in baseball.

“It hit me that I was 22. My mom’s life was halfway done at that point,” Smith told the New York Times. “It was a wake-up call. My mom always said that you spend most of your life working, so I needed to find the thing that I love to do.”

It may be no coincidence that Cannon was 22 when he left Texas for Portugal.

In the grand scheme of things, a young footballer starting for a Primeira Liga club is far from the most impressive thing Reggie Cannon’s family has accomplished. Cannon might just need to win a World Cup to really make a name for himself.

But he’s well on his way to carving his own path.

Before Cannon left FC Dallas, he had a public falling out with the club and its fanbase. FC Dallas missed the MLS Is Back Tournament because too many players had Covid-19, so the team didn’t return to play until August. Before a match against Nashville at Toyota Stadium in Frisco, Texas, players and referees took knees for the national anthem in support of the Black Lives Matter movement. FC Dallas and Nashville missed out on the powerful moment of silence when the MLS Is Back Tournament began, so they felt it necessary to show support for the cause.

The reaction of some of the fans was unfortunately not surprising. Audible booing was heard on the broadcast during the anthem, with one fan throwing a bottle at the players.

After the match, Cannon spoke about how the fan reaction “pissed me off.”

Cannon’s response went viral, especially the fact he called out his own fans and FC Dallas for forcing the players to be out for the national anthem when players said they didn’t feel it was right to play the anthem at all. Cannon was widely praised by people who are anti-racist. But FC Dallas tried to force him to apologize for his comments, even crafting a statement for him to release on social media.

Cannon refused to apologize, and less than a month later, he left the club that made him one of its coveted homegrown players, having received death and lynching threats for calling out racists for being racist.

Having had a few months to look back on his final weeks with FC Dallas, Cannon spoke about his stance this week with The Guardian.

“It’s such a polarizing issue when you get down to it, but we knew we had to do something that would spark conversation and that was the perfect opportunity to do so,” Cannon told The Guardian. “People were against violent protest, they were against peaceful protest, but they weren’t against any of that, they were against us speaking, us talking to point out the injustices that my people are facing and have been facing for the longest time.

“That whole situation with Dallas was handled terribly and there were repercussions of it, but my career wasn’t affected by that and I am able to get to the next level in good time. Unfortunately, my safety in America was compromised and that’s the risk you take with pointing out injustices because people are going to disagree. Threatening to kill your family, threatening to show up at your house, threatening to do vulgar things to you, that I can’t say. It is, unfortunately, part of the society that America is today, especially when Trump was in charge. Now we have moved past that.”

Cannon will probably never be a nationally recognized scientist (though he’s still young) and can’t break the same glass ceilings being broken in MLB right now by his stepsister. But the man from Texas is well on his way to making a name for himself, standing up for positive social progress and excelling as the only American in the Primeira Liga.

“Looking at the insurrection, Texas freezing over right now … explaining to my teammates what is going on in the country is baffling to me,” Cannon said. “Explaining the America I have lived in to those who don’t live in America, it feels like I am describing medieval times.”