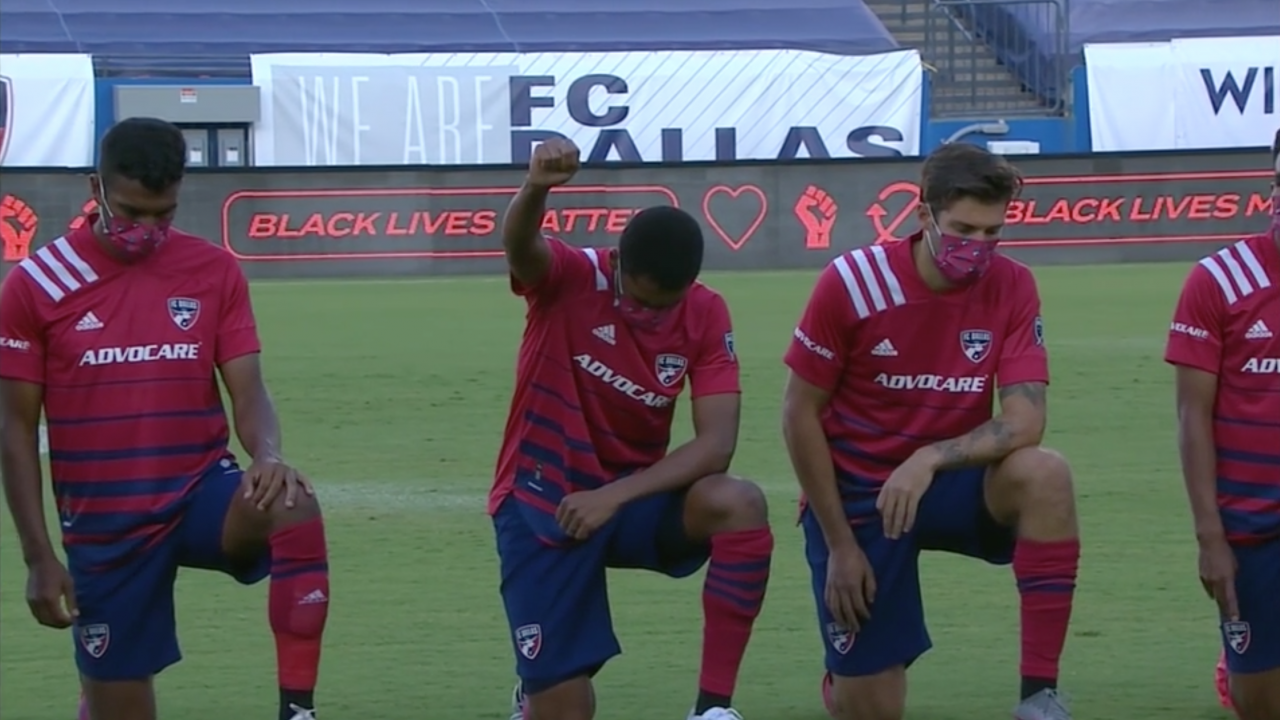 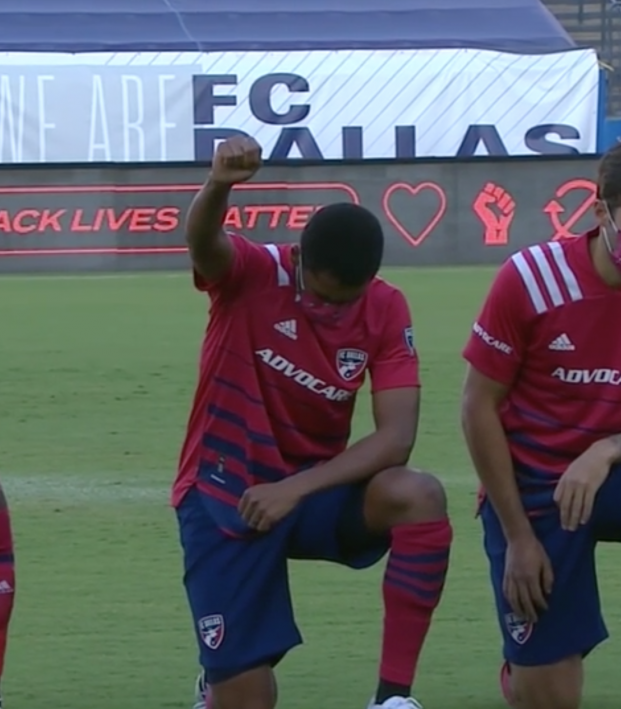 For the first time since the outbreak of the novel coronavirus pandemic, an MLS match was played in front of fans on Wednesday night. A few of those fans immediately used that privilege to boo human rights.

FC Dallas hosted Nashville SC in a make-up match of sorts at Toyota Stadium in Frisco, Texas. Both teams were expelled from the MLS Is Back Tournament, which was played in a bubble, because of too many positive Covid-19 tests. On Wednesday, they kicked off the resumption of the MLS regular season with the first of two matches between the teams in a span of five days.

On FC Dallas ownership dropping the ball completely allowing fans in stands during a continuing Texas pandemic: Don't listen to me. Listen to an infectious-disease doctor who's an expert. My next podcast with @celinegounder is out tomorrow.

FC Dallas allowed fans into Toyota Stadium at about 25 percent capacity (less than 3,000 showed up in the 20,500-seat arena). The club asked all fans to wear masks from the moment they stepped onto the parking lots outside the stadium. All attendees were forced to sign a waiver saying they won’t sue anyone involved in hosting the match if they contract the deadly coronavirus, not unlike the political rally held in Tulsa in June that killed Herman Cain.

To attend tonight's FC Dallas-Nashville game at Toyota Stadium, fans have to sign a waiver saying they will not bring legal action against the clubs, MLS, SUM, etc if they contract COVID-19: https://t.co/sQOR4s7VWf

It won’t surprise anyone who lives in the U.S. to learn many fans took their masks off while in the stadium.

2,912 fans were in attendance at tonight's FC Dallas game, per @c_vandergriff. pic.twitter.com/BJgk0tVhe1

Though this wasn’t the first soccer match to allow fans in stadiums since Covid-19 hit (the USL has been doing it for a couple weeks now), it’s immensely irresponsible in the U.S., which has completely failed to contain the coronavirus. Doing so in Texas is perhaps even worse, as the state has been hit hard by the pandemic thanks to an apathetic state government led by a sadistic governor who does as little possible to protect his people.

Sadly, that wasn’t even the worst part of the match.

Before the game, all players on both teams took a knee during the national anthem, evoking boos from racist, ignorant fucks in the stands. According to reports, racists booed the players immediately upon them taking knees, with one even throwing a bottle at the players.

National anthem plays, all players and refs are kneeling: pic.twitter.com/WGwHCBjdiW

Since the murder of George Floyd (not to mention the lynching of Ahmaud Arbery and the still-unpunished slaughter of a sleeping Breonna Taylor), the sports world has joined in with the chorus of voices demanding an end to the systemic white supremacy and police violence prevalent in America. MLS players began the MLS Is Back Tournament with a powerful message of unity featuring members of every team — except Dallas and Nashville, who couldn’t be in Orlando, Florida, for the tournament.

Dallas and Nashville players wanted to add their voices to the Black Lives Matter movement — which promotes human rights, not politics — and told their clubs and MLS they wanted to take a knee before the match, even going so far as requesting the national anthem not be played. The anthem was played anyway — after all, this is Texas, where Christian prayers go out over the loudspeakers before high school football games despite it being a clear violation of the separation of church and state.

The booing of Dallas and Nashville players for taking a knee was audible at the start and end of the anthem on the ESPN+ Spanish-language broadcast (available on replay here). While it appeared there were only a handful of racists booing the demonstration, it was clearly heard by the players.

After the match, Dallas and USMNT right back Reggie Cannon spoke out against the fans who booed, saying the “disgraceful” actions “pissed me off.” Cannon admitted it affected him for the remainder of the game.

“I think it was absolutely disgusting. You’ve got fans booing you for people taking a stand for what they believe in when millions of other people support the cause and we’ve discussed with every other team and the league what we’re going to do, and we’ve got fans booing us in our own stadium. How disgraceful is that?

“It pissed me off, we can’t even have support from our own fans in our own stadium. It’s baffling to me. As a team, we try to give the best possible product on that field, and these last six months have been absolute hell for us, absolute hell, because we have to watch other people play soccer and we’re just sitting at home unfortunately contracting COVID from the unfortunate situations that we were put in.

“I’m sorry to have this tone, but you have to call it for what it is. I even knew when we decided to kneel, I knew it was going to happen. That should tell you something there. I knew it was going to have some pushback from having a unified response over what’s going on. That’s a problem. It hurts me because I love our fans, I love this club, and I want to see the support that the league has given us, that everyone has given us from our fans. I love the people that came out tonight, but as soon as I heard that boo, I tried to play on.”

Cannon shouldn’t have to apologize for his tone, which was far more restrained than the situation warranted. Cannon should be applauded for standing up against the racist assholes who refuse to understand the deep-rooted systemic white supremacy so prevalent in the U.S., instead booing people trying to ensure basic human rights for all.

Alas, racist acts are now normalized in America. With a president who constantly dehumanizes people of color, ignores a pandemic that’s killed hundreds of thousands of (mostly Black and brown) Americans and who openly admits to trying to sabotage our elections, it’s no surprise even some soccer fans are racist too.

Again, fans never should’ve been in the facility in the first place, putting stadium staff at risk for the sake of a few thousand dollars. But racists should never be allowed in a stadium.