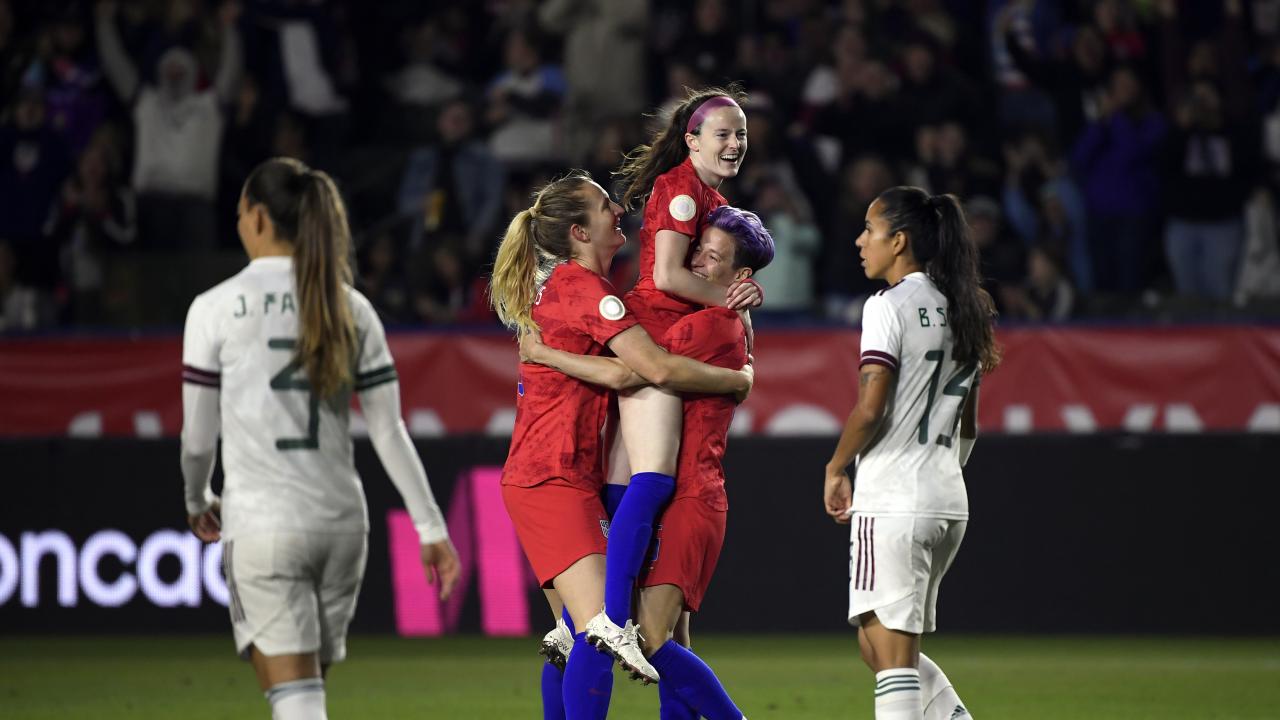 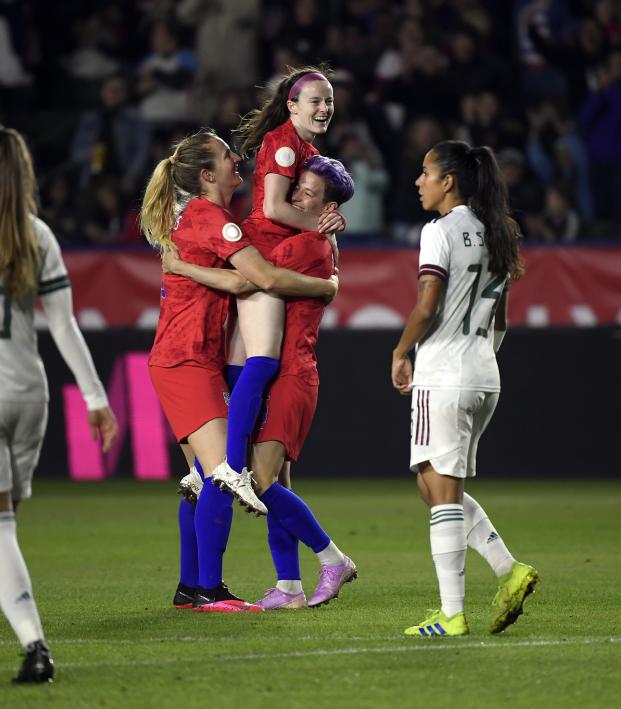 Travis Yoesting February 7, 2020
Rose Lavelle was the early spark as the U.S. beat Mexico 4-0 to qualify for the 2020 Tokyo Olympics.

Rose Lavelle always seems to have a smile on her face. But don’t let it fool you — she will absolutely destroy your soul if you come between her and a USWNT victory (or her dog, Wilma).

Lavelle provided the early spark and Sam Mewis added two smashing goals as the USWNT defeated Mexico 4-0 on Friday at Dignity Health Sports Park in Carson, California. The win qualified the U.S. for the 2020 Olympics in Tokyo while Mexico will miss out yet again. The U.S. has won four out of six Olympic gold medals while La Tri have qualified just once, in 2004. The U.S. will play Canada in the final of the Concacaf Women’s Olympic Qualifying Championship on Sunday.

Lavelle, the precocious 24-year-old who scored a spectacular goal in the 2019 Women’s World Cup final, showed why she’s the future of the USWNT from the opening minute of a do-or-die match Friday.

From the outset, Rose Lavelle sparkled for the U.S. Just a few minutes in, she danced around a few defenders before playing a clever ball to create an early chance.

It was, of course, Lavelle who scored the opener five minutes in.

A deft touch from Megan Rapinoe gave Lavelle space and time and she capitalized by unleashing a glorious shot past Emily Alvarado in goal.

The early lead ensured Mexico never gained the confidence it had in its remarkable upset in the 2011 World Cup qualifier 10 years ago and was just more proof that you should love Lavelle.

Mewis then showed she’s more than deserving of a starting spot in Tokyo this summer.

Some thought Mewis maybe should’ve been on the bench with Lindsey Horan in her place, but the N.C. Courage midfielder made it 2-0 in the 14th minute. Julie Ertz got a slight deflection on a Rapinoe corner set piece to set up Mewis for a smashing half-volley.

We've got @mPinoe with this impeccable corner, and @sammymewy just finding the perfect spot.

Are you not entertained? What a TEAM.  pic.twitter.com/PW22LGxHP5

Despite allowing the two early goals, Mexico eventually settled into the match well. La Tri threatened the U.S. more than any team in the tournament thus far. But goalie Alyssa Naeher was on her toes throughout to maintain the USWNT’s perfect defensive record this year.

A minute into the second half, Jimena López tripped Carli Lloyd up in the box. Or at least it looked like it was in the box. For some reason Honduran referee Melissa Borjas blew the whistle and pointed outside the box.

Outside or inside the box?  #USWNT pic.twitter.com/7Q7Z3pKBrs

So instead of a penalty kick, which Rapinoe probably would’ve converted, the U.S. had a free kick. Crystal Dunn, who was celebrating her 100th cap, had a sliding effort off the restart that whizzed just wide of the post.

Another set piece play that almost led to a goal. All players but the target player run in direction to the goal, open space for the shot and bring defenders with them. Crystal Dunn almost got her goal in her 100th game for the #USWNT #USAvMEX pic.twitter.com/MUWy3hTtYa

The moment was actually one of Lloyd’s more impactful contributions to the match. Though the 37-year-old scored in the 93rd minute of a 4-0 win over Haiti, she hasn’t shown enough to prove she’s a possible central striker replacement should Alex Morgan fail to return from pregnancy in time for the Olympics. On many occasions during this tournament, Lloyd blasted great chances over the bar. Fortunately, all indications point to Morgan doing everything she can to be back in time to go to Tokyo in July.

Ultimately it was Mewis who scored the third goal after another foul that looked like it could’ve been inside the box. On the ensuing free kick on the edge of the 18, Mewis hit a low drive straight into the back of the net in the 67th minute.

Samantha Mewis ARE YOU KIDDING  pic.twitter.com/KARSaOuJwX

The goal allowed USWNT coach Vlatko Andonovski to pull Rapinoe and Tobin Heath, perhaps resting them (and not Lloyd) for the final on Sunday. Soon thereafter, one of the subs who came in, Christen Press, made it 4-0.

Press, who never seems to get the credit she deserves despite coming in with 55 goals in 133 caps, scored in a sixth straight match with this lovely chip in the 73rd minute.

EVERY GOAL TODAY HAS BEEN INCREDIBLE.

With the game out of reach, Lavelle was subbed off to a standing ovation while also showing the depth of this U.S. squad. Even with Morgan out pregnant, Andonovski could still call on Press, Lynn Williams and Lindsey Horan as subs.

Before the match, USWNT fans who weren’t distracted by the Democratic debate on ABC were frustrated by the fact the match didn’t start on FS1 at 10 p.m. ET as advertised. Because of a college basketball game going long, Fox put the start of the coverage on FS2, which bumped a Tijuana-Toluca Liga MX match off the air entirely. Not that anyone is surprised, as Fox has regularly shown it has little regard for the world’s game.

It wouldn't be soccer on Fox without soccer getting bumped to a second channel (and bumping another soccer match off the air entirely) pic.twitter.com/cfCBYTqWny

To make matters worse, despite the match being played just outside LA, the Fox announcers weren’t even in Dignity Health Sports Park for the match, relying entirely on the feed provided by Concacaf to call the match.

But I suppose it’s better than nothing considering less than a week before the tournament no U.S. broadcasters had bothered to buy the rights to the qualifying tournament.

In the earlier semifinal on Friday, Canada edged Costa Rica 1-0 to book its spot in Tokyo. Coming off a 6-0 defeat to the U.S., Costa Rica held strong for most of the much until 18-year-old Jordyn Huitema, who we highlighted last summer before the 2019 Women’s World Cup, came up with the winner in the 72nd minute. The PSG forward’s first effort hit the post but she was there to poke home the rebound and send her country to the Olympics.

Canada has won bronze in the last two Olympics, which is more than the USWNT can say after failing to medal in 2016 (though it won gold in the three prior Olympics).

The U.S. and Canada will play in a mostly meaningless final on Sunday back at Dignity Health Sports Park. The winner gets bragging rights and not much more, with the semifinals being the biggest matches of the tournament.