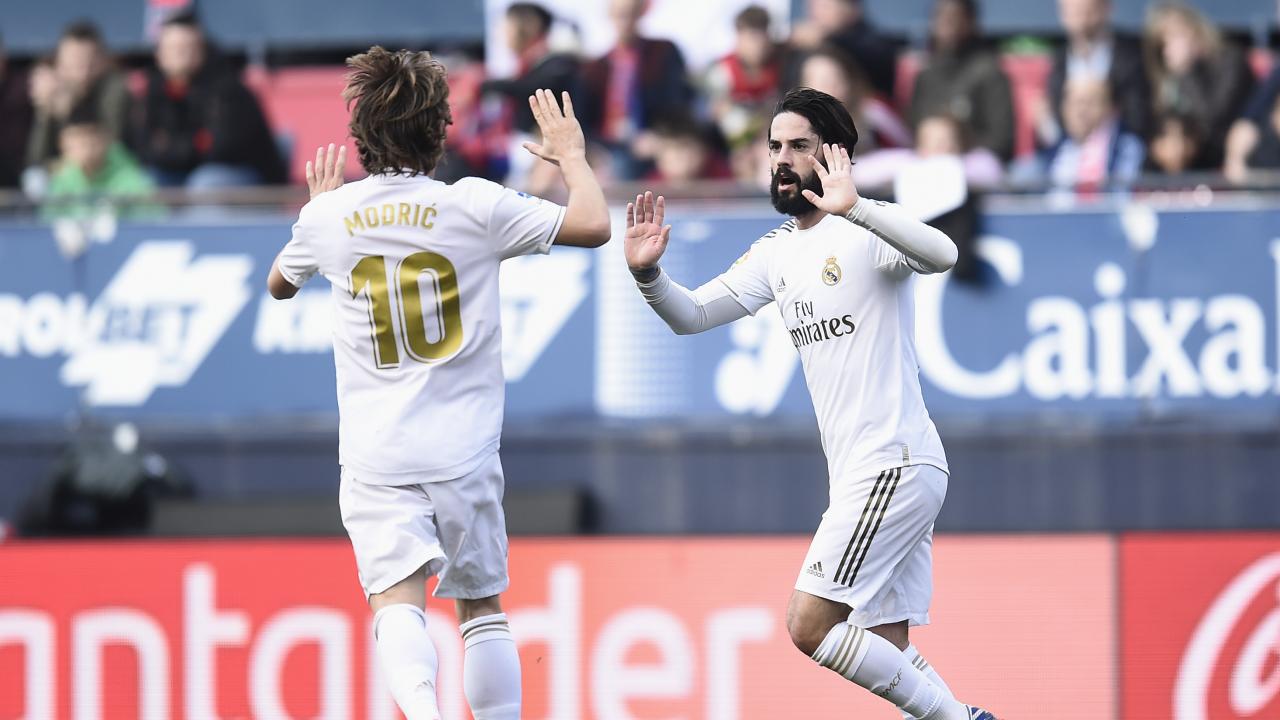 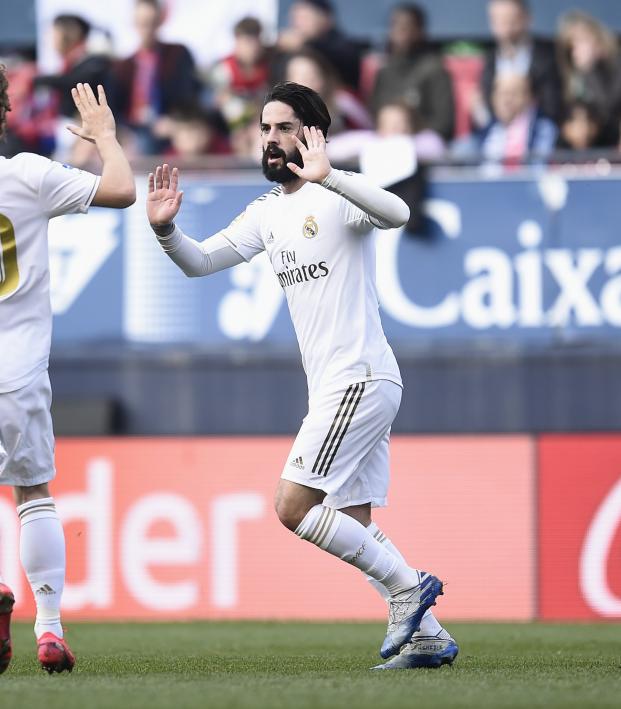 Connor Fleming February 9, 2020
Real defeated Osasuna 4-1 on Sunday, and Isco was named man of the match.

Real Madrid opened up a six-point lead at the top of LaLiga ahead of Barcelona’s late match on Sunday following a 4-1 away victory over 12th-place Osasuna. It was Unai García who gave Osasuna an early lead before Isco and Sergio Ramos completed the turnaround for the Spanish leaders with Lucas Vázquez and Luka Jović adding late insurance goals.

After conceding four goals for the first time ever under Zinedine Zidane last Thursday during a 4-3 upset defeat to Real Sociedad in the Copa del Rey quarterfinals, the Real manager restored his preferred backline and welcomed back Thibaut Courtois in goal and Casemiro at the heart of the midfield.

Still, it was the home side that struck first in the 14th minute after Rubén García’s corner was deftly steered home by way of García’s stooping header.

Well there's a turn-up for the books: @CAOsasuna put @realmadrid on the back foot.#OsasunaRealMadrid WATCH LIVE
beIN SPORTS
https://t.co/LRYa03w6yI pic.twitter.com/ePcqtECOUr

At the other end of the pitch, the only certainty for Real Madrid in attack this season has been Karim Benzema, who leads the side in both goals and assists. With Eden Hazard yet to make his return from a hairline fracture that he suffered back on Dec. 5, Zidane opted for a rare front three of Benzema, Gareth Bale (making his first appearance since Jan. 4) and Isco (no goals or assists in 13 LaLiga matches).

However, it was Bale and Isco who unwittingly combined for Real’s equalizer in the 33rd minute. After Pervis Estupiñán blocked Bale’s initial attempt at a half-volley, the deflection found Isco completely unmarked 10 yards from goal.

The 27-year-old smashed a controlled volley into the ground and beyond Sergio Herrera for his first goal of the season.

Five minutes later, Luka Modrić’s corner found Casemiro, who directed his header back across the face of goal for Ramos to finish. That was Ramos’ fourth goal of the LaLiga campaign as he moves clear as Real’s second leading scorer; not bad for a center back.

Isco exited the match in the 82nd minute to an ovation from the traveling section of support after producing his best display of the season. After establishing himself as one of football’s most unique attacking talents between 2016 and 2018, the 27-year-old’s form deteriorated last season and he’s found himself largely on the outside this campaign.

Today marked only his ninth start of the season, but he was brilliant with two shots on target (one a goal and the other a stinging shot from distance that forced a good save from Herrera) and more successful dribbles than any other Real player.

Isco has scored in LaLiga for the first time since 31st March 2019.

His first LaLiga goal away from home since September 2018. pic.twitter.com/f6etXT0I9W

The final score was emboldened by two late goals from Real. In the 84th minute, Benzema unselfishly teed up Vázquez for the two-goal cushion.

Then, in the second minute of stoppage time, Modrić sent Federico Valverde racing clear with a deft flick before the Uruguayan squared for Jović to finish. It’s Jović’s second goal for Real in 15 LaLiga games following his $66 million summer transfer from Eintracht Frankfurt.

Real returns to action next Sunday against Celta Vigo at the Santiago Bernabéu.