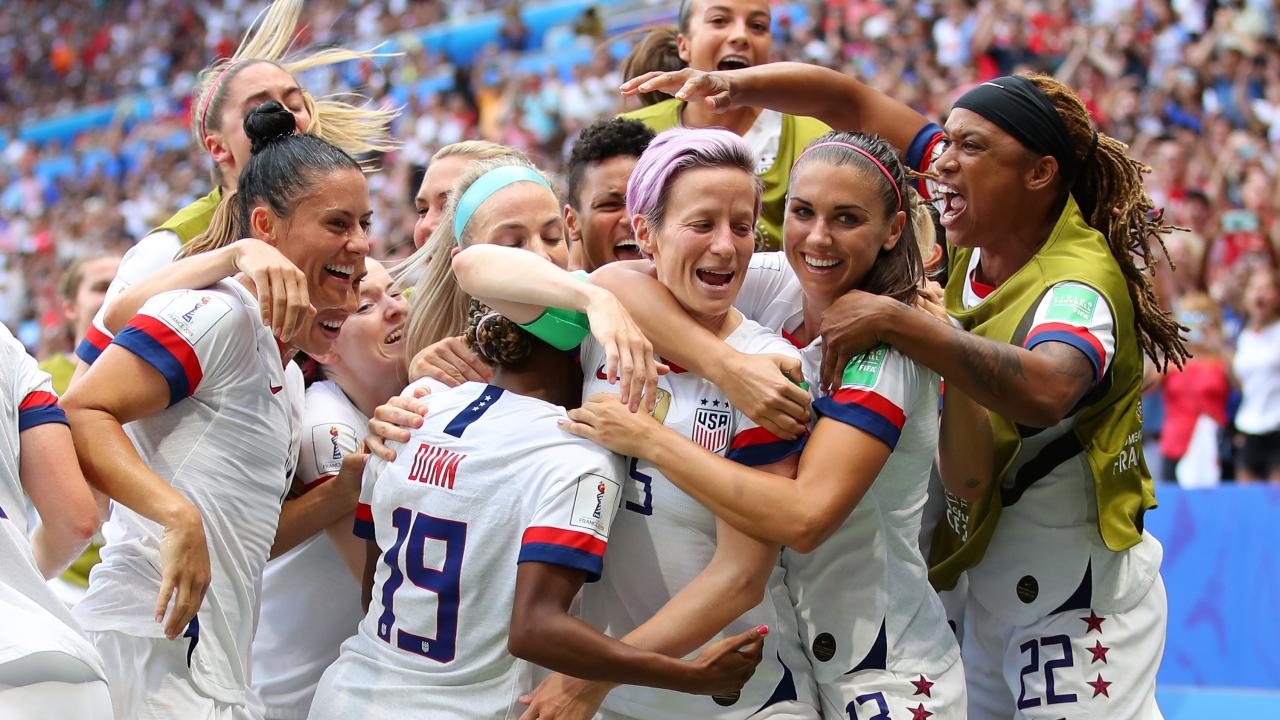 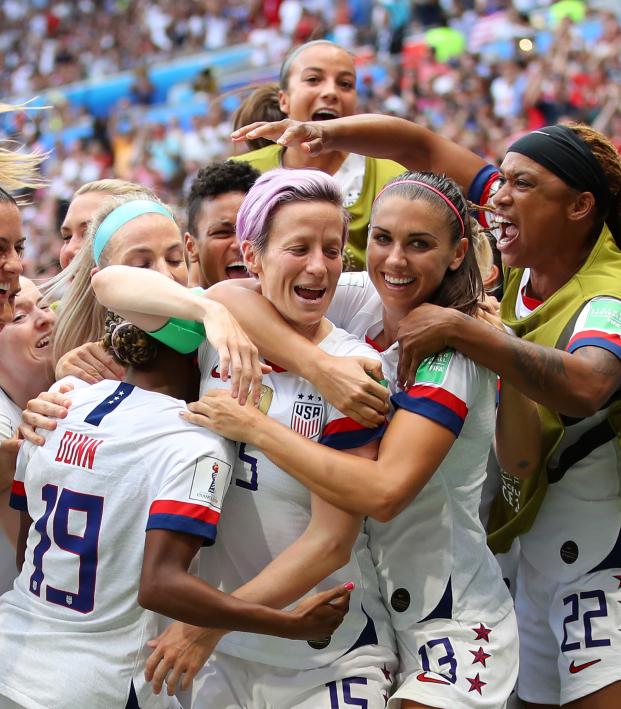 Travis Yoesting February 12, 2020
There’s no other way around it, this is a bad, bad look for the U.S. Soccer Federation.

It’s been nearly a year since the USWNT filed its gender equity lawsuit against the United States Soccer Federation. Eleven months into the legal battle, some of the most damning evidence against the USSF came out on Wednesday, courtesy of the USMNT players union.

The U.S. National Soccer Team Players Association, which represents USMNT players, released a lengthy, detailed statement about the USWNT’s 2017-21 CBA and how it relates to the women’s gender discrimination lawsuit against the USSF on Wednesday.

The statement accuses the Federation of “systematic gender discrimination” and creating a “false narrative” to use as a weapon against the USWNT lawsuit.

This isn’t the first time the USSF has looked bad during the lawsuit, nor will it likely be the last. But this is perhaps the biggest blow to any idea of the USSF treating the USWNT fairly.

Chief among the complaints from the USNSTPA is how the Federation is trying to convince the public — and even members of Congress and presidential candidates with lobbyists — of a false narrative after having created a monopoly to deny athletes’ rights. The statement also compares the Federation to a corrupt version of FIFA that is spending more money on legal fees than giving the four-time Women’s World Cup champions their fair due. It even goes so far as to suggest fans boycott Federation sponsors until the women are fairly compensated.

While worth a read in its entirety, we’ll provide an abbreviated/annotated version below, because we know you’ve got more important things to do, like playing another round of FIFA or Fortnite or watching Survivor.

Before that, it’s worth noting a few things.

First, this statement comes from a union that is also in constant labor negotiations with the USSF. This is a one-sided view from a players association that includes lawyers and current player reps Michael Bradley, Brad Guzan, Zack Steffen, Wil Trapp, DeAndre Yedlin and Tyler Adams. This is important to note because this statement was not released without at least a side goal of helping the USMNT negotiate better deals with the Federation. The statement even calls out the Federation for trying to force the USMNT to take a worse deal in its upcoming CBA to cover up the fact that the 2017 USWNT deal was “indefensible.”

Also worth noting is that the USSF has declined to comment on this statement as of yet. Even as the USWNT announced friendlies against Brazil and Australia ahead of the Olympics, there has been no response from U.S. Soccer, so we’ve yet to hear the other side of the story, if there can be a response to such a cleaver blow to the reputation of an organization already staggered with negative news over the last year.

Finally, it’s worth remembering the U.S. Soccer Federation being attacked here is a non-profit whose own mission statement is “to make soccer, in all its forms, the preeminent sport in the United States and to continue the development of soccer at all recreational and competitive levels.”

Now if you don’t have time to read the entire USNSTPA statement, we’ll hit on the major points here, with added context.

For starters, the USNSTPA said the purpose of this statement was to set the record straight as it can’t sit idly by and watch the USSF continue its false narrative, even as it would normally stay silent in such negotiations.

“By coming forward to explain the situation, the USNSTPA hopes to create a better understanding and perhaps help bring about a resolution,” the statement read.

The USNSTPA explained how the USSF, like other Olympic and national team entities, created a monopoly as the only organization capable of sending teams to international competitions and used this authority to make money off of players’ likenesses sold to sponsors. This has always created an unfair balance of power, the statement claimed.

“USMNT and USWNT players have always received less than fair compensation when playing for the National Teams,” the statement read. “At the same time, every training session and game carries the risk of injury.”

According to the union, both the USMNT and USWNT have long faced uphill battles to receive fair compensation from the Federation since the teams formed unions in the 1990s.

“The Federation norm is forcing players to play under expired collective bargaining agreements, sometimes for over two years,” the statement read. “Historically, the Federation has justified its unreasonable proposals by claiming its financial future was uncertain. The Federation still claims it cannot afford to pay the players a fair share of the Federation’s revenue from selling the efforts of those players to fans, sponsors and television.”

The USMNT and USWNT unions often worked together over the years, which means the players have an intimate knowledge of how each side is being treated.

“With our unions working together since 1999, the goal was always to secure for the women comparable gains in pay and working conditions,” the USNSTPA said. “For more than 20 years, the Federation has resisted any concept of equal pay or basic economic fairness for the USWNT players. Historically, the Federation also refused to include in the women’s CBA the same provisions as the men’s with respect to air travel, hotels, etc.

“This is systematic gender discrimination that should have never happened.”

That critical statement is followed by the USNSTPA getting into some numbers, which aren’t super important into other than to say revenues tripled over the last 10 years while the men and women players did not see comparable pay raises.

“Instead, the women’s 2017-2021 CBA did not bring the women equality in working conditions and the women did not benefit from the dramatic increase in revenue associated with the USWNT,” the statement read. “In fact, in 2017 the Federation insisted the women sign a 2017-2021 deal that was worse financially than the men’s soon-to-expire 2011-2018 CBA that had been negotiated six years earlier.

“The correct comparison should be between what the women got with their 2017-2021 deal and triple what the Federation agreed to pay the men in 2011 or whatever the men negotiate in their new CBA that will be retroactive to January 1, 2019. Those comparisons are what make it clear that the Federation had no intention of compensating the women fairly.”

The biggest blow in the statement came next, and we’ll just let you read it all here, because it’s a doozy.

“Our view is as follows,” the USNSTPA said. “Yes, the women’s 2017-2021 deal is worse than the men’s 2011-2018 deal. Yes, the Federation continues to discriminate against the women in their wages and working conditions.

“We understand why the Federation’s control, not only over the USWNT but also over the only women’s professional league in the United States, the NWSL, might have created tremendous pressure on the USWNT players to get a deal done, even if it was on completely unfair and discriminatory terms. Faced with a monopolist controlling their two primary potential employers and aware that a work stoppage could destroy the third effort at a women’s professional soccer league in the United States, it is our view that the women had no reasonable alternative but to accept the 2017-2021 terms the Federation demanded.”

Here the union is accusing the Federation of forcing the USWNT players to sign an unfair CBA, knowing the players had to choose between keeping the NWSL alive — and many of their friends and club teammates employed — or receiving fair pay. The USSF subsidizes the NWSL, paying the NWSL salaries for USWNT players. Without U.S. Soccer, the NWSL would immediatel lose a massive source of money to stay afloat in these important early years.

The statement then asked the USSF to just pay the women more — much more.

“What we believe should happen is simple,” the statement read. “Pay the women significantly more than our recently expired men’s deal. In our estimation, the women were due at least triple what our expired deal was worth in player compensation.”

As the statement drew to a close, the USNSTPA made its most blatant attack on the Federation’s actions, calling the USSF out for increasing its legal fee budget while refusing to increase pay for the best women’s soccer team in the world.

“Has the new leadership of the Federation simply admitted that what the former leadership did was wrong?” the USNSTPA asked. “Have they offered to negotiate a new, fair deal with the USWNT representatives? Of course not. Instead, the Federation has doubled down on its misconduct.

“Rather than promote the sport of soccer in positive ways, they are involved in constant disputes and litigation. Rather than share the massive surpluses the women helped generate with the players, they are using those funds to dramatically increase the Federation’s annual legal fee budget to over $10 million to try to impose massive legal fees the women cannot afford. They’re lobbying and using every legal trick in the book to try to distract Congress, the Judge, and the soon-to-be-empaneled jury.”

Finally, the USNSTPA called for the courts, juries, USOC, Congress or even the USSF to reform the Federation. In one of the most damning moments of the entire statement, the union compared U.S. Soccer to a corrupt FIFA.

“The exploitation of athletes to generate revenues that are siphoned off to benefit owners of for-profit leagues and teams, Federation personnel with massive above-market salaries and bonuses and self-promoting all-expenses-paid Federation ‘volunteers,’ must end,” the statement read. “The practice of paying multi-million-dollar bonuses to personnel associated with the Federation for running various Federation-controlled tournaments in the United States should be investigated and outlawed.

“Soccer is perhaps the most corrupt sport in the World. We do not want a US Soccer Federation that behaves like FIFA.”

The statement ends by asking U.S. soccer fans to support the players — and not the Federation — by refusing to support USSF sponsors and writing Congressional representatives.

“Support the players, not the Federation,” read the final poignant words of the statement.

It will be interesting to see how the U.S. Soccer Federation responds to this statement.