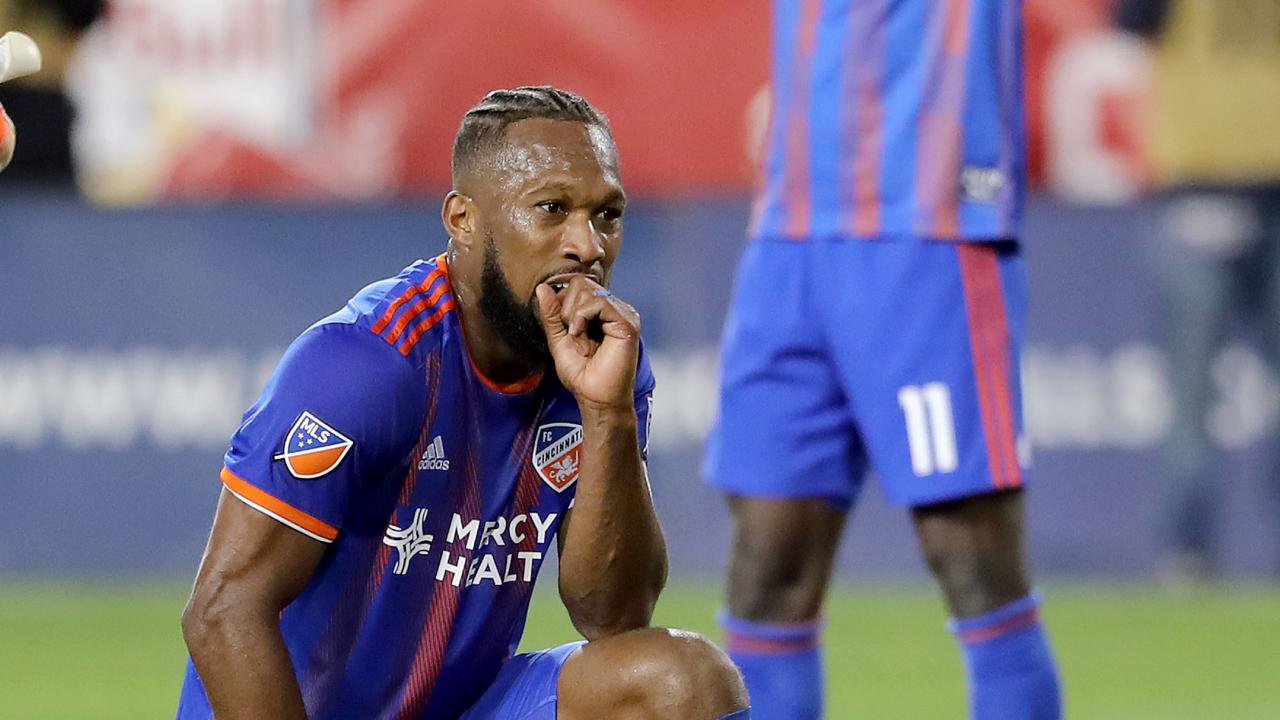 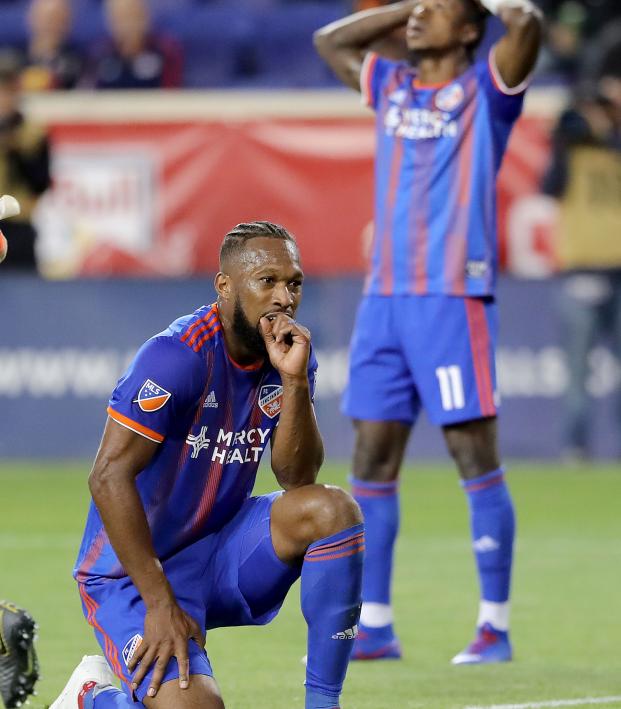 Nick Rumpf February 11, 2020
The club is looking to improve on one of the worst inaugural seasons in league history.

FC Cincinnati fans had high hopes coming into the club's inaugural MLS season. They had every right to — the club had been riding a wave since its inception three years earlier. In 2016, Cincinnati set an Ohio state attendance record when it played host to Premier League side Crystal Palace for a July friendly. The next year, it upset intrastate rivals Columbus Crew in front of a crowd of 30,000 en route to becoming the first second-division side to appear in the U.S. Open Cup semifinals since 2011. All indications were that this was a side ready for the top division.

Any hopes the club had of emulating Atlanta United's almost-instant success in MLS soon came crashing down to Earth. The club set records in its opening season — but they were the sort of records no club desires. FC Cincinnati allowed the most goals of any MLS side in history (75) and posted the league's worst-ever goal differential (-44). Head coach Alan Koch lasted until May before being replaced by Yoann Darmet on an interim basis, as the 29-year-old became the youngest boss in MLS history. Faced with no small task in attempting to turn around a fledgling Cincinnati, Darmet too struggled before the arrival of Ron Jans in August.

Jans and general manager Gerard Nijkamp, hired by the club in May, have had to oversee a substantial retooling in the offseason. While it is doubtless a challenge to turn around one of the worst-performing clubs in league history, the overhaul appears to be going well in the buildup to opening day of the 2020 season on Feb. 29. Despite falling short in its push to sign PSV's Gaston Pereiro, the club managed to land a marquee signing with the acquisition of Jurgen Locadia, 26, on loan from the Premier League's Brighton. Locadia, who just two years earlier became Brighton's club-record signing, could do the same for Cincinnati if both parties agree to make the move permanent in July.

The Dutch attacker, who upon signing became the sixth-most valuable player in MLS per Transfermarkt ($11 million), will be the figure head of the club's attacking realignment. He will look to add a spark to an offense that produced just 31 goals last season, 10th-lowest in league history. Despite struggling for game time at the Bundesliga's Hoffenheim, where he spent the first half of this season on loan, Locadia scored four goals in just 526 minutes of action. The club will hope he can reproduce the form he showed in his home country with PSV, where he totaled a strong return of 62 goals and 39 assists in 176 appearances. Capable of playing anywhere across the front, Locadia will likely lead the line for Cincinnati as he has spent the majority of his career at center forward and been most productive in that position.

Joining Locadia in replacing Fanendo Adi, since departed for rival Columbus, is Japanese forward Yuya Kubo. Kubo arrives from Belgium's KAA Gent having struggled for game time this term, but with a respectable record in Europe. Another player capable of playing several forward positions, Kubo has seen the most action as a center forward or second striker. He arrived in Belgium off the back of a strong spell with Switzerland's Young Boys, where he scored 39 goals and assisted another 15 in 137 appearances. Prior to heading stateside with Cincinnati, he scored 25 and assisted six for Gent. With observers variously claiming his best position as right winger and No. 10, it's clear Kubo provides Jans with options in terms of setting up his attack.

Jans is excited about the signing of young forward Brandon Vazquez from Nashville SC as well. Only having arrived in Nashville at the league's newest club after December's expansion draft, Vazquez spent the previous three years playing backup to Josef Martinez in Atlanta. In 32 appearances there, including seven starts, he produced three goals and two assists. He is seen as a player with loads of potential and will be given the chance to grow at Cincinnati — the signings of Locadia and Kubo mean he will not be under pressure to start contributing heavily straight away. Jans praised his attitude, saying, "He's so eager to perform and score goals. ... He cannot carry the team yet, but he could be a very big surprise. I think when he hears this, he might say, 'I will show you, Coach.' ... Let him do it."

With the 29th pick in this year's MLS SuperDraft, Cincinnati brought in Rey Ortiz from the University of Portland. Ortiz, an attacking midfielder who previously spent time in the Los Angeles Galaxy academy, tallied 14 goals and 26 assists in his four years at Portland. He ranked third among all players in the nation in 2017 with 13 assists, earning an All-American selection that season. If he can use preseason to secure a spot on the roster, Ortiz would add some much-needed creativity to a core of central midfielders that produced just three assists combined last season. Ortiz will be looking to make his ability to pick a pass at the college level translate to MLS, where he can provide chances for a forward line that often found itself starved of service last term.

The club has also moved to address the porous defense, which suffered through last season. Nijkamp has brought in Dutch defender Maikel Van der Werff on a free transfer from Vitesse. With almost 140 Eredivisie appearances and seven Europa League games under his belt, the 30-year-old will add experience and, hopefully, stability alongside captain Kendall Waston. Van Der Werff is a proven leader; having captained Vitesse, he immediately took up the armband for Cincinnati in a preseason friendly against Phoenix Rising FC. His teammates, recognizing his qualities, urged him to lead them out on to the field and he was happy to oblige, saying, "It's an honor to be the captain of the team. I can be proud of it. It's always good to be captain and I take the responsibility. Why not?"

Not stopping there, the club has also brought in another central defender to address the problem position. Swedish defender Tom Pettersson arrived on a free transfer from Ostersunds FK, where he had spent the last three years. He made over 100 appearances for the club after arriving in 2017 from Goteborg and, like Van der Werff, brings no shortage of experience to the side. With 171 appearances in the Swedish top flight to his name, Pettersson has also played in Belgium and has made 24 Europa League appearances as well.

Thanks to a significant turnover this offseason, things appear to be looking up for FC Cincinnati as the club heads into its second MLS season. Nijkamp has begun to implement his plan to turn the club around and firmly believes in Jans as the man to work toward that end. Cincinnati showed its desire to improve right away with the ambitious signings of Locadia and Kubo and has added experience and leadership to the league's worst defense in a bid to stop the leaks. It has also brought in young talent with Ortiz and Vazquez, who could potentially become long-term fixtures in the team with the right environment to develop and proper coaching. With these new additions and a core of players left over from last season, Cincinnati is aiming high and has its sights set on the playoffs for the 2020 season.