MLS SuperDraft Was So Bizarre It Was Almost Entertaining

Travis Yoesting January 9, 2020
Nashville made its first-ever pick by showing up at the dude’s giant house, because that’s the American dream.

The MLS SuperDraft is one of the weirdest things in sports. It probably shouldn’t exist, and if the league is smart, the MLS draft won’t exist much longer. To make matters worse, the second pick of the 2020 MLS SuperDraft on Thursday perfectly highlighted what’s so obviously wrong with soccer in the U.S.

There are many good reasons for drafts in sports like basketball and American football, where going from college ball to pro ball is the primary avenue for joining the top league.

In soccer, where the best players don’t play college ball (and in fact NCAA soccer can hinder development), a draft makes little sense. Add in ridiculous rules — last year FC Cincinnati called at timeout before its first pick, the very first one in the draft — and overly complicated club spending limits and the MLS draft is one of the most unnecessary manifestations in the world of soccer. The Philadelphia Union, as it did last year, completely opted out of the first couple rounds and presumably would’ve traded all their picks if they could’ve, because who wants to actually follow college soccer?

We've sent our First Round @MLS #SuperDraft pick to @DCUnited.

But god damnit, Major League Soccer made this year’s draft weird and we kind of loved it.

Now, don’t get us wrong — it was still completely pointless. But at least MLS had some fun with it.

MLS did away with following the boring-as-hell NFL/NBA model of having a commissioner announce the names and the player comes up to don an ill-fitting cap. Instead, the top MLS draft picks were called out by representatives of the picking team. As the draft wore on and the picks were less interesting — one might argue all picks were uninteresting — the broadcast just told us who was picked with no fanfare. MLS understood there really isn’t any fanfare to be had with most of these picks, so the broadcast just went straight to analysis, explaining to the audience who the hell these folks are. 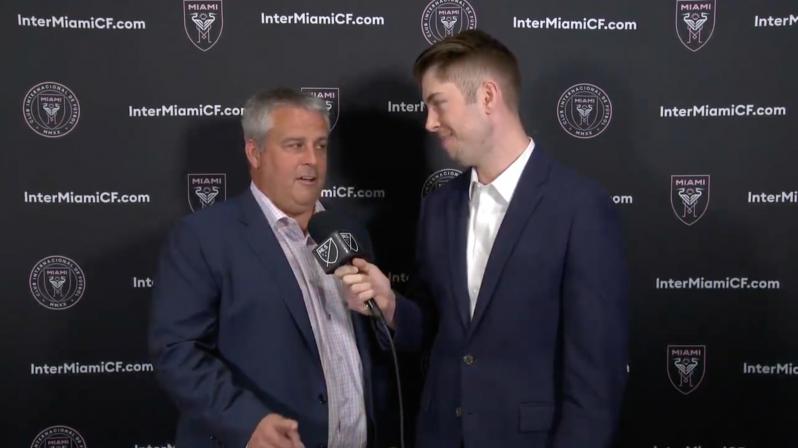 And with the first pick of the 2020 MLS SuperDraft, Inter Miami selects a tie for these two chumps.

The broadcast was primarily hosted on ESPN’s YouTube channel, with Adrian Healey joined on set by Taylor Twellman (?!) and Matthew Doyle. The broadcast featured coach interviews, including Thierry Henry and Tab Ramos, plus behind-the-scenes images from the draft rooms of a number of clubs.

It was still boring af, but at least it had its moments.

The weirdness started with the first pick of the day, which belonged to David Beckham’s Inter Miami. An on-site reporter held up a mic to Miami’s Sporting Director Paul McDonough and he just said who the club was picking: Clemson forward Robbie Robinson.

Soon, Robinson was put into a Skype call with Becks himself. The audio, as one would expect, was absolute shit. And Robinson didn’t seem all that interested in chatting with his new boss.

David Beckham on line one! pic.twitter.com/Ylguv1aIq7

Nashville SC, with its first pick, opted for Indiana defender Jack Maher. To announce the pick, Nashville took a bus full of fans and technical director Mike Jacobs to the dude’s house. This is a cool way to announce your club’s first-ever pick, though it would’ve been pretty hilarious if Inter Miami had taken Maher first. 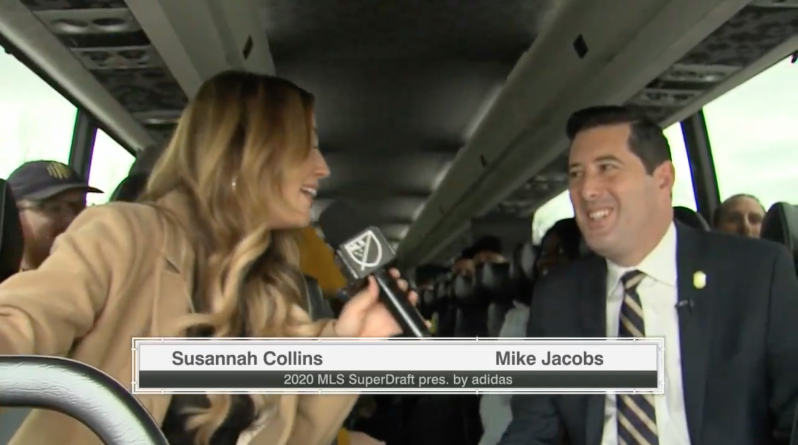 Mike Jacobs looks ready to coach UTEP to a win over Kentucky in the 1966 college basketball title game.

As the reporter at the scene Susannah Collins said at the time, it was like something out of the Publisher’s Clearing House, only with far less money was involved.

Because this is America, where soccer typically rewards the rich and ignores the poor, the house Nashville’s bus pulled up to was enormous. The beautiful home had a huge room where dozens of friends and family had gathered. So grand was the house they didn’t even hear the bus full of rowdy fans pull up.

It was the perfect encapsulation of the MLS draft and everything wrong with U.S. soccer: wealthy white kid gets picked to play even though he clearly doesn’t need the money.

Compare this to the NFL draft. Having covered such events in person, I can say the houses hosting NFL draft parties for their kids are almost always far smaller than Maher’s. This isn’t to say Maher is a bad guy and didn’t earn his draft spot, merely to say the way soccer works in America almost always benefits those with the money to pay to play.

Following the third pick, which was posted to MLS’s website well before the YouTube broadcast announced it, I honestly kind of tuned out for the rest of the draft, because, you know, it’s still a stupid draft. Fans who are super into the NFL draft are, to me, one of the great mysteries in life, right up there with what happened before the Big Bang, why Dr. Pepper tastes so good and my cat.

There was one more moment that stood out to show how inane the whole process was. When Henry Kessler was picked sixth by New England, he was given an Orlando City scarf by someone next to him for some reason. Kessler, a Virginia defender, was eventually given a Revs scarf. Fortunately, the family had a table with one scarf from every club, clearly not worried about the expense of buying 26 scarves at about $25 a pop (about $650). Hopefully they kept the receipts.

The YouTube broadcast ended with the conclusion of the first round so that’s about where our interest ended, if not long before.

You can check out the full list of draftees here, but we’re pretty sure you won’t recognize any of the names.