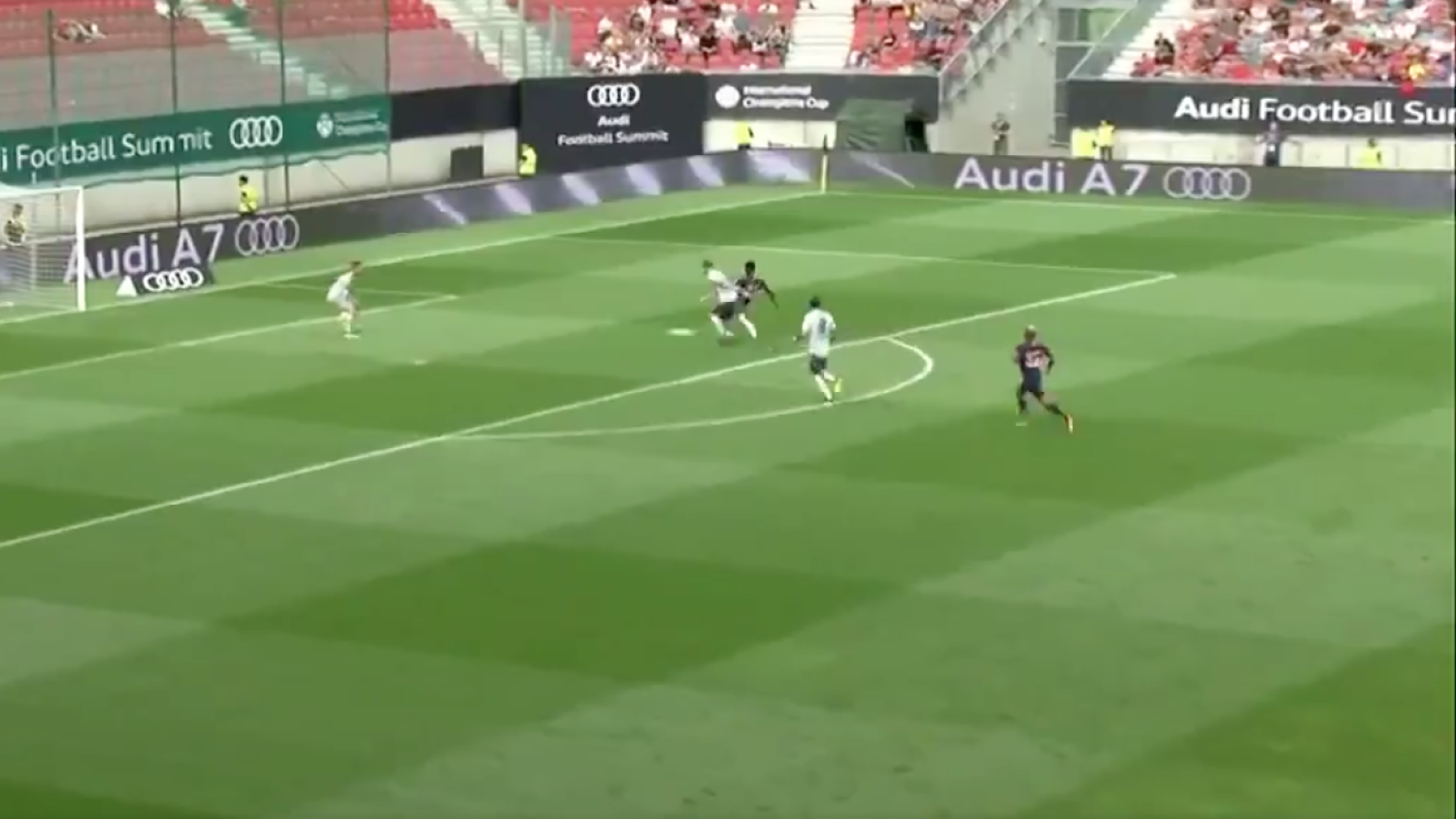 Timothy Weah faces a massive uphill battle to get playing time at Paris Saint-Germain. It’s not so much that the 18-year-old American hasn’t shown quality during his brief time in the French capital but the players ahead of him in the pecking order. But the Weah goal vs Bayern Munich on Saturday was strong proof of what the youngster can do when given a chance.

None of the World Cup players for either side was present for Saturday’s International Champions Cup match, which Bayern Munich won 3-1. Without Edinson Cavani, Neymar and Kylian Mbappé with the squad in Austria, younger players had the chance to show new PSG boss Thomas Tuchel what they can do.

Weah, son of Liberian president and former Ballon d’Or winner George Weah, made a strong impression with a goal that tore apart the defense of the reigning German champion.

The Weah goal vs Bayern Munich began with Kevin Rimane stepping up to intercept a pass and finding Weah’s run up the heart of the Bayern defense. Weah made a great move and showed pace and power before finishing like a veteran. To be fair, the man he torched was fellow 18-year-old Josip Stanisic and not one of Bayern’s veterans, but Stanisic couldn’t do anything to slow Weah down.

The Weah goal vs Bayern Munich won’t put the American into the starting lineup for any big matches anytime soon, but it does show Tuchel he’s a strong asset off the bench when someone like Cavani needs a rest. Weah played the full 90 minutes, switching from lone striker to winger amidst a barrage of second-half subs.

Last season, his first in Paris, saw Weah given three appearances in the spring, including a start against Caen. He has three caps with the senior USMNT, including a goal against Bolivia in May.

While Saturday's match was mostly full of youngsters, there were a few veterans. Arjen Robben, Franck Ribery and Javi Martinez started for Bayern Munich while PSG showed off new signing Gianluigi Buffon, who left Juventus after 17 years. Ultimately, it was the depth of Bayern Munich that proved to be greater.

Buffon made a couple good saves and was himself saved by Rimane when he was caught out of position early in the second half. Martinez was able to find a way past Buffon with a header off a corner in the 60th minute.

Buffon was subbed off soon after and his replacement, Rémy Descamps, made his first order of business picking the ball out of the back of the net after a blistering free kick from Renato Sanchez, who probably thought he was passing it out of bounds.

Dutch 17-year-old Joshua Zirkzee made it 3-1 in the 78th minute, denying Weah of being the youngest goal scorer in the match. Former Arsenal winger Serge Gnabry did much of the hard work to cut the ball back for Zirkzee to hammer home.

The Weah goal vs Bayern Munich made it 2 for 2 for Americans providing goals in the International Champions Cup. On Friday night in Chicago, Christian Pulisic drew a penalty for Tuchel’s former club, Borussia Dortmund. Mario Götze converted the PK for a 1-0 victory over Manchester City.