Is This The Death Of Italian Football As We Know It?

Huw Thomas November 14, 2017
After Italy vs. Sweden, many have tried to claim that this is the end of Italian dominance. We look closely at whether this is true.

People have started to write the obituaries for Italian football.

Italy is a young nation. It has old cities, even older cultures. But, as a country, it was only unified in 1861. That’s only slightly older than the form of codified football we know today. It should be no surprise that Italy has traditionally been so close to football: it’s simply a question of historical proximity.

Even before the nation itself existed, the warring city states on the Italian peninsula were prototypical versions of club sides: even warring families within the same towns formed an early version of the derby traditions in Genoa and Milan.

It’s impossible to comprehend a Serie A without an Italian national team. The two have grown up in tandem, the national side fostering a love of football with World Cup victories, the club sides kindling the flame by becoming among the most storied, best known teams in the world. The Italian national identity – the very idea of Italy as a unified nation – is informed by their four World Cup victories.

So not qualifying for the World Cup is, officially, a Big Deal.

This week, Italy contrived to lose by a single goal across two legs in a World Cup qualifier against Sweden. This is the Big Deal. This is why the obituaries are being written. This is why the front page of the Gazzetta dello Sport is dedicated entirely to a picture of a weeping Buffon and the words, writ large: FINE. The end. 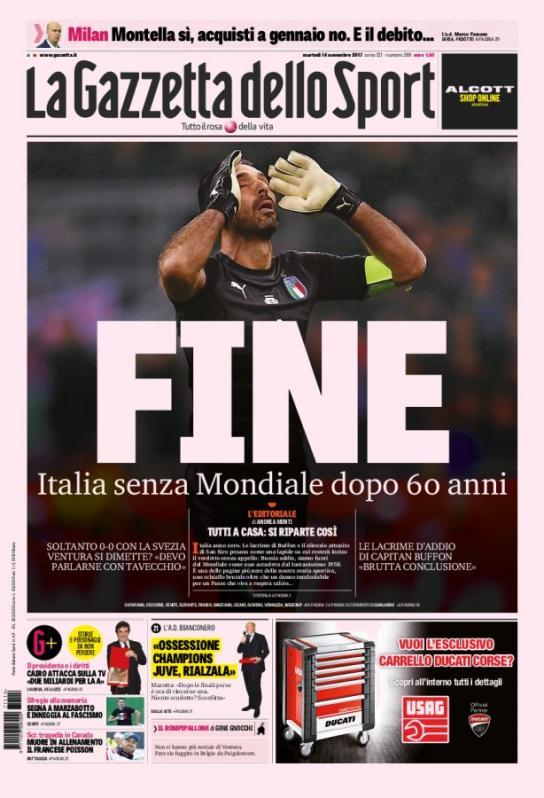 The lead editorial in the same paper takes an apocalyptic tone. Imagery of the rapture, of sinking ships. It’s the same across the other news outlets. This is not being taken lightly.

However, amid all this clamor, this performative exhalation of the death of Italian football, it’s easy to apportion blame where it does not belong. There are a few simple causes of this failure and they can be addressed quite easily, some more than others.

The most obvious of these is the manager. There is simply nothing good to say about Gian Piero Ventura at this point. The man is so obviously incompetent, so clearly out of his depth, and so thoroughly devoid of any coaching acumen that it seems unnecessarily vicious to criticize him.

Ventura will go down in history as one of the worst – if not the worst – coach in the history of the national team after the Italy versus Sweden tie, This is punishment enough: his entire legacy is tarnished, he is set to become a byword in incompetence. 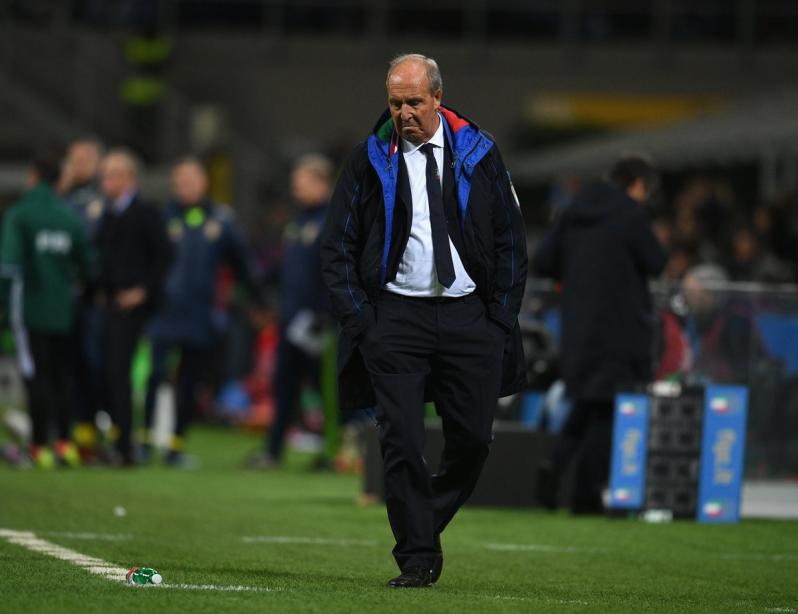 But that does not mean that we should not note his major failings. There are two broad categories here: system and personnel.

Firstly, an arrogant commitment to playing his favored formations, such as 4-2-4, despite all the evidence demonstrating why these ideas were utterly without merit. Right after the game against Spain, when Ventura had insisted on implementing this system, he should have been placed into a ceremonial canon and shot as far as possible into the Mediterranean Sea. He was allowed to struggle on, his idiocy now markedly visible to all.

Even when he reverted to playing a back three – a comfort blanket for the modern Italian coach – this system outstayed its welcome. Chasing an essential goal in the last minutes of the qualifier, Italy were still fielding three center backs. Not even playing them up front, hoping to steal a header. Over the course of this qualifying campaign, it’s been one tactical abomination after another.

Then there’s the player selection. Rarely has a footballing failure ever been less the fault of the players. They were coached poorly, played out of position, and – in a few important cases – not played at all.

Jorginho, for instance, has been one of the best midfielders in Italy for the past 18 months. A Brazilian who moved to Italy at a young age, he was eligible for both national sides. Only when the South Americans made inroads into possibly selecting the player did he finally receive a call up. Even then, he didn’t start the first leg against Sweden.

He did, however, start the second leg. And he was excellent. Jorginho’s every touch was a damning indictment of Ventura’s refusal to play him until the very last moment. The chipped through balls and the smartly-recycled possession being exactly what was needed to bring the best out of the Italian midfield. If only he’d been there from the start, rather than jammed in at the last moment.

Chance for #Italy! Excellent splitting ball by Jorginho to find Immobile's run, but Olsen made the save and Granqvist cleared it out. #Sweden #ITASWE #ItalySweden #UEFA #WCQ pic.twitter.com/KfgqamJnpa

Lorenzo Insigne, too. Another Napoli player and possibly the most exciting, thrilling Italian to watch right now. Throughout the campaign, Ventura has played Insigne in every position apart from the inside forward role in which he excels. Stupid, stupid, stupid. And then Insigne was left on the bench for the final game, not even used as a sub. It defies belief.

There’s a clip taken from the television of one of the coaches calling on Daniele De Rossi to come on as a sub. De Rossi argues, pointing at Insigne, telling the coach that they need a goal and an attacker would give them the best chance of scoring.

In the end, Federico Bernardeschi came on. Italy did not score. Even the players knew how incompetent their manager was, a sentiment which was echoed throughout the stands, more damning in every single second Insigne spent on the bench.

At every turn, Ventura proved himself utterly inept, useless, and unfit for the job.

But that leads us to another problem. What kind of management structure allows this kind of incompetence to thrive? The entire hierarchy of Italian football must take a long hard look at themselves and ask:

No answers will be forthcoming. The manager will get the sack thanks to a clause in his recently-renewed contract. The men who appointed him and allowed him to reveal his ineptitude to the world will remain. What good is one personnel change when the entire edifice of Italian football is rotting from within?

The Italian footballing bosses are meant to be the stewards of the game, the tillermen who guide the sport to its highest heights. Instead, they’re a bunch of crusty, old, bigoted men whose biggest failure is not falling fast enough on their own swords. Rip it up and start again.

There is a grain of truth to this. As a footballing nation, Italy possesses far greater resources than most countries: the ceiling for their potential achievement is incredibly high.

But with this potential, there needs to be a balance of introspection, of self-awareness. Right now, those in the footballing community are lashing out in every direction, trying to blame everyone but themselves.

For instance, men like Fabio Cannavaro are lamenting the presence of so many foreign players in Serie A. This figure stands just over 50%, middling for a European league. As an aside, Cannavaro is currently the manager of a Chinese side, having switched from another Chinese side, and he deserted Juventus at their weakest moment, choosing to flee to a foreign team after Calciopoli. As great a player as he was, he seems to be breaking new grounds in the realm of hypocrisy.

More so, such sentiments worryingly echo the head of Italian football. Italian Football Federation president Carlo Tavecchio is on the record as having said, before his election, that Serie A was becoming flooded with “banana eaters.” He was elected anyway and continues to occupy his position. Stupid people saying stupid things to distract from their own inadequacy.

Even then, Juventus, Milan, Fiorentina and Atalanta field many Italian players every match. The best Italians at Napoli are consistently overlooked for selection. The talent is there, even if it might not match the pool of resources available in 2006. They are simply not used in the correct manner.

Blaming foreign players for a nation’s failure is a familiar trope. It happens in England all the time. Now, England’s national set up is being restructured around the thinking of an Argentine: Mauricio Pochettino has done more for England in the last five years than five decades of English desperation. But still the same xenophobic mutterings swirl around every failure.

Italy is not quite the same, in that they are perhaps one of the greatest producers of coaching knowledge and wherewithal in the world. What’s more, they have good players. Individually, they certainly have better players than Sweden. What good is having a hundred more Italians in the league if their coaching and their footballing federation so consistently fails them?

Instead, the lashing out at foreign players is an easy, facile and predictable move. It chooses to ignore the real problems, chooses to shy away from introspection and admission of guilt, in favor of blaming a foreign other. It’s not our fault, they cry, it’s those damn foreigners.

This is the hubris of the Italian footballing psyche. It cannot possibly be a fault of the coach, or the management, or the team. There must be someone else to blame, some outside corruption which has stepped between the national side and their God-given right to play at the World Cup.

There are people to blame for Italy’s failure. But as the guns turn outwards, as the obituaries for Italian football are written, they will deftly ignore the root causes of the problem. Instead, there will be a blaming of foreigners, of individuals or outside influences. The Premier League’s money or FIFA’s corruption. A bribed referee or the fact that VAR was not used.

This is not the end of Italian football. But it could be beneficial. It could provide a moment to look deeply at the issues which exist in Serie A and the national side. But it won’t be used as such. People always prefer easy answers, answers which don’t place them at fault.

Within the next few weeks, there will be serious calls for quotas of Italian players in Serie A. At that point, we will know that no lessons have been learned at all. Even if we expect nothing, we can expect to be disappointed. Everything remains the same.