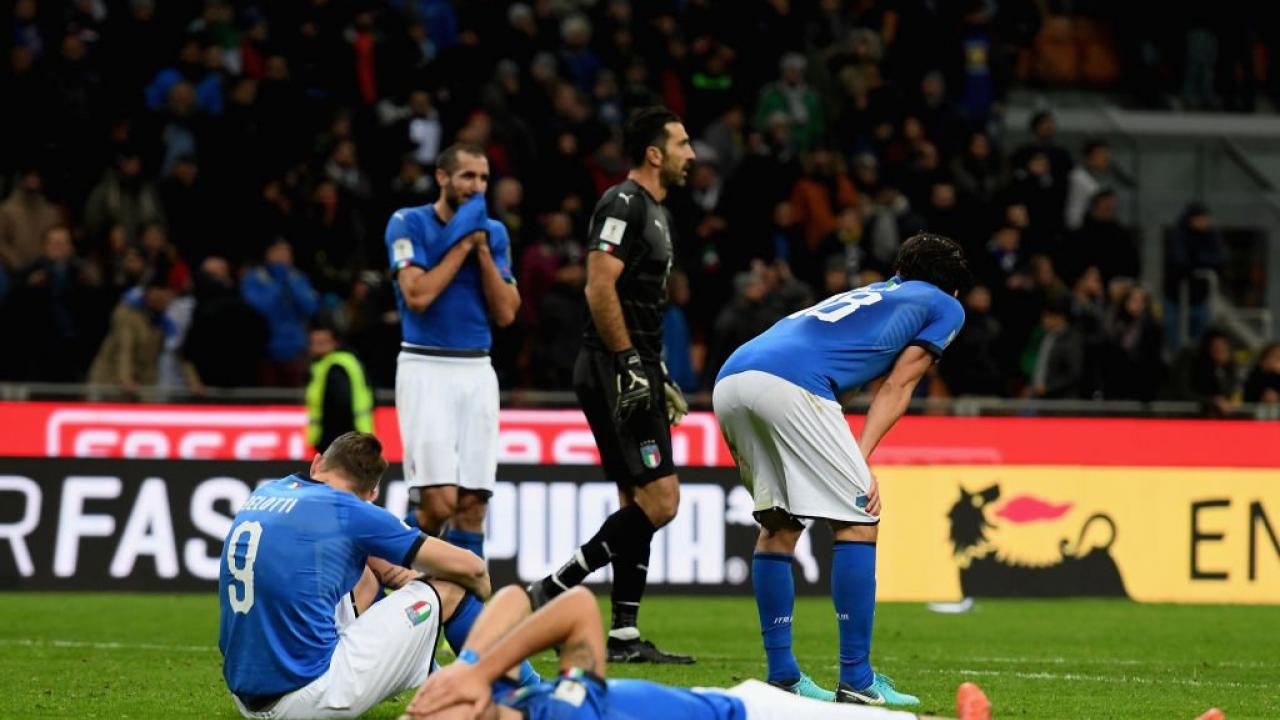 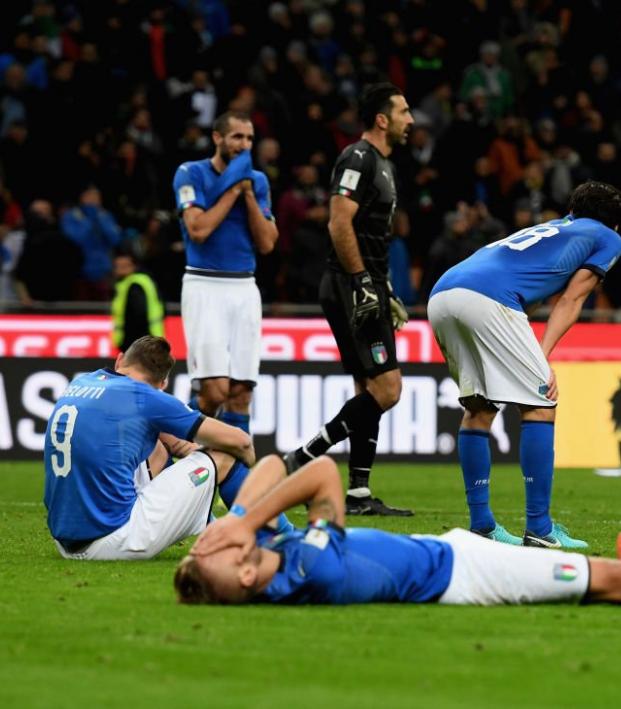 Travis Yoesting November 13, 2017
A number of players have already joined Gianluigi Buffon in retiring from the Italian national team.

This is the official end of an era for the Italy national team. After a 0-0 draw with Sweden on Monday, combined with a 1-0 defeat on Friday, Italy will not be at the 2018 World Cup, ending a run of 14 straight World Cup appearances. The dominoes are already falling in the aftermath of the Azzurri failing to qualify.

The four-time world champions had only once failed in a bid to qualify for the World Cup, and that came under bizarre circumstances in 1958. Prior to that, Italy had missed one other World Cup when it chose not to participate in the inaugural tournament. But this qualifying campaign was not bizarre, unless you count the lack of quality as bizarre.

“It’s a black moment for our game,” Italy's Daniele De Rossi said. “Unfortunately there will be a lot of time to analyze it. The only thing I can say is that we showed few ideas and not much in the way of tactics.”

The tears in Italy were still flowing when players began dismissing themselves from the team. It’s long been known Gianluigi Buffon would retire from Italy after the 2018 World Cup, so it was no surprise when he confirmed he’d step aside. Giorgio Chiellini, Andrea Barzagli and De Rossi joined him in international retirement. More could follow that group in the coming days as players come to grips with the fact they will not be playing in the World Cup next summer.

Early reports that Italy coach Gian Piero Ventura had resigned proved unfounded, but if he lasts more than a day it’ll be the most surprising survival story since Jon Snow.

“I’m not resigning because I haven’t spoken with the (federation) president,” Ventura said. “We need to evaluate things. We’ll see. I’ll talk with the federation and confront the problem.

“I feel I have to apologize to Italians for the result.”

Despite its inevitability, the international retirement of Gianluigi Buffon, 39, will be the single biggest fallout from Monday’s setback. The legendary goalkeeper was playing for Italy for the 175th time and could have reached a world record sixth World Cup had his team scored at least one goal. Instead, a highly deflected effort in the first leg will be the goal that keeps Buffon from extending his playing careers with the Azzurri.

Gigi #Buffon crying on Rai TV after the match. Terrible.

| #Buffon: "I'm not sorry for myself but all of Italian football. We failed at something which also means something on a social level. There's regret at finishing like that, not because time passes." #ItalySweden

| #Buffon: ""We have pride, strength and we're stubborn. We know how to get back up again as we've always done. I'm leaving an Italy side that will know how to speak for itself. Hugs to everyone, especially those I've shared this wonderful journey with."

De Rossi, 34, is another leaving legend for Italy. With 117 caps, the defensive midfielder ranks behind only Buffon, Fabio Cannavaro and Paolo Maldini on Italy’s all-time list. At one point during the 0-0 draw with Sweden on Monday, De Rossi was spotted arguing with an Italian coach, reportedly saying offensive-minded Lorenzo Insigne should go into the match instead of the defensive-minded De Rossi.

#DeRossi: "What the hell are you putting me in? We don't need to equalise, we need to win!" and points #Insigne pic.twitter.com/axbR2DEteo

De Rossi did scored 21 goals in his time with Italy, but never saw the pitch Monday as Ventura ended up putting Federico Bernadeschi on instead of De Rossi or Insigne. It didn’t work.

Juventus center backs Barzagli, 36, and Chiellini, 33, had 171 national team caps between them but will not play again for Italy. At least Chiellini won’t have to worry about getting bit at next summer’s World Cup. The third peg of the Italian defense, Leonardo Bonucci, will be 35 by the time the 2022 tournament rolls around, so his involvement in another World Cup is questionable.

The defense will certainly be reshaped no matter who returns and 18-year-old Gianluigi Donnarumma is likely to get an early start at replacing Buffon in goal. While there is more youth higher up the pitch, none of them showed any ability to score over the two legs with Sweden.

Brazilian-born Jorginho showed flashes and Ciro Immobile had the best chance of the match on Monday, but there was a serious dearth of attacking talent on Italy’s roster. There was no Andrea Pirlo to create, no Francesco Totti to drive the team forward and no Alessandro Del Piero to finish. Andrea Belotti, Insigne and Immobile are young enough to figure into the next World Cup cycle and even Mario Balotelli, 27, could be brought back into the fold. But whoever coaches Italy during the next few years will need to find new options up front. 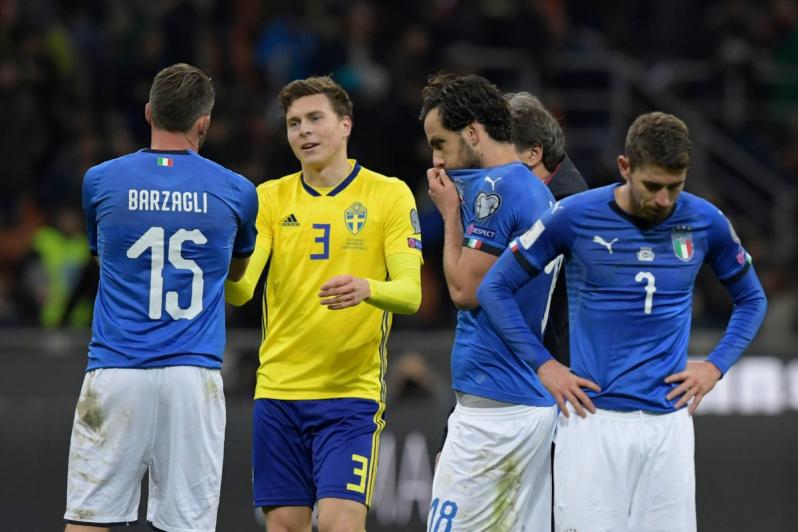 Italy’s World Cup qualifying failure will be hard for many Italians to grasp. Imagine how Americans felt after missing out for the first time since 1986 and double the surprise, grief and agony of missing the greatest tournament in the world for the first time in 60 years.

Italy, like the U.S., Netherlands, Chile and all the others who missed out on the 2018 World Cup, will have plenty of time to consider this catastrophe. But the dominoes are already tumbling and the coming days will see even more fallout in Italians soccer.

But because sport is a zero-sum affair, with the Italian anguish comes the other side of the story: Swedish elation. So to end this story on a happy note, watch the joy of the Swedes as they absolutely wreck an on-pitch desk following their victory over Italy.