Bayern Board Soaked By Beer After Incredible Winner In Der Klassiker 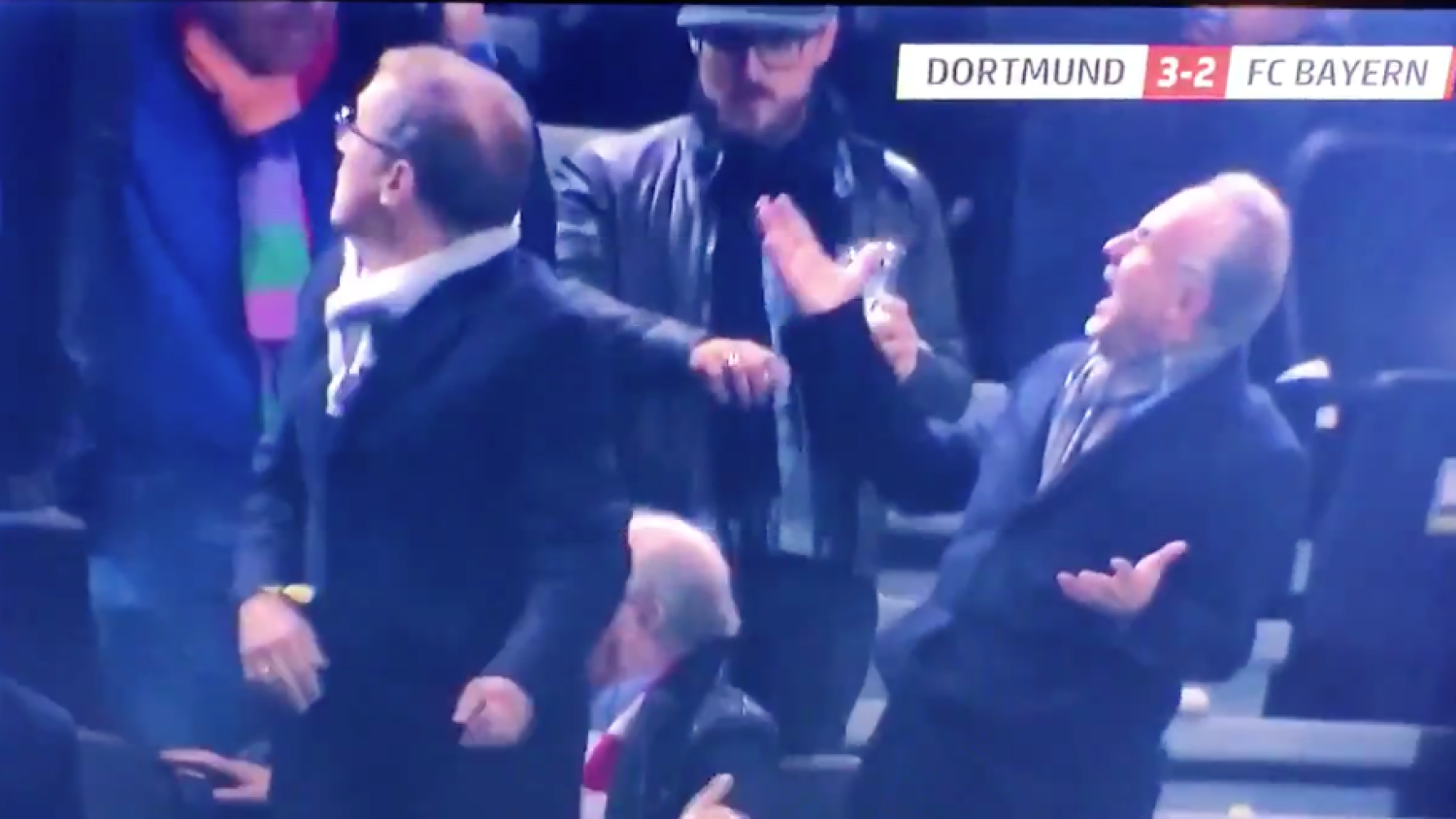 While soccer fans around the globe were disappointed by the postponement of the first leg of the Copa Libertadores final on Saturday, fans were treated to a 3-2 thriller between rivals Borussia Dortmund and Bayern Munich in Germany.

And few of the Bayern board members got as wet as the Bombonera pitch after Paco Alcacer’s thrilling winner for Dortmund.

Borussia Dortmund twice fell behind to six-time defending champion Bayern Munich and twice rallied back before Alcacer notched the winner in the 73rd minute in an instant classic that included some late drama.

Sadly, the biggest match in Europe on Saturday was relegated to FS2 by the buffoons at Fox who have a long history of showing little regard for the sport of soccer. A college football match between TCU and West Virginia was shown on FS1 while FOX was showing Ohio State at Michigan State.

USMNT star Christian Pulisic did not make it into the match. Lately he’s been trading off time with English youngster Jadon Sancho, Pulisic chosen in Champions League matches and Sancho in the Bundesliga. The two have often subbed in/out for each other, but Lucien Favre opted to keep Sancho in for the entirety of Saturday’s match.

Dortmund came into the match with a four-point lead over Bayern, having yet to lose in the Bundesliga, but with a 6-0 loss to Bayern in the back of their minds from their last meeting.

Despite playing on the road in the intimidating Signal-Iduna Park, Bayern controlled the early proceedings and thought it had a penalty kick on a hand ball from Axel Witsel. The German giants eventually took the lead in the 26th minute.

A horrible Franck Ribery cross helped set up Bayern Munich’s first goal. The French winger shanked a cross to the top of the box where Joshua Kimmich sent the ball back to the right flank to Serge Gnabry. The former Arsenal man then picked out a pinpoint cross for Robert Lewandowski to smash in with his head.

While Bayern was the stronger side in the first half, Dortmund wiped out that advantage immediately in the second half when Marco Reus drew and converted a penalty kick.

Driving into the box, Reus just got a foot to the ball before Manuel Neuer, who brought his German national team teammate down. Reus smashed the ensuing spot kick into the right corner to even the game at 1-1 in the 49th minute.

Just three minutes later Bayern had the lead back, with Lewandowski again using his head to put his team in front.

Gnabry was again at the middle of the move, using a back-heel pass to Kimmich, who chipped the ball across goal for the waiting No. 9 for a wonderful goal.

Dortmund nearly equalized in the 59th minute but for a brilliant goal-line clearance from Kimmich to deny Reus. The home side had another chance a minute later when Sancho surged by Mats Hummels before playing the ball in to Alcacer, but the Spanish striker couldn’t get the shot off in time before the defense arrived to block him off.

Reus wasn’t to be denied in the 67th minute when he equalized once again with a magnificent first-time shot. The skill, power and accuracy involved in this finish made it unstoppable for Neuer.

Dortmund finally took the lead through Alcacer, who just can’t stop scoring right now since leaving Barcelona on loan. Witsel played the oddly wide-open Spaniard in on goal and there was only going to be one outcome one-on-one with Neuer given his current form.

The worst part for the Bayern brass, who have been unrealistic to the German media this season in response to a slow start, was members of the club’s board getting showered by beer after Paco Alcacer’s winner.

It was a dick move from the Dortmund fans, but a couple rich old guys getting beer on them isn't the end of the world.

Bayern didn’t go down without a fight, pushing hard for a late equalizer. Lewandowski scored in the dying moments, but the assistant referee correctly ruled it offside as the Polish striker had just barely strayed offside.

The win was the first for Dortmund against Bayern since 2016. Dortmund now leads second-place Borussia Monchengladbach by four points with Bayern a full seven points behind in third place.