Meaningless 5-1 Thrashing Of PSG Aside, Arsenal Actually Seems To Be Having Fun 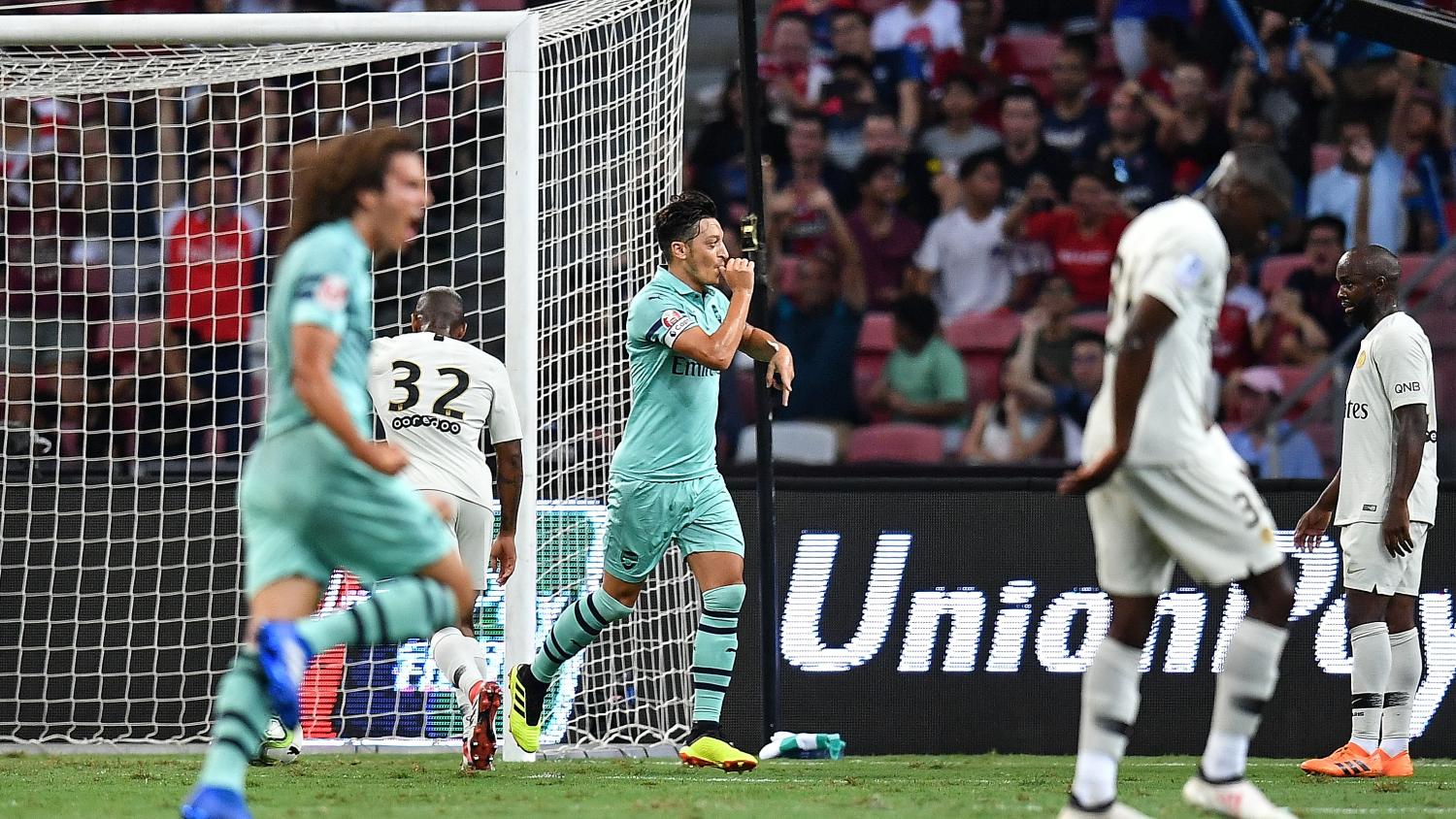 Arsenal beat Paris Saint-Germain 5-1. That was the least interesting thing about the Arsenal vs PSG match.

The Gunners are in the midst of their first preseason without Arsene Wenger since before the 1996 season. With Unai Emery coaching the club now, it’s anyone’s guess as to how Arsenal fares in the upcoming Premier League season. Do they plummet precipitously as Manchester United did when David Moyes took over for Alex Ferguson? Do they stay in place as the sixth-best team in England? Do they return to the top like Chelsea whenever Roman Abramovich hires a new manager?

But, with the Singapore portion of Arsenal’s preseason now complete after the Arsenal vs PSG game on Saturday, at the very least it appears the Gunners are having fun.

Look at Mesut Özil, Pierre-Emerick Aubameyang and Shkodran Mustafi dancing on the sideline after the Gunners went up 5-1 on the Ligue 1 champion during their International Champions Cup match.

This isn’t to say Arsenal never had fun before. But it is to say things are visibly different with the North London club.

For the last few years, every season at Arsenal has been about Arsene Wenger. The Frenchman’s revolutionary teams over the first decade in London overshadowed those in his final decade with the club, teams that were never able to replicate his early success. It was clear Wenger was out of ideas, but his presence cast a shadow over the entire club, everyone wondering when the old man would either step aside or be forced out. It put undue pressure on the players to perform for the manager they respected, even if many outside the club wanted Wenger out.

Ultimately, Wenger left at the end of last season. Arsenal replaced him with former PSG coach Emery. About two weeks out from the start of the Premier League season and the Gunners look pretty relaxed.

Prior to the Arsenal vs PSG match (and a friendly with Atlético Madrid that preceded it), Emery’s charges enjoyed their time in Singapore.

AKA The Bird Catcher  pic.twitter.com/cQnCedAvnu

The match against Atlético finished in a 1-1 draw and although Arsenal lost on penalty kicks (only one of four players managed to find the back of the net), the highlight was Emile Smith-Rowe lashing this shot from range. Smith-Rowe turned 18 on Saturday.

The moment Emile burst onto the scene on #AFCTour2018...

What a way to announce yourself to the world, @emilesmithrowe_  pic.twitter.com/91sRUiWxI6

Then it was time for some god-awful initiation songs. We'll spare you the worst of them, but if you want your eats to bleed you can check them all out here.

Mesut Özil joined the club following a World Cup respite and was given new life by support from Arsenal fans in Singapore. The German retired from international football after accusing many in his country of racism and disrespect, sparking a #MeTwo movement from Germans with diverse backgrounds.

On Saturday, Özil started and took the captain’s armband and was key to the opening goal of the match, firing home with his weaker right foot on a cross from Aubameyang.

For those that didn’t see Ozil’s goal.

Arsenal fielded a far better side than PSG; the English club had far fewer World Cup participants go deep into the tournament this summer.

Emery started a lineup close to what we can expect to see against Manchester City when Arsenal opens the Premier League season on Aug. 12. Mattéo Guendouzi was perhaps the lone outlier, but the 19-year-old French midfielder has impressed since joining the club this summer and could end up playing regularly in the Europa League.

For PSG, there was no Neymar, Cavani, Mbappé, Draxler, Verratti. The only players who started who are likely to do the same when the Champions League campaign begins were Gianluigi Buffon and Adrien Rabiot, the latter probably still smarting about being left off the France World Cup squad.

American Tim Weah started up front and drew a penalty kick, which Christopher Nkunku converted for PSG’s only goal.

Buffon was PSG’s star player of the match, making four saves in the 73 minutes he was on the pitch. Arsenal often sat back and allowed PSG possession, hitting with quick counterattacks, a strategy Wenger rarely employed. Perhaps most enticing for Gooners (and scary for EPL opponents), was a willingness to play balls over the top to speedy forwards like Aubameyang and Alexandre Lacazette, another tactic Wenger seemingly forgot about over the last decade.

Lacazette notched two goals on Buffon to chase him from the match before the fun really began. Rob Holding scored on a long header and 19-year-old Eddie Nketiah finished with a goal in the 94th minute to spark dancing on the Arsenal sidelines.

Lacazette at his haters pic.twitter.com/hLrTwBA960

The Arsenal vs PSG match doesn’t really mean much in the grand scheme of things for either club’s upcoming campaign. But Arsenal fans will be pleased to see the team can at least beat a bunch of young kids and one old man.

And have fun doing it.