In case you don’t watch Jimmy Kimmel Live regularly — and honestly, if you’re not Zlatan, why would you? — Alex Morgan and Megan Rapinoe were guests on ABC’s late-night show on Thursday.

Continuing the USWNT’s victory tour across the country, co-captains Morgan and Rapinoe, the undeniable stars of the Women’s World Cup, got to taste Jimmy Kimmel’s bland-but-fine humor stylings in interview format where he asked things like “why do the men suck” and “how did you dye your hair?”

Late in the interview, Kimmel brought up how the team has said it would not go to the White House if invited by President Donald Trump. So in lieu of a visit to the White House, where the president has made it a routine to serve mountains of fast food to sports champions, Kimmel invited Morgan and Rapinoe to feast on a pile of 5,000 chicken nuggets, complete with two actors paid to dress as secret-service members holding sauce. 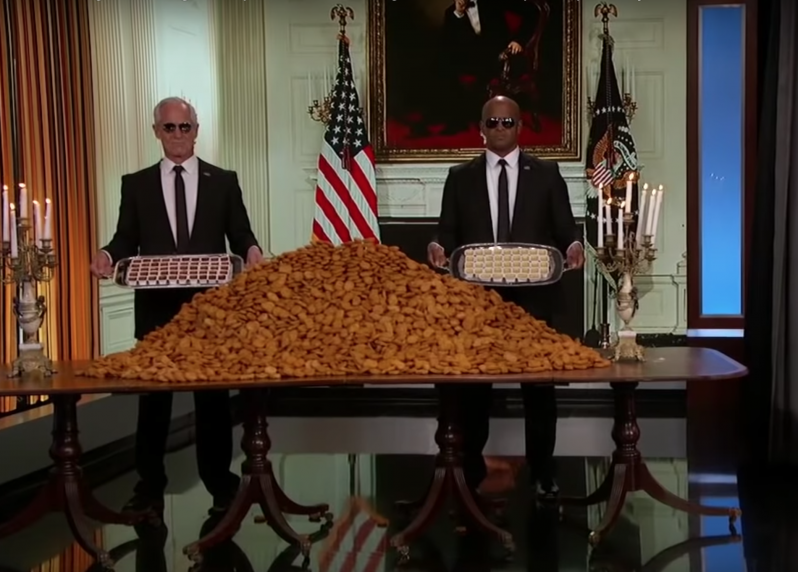 Morgan, Rapinoe and the rest of the USWNT have enjoyed a whirlwind media tour across the country since beating the Netherlands 2-0 on Sunday to win their second straight and fourth overall Women’s World Cup. The tour has included stops at Good Morning America and the Today Show, a ticker-tape parade in New York City and a cleaning up of awards at the ESPYS in LA.

So intense has the tour been that Morgan and Rapinoe both agreed this post-World Cup adventure was more tiring than the tournament itself.

Check out the full interview above, and if you want to see more of the USWNT, watch the remainder of the NWSL season, and take our quiz if you want to figure out which club to support.