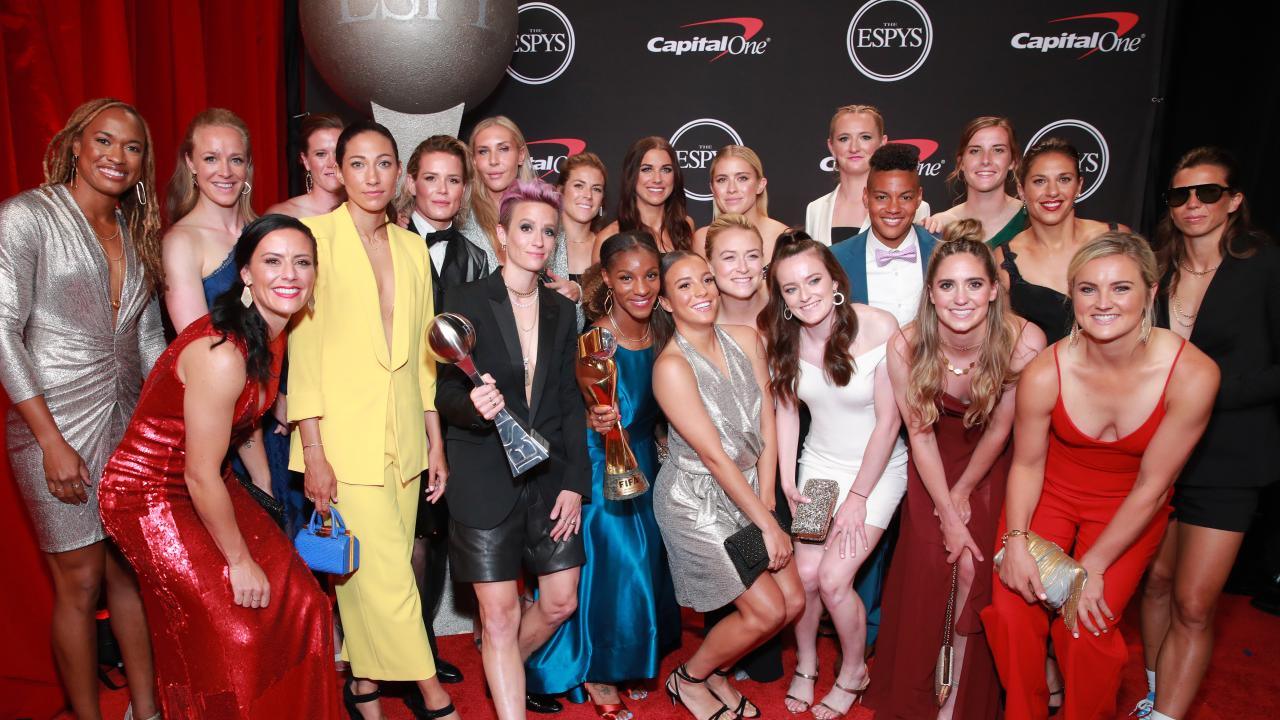 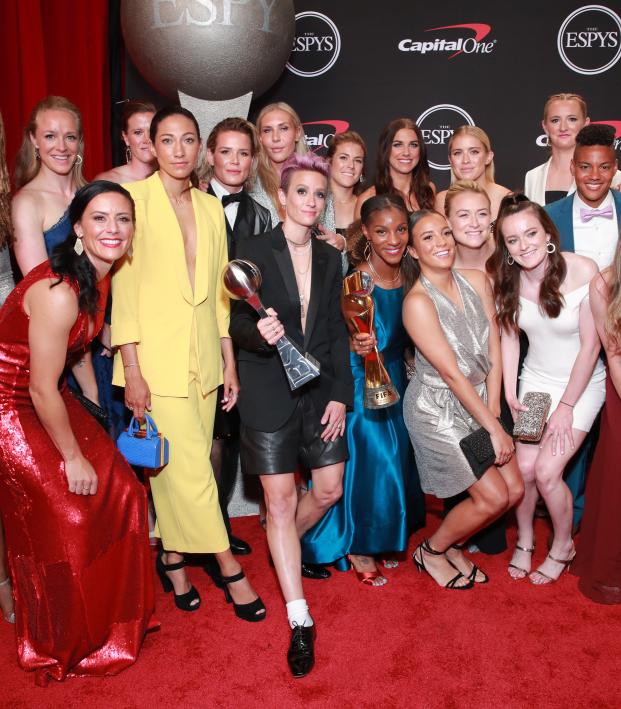 Alex Morgan, USWNT Cleaned Up At The ESPYS, But How About Megan Rapinoe’s Outfit?

The U.S. women’s national team continued its whirlwind tour around America with a stop at the ESPYS in Los Angeles on Wednesday night. Once again, the team cleaned house with two more USWNT ESPYS.

But how about those killer looks despite just flying into town?

The American players spent Wednesday morning in New York City celebrating its Women’s World Cup title with a ticker-tape parade, just the second women’s team ever to be bestowed such an honor (the first was the USWNT in 2015).

From there, the team jetted off across the country to LA. The players only had enough time to do makeup on the plane en route to the show, so whoever did the hair and makeup did an amazing job while flying through the air at three-quarters the speed of sound. I wouldn’t even be able to comb my near-non-existent hair on a plane let alone do someone’s hair and makeup.

Immediately after the parade, it was hop on a plane and then hop off a plane at LAX... with a little bit of hair and make up in between.

Because the party is still raging, the USWNT carried the Women’s World Cup trophy with it into the ESPYS, probably well aware the team would earn another trophy or two that night.

The #USWNT has arrived  #ESPYS pic.twitter.com/TkYo4JfJO0

The first USWNT ESPYS award of the night went to Alex Morgan, who took home Best Female Athlete. We’d argue Megan Rapinoe was more deserving (she won the Golden Ball and Golden Boot at the Women’s World Cup), but the ESPYS are essentially a popularity contest.

Morgan gave a nice acceptance speech and thanked ESPN for its new deal to bring NWSL games to the World-Wide Leader. (In case you want to support the NWSL, take our quiz on which team to follow here.)

"Sorry, but this is probably the second-best trophy we won this week."

We see you, @alexmorgan13  pic.twitter.com/MZPo5HiD8V

Eventually, after honoring the legendary Bill Russell with the Arthur Ashe Award, the ESPYS got to the only other award people actually care about: Best Team.

You almost feel sorry for the other nominees in this category like the Raptors (but not the Patriots and Red Sox), because there was always only going to be one winner, the same as when the USWNT won the award four years ago.

When actress Sandra Bullock announced the winner, she did so only after reading the card and saying, “All those in favor of equal pay say ‘I.’”

Carli Lloyd then took the mic and made all the typical thanks while Rose Lavelle and Mal Pugh giggled to each other. Rapinoe, of course, would not be held silent for the show, but she merely said she’d refrain from dropping another F-bomb on TV.

All we do is win win win no matter what. It’s been a WEDNESDAY, y’all. pic.twitter.com/arfjF6m7kF

But let’s talk about how amazing Rapinoe’s outfit was.

Leather shorts, shiny black shoes with white socks and nothing more than a sports coat and necklaces on her chest, Rapinoe killed it with her look. She topped it off with her now-famous shock of purple hair, which differentiated her from her girlfriend Sue Bird and Tobin Heath, who had similar outfits. Heath rocking the sunglasses was a nice touch, though they were probably necessary for the week-long hangover these ladies must have from partying so hard.

To be honest, between winning the Women’s World Cup and celebrating all week, I don’t know how the players found time to shop for these amazing outfits. They probably had so much confidence in winning they had them prepared before the tournament even began.

After the show, the USWNT hung out with legends like Russell and Billie Jean King, two athletes who paved the way for the U.S. players to stand up for what they believe while also winning in their respective sports.

It has been a whirlwind week for the USWNT.

After beating the Netherlands to win the Women’s World Cup on Sunday, the team celebrated all the way to the sets of Good Morning America in New York City on Tuesday before the ticker-tape parade Wednesday. Hopefully these women get some rest now; the NWSL season hasn’t stopped and their next match is against Ireland on August 3 at the Rose Bowl.

Hope you all have been having as much fun as us because it’s been a lot. But the best kind, of course. pic.twitter.com/TKU60IAw13

There were a couple of women's soccer ESPYS that didn't actually go to the USWNT. Sam Kerr of Australia and the Chicago Red Stars won Best NWSL Player and Best International Women's Soccer Player. Zlatan Ibrahimovic won Best MLS Player while Lionel Messi was named Best International Men's Soccer Player. None of those awards, apparently, were good enough to make it onto the TV broadcast.

Aside from soccer being lumped in with baseball, there was one sad note for the USWNT on Wednesday: Julie Ertz, who was nominated for Best Play for a goal she scored against Brazil, did not win. Ertz, in fact, was the lone USWNT player not at the ESPYS.

That said, the woman who did win Best Play completely deserved it and gave a great speech after.

And in case you forgot or missed her viral routine, here’s a taste of why Katelyn Ohashi won the ESPY.

Katelyn Ohashi scored a perfect 10 for this flawless floor routine back in January.

She’s definitely got that USWNT swagger, and an ESPY to boot.