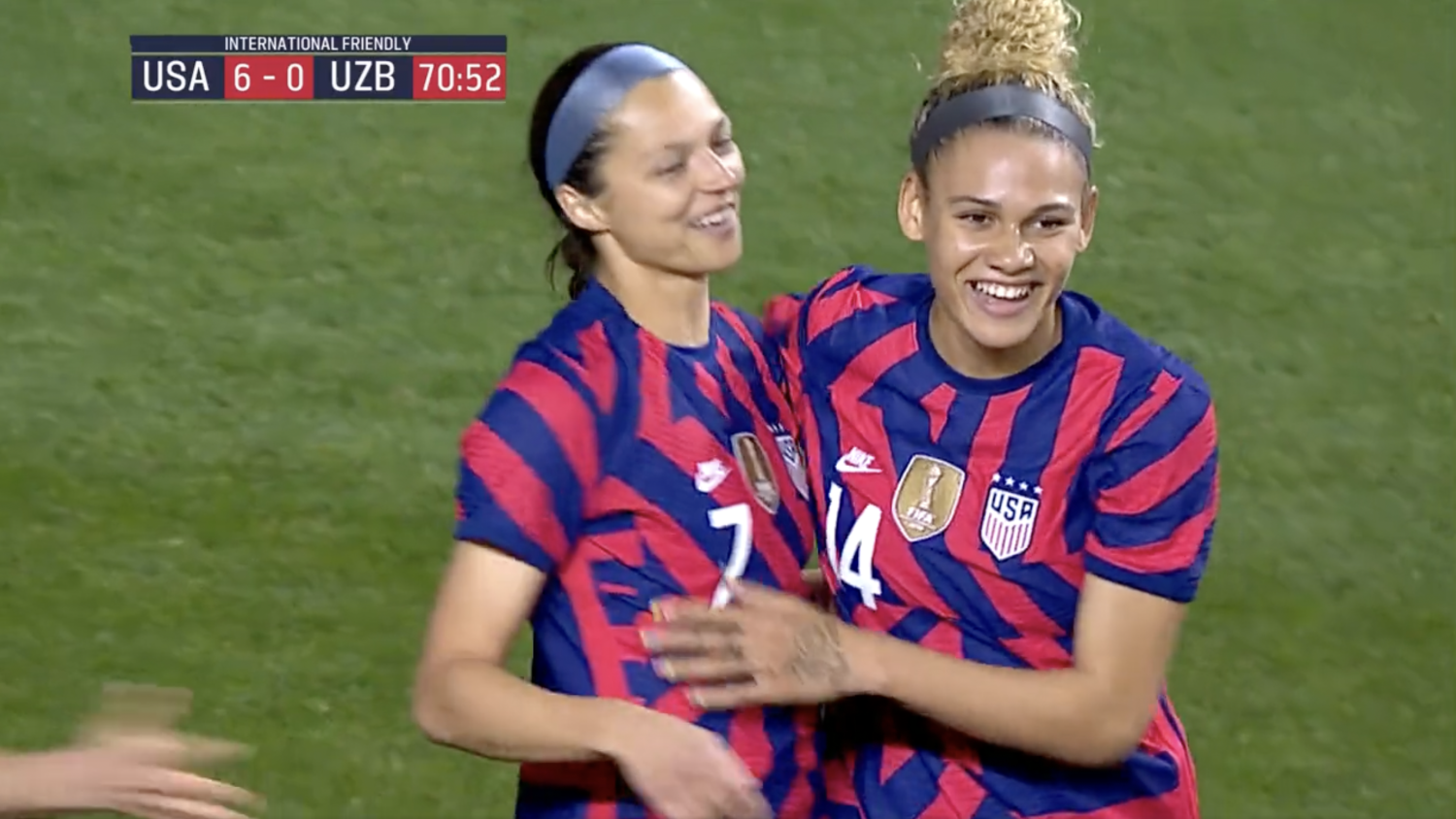 The USWNT crushed Uzbekistan for the second time in four days.
@USWNT | Twitter

Welcome to the club, Trinity Rodman.

At 19, Rodman is one of the most exciting USWNT prospects in years. She was the youngest player ever drafted into the NWSL, won Rookie of the Year and the NWSL championship in her first season with the Washington Spirit and signed the largest contract in NWSL history in February. Now, she’s a U.S. goal scorer.

Trinity Rodman scored her first USWNT goal in a 9-0 rout of Uzbekistan on Tuesday evening in the Philadelphia Union’s Subaru Park. The 48th-ranked team in the world was no match for the No. 1 team over two friendlies after the Americans won Saturday 9-1.

Catarina Macario (two), Mal Pugh, Rose Lavelle (two), Midge Purce and Ashley Sanchez also scored for the U.S., in addition to an Uzbekistan own goal just 25.1 seconds into the match. The USWNT turned on the sauce in the first half with six goals, but the first of the second was the landmark first for Rodman with the senior women’s national team.

Rodman burst onto the national scene in 2020 when she was scoring goals for the youth USWNT at the U-20 Women’s World Cup. She went to Washington State to play college ball, but because of Covid she never got a chance to take the field for the Cougars. Instead, she jumped straight to the NWSL and is already one of the league’s most exciting players. She turned down a call-up to go to Australia to play a pair of friendlies in November before accepting her first call-up for the January camp. And she’s not shy, either, having participated in a little Twitter feud with USWNT veteran Ashlyn Harris in March.

Rodman came on as a sub at halftime and immediately set to work terrorizing the left wing, but it was from the middle that the daughter of former NBA bad boy Dennis Rodman scored her first U.S. goal, the first USWNT strike from a teenager since 2018.

It was goal No. 7 of the day after a rampaging first half. Here are some of the highlights rest of the match, including a stellar Macario free kick and a cheeky chip from Lavelle. My favorite, though, was Pugh’s first and the USWNT’s third.

Sanchez in the 90th (again)! pic.twitter.com/Lu3QjZAaek

Oh, and Aubrey Kingsbury received her first cap, making all of zero saves for the clean sheet.

Next up for the USWNT is a pair of friendlies in June before the Concacaf W Championship in Mexico in July, which will serve as qualifying for the 2023 Women’s World Cup and the 2024 Olympics.