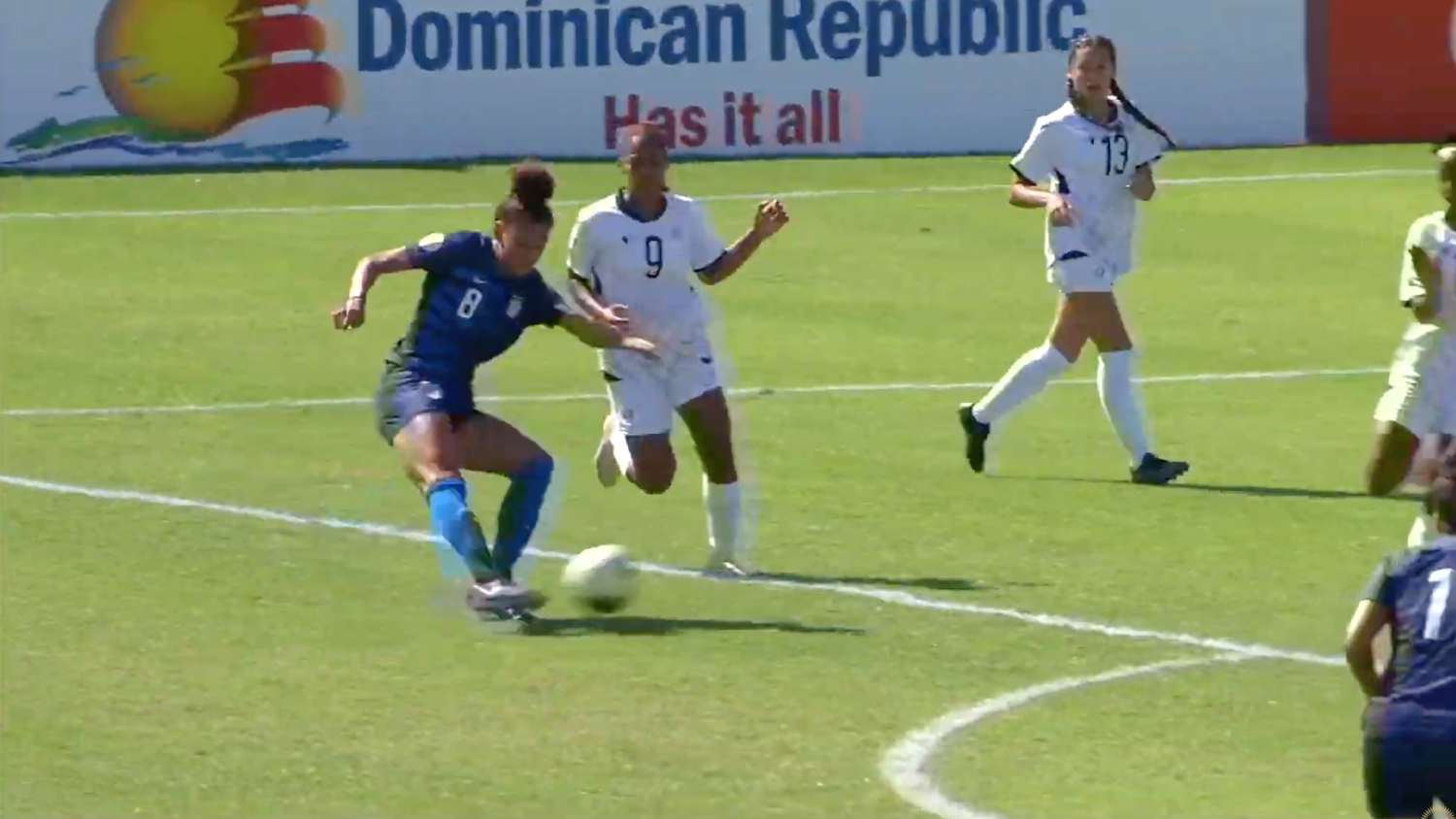 The USWNT is heading to the U-20 Women’s World Cup in August, and former NBA star Dennis Rodman is, oddly enough, part of the reason why.

The USWNT clinched its spot in the U-20 WWC with a 6-0 over the Dominican Republic in the semifinals of the Concacaf Women’s U-20 Championship on Friday in Santo Domingo, the capital of the Dominican Republic. Dennis Rodman’s daughter, Trinity Rodman, had two impressive goals and two assists to help the Americans cruise to victory.

The U.S. will play either Mexico or Haiti in the final of the Concacaf Women’s U-20 Championship on Sunday. Mexico beat the U.S. on penalties in the 2018 final of this biennial tournament.

A dominant victory over host Dominican Republic advances the USA to the U-20 @FIFAWWC! pic.twitter.com/qxvW0ISWvN

The Americans have cruised through the tournament without allowing a goal. They beat Cuba 9-0, Dominican Republic 4-0 and Honduras 11-0 in group play. Knockout play has seen the U.S. crush Saint Lucia 6-0, Canada 4-0 and on Friday the Dominican Republic for a second time. (Haiti has similarly crushed the opposition, outscoring opponents 37-0 on the way to the semifinal, which will be played later Friday.)

The two finalists of the tournament will stay close to home for the 2020 U-20 Women’s World Cup, which is being co-hosted by Costa Rica and Panama, who both qualified automatically.

On Friday, UNC’s Brianna Pinto continued her torrid form with a hat trick inside 21 minutes, all on headers. But the two best goals of the match belonged to Trinity Rodman, one of the nation’s best high schoolers.

Dennis Rodman was one of the NBA’s most unique stars in the history of the league. With his always-changing dyed hair, unique tattoos and facial piercings, he was more than just one of the game’s most dominating rebounders and defenders of all time. The five-time NBA champion, whose sisters were more successful basketball players than him at the high school and collegiate level, was known as much for his battling on the boards as for his personal life, in which he often cross-dressed, dated superstars like Madonna and Carmen Electra and became friendly with North Korean dictator Kim Jong-un.

His daughter might not have the same wild streak as her father, but she may have more skill.

Trinity Rodman was rated as the No. 1 forward in the high school class of 2020 and made a late switch from signing with powerhouse UCLA to instead play for Washington State, which made a dream run to the 2019 Women’s College Cup, the school’s first-ever final-four appearance. Part of the reason for the switch was the fact her brother, D.J. Rodman, is a forward for the Cougars’ men’s basketball team.

On Friday, Trinity Rodman was pivotal to the USWNT’s win, assisting on two goals in the opening four minutes. Rodman twice sent in visionary crosses from the right wing that found the head of Pinto for two early goals to set the mood.

Rodman turned goal scorer in the 16th minute. Posted up on the left wing this time, Rodman looked like Christen Press cutting inside and launching this golazo.

Pinto then completed her hat trick in the 21st minute off an assist from Mia Fishel as the Americans led 4-0 at halftime.

Rodman would’ve tallied another assist early in the second half, but Fishel’s first effort was saved, forcing her to score on the rebound like Rodman’s father was famous for. The goal was Fishel’s 11th of the tournament, tying a USWNT record in Concacaf World Cup qualifying.

Not long later, Rodman tallied her second goal, the best goal of the day.

Fishel cut in front the left sideline to find Rodman making a run down the middle of the field. Instead of controlling the ball to set up a shot, Rodman spun around in a pirouette, completely bamboozling her defender to set up a clear shot at goal, which she buried.

Let’s see Dennis Rodman pull that movie off. The goal was Trinity’s sixth of the tournament.

The U.S. took its foot off the gas a bit after the sixth goal, with many of the starters being given deserved rests. Sophia Smith, the No. 1 overall pick in the 2020 NWSL draft and someone who has already played with the senior USWNT, was subbed out in the 27th minute after a first-half hydration break. Pinto and Rodman were also given breathers in the second half.

USWNT fans will now have two matches to look forward to on Sunday. The U-20 team looks to complete its perfect run through World Cup qualifying while the senior squad hopes to take out Spain in the SheBelieves Cup.