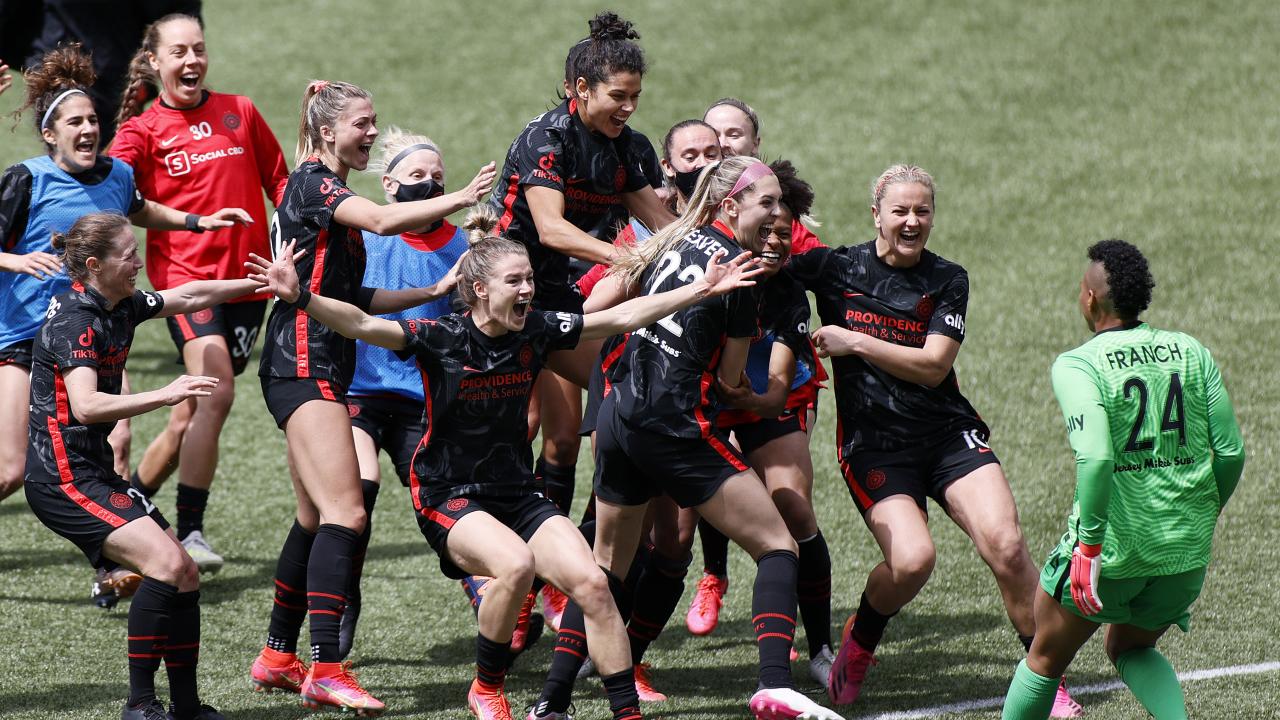 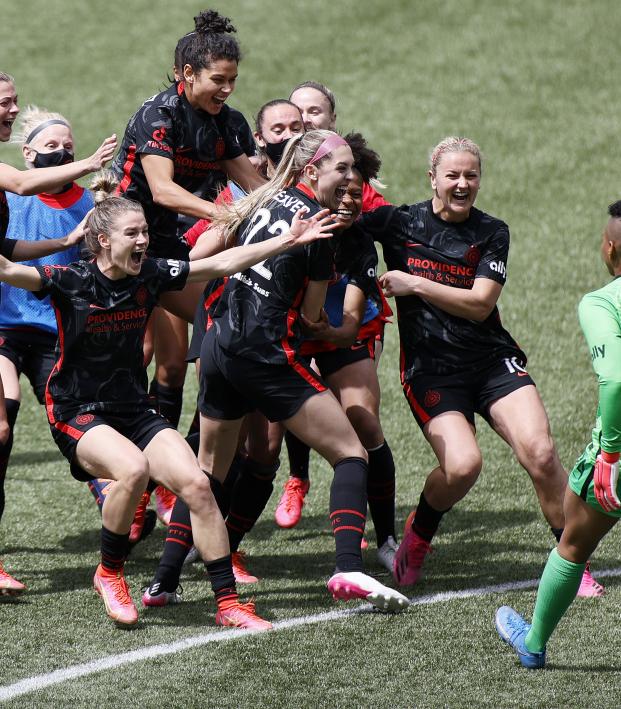 March Madness is finally here. No, not that silly basketball tournament that once again left your school out (what, just me?). I’m talking real madness: The 2022 NWSL Challenge Cup. If it’s anything like the start of last year’s edition, you won’t want to miss a minute.

While the NWSL regular-season schedule release continues to be a meme, we’ve had the Challenge Cup schedule out for a while now. The third edition of the tournament features the most intriguing setup yet.

With two new teams, numerous offseason trades and a few players leaving the NWSL to play abroad, here’s everything you need to know about the 2022 NWSL Challenge Cup, from schedule to how to watch.

With the addition of Angel City and San Diego Wave FC, the NWSL has 12 teams competing this year. With that in mind, the league split the teams up into three groups of four for the Challenge Cup.

Each team will play every team in its group home and away. The top team in each group and one second-place team advance to the semifinals.

The semifinals will be played May 4. The NWSL Challenge Cup Championship is slated for May 7.

How To Watch NWSL Challenge Cup 2022

The 2022 NWSL Challenge Cup will mostly be available on the streaming platform Paramount+, with a few matches on CBS and CBSSN.

Most matches will only be on Paramount+. The first NWSL game of the season on TV will be between expansion clubs Angel City and San Diego Wave on April 2. CBS will air that match, the second meeting between the two. CBSSN will air four matches and CBS three throughout the tournament, including one of the semifinals (CBSSN) and the final (CBS).

Other matches on TV include KC Current vs. Houston Dash, April 15 (CBSSN), OL Reign vs. Angel City, April 17 (CBSSN), N.C. Courage vs. Washington Spirit, April 23 (CBS) and Houston Dash vs. Racing Louisville, April 24 (CBSSN). Yes, I too am surprised the Dash will be on TV twice despite not having a single USWNT player on the roster other than third-string keeper Jane Campbell.

What To Watch For At 2022 NWSL Challenge Cup

The biggest news ahead of the 2022 NWSL season is the two expansion teams in California. Both have already done a great job both marketing and building their clubs.

Coached by Freya Coombe, Angel City is building around USWNT star Christen Press and traded for one of the league’s best defenders in Sarah Gorden. The club owns the rights to Julie Ertz, meaning if she decides to play this season, it’ll be with the new LA team.

In San Diego, former Manchester United manager Casey Stoney has a couple of USWNT stalwarts in Alex Morgan and Abby Dahlkemper, plus England international Jodie Taylor. With former USWNT coach Jill Ellis leading the way as president, the Wave hope to hit the ground running in 2022.

The reigning NWSL champion Washington Spirit remain one of the favorites after signing Trinity Rodman to the most expensive deal in NWSL history. The Chicago Red Stars had a fire sale after losing in the NWSL Championship game to the Washington Spirit, losing Gorden, Ertz, Nikki Stanton Katie Johnson, Makenzy Doniak and Kelsey Turnbow, not to mention coach Rory Dames, who left under damning allegations of abuse, with even more sexual abuse allegations coming to light after he left. But the club still has some big names with Mal Pugh, Kealia Watt, Alyssa Naeher, Morgan Gautrat and Tierna Davidson.

Lynn Williams and Sam Mewis traded N.C. Courage for KC Current. Partners Ashlyn Harris and Ali Krieger left Orlando for Gotham, which also added Sam Kerr’s partner Kristie Mewis. The Courage pissed everyone off by signing noted bigot Jaelene Daniels. Megan Rapinoe is back for another season with OL Reign, which is without the big-name loans the club brought in from Lyon last summer. The Orlando Pride hope for addition by subtraction under new coach Amanda Cromwell after losing Morgan, Harris and Krieger, but they’re not off to a great start after losing to Florida State in a preseason game. The Thorns are still stacked but will miss Crystal Dunn, who is pregnant. Racing Louisville added Jessica McDonald and two-time MAC Hermann Trophy winner Jaelin Howell. While the Dash still don’t have any marketable USWNT stars, they made one of the more interesting moves by signing María Sánchez from Tigres.

There will also be a few familiar faces missing this season. Lindsey Horan went on loan with Lyon through the summer of 2023. Tobin Heath remains in London with Arsenal despite rumors she’d join Press in Los Angeles. Most surprisingly, Mia Fishel, one of the USWNT’s top forward prospects, chose to sign with Tigres in Liga MX Femenil instead of joining the Pride, who drafted her fifth overall out of UCLA.

Who Are The NWSL Challenge Cup Favorites?

Whenever you’re predicting winners in the NWSL, the easy choice is Portland. Every year the Thorns put out great teams, and as the reigning Challenge Cup champs, it’s hard to pick against them repeating.

The Spirit are still one of the best teams in the league and the young core will only be better this season. I really like OL Reign’s attacking talent and Gotham looks like they’re in it to win it now.

Against all odds, I’m going to predict the Houston Dash will win the Challenge Cup — hear me out. The Dash are in the easiest group, with the other three teams either in transition or still trying to find their identities (KC and Racing finished at the bottom of the regular season table last year). Houston is also the only NWSL team that has had the same coach for the last 12 months, which is an absolutely mind-boggling fact but also a sign the league is at least starting to push out abusive coaches.

Plus, the best moment in Dash history to date was the 2020 Challenge Cup, when the team beat the odds to claim the trophy (and then fill said trophy with beer). Houston has never made the NWSL playoffs, but it always shows up for the Challenge Cup, going undefeated in the 2021 edition.

Regardless of what happens, we hope for an entertaining Challenge Cup to kick off the NWSL in 2022. With just a disappointing SheBelieves Cup to watch Stateside this year, we’re ready for the Challenge Cup to start what should be a great year for women’s soccer with World Cup/Olympic qualifying this summer.

And if we’re lucky, we’ll get a few more matches like this one.