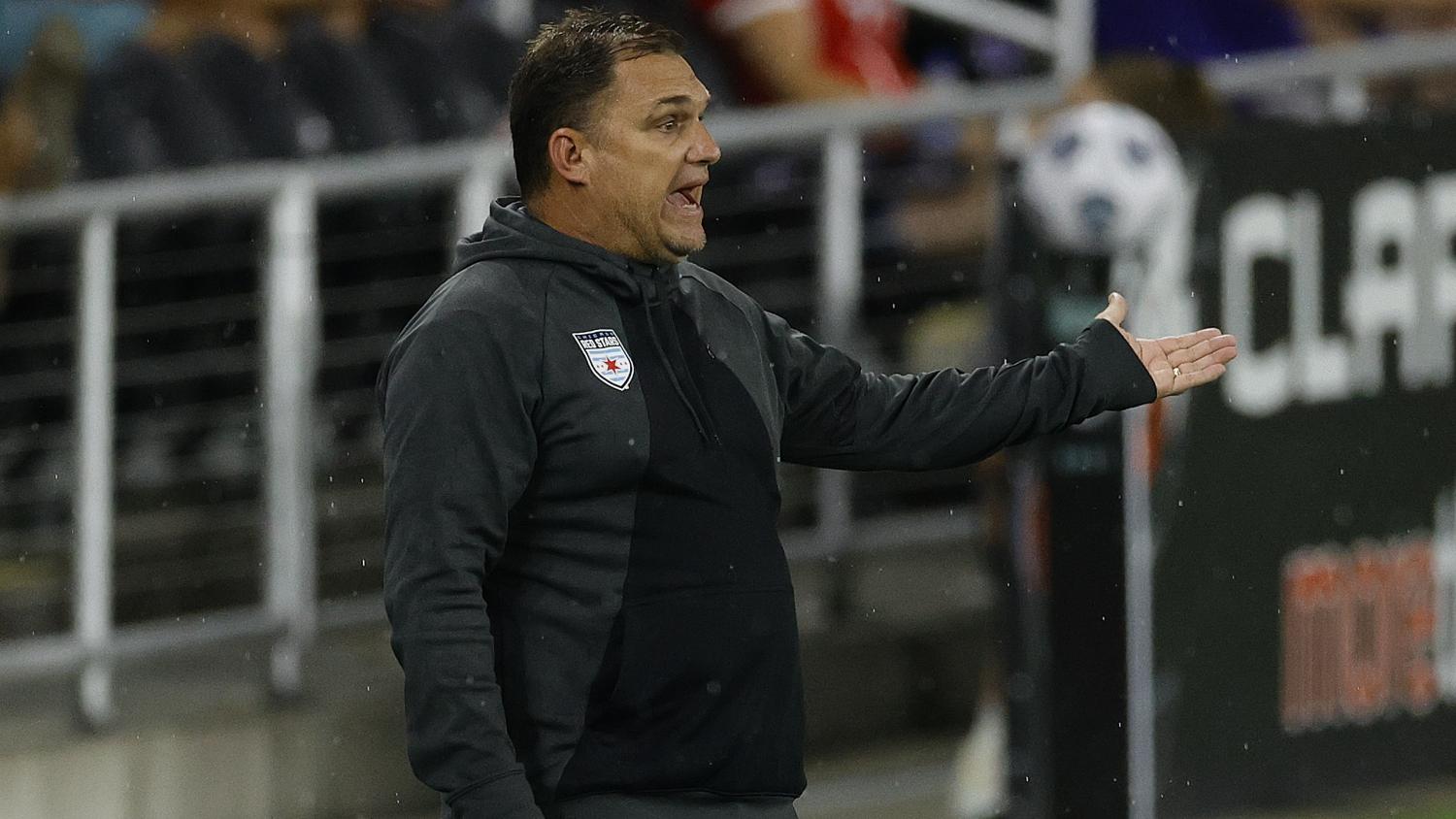 Back in November, Rory Dames tried to quietly exit the NWSL with a press release hours before a Washington Post story outlined years of his alleged abuse of players while he coached the Chicago Red Stars. The allegations came from NWSL stars like Christen Press, one of the most recognizable players in league history.

On Tuesday, Molly Hensley-Clancy wrote another story on Dames alleging decades of abuse. While the allegations came mostly from players you’ve never heard of, they’re even more damning, including sexual coercion and physical assault. The accusations highlight how systemic and prevalent abuse is in women’s soccer, from the highest levels of the sport to the youth ranks.

The Post obtained a 1998 police report where a teenager said she wanted to protect her teammates from Dames.

In 2018, Christen Press told US Soccer the same thing. Both times, Dames kept his jobs. In the decades between, he coached hundreds of players.https://t.co/q4yldlHdTd

I’ll admit, when I saw Hensley-Clancy wrote another piece about alleged sexual misconduct in women’s soccer, I initially didn’t want to read about it. There’s been so much reported abuse in the sport over the last six months, it’s hard to dig deeper into the well of empathy, much in the same way repeated mass shootings in the U.S. no longer garner the public’s attention.

It’s for that exact reason we mustn’t look away now. Kids are being abused; if nothing is done, kids will continue to be abused.

The amount of abuse — some alleged, some confirmed, others still silent — in women’s soccer that has come to light since August is staggering. NWSL head coaches Craig Harrington, Farid Benstiti, Richie Burke, Christie Holly, Paul Riley and Rory Dames have all exited the league under allegations of abuse, from verbal harassment to sexual coercion. These men, if the allegations are true, make Kurt Zouma look like a saint.

The Dames accusations first reported in November stated he controlled, berated and humiliated players. USWNT superstar Christen Press first raised concerns about Dames in 2014 and again in 2018, but each time he was allowed to continue coaching both in the NWSL and in the youth soccer ranks.

Tuesday’s Washington Post reporting shows issues with Dames reach all the way back to 1998, when a police report was filed after a youth player alleged Dames touched her inappropriately. The story also details how Dames allegedly groomed a young player to eventually have sex with him when she turned 18, while she was still playing for his club.

The Post reported 14 former youth players said Dames was verbally and emotionally abusive to them as teens, leaving many with lasting psychological damage. The alleged abuse included body shaming (fat ass, fat fuck, fat cunt), public humiliation and name calling (pussy, fucking idiot, retard). The 1998 police report showed Dames was accused of pinching girls who refused to give him a massage and punching a boy in the stomach.

Dames would berate players during practice and on the sidelines during games. It was so bad, the former player who said she was coerced into sleeping with him blamed parents for not stepping in when hearing such verbal abuse.

“Every parent — none of them knew about the sexual abuse, but every parent knew and had heard Rory be abusive at a practice or game, and they turned a blind eye to it,” the player said. “They all decided that it was OK, that it was a means to an end. People were willing to do anything to get their kids on these teams.”

I suggest reading all of Hensley-Clancy’s excellent reporting here. Dames, through a lawyer, denied the accusations.

What I’d like to highlight is how this is another example of abuse being systemic to women’s soccer in the U.S. (To be fair, this isn’t an issue only in the U.S. — just Tuesday former Canada U-20 women’s national team coach Bob Birarda pleaded guilty on three accounts of sexual assault and one count of touching a young person for a sexual purpose.) Just like when the MeToo movement swept the globe, women’s soccer is having its own similar movement. And just like the MeToo movement, the abuse is far more prevalent than is publicly known.

What’s most striking about the recent accusations against Riley (sexual coercion), Burke (verbal abuse) and Dames (a bit of both) is how all three men were prominent in youth soccer before they became NWSL coaches. The Post article details how much of Dames’ alleged abuse occurred before he even reached the professional game.

Time after time, men rise through the ranks of the U.S. youth system to become coaches of major professional teams in women’s soccer. If these men are the best of the best, what sort of coaches are currently leading youth teams now? I don’t even want to imagine. These men obtain power and then abuse it. They control everything about the clubs, including the players’ social lives and collegiate hopes.

Dames, who owned the Eclipse Select club, refused to have an assistant coach so he could micromanage everything. He demanded every college coach who wanted to recruit one of his players go through him, so he could dangle that carrot in front of players and deny them the opportunity if they disobeyed. If players wanted to succeed in the sport, they had to do whatever they could to appease him, and Dames took advantage of that.

“I will never be able to fully explain the power that (Dames) had over everybody, adults included,” former youth player Lauren Hall told the Post. “(I’ve thought) ‘Why, why did we let this happen?’ But the monopoly over Chicago soccer, our belief that his connection to the college world was the only connection we would have — he used all of that to get away with doing and saying whatever the hell he wanted to us.”

This is a story that has played out over and over again throughout elite girls soccer in the U.S., not unlike U.S. gymnastics. That’s not to say every girls soccer player in the country has an abuse story to tell, but I guarantee you it’s more common than you think.

What’s next? Former acting attorney general Sally Q. Yates is currently investigating abuse allegations in the NWSL (including Dames), which is currently both a blessing and a curse. Yates’ investigation is important and necessary, but currently U.S. Soccer and NWSL clubs are hiding behind the investigation as a reason not to comment on current abuse scandals.

The Red Stars were complicit in allowing Dames to slink out of the league in November. The press release at the time of his resignation was clearly cognizant of the coming storm and decided to play it down instead of condemning the alleged abuse. Sarah Spain, a part owner of the Red Stars, said on Twitter she was told not to speak about the story by the majority owner, Arnim Whisler, who himself has been silent on the matter.

Majority owner has apparently chosen not to. Minority owners have been told we’re not allowed to speak on it. (We have and continue to demand access to agreements we’re allegedly beholden to but haven’t been shown.)

The Yates investigation is just an investigation. The alleged abuse has already been going on for years; while shining a light on deplorable behavior is a good first step, U.S. Soccer, the NWSL and elite youth soccer clubs around the country must do more to protect the players. No one deserves to be called a “fat cunt” at the age of 12.

These days, when there’s yet another mass shooting in the U.S., Americans far too often sigh and move on — there is no more empathy left after decades of horror. Gun lobbyists prevent Congress from making any meaningful action on gun control and nothing changes until the next mass shooting and the cycle repeats.

The powers that be in soccer in the U.S. can’t allow abuse in women’s sports to be the next mass shooting. We can’t expend our empathy on one abuse scandal, grow numb by the next and refuse to engage with an ongoing issue. We’ll continue to report on each accusation because these stories need to be heard, and those who committed or allowed abuse to be committed must be held accountable.