Weston McKennie On Relegation Anxiety, Life In Germany And The USMNT’s Next Cycle 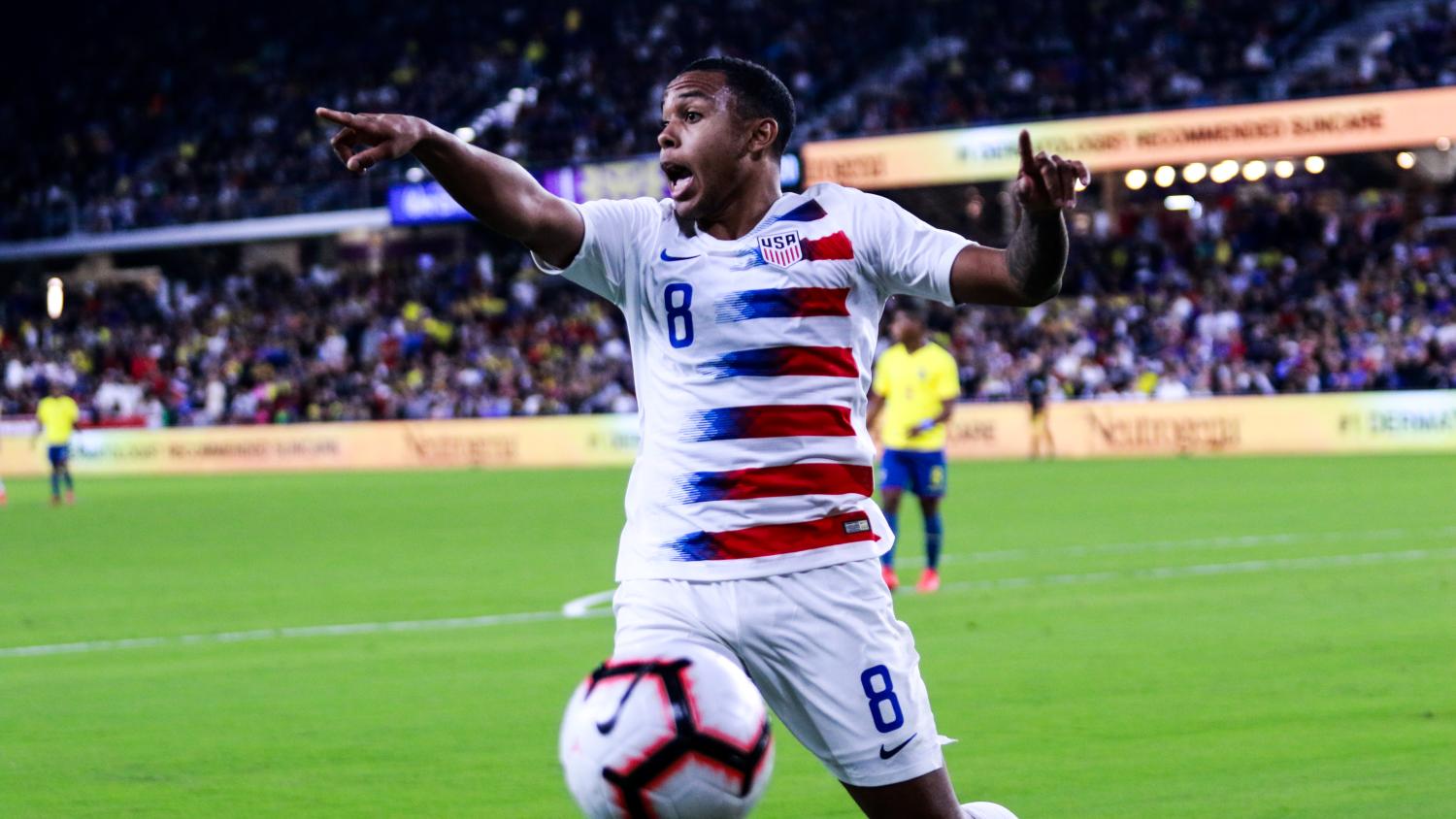 The 20-year-old Texan has experienced the highs of Champions League football and the lows of life at the bottom of the Bundesliga this campaign.
Getty Images

It’s raining sideways in Herzogenaurach on Monday evening with the temperature hovering in the low 40s. With a colossal match against Augsburg — one place above Schalke in the desperate battle to avoid the Bundesliga relegation playoff — looming the following Sunday, you could forgive Weston McKennie for being in a foul mood after traveling over 400 kilometers from Gelsenkirchen to arrive at adidas headquarters in Herzo for an evening of interviews.

But here he is, all smiles and laughter while seated comfortably in a tucked away conference room at the bottom floor of the hugely impressive adidas “HALFTIME” building, which opened last year on the company’s sprawling campus 30 miles outside Nuremberg.

Dressed in all black and with his hair cropped close to the scalp (it’s been two months of the look but we’re still processing it), the versatile midfielder is walking on air following Schalke’s remarkable 4-2 victory over Borussia Dortmund at the Westfalenstadion only two days prior. 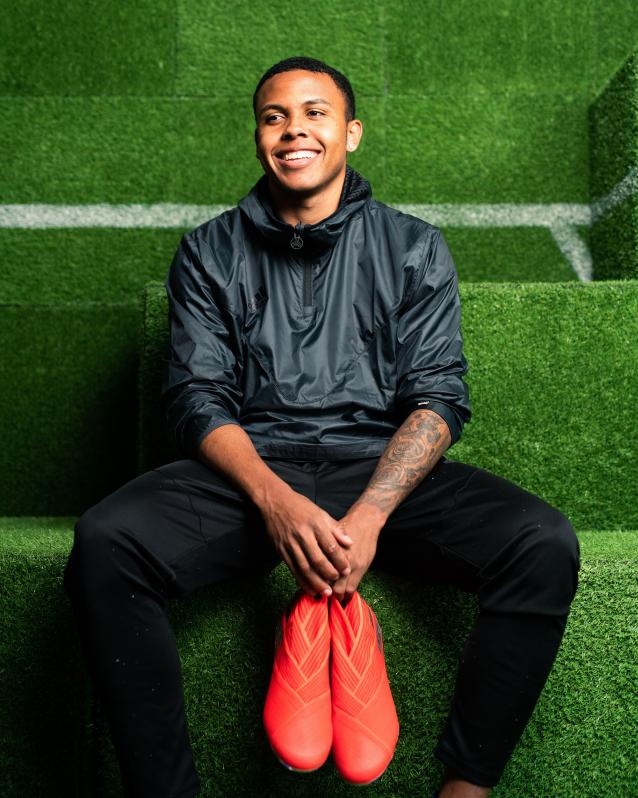 Weston McKennie with his new Nemeziz 19 boots at adidas HQ.

That victory was as damning for Dortmund’s title aspirations as it was momentous for Schalke’s Bundesliga survival. Stateside, it was billed as McKennie vs. USMNT compatriot Christian Pulisic, but McKennie — still recovering fitness after sustaining an ankle injury on international duty — was taken off in the 77th minute while Pulisic — freshly recovered from a quad complaint of his own — was brought on in the 78th.

“He said some stuff, but maybe better if we leave it off the interview,” says a laughing McKennie regarding the post match discussion shared between the pair.

But the 20-year-old Texan can’t stress enough how much the win meant for the club and its supporters, who’ve endured a rollercoaster season that’s included an appearance in the Champions League Round of 16, the firing of manager Domenico Tedesco and the current relegation battle.

“With such a traditional and big club — the chant they sing for Schalke is ‘Asoziale Schalker’ and it’s like ‘Antisocial Schalke’ — like the fans literally die for the club; they literally live through the club. With the season we’ve had this year, it’s been rough. After a game, going to the fans and getting booed and whistled and everything, it’s rough.

“The derby definitely gave them a little gift back and made them believe again that it’s possible. The fans deserved it, for sure, for being behind us this long with the season that we’ve had. You definitely feel the pressure, but it’s something that you’re always going to feel as a player and something that you’ll experience at least once in your career, ... unless you’re Messi.”

Seeing McKennie on the pitch, although he returned the previous weekend against Hoffenheim, was something of a miracle in itself. It was reported that he’d suffered a ruptured ankle ligament during the USMNT’s 1-0 friendly victory over Ecuador on March 21, an injury that many feared would not only end his season but also rule out his participation in this summer’s Gold Cup.

“I feel better, came back quicker than expected — a lot quicker than expected,” reveals McKennie. “I thought I was gonna be out for the season, but German mentality. I came back here and then got it fixed up real quick. Whenever you’re injured, it’s like: ‘I’m not doing anything to help my team. I’m not doing what I love to do.’ I came to Germany to follow my dream to play soccer. Whenever I’m not doing that or I can’t do that, it sucks. To be fair, it sucks.”

Not that McKennie is without his hobbies off the pitch.

Somewhat surprisingly, the American has no interest in watching sports, including soccer. That’s the way he’s always been. You’re more likely to find him watching the Food Network, and he’s quick to admit a longing for absent eateries like Whataburger, Chick-fil-A and quality Mexican grub.

“In Frankfurt there’s a Chipotle,” he says. “That’s two-and-a-half hours away. I’ve made that drive. I’ve made it before.”

There’s also his girlfriend and the family of dogs they’re raising together — Weston has an American akita, she’s got a minuscule Pomeranian Shih Tzu and there are immediate plans to add a husky to the mix.

On the pitch, it’s been a remarkable year to watch from afar. It’s included his first goals in the Champions League (a hugely important match-winner against Lokomotiv Moscow) and Bundesliga, but it’s also included starts at center back, right back, defensive mid, center mid, the right wing, attacking mid and forward.

His second of the game gives Schalke a 2-1 lead after fantastic work from McKennie, who gets the assist. #S04WOB pic.twitter.com/WMYG29kAT4

“My previous coach, Tedesco, he said he’s putting me in different positions so I know how to play these if I’m ever asked for it,” explains McKennie. “I guess one of the qualities of mine that always works in any position on the field is that I give 100 percent. I work hard in whatever position you put me in. I think that’s a quality you can’t teach. It’s a quality you either have or you don’t.

“It’s the mentality of it. Obviously it was different playing center back sometimes, playing right back and then playing forward in the derby we played in the first half of the season. I was playing forward and it was like, ‘Oh God, I’m really playing forward right now against Dortmund?’ Definitely not somewhere I feel most comfortable, but whatever I can do to help my team.”

For the USMNT, it appears as though his role, as defined by manager Gregg Berhalter, is a little more clear cut.

“The position that we’ve talked about me playing is what fits me the best,” says McKennie. “Playing a 10 role offensively and then defensively almost playing like a double six. As you see, I’m a player that you can’t really keep in one spot. I don’t like being just in one spot. Even if it’s defensive…” he says the last word with an inflection, laughing and making a side joke that he’s turning German, “even if it’s defensive work, I like to go back and help my teammates out, but if it’s offensive, I like to try and score — who doesn’t like scoring goals? So that box-to-box kinda role is where he sees me at and where I see myself also as most valuable at.”

He’s only got eight caps to his name at this point — his debut included a goal against Portugal — but McKennie is already something of an idol amongst this young, retooled American side. He’s been cited as an inspiration for the wave of Americans making their way to Germany of late.

“Honestly it makes me feel good, but it also humbles me because I was that kid that also looked at Christian and people that came over before me and those people were big inspirations for me. So I know how it feels to look at someone and say ‘what he did is something I want to do.’

“I know Chris Richards (at Bayern Munich) — I know him personally because we have the same agency and same agent — and you would think that these kids that are coming over now would be like, ‘I’m coming over and I’m making my own name’ and stuff, but they’re actually real humble about it. They ask you for advice. Since you’ve been through it, they ask you how to get through this or handle this type of situation, especially being over here without family or anything.”

With this being the first cycle that this group of players has experienced together at the senior level, McKennie can’t hide his smile when discussing the future prospects of this talented group.

“I’m excited, especially knowing that the opportunity is big for us to win the Gold Cup, that makes it even more exciting. I think it’ll be fun; it’ll be interesting. It’s our first real competition with this cycle and these new guys coming in. It’s our first experience playing for something, and I’m excited for it.”