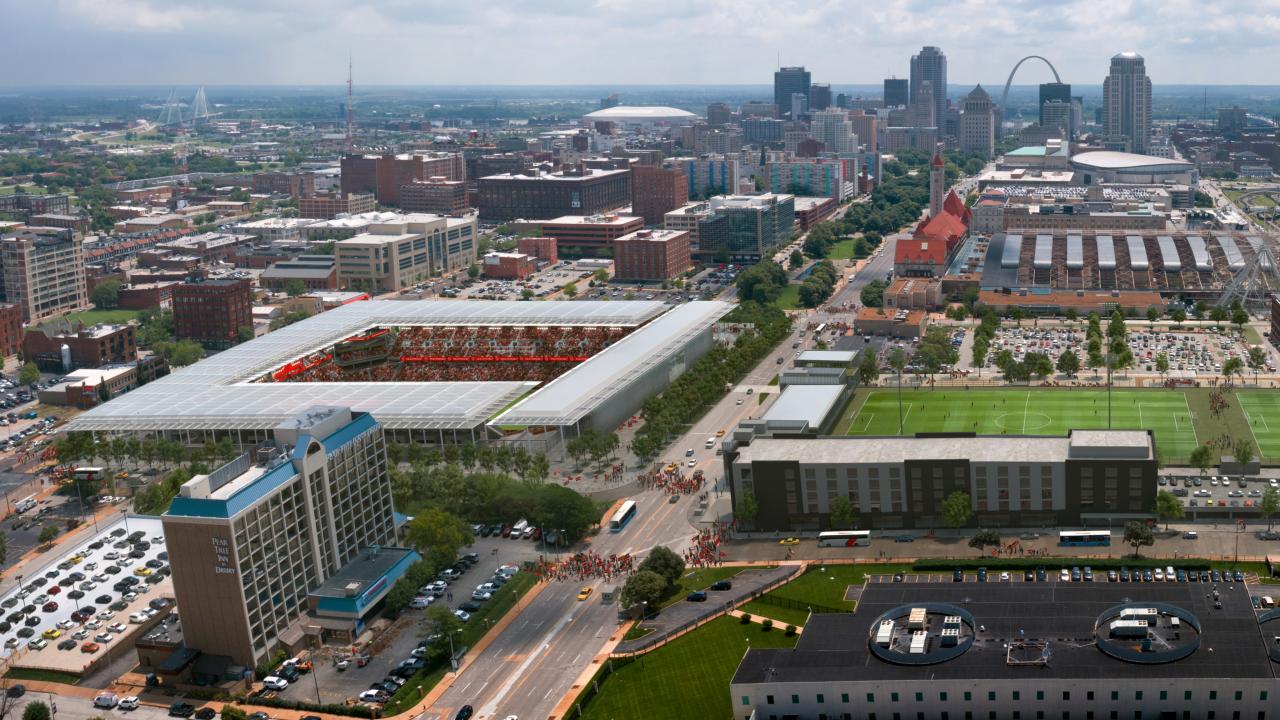 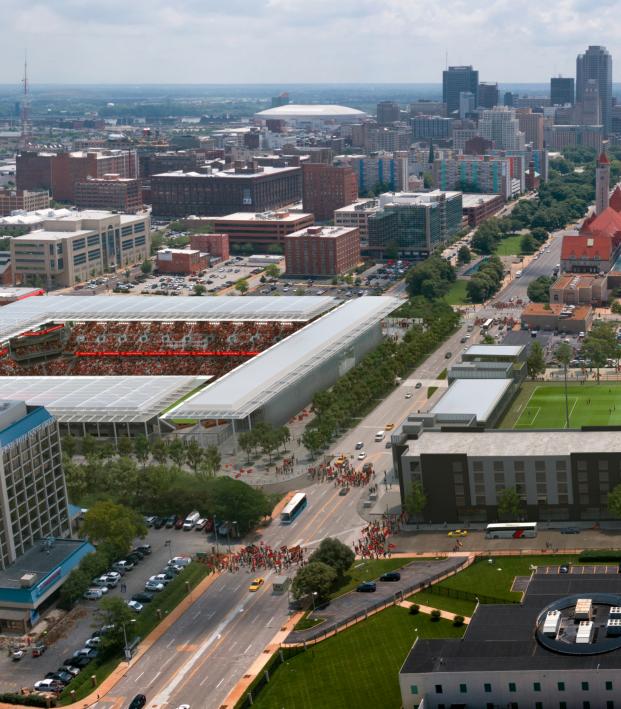 Sure STL’s Stadium Plan Looks Sweet, But Here’s What Makes It Really Special

There’s nothing hotter in MLS right now than revealing plans and renderings for a new stadium. All the cool kids are doing it these days, unless you’re the Chicago Fire and you’re unveiling a return to a really old stadium (still better than the old digs). But there’s something about the St. Louis MLS stadium that makes it special.

New MLS stadiums are being built (or planned to be built) in Columbus, Cincinnati, Miami, Austin, Nashville and, possibly, Sacramento. They join a league full of great venues, with only a few duds remaining (we’re looking at you, Revs and NYCFC).

Understandably, it can be hard to stand out in the flood of new venues, but the new St. Louis MLS stadium made us turn our heads.

St. Louis, one of the country’s best sports towns, was announced as the 28th (first majority female-owned) MLS franchise in August, set to debut in the 2022 season. This week the club — which still doesn’t have an official name — unveiled plans for a proposed stadium in the Downtown West district.

But this isn’t just a stadium reveal, this is a district reveal, and it looks marvelous.

The 22,500-seat stadium is just part of a proposal that also includes the improve of underdeveloped areas, with eyes on creating an “urban activity hub” in downtown St. Louis.

“Our vision is to create a district around our proposed MLS stadium that will get people excited to visit Downtown West, not only before and after games, but on non-game days as well,” co-owner Carolyn Kindle Betz said in a release. “We believe this district will not only be the heart of St. Louis soccer, but a special piece of downtown that will fuel the renaissance currently underway.”

Here are some of the reasons why the St. Louis MLS stadium will be special:

(My personal favorite part of the stadium is the fact donuts were shown in the reveal video, but that may just be because I live in Boulder, Colorado, where it’s impossible to find a good donut.)

Many of the features that will make the St. Louis MLS stadium attractive have been seen before (or will be seen soon in the aforementioned upcoming venues currently being built) in MLS but combines them all into one great package. It’s part of a trend toward urban stadiums as the league’s fan demographics have fully shifted away from the suburbs.

Places like FC Dallas’ Toyota Stadium all the way out in Frisco (and, insanely, with no real shade of any kind) are, fortunately, becoming a thing of the past.

Excited to finally be able to share our vision for a  stadium district that everyone can enjoy! Can’t wait for 2022! #STLMade #MLS4THELOU pic.twitter.com/ZWqneeoOqn

“We are very excited the ownership group is moving forward with its plan to own both the stadium and the practice facilities for the city of St. Louis’ new MLS team,” St. Louis mayor Lyda Krewson said in a release. “I’m encouraged by what I’ve seen of the plans so far and am very much looking forward to spring 2022. People from all over St. Louis will benefit from this new addition to our city and this new soccer team that will represent the best of St. Louis.”

The as-of-yet-unnamed St. Louis MLS stadium is scheduled to be completed in time for the 2022 season, when the club will begin play in MLS.

“Since awarding Major League Soccer’s 28th team to St. Louis in August, it is obvious the MLS4TheLou Ownership Group has been working hard to create a world-class stadium along with adjacent training fields and team headquarters in a single downtown location, which is unprecedented for MLS,” MLS commissioner Don Garber said in a release. “While there is work to be completed, we commend all who have been engaged in this process and we believe this comprehensive stadium plan will not only deliver great benefits to St. Louisans for years to come, but also serve as a model for future professional sports teams in the U.S.”