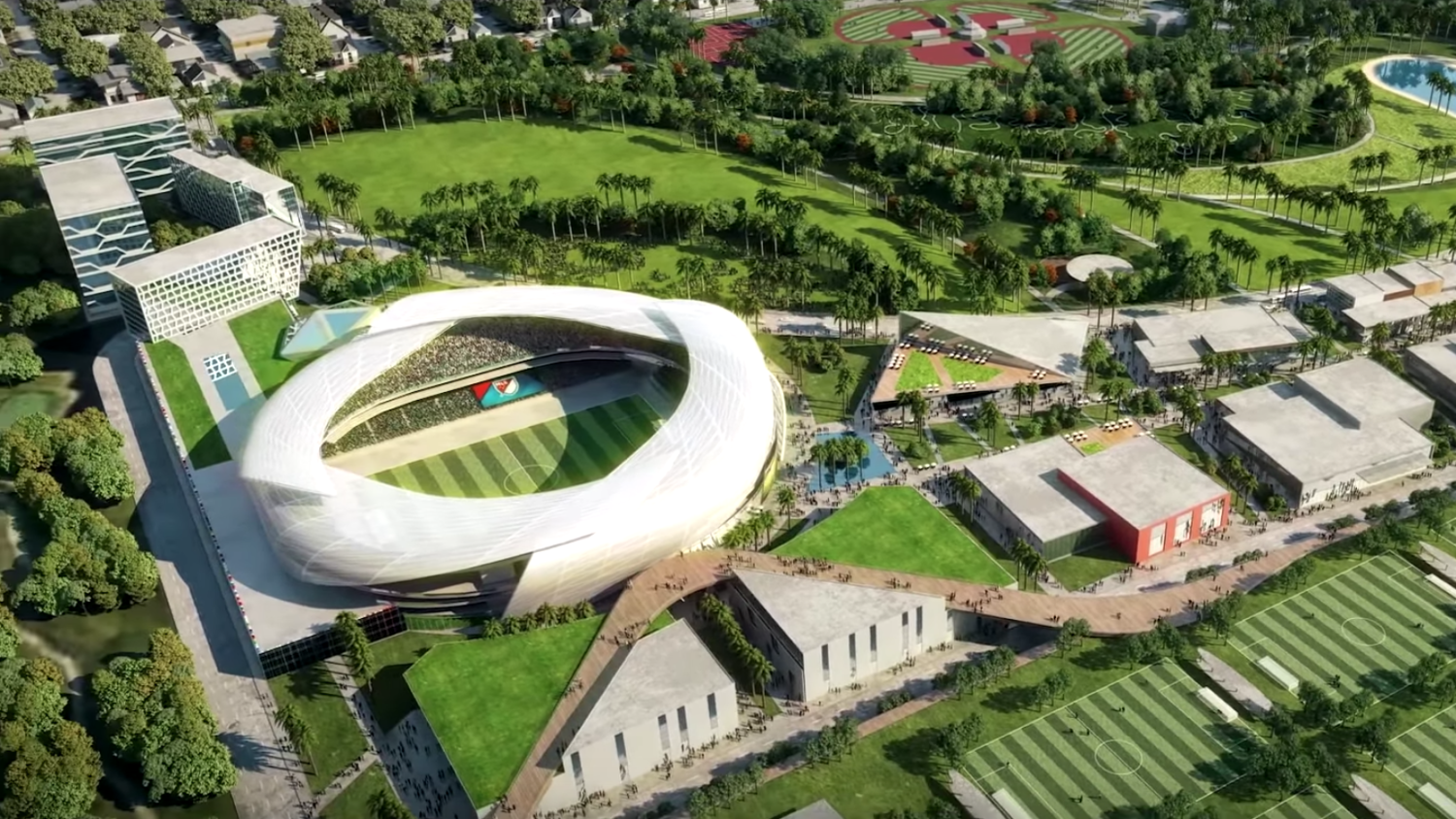 After years of nothing but rumors, Inter Miami is a reality and will now have two homes.
Club Internaćional De Fútbol | YouTube

The long march toward the existence of Inter Miami CF technically began over a decade ago. David Beckham arrived in MLS in 2007 to much fanfare, a new designated player rule, a massive contract — and an option to be an expansion franchise for $25 million after he retired. That last piece went from interesting expansion topic to reality in late 2013 when Beckham and Simon Fuller came forward as owners for a new team based in Miami-Dade County.

It's nearly six years later. Six years of delays, hunting for a stadium site, additional investors and questions as to if the club would ever come to fruition. It took until early 2018 for the newly supplemented ownership group to finally gain enough traction to confirm its inclusion in MLS.

While it took a while, the club certainly nailed it with the club colors and crest: Art Deco style to match the city and a black/pink/white color combo that fits well with Miami's culture — and should make for some great kits in the years ahead. Inter Miami CF was born with a kick date in MLS set for 2020. Now it just needed a home.

On Thursday, Miami City Commissioners approved a resolution calling for a proposed Miami Freedom Park lease to be presented by mid-September, potentially putting pressure on the discussions. #sportsbiz https://t.co/IfbK2SPmal pic.twitter.com/FG3EScAXcU

Finding a space to build not only a soccer-specific stadium but the adjacent parks, retail space and a hotel is no easy feat in a major U.S. city. Just look at NYCFC still struggling to figure out where it can put just a stadium in the New York area. Inter Miami was looking for more than 100 acres of land for its project.

The team will start play in a temporary home — more on that in a moment — while its final destination is being built near the Miami International Airport. Set to open in 2021, the group won a public vote that approved what will be known as Miami Freedom Park.

In what will be Miami's greenest and largest public parks, the soccer stadium will be surrounded by a water park, soccer fields for public use and will be accessible via public transit.

Enjoy this hype video they used during the campaign. The actual stadium rendering portion begins around 1:28. The yet to-be-named stadium will seat 25,000.

But where would the team play in the meantime? That's where this week's drama comes into play.

The Beckham United ownership group revealed plans for an 18,000-seat stadium built on the old Lockhart Stadium ground where the Fort Lauderdale Strikers once played. The facility would host MLS matches at the onset and eventually become the home for a future USL affiliate, plus serve as a training ground for the organization's academy.

A competing bid from FXE Futbol wanted to renovate the old stadium and start its own USL franchise on site.

On Tuesday night the city council unanimously voted in favor of the MLS team's pitch. While both bids had space for retail and entertainment, the FXE Futbol group was planning to charge fees to use its parks, had contingent funding options and would be using a modified ground. Beckham's group already has the funding secured, would offer more services to the public and create a brand new stadium for the area. It was a simple choice.

It may have taken an extremely long time to come together and the final product is still two-and-a-half years away, not to mention the whole sign players and form a team part, but South Florida soccer fans look in for a treat with these two new stadiums going up, new MLS and USL teams and the related academy system ready to discover talent in a soccer-rich community.