The NWSL Viewership Record Wasn’t Just Broken, It Was Obliterated

Professional team sports returned to the U.S. on Saturday with the start of the NWSL Challenge Cup. America was watching, if the latest NWSL viewership numbers are anything to go by.

The N.C. Courage beat the Portland Thorns 2-1 in the first major professional team sporting event since the novel coronavirus pandemic shut down the country. The match itself was spectacular, as was the pregame showing of solidarity with the Black Lives Matter movement.

The first match of the NWSL Challenge Cup — the tournament played in a bubble in Utah that will attempt to safely replace the NWSL season — was broadcast nationally by CBS. It was the first soccer game on CBS since the 1974 World Cup and the first under a new deal signed in March between the NWSL and CBS to bring the league to a wider audience.

That wider audience was found, with the league shattering the NWSL viewership record on Saturday.

A record-setting first match at the #NWSLChallengeCup  https://t.co/kfwA2qWZxW

The NWSL viewership record wasn’t just broken on Saturday, it was obliterated. The previous record was 190,000 viewers for a Portland-Houston match back in 2014. That marks an absurd 201 percent increase in viewership.

For a bit of comparison, the 572K viewers is more than 100,000 higher than the average Premier League match in the U.S. last year (457,000). The NWSL return had more than 60,000 more viewers for the Manchester City-Chelsea match that clinched Liverpool’s first league title in 30 years on Thursday. It’s amazing what happens when major networks pay attention to women’s sports. 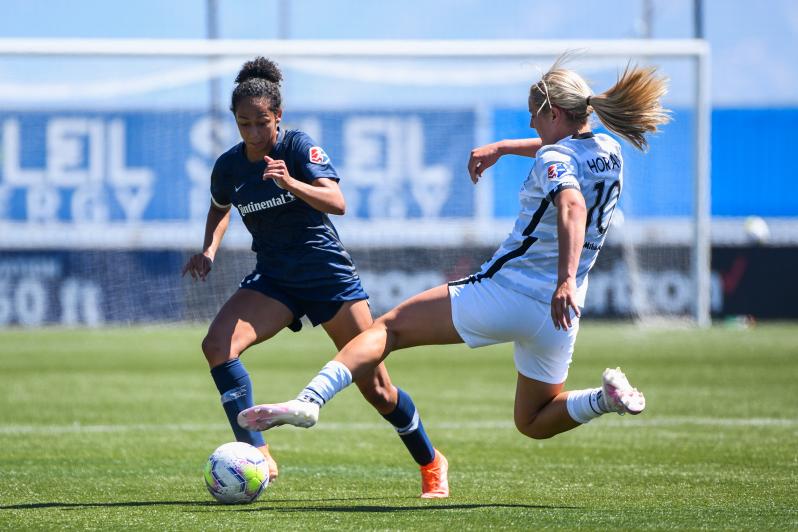 As great as this news is, one can’t help but feel like this is a lost opportunity for the NWSL. The Saturday morning match amassed huge viewership, but the Saturday evening match between Chicago and Washington was put behind a pay wall on CBS All Access, severely limiting the viewership (numbers haven’t been released for that match).

The remainder of the NWSL Challenge Cup until the final will be broadcast on CBS All Access, which costs $5.99 for a month’s subscription. While we’d argue that’s worth it, it will keep a huge portion of viewers from tuning in, either because they can’t afford it, don’t want to pay for it or simply can’t figure out what CBS All Access is.

On Tuesday, the NWSL Challenge Cup continued with an enthralling match between Houston and Utah, which ended in a dramatic 3-3 draw, a match that started at 12:30 p.m. ET. The NWSL viewership numbers for that match won’t be in for a couple days, but we can guarantee that every match not on CBS (or even CBS Sports Network) is a giant missed opportunity for a league that deserves to be on national TV every week, not a couple times a year.

A heart-racing contest between @HoustonDash and @UtahRoyals kicked off today's #NWSLChallengeCup games.

Catch up on all the goals, and there were a lot of them, in our @Verizon match highlights. #HOUvUTA pic.twitter.com/SAj7pFwW3K