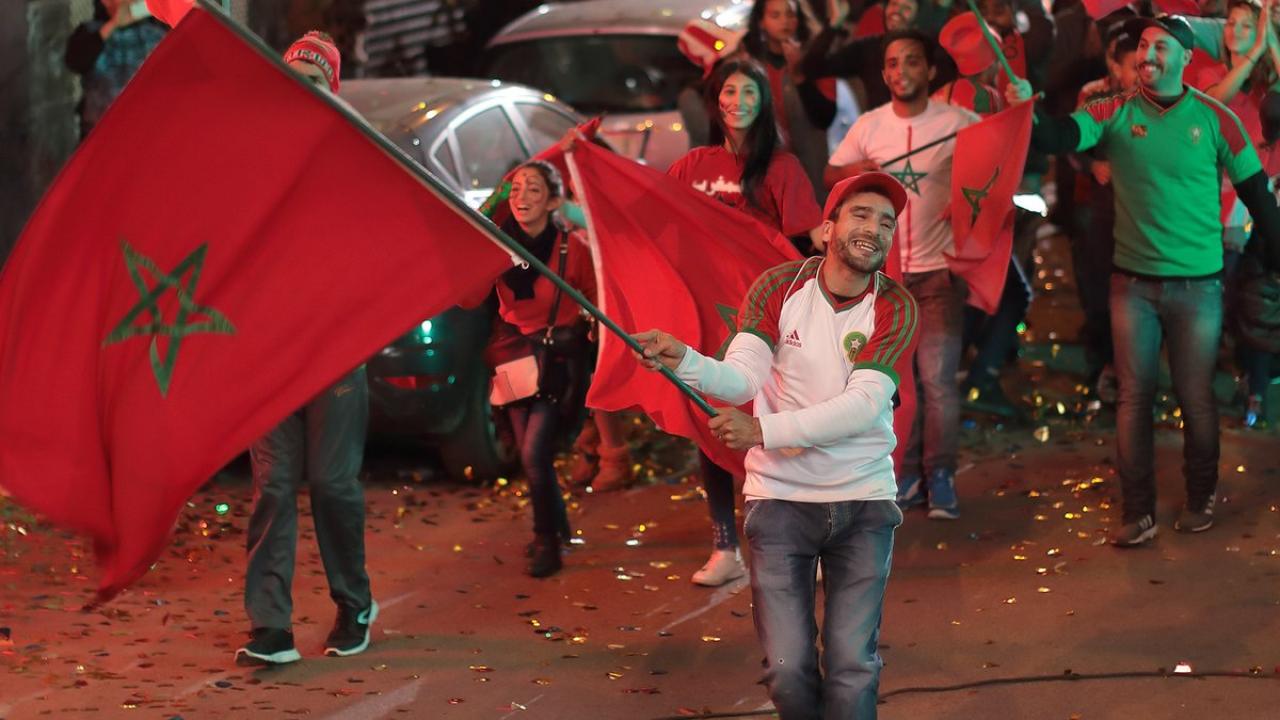 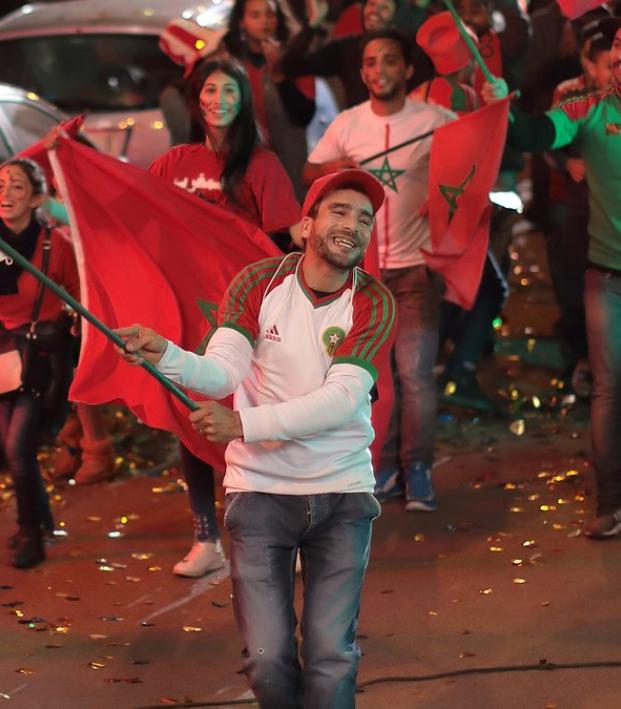 The biggest battle in the soccer world this summer — at least from a U.S. perspective — will take place before a ball is kicked at the 2018 World Cup in Russia. Prior to the start of the world’s greatest tournament, FIFA will determine the host of the 2026 edition. And the only thing standing in the way of the U.S. (along with Mexico and Canada) winning the vote is the Morocco World Cup bid.

Delegates from more than 200 FIFA nations will vote on who hosts the 2026 World Cup this June. The tournament will be the first to include the boost to 48 teams and will place greater demands on the host nation(s) than ever before. The U.S., Mexico and Canada put forth a united bid that will see the U.S. host all but 20 matches (10 each for its neighbors). The Morocco World Cup bid, meanwhile, features just the African nation.

One would expect the U.S bid to be the heavy favorite — huge stadiums are already built and other infrastructure improvements are mostly unnecessary. But because this is FIFA, who the hell knows?

Therefore, it’s important to take a look at Morocco, its World Cup bid and what the country has to offer. Having personally visited Morocco in 2017, here is a rundown on the Morocco World Cup bid.

What You Need To Know About The Morocco World Cup Bid

Morocco is located in North Africa just south of Spain. The capital of Rabat is closer to the home of Cristiano Ronaldo (Madeira) than Lisbon. Morocco has a population of about 35 million. This puts it just behind Canada as the 39th most populous nation despite being four percent of the geographic size of Canada, the world’s second-largest nation by area. (Morocco jumps from 57th to 40th in the world in total area if you include disputed territories and the Moroccan-administered parts of the Western Sahara.)

Morocco is made up almost entirely of Arab-Berbers who are themselves almost entirely Muslim. Berbers are an ethnic group indigenous to North Africa and their flag is really cool. 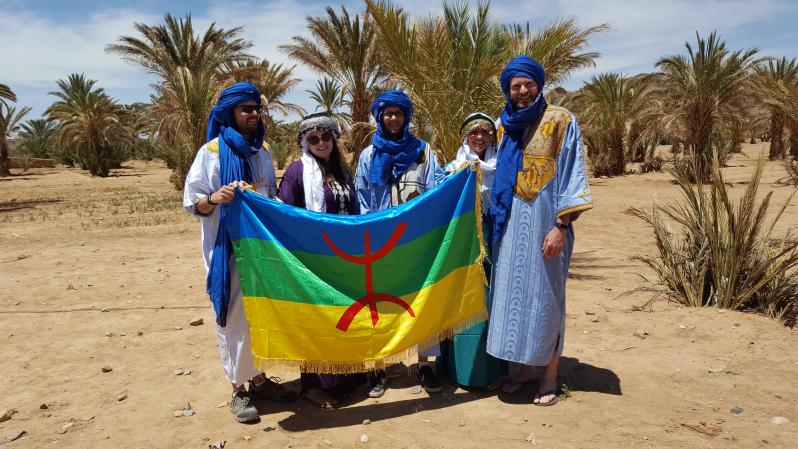 Yours truly, waving a Berber flag in Morocco. Photo By Aziz, who would love to see a Morocco World Cup in 2026.

Morocco gained independence from its French protectorate in 1956 and now has a constitutional monarchy, wherein the king has more power than that of the queen of England.

Arabic and Berber are official languages and there is still plenty of French spoken, plus some Spanish given its proximity to Spain. As in the rest of the world, English speakers can be found in the tourist areas. The currency is the Moroccan dirham, which has the great acronym MAD, because who doesn’t love a little mad money?

In addition to Rabat, major cities include Casablanca, Marrakesh and Tangier. Casablanca is the largest city in the country.

The climate is diverse, including lush forests in the north, mountains in the middle and the Saharan Desert in the south. It is the top tourist destination in Africa, with tourism representing 11.4 percent of Morocco’s GDP. I was one of 11.3 million tourists to visit the country in 2017, a number higher than the last two World Cup hosts Brazil (6.5 million) and South Africa (10 million).

Morocco is bidding for the World Cup for a fifth time after unsuccessful attempts in 1994, 1998, 2006 and 2010. Morocco would become the second African nation (after South Africa 2010) and second Muslim nation (after Qatar 2022) to host the World Cup.

The bid includes 14 stadiums in 12 cities, 10 of which have their own airports. That two of the cities don’t have airports is a bit concerning. Highways are the primary mode of transportation between host cities, though Morocco will expand its high-speed rail network for the World Cup. Morocco currently boasts the most developed motorway network in Africa, according to its bid book. One advantage Morocco has is a more compact geography, meaning travel between host cities is much shorter than in North America.

Moroccan businessman Moulay Hafid Elalamy is the chairman of the bid committee. He is also a politician and currently serves as the Minister of Industry, Trade & New Technologies in Morocco. So I’m sure he’s got plenty of spare time for the World Cup bid. Interestingly, he went to university in Quebec, Canada, now a rival for the World Cup.

As mentioned anove, 14 stadiums have been put forth, most of which have yet to be built.

Five stadiums already exist, though they will undergo modernization updates. Three stadiums were already planned but will receive accelerated timelines to be built. Six will be completely new, including one in Ouarzazate, a city of less than 200,000.

Morocco plans to build these new stadiums using the “Legacy Modular System,” which is designed to allow the stadiums to be built cheaply and then amended after the tournament to smaller, more manageable sizes.

The flagship stadium will be the Grand Stade de Casablanca, an already planned stadium that will hold 93,000. All stadiums will have at least 45,400 seats, though many will be downgraded to around 20,000 after the World Cup.

Morocco also claims that the carbon impact from stadium and infrastructure upgrades will be smaller than that of the 2014 tournament in Brazil, despite hosting 16 more teams.

What Would A Moroccan World Cup Cost The Country?

Unlike the North American bid, Morocco does not currently have the stadiums and infrastructure in place to host the World Cup. Instead the tournament will cost an estimated $16 billion for venues and infrastructure. That’s a huge amount, more than Russia spent on the 2018 World Cup.

This $16 billion includes $3 billion to build nine new stadiums and refurbish five others, plus money to build or renovate 130 training grounds both for participating clubs and local teams. The $3 billion is part of $12.6 billion in public funds from Morocco that will upgrade hospitals and transportation. Another $3.2 billion will be required from the private sector to build hotels with 30,000 rooms required. The AirBnB I stayed at in Marrakesh was lovely, so more of that, please. 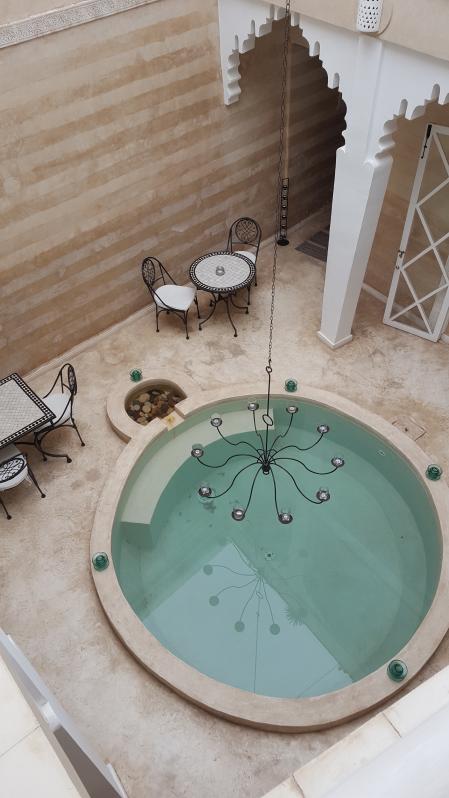 An AirBNB in Marrakesh. Photo: Travis Yoesting | The18

Air pollution is low in Morocco and the bid book claims there will be high-quality drinking water available in all host cities, so that won’t be a worry.

Unlike many African nations, no vaccines or shots are required to enter the country, though a TDAP booster can’t help. However, there was an Ebola outbreak in West Africa that caused Morocco to pull out of hosting the 2015 Africa Cup of Nations and be disqualified from the tournament. Morocco was not at the center of the outbreak but feared its spread in Morocco if it hosted.

Moroccan cuisine is diverse given its geography and political history, with influences from Arabic, Berber, Spanish and Mediterranean dishes.

Couscous made from wheat is the most popular dish. It is often combined with beef and vegetables in a tagine, an earthenware pot that’s essentially a slow cooker. It’s delicious. 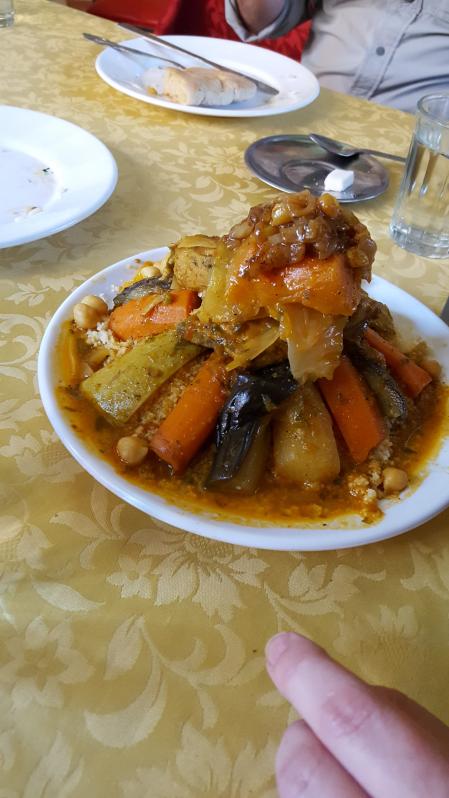 Given its proximity to the coast, Morocco has plenty of seafood. 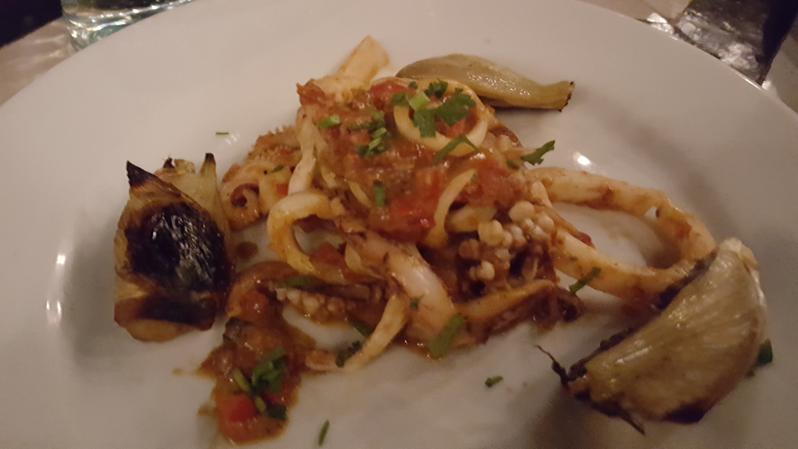 Calamari in Marrakesh that may or may not have given the photographer severe food poisoning. Photo: Travis Yoesting | The18

Despite being a Muslim nation, there are Moroccan beers and wines. Three of the more popular beers include Spéciale Flag, a pilsner, Stork, a light lager, and Casablanca, a lager, which is one of the few Moroccan beers that is exported. Imported beers are also available and if Morocco hosts the World Cup, there will be plenty of Budweiser available, for better or worse. 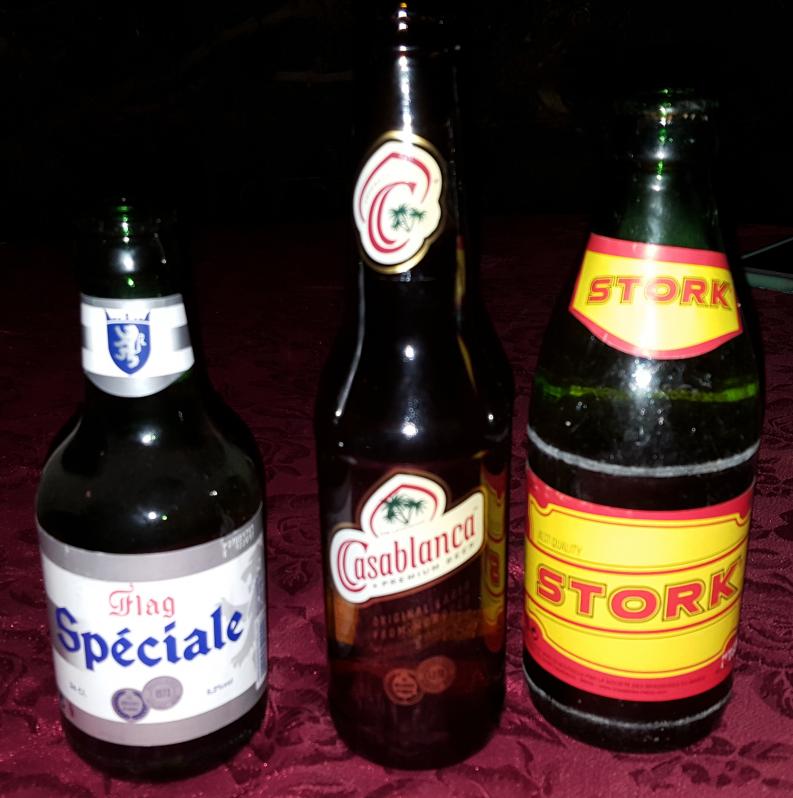 What Other Advantages Does Morocco Have?

Being in a time zone that matches up favorably with European nations, Morocco’s World Cup would allow most of the world to watch without too much time difference. According to the bid book, an estimated 60 percent of participating countries would be within a three-hour time difference, allowing for more eyes on the Cup.

Similarly, Morocco is closer geographically to more participating nations. Most of Europe can reach Morocco in about three or four hours by air. The northern tip of the country is about a stone’s throw from Gibraltar and Spain actually controls territories on the northern coast of Morocco.

Another advantage would be allowing the World Cup to be hosted by a country with a different culture than many football fans are accustomed to; people learning about other cultures only furthers bonds among peoples. While this fact isn’t overtly mentioned in Morocco’s bid book, in an increasingly divisive geopolitical climate, it would help for the world to understand that we’re all humans and shouldn’t bicker over BS like immigration and religion.

A number of English-language films have been shot in part in Morocco, including: Lawrence of Arabia, Gladiator, The Mummy, Black Hawk Down, The Mummy Returns, Alexander, Kingdom of Heaven, The Hills Have Eyes, Inception, Sex and the City 2, Captain Phillips and American Sniper, plus Game of Thrones seasons one and two. 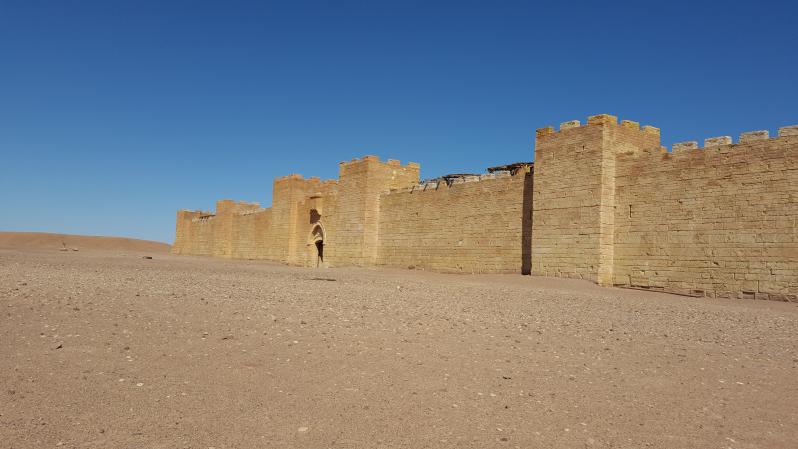 Part of the movie "Gladiator" was filmed in Morocco. Photo: Travis Yoesting | The18

The 1942 classic film “Casablanca” was not shot in Morocco.

Plus, there are tons of cats. And who doesn’t love a nice stray kitty? 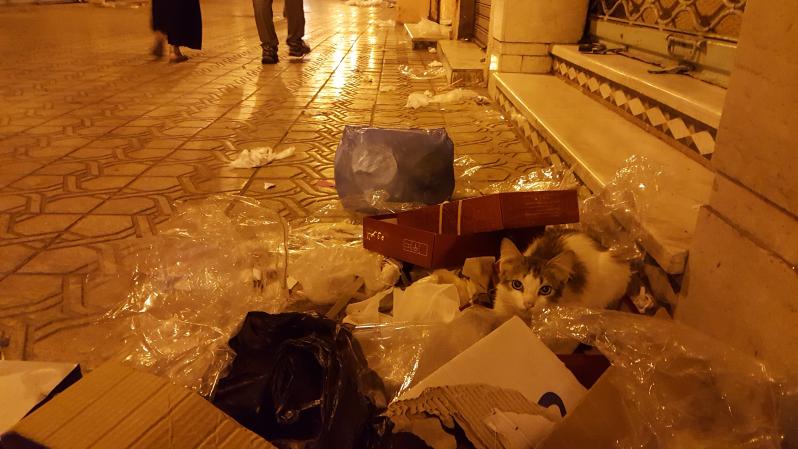 Marrakesh is home to thousands of lovely stray cats like this fellow. Photo: Travis Yoesting | The18

What Disadvantages Does Morocco Have?

The major disadvantage is the incredible cost of the World Cup, as mentioned above. The united bid has stadiums in place; Morocco does not. Plus, the last time the World Cup was held in the U.S., attendance records were set that still haven’t been broken.

Other disadvantages include a questionable human rights record. Homosexuality is banned in Morocco and FIFA has said a World Cup host must ensure an event free of discrimination based on sexual orientation, though that hasn't stopped Russia and Qatar.

Who Is Supporting The Morocco World Cup Bid?

Around 33 FIFA members have already thrown support behind the Morocco World Cup bid, including Qatar, Russia, France and Germany, though none of these statements is binding in any way. Many African nations are also expected to vote for Morocco. Because each federation gets a single vote, the African voting bloc will be huge for Morocco.

The bid has also received vocal backing from a number of soccer stars, including Cristiano Ronaldo, Diego Maradona, Mohamed Salah and Roberto Carlos.

How Does It Stack Up To The U.S./Mexico/Canada Bid?

Well, let’s just take a broad look at the two host books. The United Bid is 530 pages. The Morocco bid is 193 pages.

In reality, the FIFA World Cup voters will have to decide between a couple of factors. Do they want to have the tournament in a country (or countries) where records will undoubtedly be shattered in terms of attendance and money made? Or do they want to give the World Cup to a country that will be a great story, but will have to shell out massive amounts of money, putting its economy at risk just to hold a tournament that will be great for a month then leave the country wondering why the hell it did it in the first place?

Honestly, I feel like FIFA will vote for the latter.