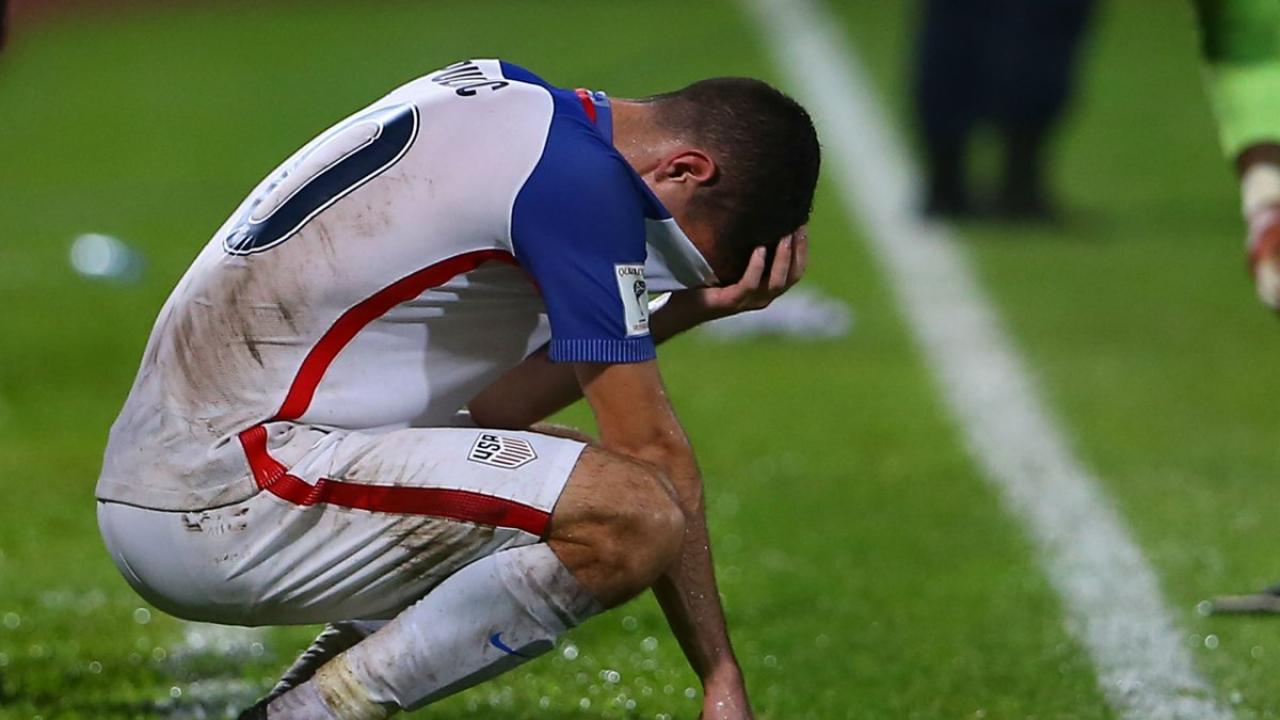 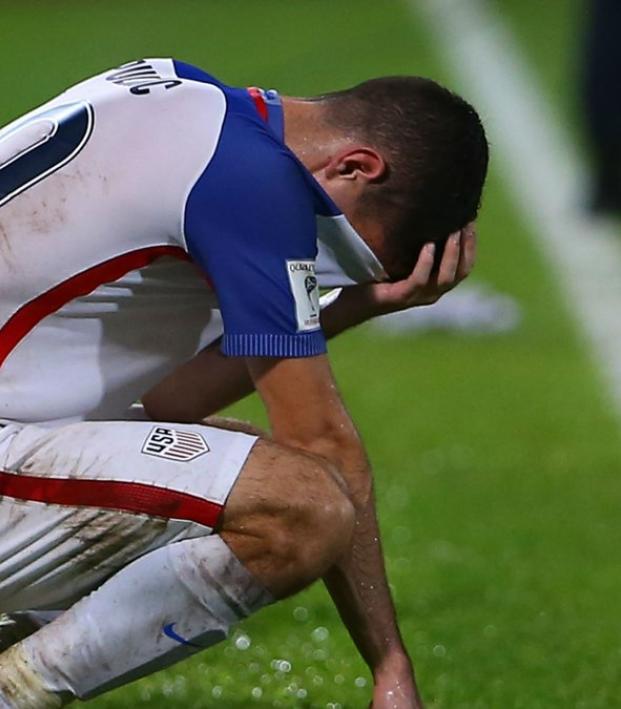 It Took All This Crazy Shit To Knock The U.S. Out Of The World Cup

Tuesday sure was wild, huh? CONCACAF CONCACAF’d the sh*t out of CONCACAF World Cup qualifiers for two insane hours. There was a lot to take in. A lot. Wacky own goals, rampaging ball boys and hugging commentators. And USMNT World Cup dreams dashed. So like Hillary Clinton after her election loss, let’s revisit what the hell just happened.

The U.S. against Trinidad and Tobago, Honduras against Mexico and Panama against Costa Rica all kick off simultaneously. Not that most of America could watch the USMNT given it was on BeIN Sports, which few people bother paying for.

In the final match day of the CONCACAF Hex, Mexico and Costa Rica were already qualified while Trinidad and Tobago was already eliminated. The U.S. only needed a draw to advance to the World Cup. Panama was in with a win while Honduras needed a win and help.

Two goals were scored in the 17th minute of the simultaneous matches. First, Oribe Peralta smashed home a shot from close range to give Mexico the lead. Shortly after, Trinidad and Tobago scored a comical own goal off of U.S. defender Omar Gonzalez.

At this point it was still early, plenty of time for the U.S. to get an equalizer. Plus with Mexico winning they could still qualify with a loss.

Four goals were scored in five minutes starting in the 34th minute to shake up the Hex. First, Alberth Elis equalized for Honduras. But then Costa Rica helped the U.S. out when Johan Venegas scored on a nice dink past the goalie to take a lead over Panama.

Not to worry, because Mexico’s Carlos Vela put El Tri back in front with a goal in the 39th minute. And we're just warming up.

All the Hex matches were at halftime and there was a chance to sneak a peak at what was going on in CONMEBOL, not to mention for fans to catch their breath. But this roller coaster ride wasn’t close to being done.

Christian Pulisic scored to pull the U.S. to within 2-1 in the 47th minute. The quick goal was just what Bruce Arena and company wanted. Surely they’d go on to score another to qualify for the World Cup, right? RIGHT?!

Here’s when things started to reach peak CONCACAF. In the 53rd minute against Costa Rica, Panama’s Gabriel Torres scored to knot the match at 1-1. Well, kind of. The ball never actually cross the goal line, nor did Torres touch the ball, which went out of bounds but was bizarrely given as a goal.

Welcome to CONCACAF, ladies and gentlemen. Let’s see those hotshots in Europe score a goal like that.

A minute later, Honduras scored one of the wackiest own goals imaginable when a shot ricocheted off the cross bar, off Mexico goalie Guillermo Ochoa’s head and into the back of the net, coming right after a Mexican defender was outmuscled in his own box.

In a span of two minutes the U.S. went from comfortably in to two goals away from being out thanks to two of the CONCACAF-iest goals you’ll ever see.

Honduras took the lead over Mexico in the 60th minute through Romell Quioto, the second Houston Dynamo player to score for Honduras on the night, putting Houston teammate Damarcus Beasley’s bid for a record fifth World Cup appearance in jeopardy. The U.S. fell to fourth place in the live standings, meaning they’d have to play an intercontinental playoff against Australia in November to reach Russia.

In the 77th minute, Clint Dempsey nearly became a double hero, scoring the goal that could have sent the U.S. to the 2018 World Cup while also setting the record for most goals by a USMNT player. Instead, his effort struck the post and went out of bounds.

@clint_dempsey off the post! @ussoccer still looking for a late equalizer. #TRIvsUSA pic.twitter.com/WkrBRXVUAP

It was agonizing for the U.S., but with Costa Rica holding Panama to a draw, the U.S. World Cup hopes were still alive. For a moment.

A minute after Benny Feilhaber had a close-range effort saved off the line, the sum of all U.S. fears became a reality. Roman Torres powered through a Costa Rican defender and smashed home an 88th-minute winner that sent Panama to the World Cup for the first time in history.

GOAL: Roman Torres thumps home the winner in Panama, all but ending @ussoccer hopes of making it to Russia  pic.twitter.com/w1TAnYDxvS

Perhaps it was payback for the Graham Zusi 91st-minute winner scored in the last match of qualifying for the 2014 World Cup, which kept Panama out and gifted Mexico qualification.

The whistle blew for full time in Cuovo as Trinidad and Tobago stunned the U.S. with a 2-1 victory. It was the first match to end and as Panama was entering stoppage time, one of the local ball boys chipped in with an impressive kick to waste time.

The only hope for the U.S. at this point would be a late goal from Mexico, perhaps with El Tri gifting the U.S. into the World Cup in a reversal of roles from 2014 qualifying.

First the Panama match and then the Honduras match went final. It was official: The U.S. would not be going to the World Cup for the first time since 1986.

But where there was devastation in the States, there was jubilation in Panama and Honduras. The reaction of these two announcers tells you everything you need to know about what the win meant to the country. The Panamanian president even declared Wednesday a national holiday after the win.

America’s alcohol reserves took a steep dip as Americans across the country took to the drink to cope with the shocking World Cup exit.

On the bright side, with the U.S. not competing in the World Cup next summer, instead of buying USMNT jerseys, American fans everywhere can spend their money on this exciting new line of clothes.

Taylor Twellman went on live on ESPN’s SportsCenter and delivered the Rant Heard ’Round The World. The video immediately went viral as Twellman’s outrage matched the feelings of many Americans. 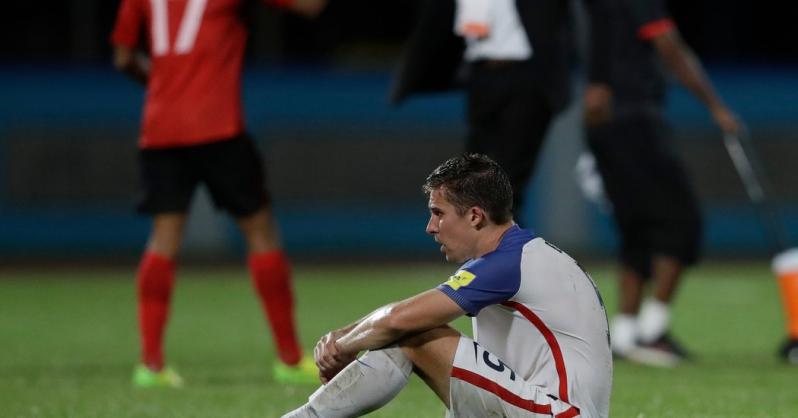 So let’s recap real quick: We had two incredibly fluky own goals, two club teammates scoring to keep a third club teammate out of the World Cup, three short timespans in which at least two of the three matches had goals scored in them, a goal awarded despite the ball never coming close to going across the goal line, two TV announcers hugging like they just got married, one TV announcer yelling like he’s Alex Jones and a partridge in a pear tree. It took all of that to keep the U.S. out of the World Cup.

It was an exhausting night. Let’s do it again in four years.