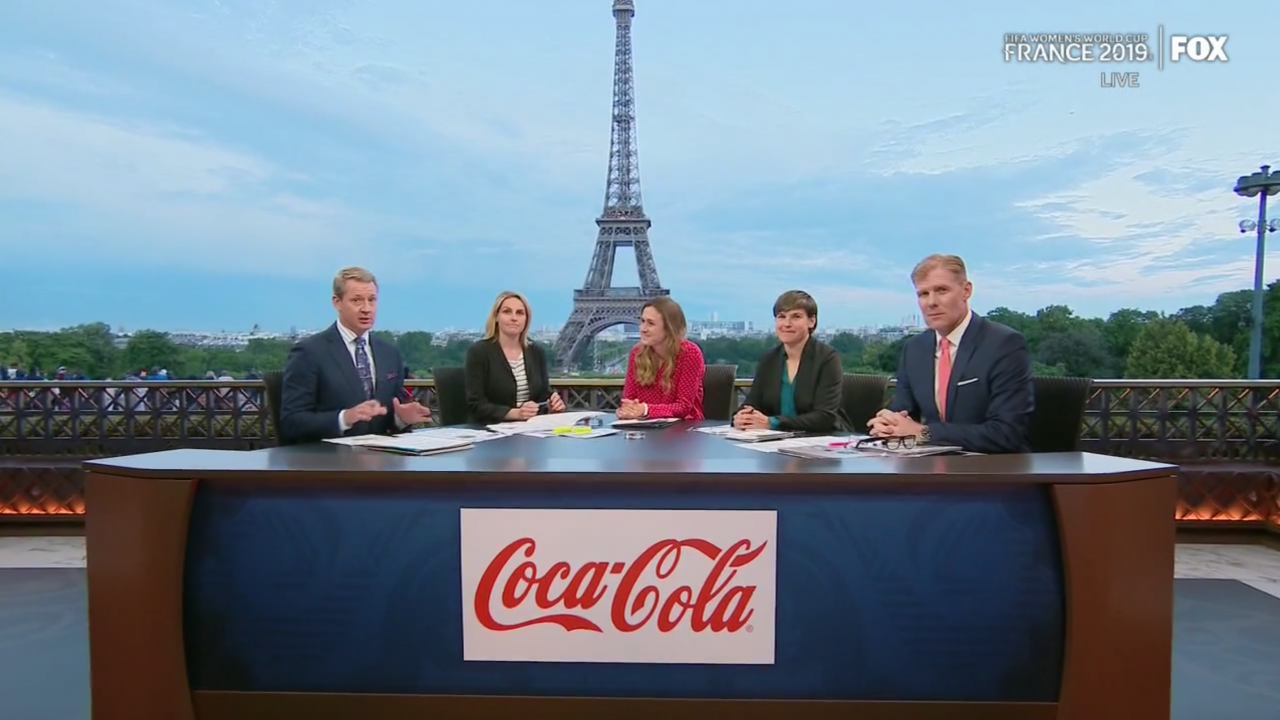 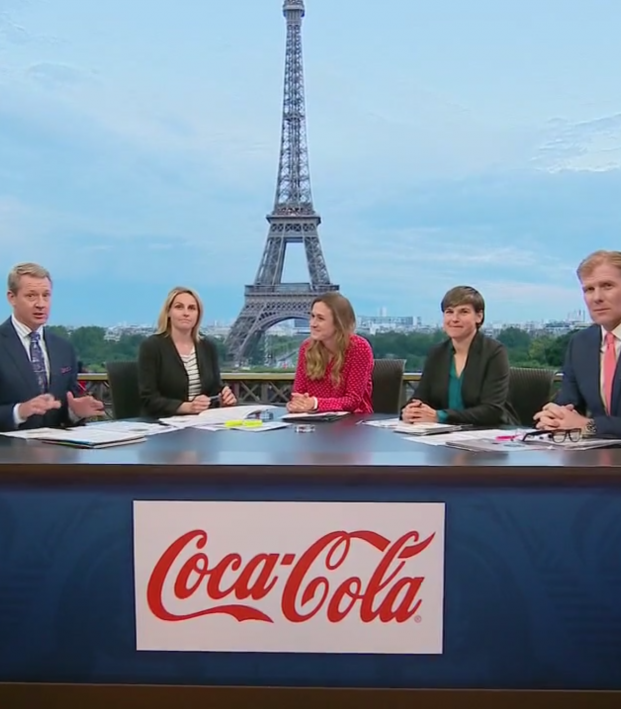 In 2018, for the first time ever, FOX owned the U.S. broadcast rights to the men’s World Cup.

This year, for the second time ever, FOX owns the Women’s World Cup U.S. TV rights.

We almost hate to admit it, but FOX is doing a great job.

After four days of Women’s World Cup without the U.S. playing, FOX finally got to show off its full force in France on Tuesday as the USWNT finally took the global stage against Thailand. The match itself was a 13-0 blowout, a record for most goals scored in a single World Cup game. But FOX acquitted itself quite well in covering the U.S. team.

We just wonder why FOX couldn’t bother trying to do as good of a job last summer for the men’s World Cup.

Last year, FOX barely sent any of its announcers to Russia for the men’s World Cup. Sideline reporters were non-existent, the analysis simple-minded and the overall feel was a bit insulting to soccer fans in America.

This year for the Women’s World Cup, FOX has an awesome set in the shadow of the Eiffel Tower and about as many reporters in France as goals scored by the U.S. against Thailand — which is to say a lot. Plus, a record-setting number of trailblazing women are broadcasting on FOX this summer.

This isn’t to say everything was perfect, but it showed FOX was actually trying, which is the least we can ask for after its showing in Russia last year and having to put up with the Champions League on TNT this past season.

Let’s start with the primary studio set, placed in front of the iconic Eiffel Tower. While FOX set up in the Red Square in Moscow last year, having the Eiffel Tower looming behind Alexi Lalas’ giant head is pretty damn awesome as far as set locations go. 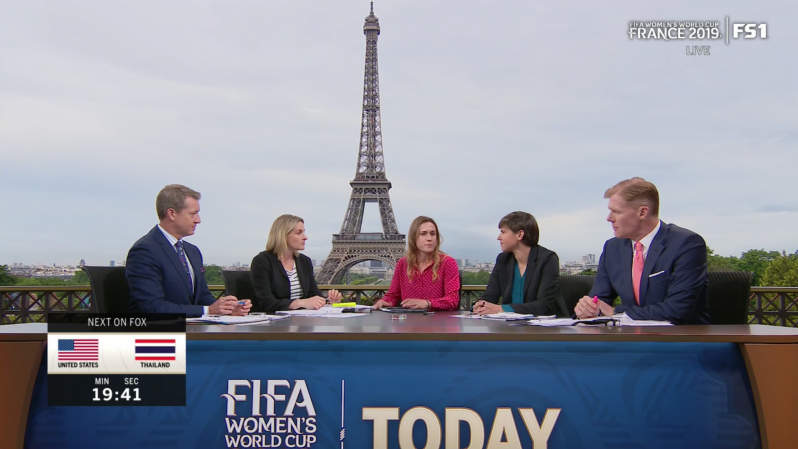 FOX WWC coverage starts with a set in the shadow of the Eiffel Tower. Screenshot: Fox

Then there were the broadcasters in France.

For starters, FOX actually had the audacity to put the live broadcasters — Aly Wagner and JP Dellacamera — in the stadium to call the game in person. This may not sound like a big deal, but most 2018 World Cup matches were called by FOX announcers in a studio back in Los Angeles. 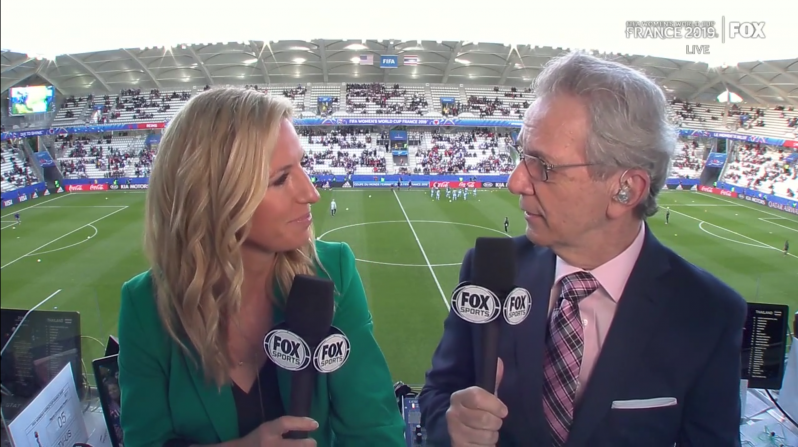 Aly Wagner and JP Dellacamera were in the stadium for USWNT vs. Thailand. What a novel idea. Screenshot: Fox

FOX also had reporters on the ground in France.

Alex Curry set up in the USWNT locker room before the match and was on the sideline during the Thailand game. 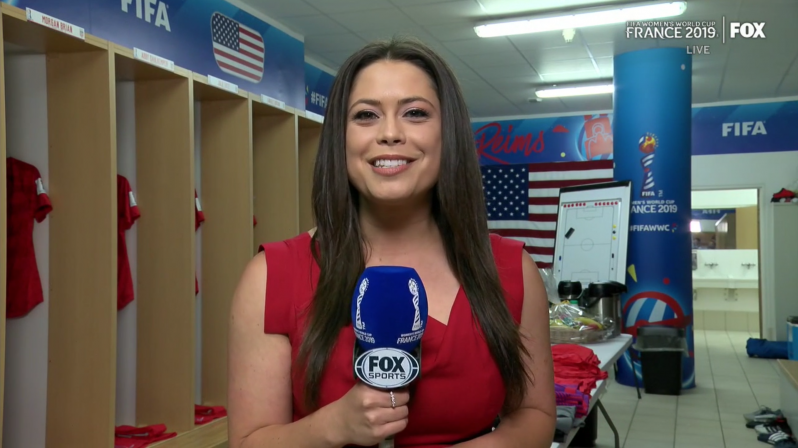 Alex Curry updated us on the USWNT from their own locker room! Screenshot: Fox

Jenny Taft, now a World Cup veteran, was with the American Outlaws beforehand, giving yet another angle to the USWNT’s drive for four. 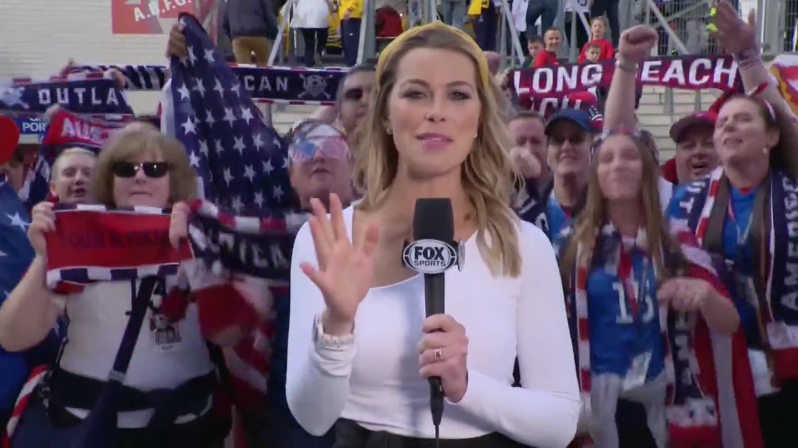 To top it all off, FOX showed an emotional D-Day feature before the Thailand match, even if the footage shown happened months ago.

The match, for better or worse, was more one-sided than a Megan Rapinoe haircut, but Fox did its best to keep viewers interested. It probably could’ve done a little better keeping viewers up to date on all the records being broken, but when the U.S. was scoring four goals in six minutes, it’s a bit hard for anyone to keep up.

There were, of course, a few negatives, because this is still FOX.

Following a trend in U.S. Soccer (and U.S. sports in general), FOX insisted all Tuesday morning that the USWNT match would start on Fox at 2 p.m. ET. The match started at 3 p.m. ET, but FOX wanted you to watch the hour-long pregame on Fox.

Anyone else annoyed that Fox keeps trying to tell us @USWNT vs Thailand starts in 20 minutes when it really starts in an hour and 20 minutes? pic.twitter.com/gFRrCcD3xO

FOX needs to double check its graphics, too. In debuting the first USWNT 2019 Women’s World Cup lineup, Kelley O’Hara was listed as “KELLEY OSHARA.” (We won’t get into the inaccuracy of using all capital letters for names, for now.) 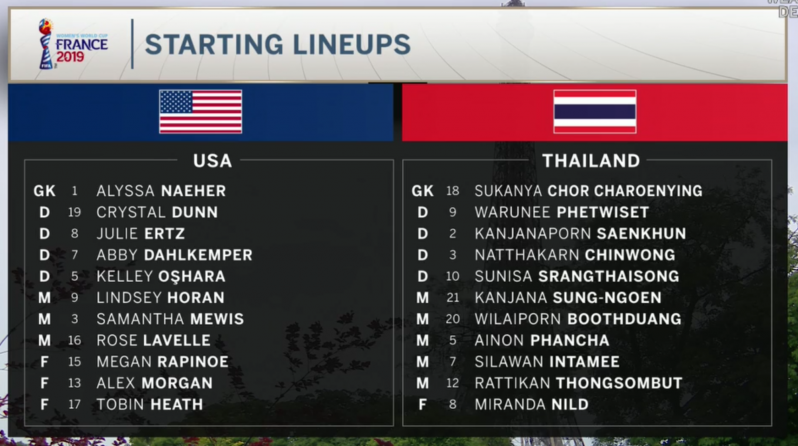 There were also unnecessary X-Men tie-ins that felt out of place and shoved down soccer fans’ throats. Nothing against the Dark Phoenix (please don’t kill me, Sansa Stark!), but we’re watching the Women’s World Cup here; the only Chastain we care about is Brandi, not Jessica.

Finally, there’s still Alexi Lalas on the set for FOX.

Love him or hate him, Lalas gets the conversation going, but you feel like he’s a bit of a prop for FOX at this point. If FOX wants to use Lalas to help hype up other Women’s World Cup matches, fine, but when it comes to the USWNT, FOX should focus on more deliberate coverage American fans want.

Admittedly, Heather O’Reilly is a massive homer — she’s still friends and teammates with some of the USWNT players — but at least she doesn’t say things for the sake of controversy. Ariane Hingst might be my favorite FOX analyst, even if the USWNT did break her team’s record for most goals in a single World Cup game.

Having seen FOX show it can actually do a decent job when it wants to, we just wonder why the hell it didn’t give any shits about last summer’s World Cup. Sure, the U.S. tragically wasn’t in it, but it’s still the biggest sporting event in the world.

At least FOX is covering the USWNT the way it should’ve covered the men’s World Cup. Let’s hope it keeps it up and doesn’t ignore the tournament if the USWNT somehow gets knocked out in the quarterfinals by France.

Given how the U.S. played against Thailand, the Americans — FOX and the USWNT — look like they’ll be sticking around in France until the final.