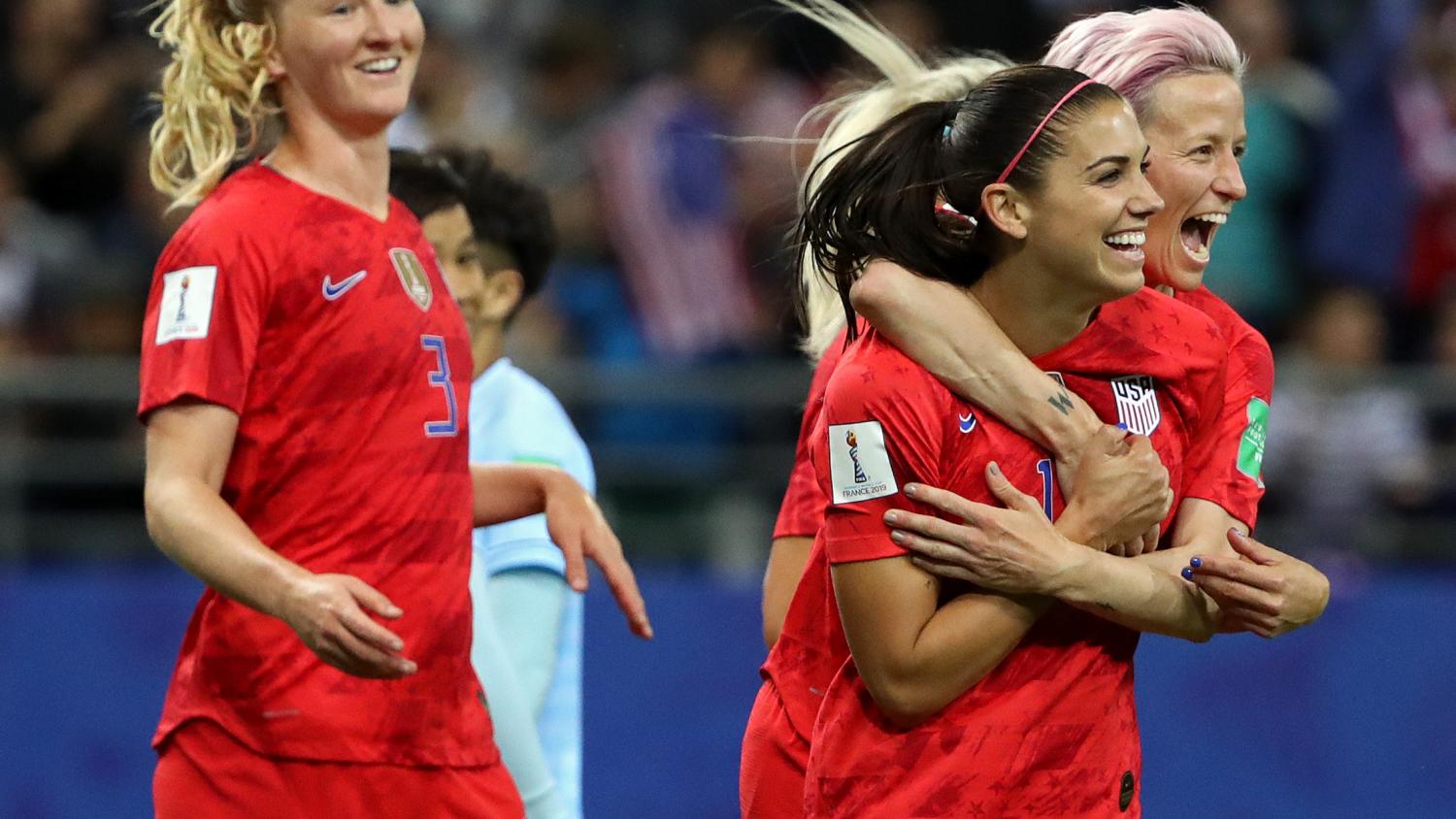 The U.S. put 13 past Thailand. Was it a World Cup record?
Getty Images

The U.S. women’s national team ran rampant on Thailand on Tuesday. The last teams to kick off their tournament, the U.S. flirted with setting the record for most goals scored in a single World Cup game.

The U.S. finished with a 13-0 win over Thailand, including four goals scored over a six-minute span early in the second half, the fastest four goals in Women’s World Cup history.

But was it the record for most goals scored in a single World Cup game?

Most Goals Scored In A Single World Cup Game

Heading into 2019, the record for most goals scored in a single World Cup game belonged to Germany when it put 11 past Argentina at the 2007 Women’s World Cup.

Germany’s 11-0 rout of Argentina opened the 2007 tournament; Die Nationalelf went on to win it all that year. Birgit Prinz, second all-time in Women’s World Cup goal scorers, scored a hat trick that day, as did Sandra Smisek. Two other players recorded a brace for the Germans, who led 6-0 at halftime. Prinz finished with five goals that tournament, one behind Abby Wambach and two back of Golden Ball and Golden Show winner Marta, whose Brazil lost in the final.

On Tuesday, the U.S. equaled that record by the 84th minute, then went further.

It seems weird to say when she shipped so many goals, but Thailand keeper Sukanya Chor Charoenying actually made some good saves to keep the U.S. from adding too many goals to its tally.

Respect for the Thai goalkeeper Sukanya Chor Charoenying, who has made several good stops the last few minutes in what can't be an enjoyable experience. Respect for the whole team, which keeps playing hard.

But the U.S. kept scoring, with Alex Morgan netting her hat trick to make it 8-0 in the 74th minute, setting the record for most U.S. goals in a single Women’s World Cup match. The previous USWNT record was seven against Nigeria.

The goals continued to pour in, reaching 10 when Morgan made it four in the 81st minute. It was 11 when Mal Pugh recorded her first Women’s World Cup goal, becoming the fourth U.S. player to do so after Sam Mewis, Lindsey Horan and Rose Lavelle.

The U.S. then set the record with a 12th in the 87th minute, with Morgan scoring her fifth of the match. She scored once in the 2015 Women’s World Cup. The five goals was a Women’s World Cup record, tying American Michelle Akers.

Carli Lloyd finished it off with a goal in the 92nd minute and the referee mercifully blew her final whistle moments later.

The final goal pushed the USWNT past the record for most goals scored in a single World Cup, men or women. The previous mark was 12 in Austria’s 7-5 win over Switzerland at the 1954 men’s World Cup.

Here are all the records the USWNT set on Tuesday.

Records Set By USWNT vs. Thailand

The 13 goals was especially rough for everyone participating in our USWNT 2019 Women’s World Cup drinking game, which required two sips per U.S. goal. That’s 26 sips before you get to any of the other rules, such as VAR being used or Jill Ellis scowling on the sideline — which she was even as the U.S. continued to score in double digits.

After the record for most goals in a single World Cup game by one team on the women's side, Switzerland and Ecuador combined for 11 goals in a 2015 match, won 10-1 by the Swiss.