Many utilized the build-up to the USWNT’s World Cup opener against Thailand to criticize manager Jill Ellis, which is an ingenious position to take because you’re right if they win (“In spite of her!”) and you’re right if they lose (“Told ya!”), but after watching the States utilize “the Zdeněk Zeman method” at kick off before shifting into a sort of 2-3-5 in possession, I gotta say, I’ve got no qualms with her approach.

To be fair to Thailand, the USWNT played it straight for about 32 minutes — the time it took to go 3-0 up following goals from Alex Morgan, Rose Lavelle and Lindsey Horan.

But after that, Julie Ertz was given free rein to push further forward from center back, left back Crystal Dunn frequently overlapped beyond left wing Megan Rapinoe and the right-hand side featured an assist from Kelley O’Hara, two goals from Lavelle and the usual dance with the devil from Tobin Heath.

Once again. @peteeee has pinpointed the exact moment Tobin Heath added another soul to her collection. Pour one out. pic.twitter.com/Go0AqFTejE 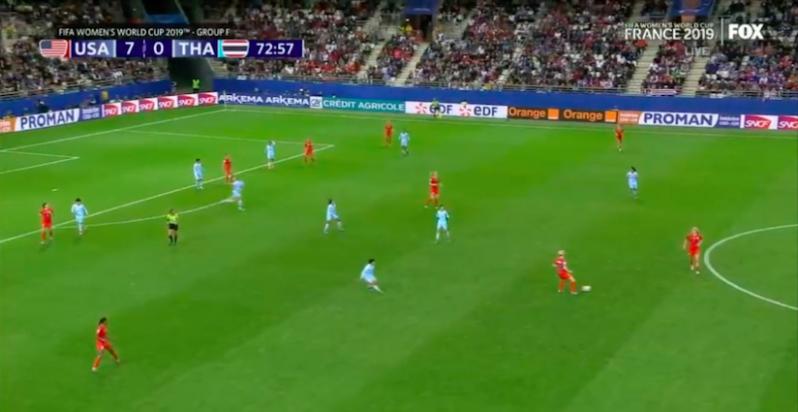 That’s not to say it was always easy for the U.S.

Take a look at the fourth goal. You’ll see that with six players all attempting to attack the same area of space, the USWNT had to switch it to Sam Mewis and then she scored. This is one danger of attacking with every player on the pitch: too many options and too much movement, resulting in too many goals.

And then it was 7-0 and Ellis brought on Carli Lloyd, Christen Press and Mallory Pugh. They would run up the score to 13-0 while also backtracking, fighting to keep every ball in play and generally being relentless in their onslaught. The celebrations, also, remained turnt.

Despite leading 12-0, we got three minutes of stoppage time, and the U.S. even took advantage of that to further punish Thailand.

Here are the final stats. If you are a young child from Thailand, look away.

Will the USWNT utilize the same strategy on Sunday against a Chile team that’s ranked even lower than Thailand? You’d think so.