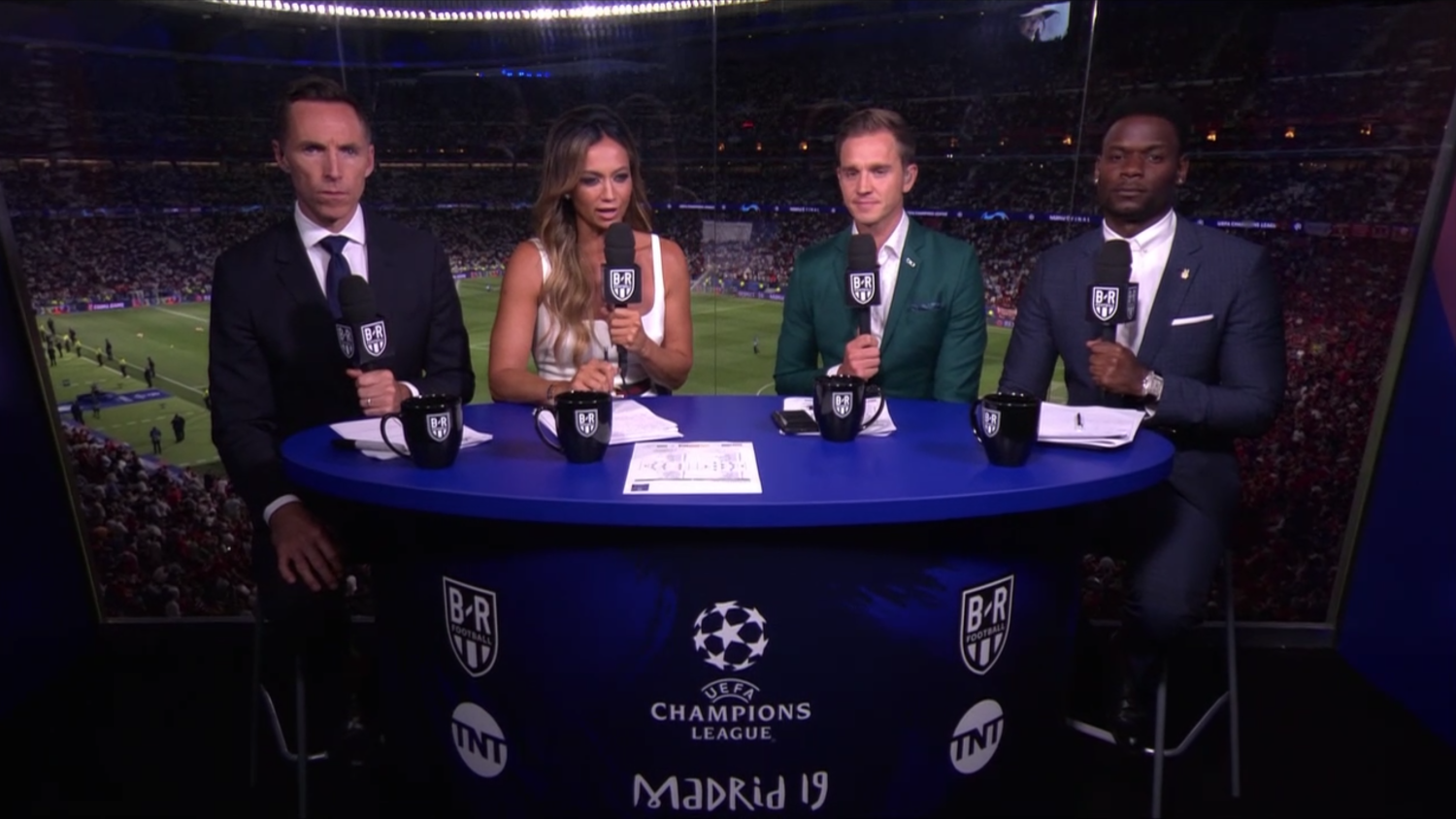 TNT couldn’t even be bothered to send its own announcers for the Champions League final.
Screenshot: TNT

Turner Sports — including TNT and B/R Live — had its first go at broadcasting the Champions League for the 2018-19 season. It was a huge opportunity for the American broadcaster to venture into soccer, a domain previously dominated by ESPN, FOX and NBC.

Americans have grown up on watching the Champions League on ESPN and FOX, big broadcasters with a history of televising big events. FOX had its share of problems, only highlighted by NBC’s brilliant coverage of the Premier League, but nothing has compared to what we’ve seen from Turner Sports during this season’s Champions League.

TNT’s coverage of the Champions League started on the wrong foot with the announcement of B/R Live, where most matches were hidden behind paywalls. Turner Sports opted to use just one of its plethora of channels (the broadcaster uses three for the NCAA basketball tournament), shoving the remaining matches on the expensive streaming service that no one wants to pay for.

The actual coverage of the event also had a rocky start, with Turner hiring unpolished, inexperienced talent for its studio show alongside FOX’s Kate Abdo and Stu Holden. Maurice Edu and Tim Howard weren’t awful this season — and they improved as it went on — but they weren’t really prepared at the start of the season and it showed.

Perhaps most baffling was TNT’s decision to hire former NBA MVP Steve Nash to be a soccer analyst. Now, I like Nash, even though he’s a Tottenham fan, but it makes no sense to hire an analyst for the biggest annual tournament in soccer who went pro in a different sport.

Nash’s hire looked even worse when TNT allowed him to call a match with Stu Holden in Barcelona, featuring Nash’s beloved Spurs. Holden is a decent color commentator (though many would disagree with that), but he’s definitely not a lead announcer, as he was asked to do for that match. Nash was, well, a fanboy.

The Holden-Nash pairing was the only time (at least that I can remember) that TNT used its own announcers for a Champions League broadcast. Sure, the studio staff was mostly American — and located in America — but Turner Sports went the cheap route and didn’t send announcers to Europe. Although FOX went cheap on its coverage of the 2018 World Cup, it regularly had its own announcers not just in Europe but calling the big Champions League matches, even if the Gus Johnson experiment was doomed from the start.

You’d think TNT would send some announcers to Madrid for the Champions League final, but you probably guessed by now that did not happen.

Perhaps because no one actually wanted to give Turner Sports money to watch the Champions League on B/R Live but probably because Turner Sports doesn’t actually give any fucks about soccer, TNT used British announcers for the UCL final between Tottenham and Liverpool on Saturday. (The studio team of Abdo, Holden, Edu and Nash was in Madrid, but only for pregame, halftime and postgame coverage. Credit to TNT for interrupting Saturday reruns to show a full 90-minute pregame show.)

Even worse, TNT used two different sets of announcers, starting with the BT Sport (UK) feed before changing to the world feed by the second half.

It’s bad enough that TNT doesn’t care enough to put its own brand on the game — think about how great Arlo White has been to spread the Premier League into America homes — but to not even realize which feed you’re using until halfway through the match?

I was a bit stunned to hear Steve McManaman on my TV for the first time since the 2016 Euros when he was with ESPN, but by the second half the announcers had changed.

As for why they took BT feed for first half, they are getting back to me.

Poll: Which feed would like TNT to take if there is OT in Champions League Final?

To be fair, the British announcers were probably better than anyone TNT would have sent to Madrid.

Can you imagine Holden and Nash trying to call this game? Nash would be a mess of nerves and Holden would forget he’s lead announcers for minutes at a time.

Enjoying hearing promotion for @btsport on the US feed of Champions League final on TNT... I WISH I could get BT in the US instead of being stuck with @brlive and its indifferent Champions League coverage

One thing I did learn from the TNT broadcast of the Champions League final is that the NBA Finals are still going on — I had just assumed the Golden State Warriors had already been given the trophy months ago.