Fox Watching: Ranking Each Announcer Pairing And How They Compare To ESPN’s 2014 Lineup 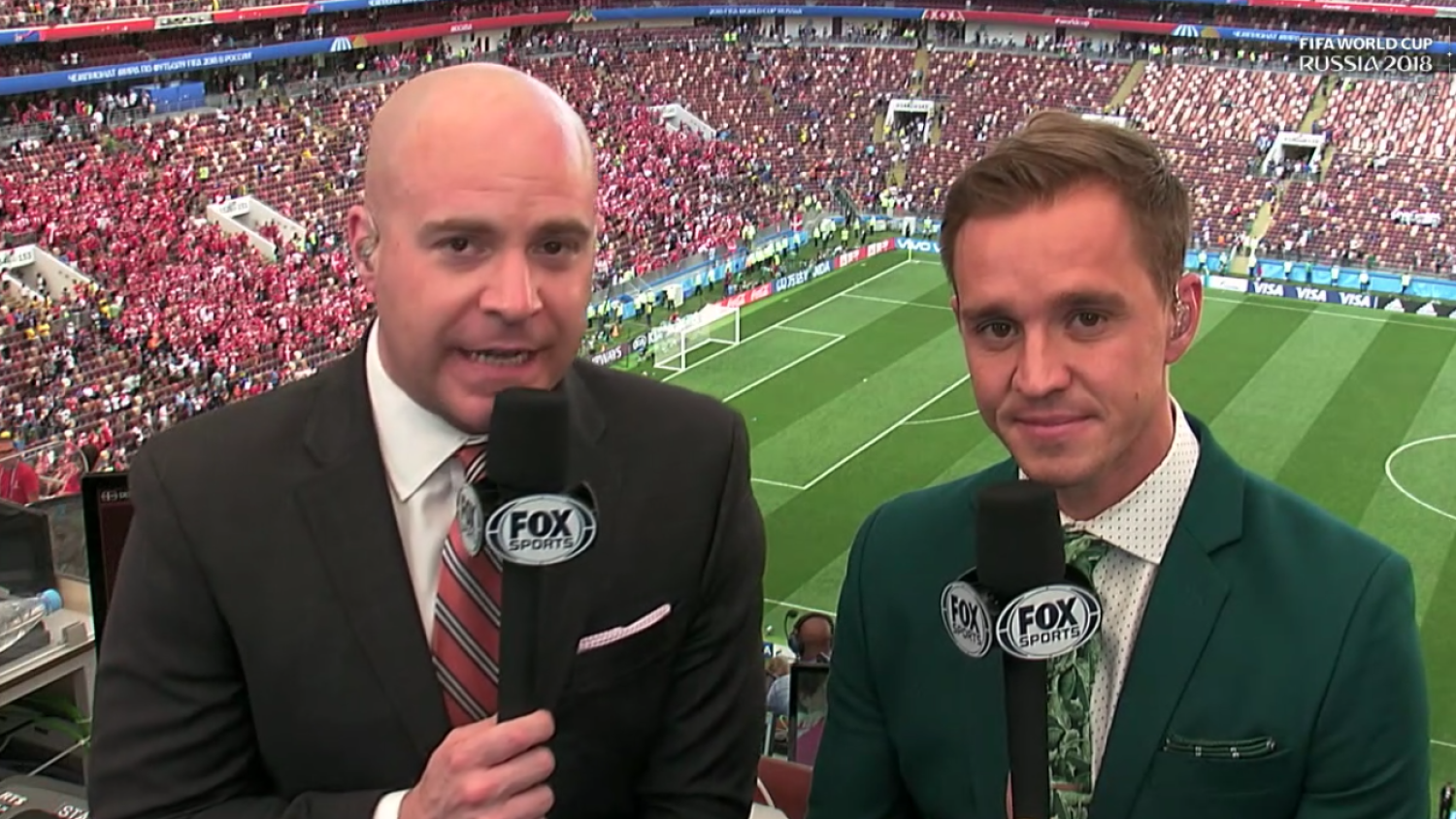 We are now done with the group stage of the 2018 World Cup and — aside from Thursday’s matches — it’s been an absolute treat. The tournament has thrilled, enraged, inspired and, most of all, confounded Fox World Cup announcers.

Despite the absence of the United States, the 2018 World Cup has been as engaging as any in recent memory. We didn’t just have one Landon Donovan-against-Algeria moment; we had three groups decided at the death.

Group B ended with some VAR craziness in stoppage time of both matches to flip the top two teams. Argentina scored in the 86th minute to secure passage into the Round of 16 and moments later Croatia scored the winner against Iceland in Group D. And in Group F, Mexico thought it was dead until South Korea scored twice in stoppage time to oust reigning champion Germany.

To start out this Fox Watch though, we have to call out Fox for not switching to the Saudi Arabia-Egypt match after the Russia-Uruguay game ended. Instead FOX went to a commercial and FS1 had a late winner from Saudi Arabia. After that, Fox did a better job of switching to whichever match was still going on.

Despite this, Fox celebrated with this tweet touting ratings from Wednesday.

Fox hilariously ignored the fact that the comparable Wednesday date from 2010 including Donovan's winner at the death against Algeria for the USMNT, plus matches involving England, Germany and Nigeria. Instead, it went with a Thursday on which the only match of note was Italy getting knocked out by losing to Slovakia. It could have gone in the other direction (Tuesday), but that would've included a match with Mexico.

Nonetheless, with the exception of Thursday, the final group-stage matches produced some thrilling television. But the best part of the simultaneous kickoffs this week is that you only had to listen to one set of Fox World Cup announcers at a time — and you could freely mute the broadcasters you liked least to focus on another match.

With that in mind and with 48 of the 64 matches in the books, we thought it would be a good idea to rank the six pairs of Fox World Cup announcers.

But first, a word on how these broadcasters compare to ESPN’s team in 2014.

At the Brazil World Cup, ESPN brought 13 announcers — six play-by-play and seven analysts (Taylor Twellman and Steve McManaman traded off with Ian Darke). The crew was experienced and well known in the soccer world. The only pairing without World Cup experience was Jon Champion and Stewart Robson, but both were already known commodities ahead of the tournament.

The play-by-play men in particular were among the best ESPN could wrangle: Darke, Champion, Adrien Healey, Daniel Mann, Fernando Palomo and Derek Rae. The analysts were all pretty good too, aside from McManaman: Twellman, Efan Ekoku, Kasey Keller, Roberto Martinez, Jaime Moreno and Robson.

Compared to the group Fox hired for the 2018 World Cup, the experience gap is immense. Rae, JP Dellacamera and Jorge Perez-Navarro were the lone voices with World Cup experience, but Perez-Navarro had only called the World Cup in Spanish.

So before we get into the rankings of the Fox World Cup announcers, it should be mentioned that only one or two crews would even crack the top five if we were to include ESPN’s 2014 lineup.

That said, this is 2018 and we have to, as Fox's Mariano Trujillo always says, suck it up. Or watch Telemundo. So here are our rankings of the six pairings of Fox World Cup announcers.

Oh boy, these guys are bad.

Followill has regularly shown a lack of soccer knowledge and never was that more clear than the Japan-Senegal match. For Senegal’s opening goal, any viewer could tell Senegal had just scored and was celebrating, but Followill was just silent, trying to figure out what just happened.

Sadly, it wasn’t the first time he or other a Fox announcers were confused because they weren't in Russia; it won’t be the last. Followill is by far the worst play-by-play man and it shouldn’t be a surprise. Most of his broadcast experience comes from basketball with the Dallas Mavericks or college football.

Then there’s the analyst, Barton. One of my favorite lessons from a journalism teacher was to avoid clichés like the plague. I don’t think Barton understands that cliché. Fox could have found a better soccer analyst if it had just thrown a bunch of British football clichés into an algorithm and let AI take over.

Barton doesn’t seem to fully comprehend the modern game of soccer and instead praises teams for trying hard or putting in a good effort. That may appease fans in England, but this is the World Cup — getting stuck in won’t get you anywhere. He is truly difficult to listen to calling a match.

YEP. Followill and Barton had NO IDEA what was going on. https://t.co/TVc8W0y28F

When I hear a match and I hear Glenn Davis’ voice, I know I’m going to hear solid play-by-play from someone who knows the game. As a Houston native, I’ve heard plenty of Davis’ calls with the Dynamo and know the former player is an experienced and knowledgeable commentator.

But his pairing with Cobi Jones leaves much to be desired. Though it’s improved a bit during the World Cup, the two have an extreme lack of chemistry.

Jones, a former USMNT forward, is unpolished as a broadcaster, and I think he would be far better if he were actually calling games in person instead of from a booth in Los Angeles.

@FOXSports The commentary team of Glenn Davis and Cobi Jones on the #SUICRC game are AWFUL. Neither can provide comprehensive analysis or say anything remotely interesting. Please don't let them advance to the round of sixteen. #worldcup #awfulannouncing #cobijones

@FOXSports the best games to listen to as far as announcers for the World Cup have been by Glenn Davis and Cobi Jones. Please have them do more!@GlennDavisSoc @cobijones @FIFAWorldCup

Second half of #SRBvsSUI underway on FOX
with Glenn Davis and Cobi Jones commentating. pic.twitter.com/Ep7gvTZV1A

Maybe it’s because JP Dellacamera reminds me of the 2002 World Cup, but I enjoy listening to this guy call a match. He’s as experienced as anyone on this lineup, having called World Cups for American audiences for decades on both TV and radio.

It’s just unfortunate that Tony Meola can be a bit drab. The former USMNT goalkeeper, like his former teammate Cobi Jones, is unpolished as an analyst and brings the broadcasts down. He’s not necessarily bad, but to give your No. 2 analyst position for the biggest tournament in the world to a guy who’s been doing this for three years tells you all you need to know about how Fox feels about soccer.

That said, both are boosted by the fact they’re actually in Russia.

Dellacamera: "The fans have phones. They know the score of the other game. Not like when you played, Tony."
Meola: "We had phones."

I like Stuart Holden, but that could just be because, like Davis, he has Houston connections. This pairing has perhaps the second-best chemistry (behind the next team) in the tournament, but by far biggest problem with them is they were made the No. 1 Fox World Cup announcers team despite both being just 32. It’s so apparent Fox just wanted to find cheap talent instead of the best talent.

That said, these guys aren’t bad. I thought John Strong’s use of “Iceland beats Argentina 1-1” was great. I’ve seen some people complain that Holden sounds like a young boy up there, but he did spend the 2010 World Cup on the bench (and came on as a sub in the 1-1 draw with England), so he knows a little something about the tournament.

I just wish he would throw away that green suit. 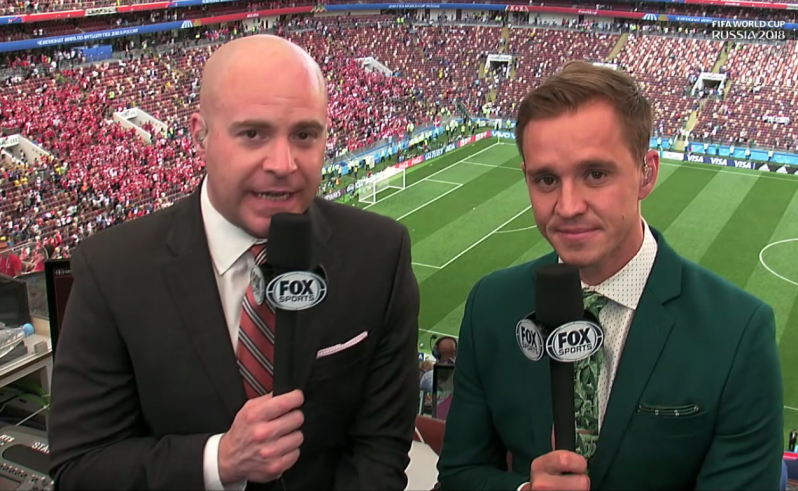 For real though can we get some different commentators for the Germany games? John Strong and Stu Holden are killing me. #WorldCup #GER #haters

As if it wasn't already apparent from their Champions League broadcasts, John Strong and Stu Holden have been fantastic calling their #WorldCup games. Easily the best tandem Fox has.

A lot of people really hate these guys — with a passion. I like that they’re goofy as fuck and are willing to say anything.

Jorge Perez-Navarro is a World Cup veteran, but he’s never called a World Cup in English, so it’s a bit different. Mariano Trujillo has done work with Fox Deportes, but like most people on the team of Fox World Cup announcers, he has little experience.

That said, they make it work because they have fun and don’t take everything too seriously, like Perez-Navarro endlessly referencing Aerosmith because Peru's coach looks like Steven Tyler. Trujillo has made it a habit of saying “suck it up” to players and on Thursday Perez-Navarro even asked if he could steal the line, which is great banter for a match that no one was watching anyway (Panama-Tunisia).

They can be annoying as hell at times though.

Jorge Perez-Navarro and Mariano Trujillo are probably my favorite commentator duo for this world cup. I don't care how many times I have to turn down the volume when Perez-Navarro gets excited

The cynic in me suggests Fox only gave Aly Wagner a spot as an analyst because the company wanted to be seen as forward-thinking, or maybe they thought they could hire her for cheap, or they needed to fill the blonde woman quotient like on Fox News. But Wagner has been a pretty decent broadcaster.

What helps Wagner is she’s working with the best play-by-play man of all Fox World Cup announcers. Rae is experienced, knows his stuff and rarely misses a beat.

Together, the pair isn’t anything spectacular, but you’re never going to be annoyed by something they say, which is honestly the best thing you can say about any of these blokes on this list. I just wish they were actually in Russia.

It’s 2018 so this will go down as sexist but whatever. Aly Wagner is very not good at announcing soccer games.

Take a drink every time Aly Wagner manages to mispronounce a widely known and easy to say surname.

Fox is pretty bad. Derek Rae and Aly Wagner the highlight of a pretty poor bunch. Had to switch to Telemundo during the Peru match as I couldn’t take it (I’m also not bilingual).

Derek Rae comments on Uruguay’s “fighting spirit” and not missing a beat Aly Wagner adds, “And the biting spirit.”

They are by far my favorite Fox #WorldCup announcing team.