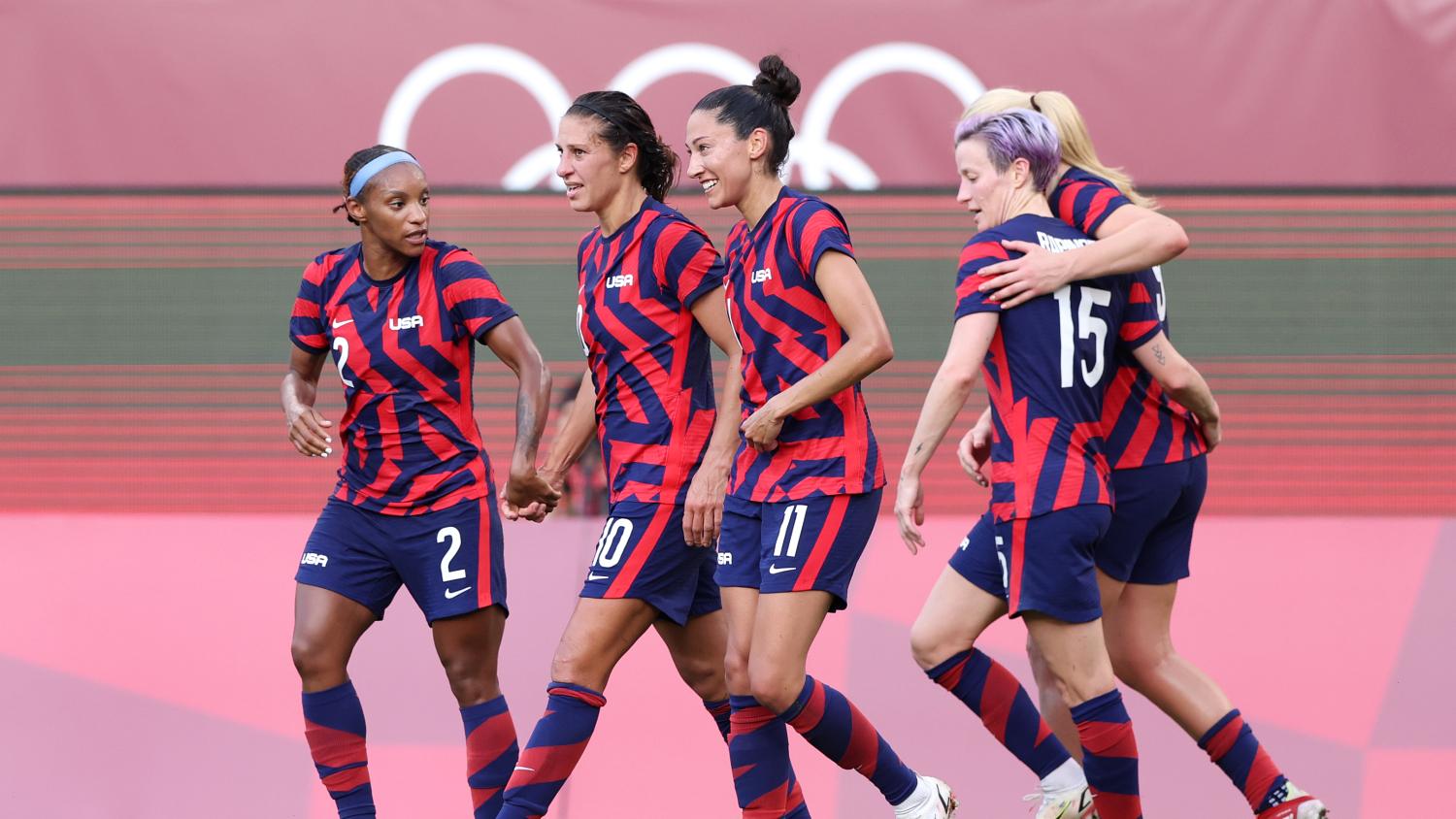 Nine of the world’s best footballers want answers. Christen Press, Crystal Dunn, Tobin Heath, Carli Lloyd, Sam Mewis, Alex Morgan, Kelley O’Hara, Megan Rapinoe and Becky Sauerbrunn are questioning how so many kids and women were allowed to be abused repeatedly just for playing the sport they love. And the women’s soccer world hopes they get those answers.

On Tuesday, the Washington Post published a report detailing decades of alleged verbal, physical and sexual abuse of youth soccer players by former Chicago Red Stars coach Rory Dames. On Wednesday, the nine aforementioned USWNT stars together signed onto a letter sent to U.S. Soccer president Cindy Parlow Cone and former president Carlos Cordeiro — who are both running for USSF president this spring — asking how this could happen and what is being done to prevent it from happening again.

Dames resigned from the Red Stars shortly after his team lost the NWSL Championship game in November. A few hours later, the Washington Post reported prominent NWSL and USWNT players, including Press, had accused Dames of being emotionally abusive while coaching Chicago. Press first raised concerns in 2014 and again in 2018, but the NWSL and U.S. Soccer did nothing. Dames was the latest in a long, long list of NWSL coaches who left the league in 2021 after being accused of abusive behavior.

This week’s allegations are perhaps more damning and include harassment and name-calling of youth players and coercing one player into having sex with Dames, highlighting the systemic issues in women’s soccer in the U.S. Dames has denied the charges through a lawyer.

Now USWNT players are renewing their inquiry over how the USSF allowed Dames to continue coaching not only at the professional level, but at the youth level, where he owned an elite club in the Chicago area.

(Full text of the letter is available below.)

The letter asks poignant questions of the USSF and its leadership. For years women’s soccer players, including the biggest stars the game has ever known, have pointed out abusive treatment only to be ignored. These players are tired of being disregarded and want answers as to how the USSF allowed this to continue, especially after it had been reported by minors decades earlier.

“The allegations documented in The Washington Post on Tuesday — of systemic, egregious, and horrifying abuse of young girls by their soccer coaches — are sickening,” the letter reads. “But what is worse is that this is yet another instance where the willful inaction of USSF’s leadership jeopardized the health and safety of its players.”

The letter calls out the candidates for wanting to look forward without accountability for past actions.

“In both of your campaign platforms to be re-elected as Presidents of USSF, you discussed the need to look forward, not back. But without true accountability for the past, there is no promising future. For years, you allowed coaches and owners to rampantly abuse players. This unchecked and unpunished power endangered the safety, well-being, and careers of far too many women and girls. We suffered so that you could protect your bottom line.”

The USWNT players bring up excellent points, including questions about transparency and the investigations being conducted by former acting Attorney General Sally Yates into abuse in the NWSL. Many in positions of power in the NWSL — from owners to the league itself — have refused to comment on allegations, hiding behind the ongoing investigation, which has yet to make any results public four months later.

The letter laments that, because current and prior investigations haven’t been released, players have gone to the press to make these issues public. This was the case with former Portland Thorns and N.C. Courage coach Paul Riley, who was accused of sexual coercion, among other abuses. The NWSL teams involved said an investigation was conducted, but results were never made public, no one was punished and Riley was allowed to continue coaching.

Fans of women’s soccer — and of kids not being abused — hope the questions from these USWNT players can be answers promptly and in full. Aside from a few coaches losing their jobs, there has not yet been a full reckoning for bad actors in the sport.

USSF and other soccer organizations must do more to protect women’s soccer players, especially youths, from this sort of behavior.

In full the letter reads as follows.

Ms. Parlow Cone and Mr. Cordeiro:
The allegations documented in The Washington Post on Tuesday — of systemic, egregious, and horrifying abuse of young girls by their soccer coaches — are sickening. But what is worse is that this is yet another instance where the willful inaction of USSF’s leadership jeopardized the health and safety of its players. Over the years, while we played on the USWNT and in the National Women’s Soccer League, many of us reported to USSF instances where, as adults, we experienced abusive conduct by our coaches. Now we have learned that this abusive treatment also was repeatedly reported by minors and that USSF failed to respond to protect these young players. That is utterly disheartening.
Last year, many of our colleagues courageously spoke out about the verbal, emotional, and physical abuse they suffered during their time in the NWSL. Their bravery sparked an important reckoning and reflection in our sport, both here and abroad. But these players never should have had to turn to the press to protect themselves and future generations. USSF had the obligation to protect its players — yet it stood by as abuse continued to occur unchecked. For starters, USSF should have immediately removed coaching licenses from abusers. Instead, USSF allowed those individuals to coach while saying it would investigate. USSF failed to do the bare minimum — to keep us and the young girls who play in the youth leagues safe.
Ms. Parlow Cone, in October 2021 — more than four months ago — you committed to: (1) vigorously investigate the reported conduct, (2) gain a “full and frank” understanding of the factors that allowed it to happen, (3) share the results of this work, and (4) take meaningful steps to prevent this abhorrent behavior from happening again.
We are writing to you today, on behalf of thousands of little girls across our country who play in the youth leagues, to demand full transparency and accountability in addressing these systemic problems. Where are the results of the investigation that you are spending USSF time and resources conducting? Has the investigation being conducted by Ms. Yates yielded any of this information that players are forced to report to media because you have not released the information or taken any action related to it? Do players experience fear of continued reprisals and retribution from USSF? Most importantly, what steps will you take to make sure that every girl and woman can play soccer safely in the USSF and the NWSL?
In both of your campaign platforms to be re-elected as Presidents of USSF, you discussed the need to look forward, not back. But without true accountability for the past, there is no promising future. For years, you allowed coaches and owners to rampantly abuse players. This unchecked and unpunished power endangered the safety, well-being, and careers of far too many women and girls. We suffered so that you could protect your bottom line.
To rebuild the trust of players, fans, and sponsors — to move forward — USSF must show that it is serious about change. We demand that USSF release the full findings of its investigation in a timely manner and commit to enacting meaningful institutional reforms to protect its players.
We will not stop fighting until we can ensure that this sport is safe for ourselves, for our daughters, and for every little girl who cheers us on and dreams of one day playing the sport we all love. We hope your immediate actions will demonstrate that you both share this goal.
Sincerely,
Christen Press
Crystal Dunn
Tobin Heath
Carli Lloyd
Samantha Mewis
Alex Morgan
Kelley O’Hara
Megan Rapinoe
Becky Sauerbrunn