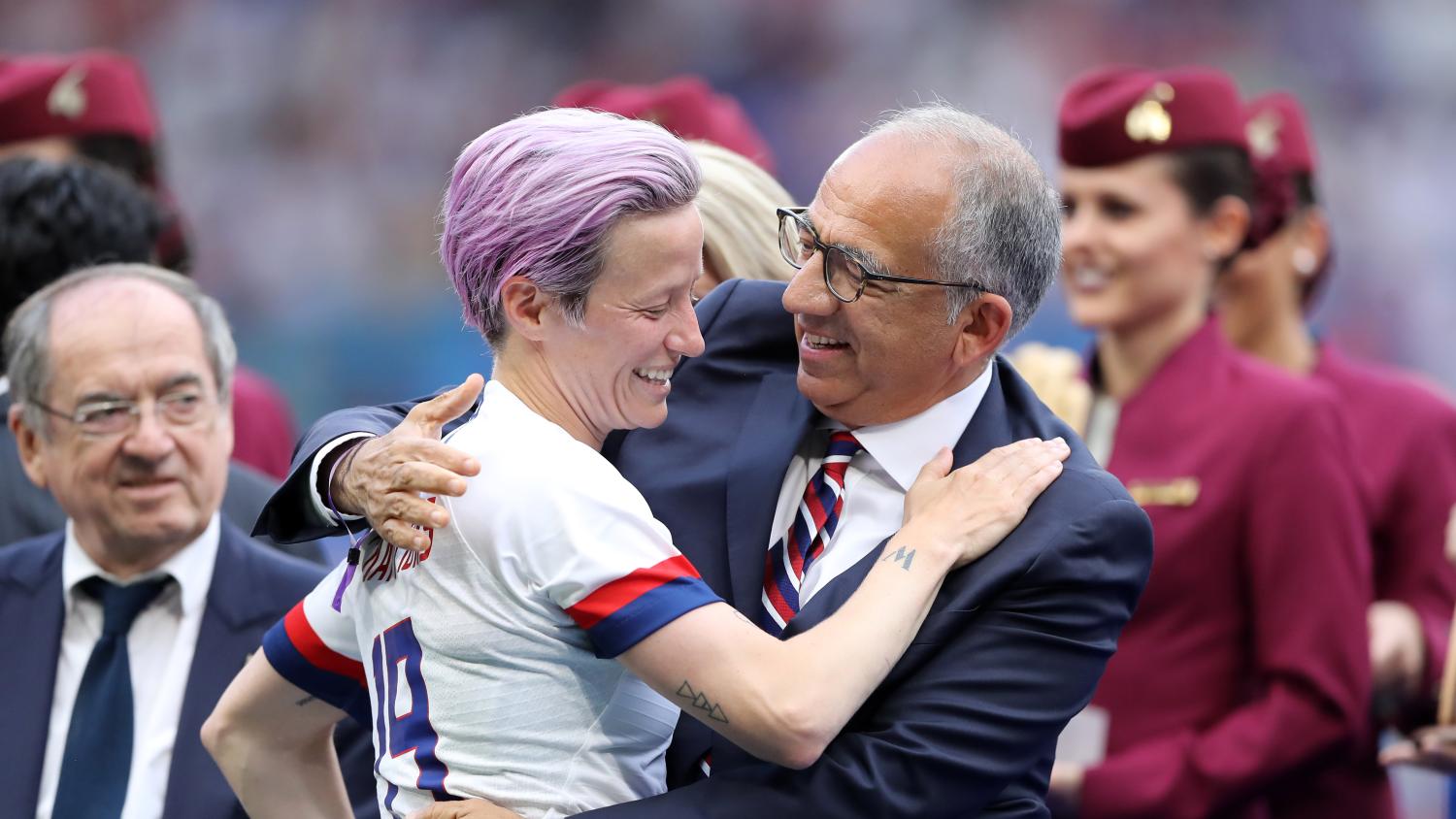 Carlos Cordeiro, the former U.S. Soccer Federation president who resigned in disgrace after overseeing some of the most deplorable arguments the USSF has ever put forward in a lawsuit, wants his old job back. Megan Rapinoe, for one, has made her opinion known on the matter.

Cordeiro was elected USSF president in 2018, which I wrote at the time was a vote against major change in the federation. The former Goldman Sachs executive lasted just 25 months on the job, resigning in March 2020. On Wednesday, he launched a new website announcing his decision to run for USSF president once again. The move was first reported by ESPN Tuesday before it was officially announced.

Exclusive: Carlos Cordeiro was forced to resign as US Soccer president amid backlash from his handling of the #USWNT's equal pay lawsuit. Now, sources say some of USSF's membership wants him back, and I'm told he's planning to run: https://t.co/wMTvCzOkhy (with @JeffreyCarlisle)

Cordeiro resigned amid shocking revelations that the U.S. Soccer Federation was using sexist and misogynistic arguments to excuse the federation’s refusal to treat the USWNT as well as the USMNT. The USSF claimed in court the men deserve to be paid more because men are superior to women.

It’s hard to fathom a more insulting argument in court, so it was to great relief among USWNT fans that Cordeiro resigned in 2020. It seemed he was done with soccer, but now he wants back in, claiming members of the USSF have asked him to run for president.

“In our lives, we can always learn from the past and do better in the future,” Cordeiro wrote on his new campaign website. “Going forward, one of the things that I resolve to do better is to listen more closely to the perspectives and aspirations of our women’s national team players and be a better partner in their work for equality.”

The deadline to file to run for U.S. Soccer Federation president was 1 a.m. ET Wednesday. The elections will be held in March in Atlanta, where Cordeiro will run against his former president Cindy Parlow Cone, who became the first female USSF president when Cordeiro resigned.

Cordeiro continues to claim he did not know his federation’s legal team was making sexist arguments in court, blaming the oversight team that did not bring it to his attention. Cone was reportedly on that oversight team.

Reports have suggested many of the USSF’s old guard are unhappy with Cone’s presidency, but it’s hard to imagine the federation moving forward by going back to the president who oversaw such blatant sexism. As such, it was no surprise to see how USWNT superstar Megan Rapinoe felt about the news, calling out “caveman levels of misogyny.”

“…after resigning under pressure” or resigned bc he embarrassed everything and everyone with caveman levels of misogyny? https://t.co/nD9PTPUCRH

The response was similar throughout the women’s soccer world on Wednesday.

The NWSL has already been through a lot in the last 15 months, with a long list of coaches and executives having resigned or been fired for their roles in allegedly abusing or harassing players. Most recent to sneak out the back door was Chicago Red Stars coach Rory Dames, who was allowed to continue to allegedly abuse players because Cordeiro never took action against him while president.

In the NWSL abuse scandal, US Soccer has emphasized its "entirely new leadership"

But now Carlos Cordeiro, who was in charge of USSF when it investigated and failed to take action against Rory Dames, is running for president of US Soccer againhttps://t.co/mQc6UmEQvL

Given all the shit U.S. Soccer has put women through over the past decade — remember it was the USSF that ran the NWSL while most of these alleged abuses took place, not to mention defending the indefensible in court — it’s incredible to see Cordeiro back in the running for USSF president. The fact there are people who want him back tells you how much rot is still in the federation. Imagine if President Richard Nixon ran for reelection in 1976 after resigning in 1974.

I can’t say for certain whether Cone is the best choice for USSF president, but I do know she’ll be better than Cordeiro by simple virtue of not being a sexist, misogynistic president. At the very least, U.S. Soccer needs a president who can pronounce Megan Rapinoe’s name correctly, and that’s not Cordeiro.

Megan Rapinoe isn’t alone in opposing Cordeiro’s presidency, but the deck may already be stacked in his favor. Back in 2018, six new-blood candidates ran against Cordeiro and Kathy Carter — the establishment picks — to replace Sunil Gulati as USSF president. Cordeiro and Carter ran away with the vote given how it was weighted. The same could happen in March, though changes have been made to give players more representation.

Given everything that’s at stake, the 2022 USSF presidential election is massive for soccer in the U.S. The USWNT and USMNT still need to work out equitable pay structures, the NWSL needs proper oversight to get rid of the numerous abusive coaches and oh by the way the nation is co-hosting the men’s World Cup in four years. If you ask me, at a time when the USSF should be looking forward, bringing back a man who oversaw some of the federation’s darkest moments from the past seems like a step backwards.