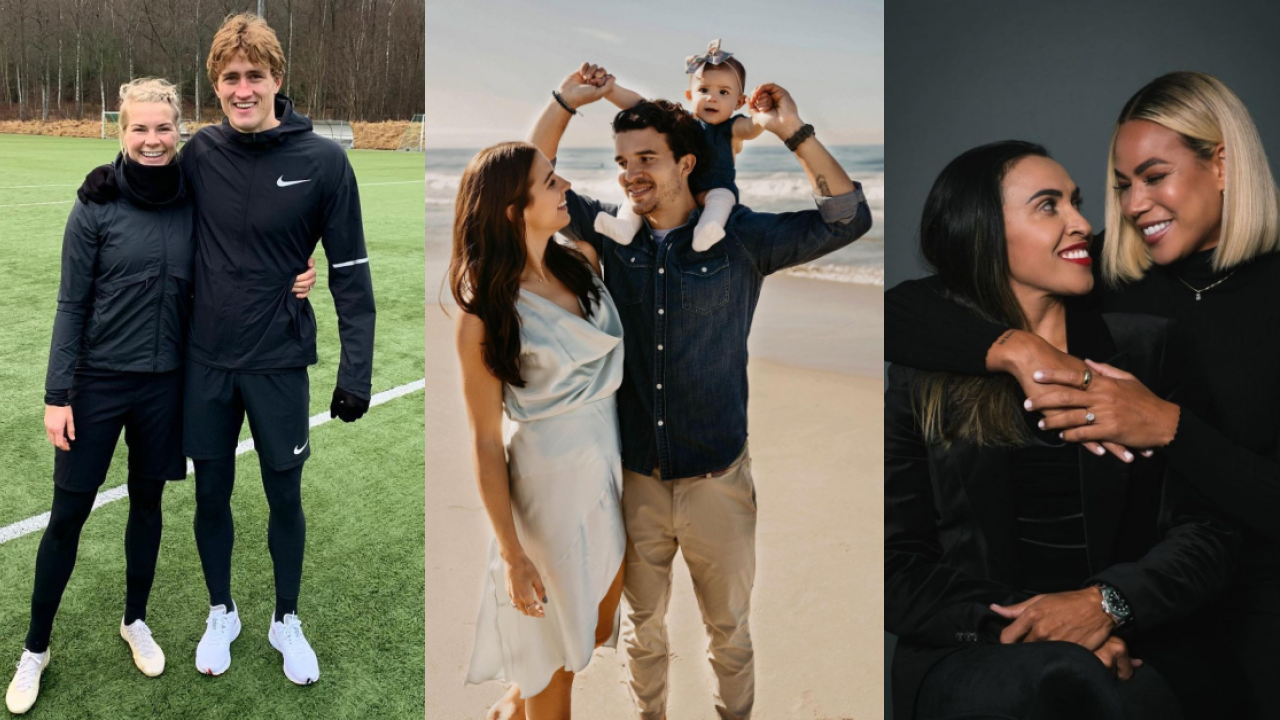 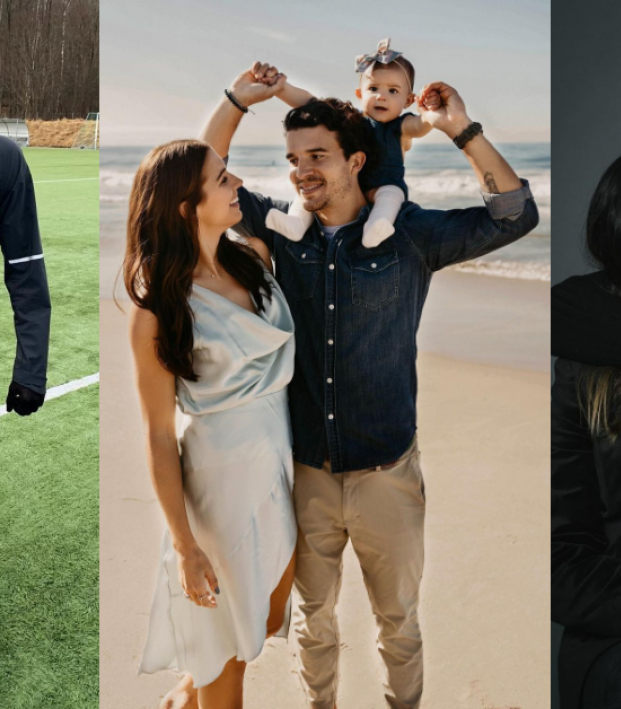 As much as we at The18 love women’s soccer, it’s a sad fact that the men’s game receives far more attention, whether it’s from FIFA, other media companies, potential sponsors or the fans themselves. (We could spend hours debating why this is the case, but that’s for another story.) Despite this, there are still a large number of women’s footballers who are far more famous than their partners, who are themselves professional soccer players.

10 Famous Football Couples Where A Woman is The Superior Footballer

Every soccer fan knows who Alex Morgan is. Only the biggest soccer fans know who Servando Carrasco is. Carrasco has bounced around clubs in MLS (he has over 150 appearances in the league) and last played for Fort Lauderdale CF in USL League One (he’s currently without a club).

Morgan, meanwhile, has won two World Cups, a Champions League and an Olympic gold medal. She’s basically the face of soccer in the U.S. and has been for about a decade. Oh, and she’s still kicking ass after giving birth to the couple’s first child last year.

Hegerberg is arguably the most fearsome striker in world football right now. The 2018 Ballon d’Or winner has been monstrous with Lyon, scoring at an incredible rate of well over a goal per game while winning five Champions Leagues titles. She became the face of Nike soccer with a 10-year deal last summer. Hegerberg also decided to quit the Norwegian national team to protest the way women’s soccer is treated in her home country.

Her husband is also a footballer but of much less notoriety. Hegerberg married Thomas Rogne in 2019, a center back who has two caps for Norway and has also played for Stabæk, Celtic, Wigan, IFK Göteborg and Lech Poznan.

Martens is one of the most popular footballers in Europe, having helped the Netherlands win the 2017 Euros. She is romantically involved with Benjamin van Leer, a goalkeeper who has bounced around the Eredivisie.

While Martens has appeared 120 times for the Netherlands — scoring 48 goals and leading the Dutch to the 2017 Euro title — van Leer has never appeared for his country.

There is perhaps no more American couple in soccer than Sydney Leroux and Dom Dwyer. Both have scored for their respective United States national teams despite neither actually having been born in the U.S. Leroux was born in Canada to a Canadian mother and American father. Dwyer was born in England and became a U.S. citizen after initially coming to the states to play at Tyler Junior College.

While Dwyer has had a solid career in MLS, it’s nowhere near the level of Leroux, who has scored 35 times in 77 appearances for the USWNT, highlighted by winning the 2015 Women’s World Cup in the country of her birth.

We can’t ignore same-sex couples on this list. While we’re not going to decide whether Ali Krieger or Ashlyn Harris is better, even Marta’s fiancée would admit who the better partner is in their relationship.

Marta became engaged to Orlando Pride teammate Toni Pressley in January. The two have 17 World Cup goals between them — all by record-holder Marta. The Brazilian is arguably the greatest individual footballer of all time, though her team success hasn’t quite equaled her level outside of a few domestic titles.

Pressley has had a solid pro career but has never broken through at the international level, having only appeared for USWNT youth squads. In comparison, Marta has over 100 international goals for Brazil.

One of England’s greatest center backs of all time, Houghton married fullback Stephen Darby in 2018.

Houghton has over 120 caps for England and has been a stalwart in the Women’s Super League with Arsenal and Manchester City. Darby spent most of his career at Bradford City, but also made one appearance for Liverpool and three for Bolton. He made two caps for England’s U-19 team but never made it on the senior squad.

Sadly, Darby’s career was cut short at 29 after he was diagnosed with a neurodegenerative neuromuscular disease.

Julie Foudy played in four World Cups, winning two of them, and claimed two Olympic gold medals. She’s almost as famous for her life after her playing days, whether it’s working in sports media or in activism.

Her husband, Ian Sawyers, is also a footballer, known more for his coaching than playing abilities. Sawyers played at Rotherham United in England before coming to the States where he’s coached Stanford’s women’s team and a variety of pro and semi-pro clubs, including a stint at Sky Blue FC.

Dahlkemper is one of the top center backs in the world right now, having helped the USWNT win the 2019 Women’s World Cup and winning two NWSL titles with the Courage. She moved to Manchester City at the start of 2021 aiming for a new challenge.

Her husband, Aaron Schoenfeld, has played professionally in the U.S. and Israel. The forward joined expansion club Austin FC in 2021.

Allie Long has won it all: NCAA championships, NWSL titles and the Women’s World Cup. Her trophy case is truly impressive.

Her husband, Jose Batista, hasn’t had quite the same career, but did play professionally. He played college ball at Molloy College and bounced around the lower levels of the U.S. soccer pyramid. He featured in a documentary called “Going Pro: American Soccer,” which followed players on the semi-pro Brooklyn Knights of the PDL.

OK, this last one isn’t quite in line with the rest of these athletes because her partner didn’t play soccer, but Mia Hamm is indisputably the more accomplished athlete in her household, despite some stiff competition.

Hamm is one of the top soccer players of all time, winning four NCAA titles, two World Cups and two Olympic gold medals. When she retired, she was the world’s highest-scoring international player.

Her husband, Nomar Garciaparra, was a pretty good athlete in his day too. The shortstop had a stellar career in MLB, mostly with the Boston Red Sox, who inducted him into the team’s Hall of Fame. The six-time All-Star was traded from Boston in 2004, just before the Red Sox ended their World Series drought. The move meant Garciaparra never did win a championship in baseball, unlike his wife, who won basically everything in soccer multiple times.

Similarly, Julie Ertz is more accomplished than her Super Bowl-winning husband Zach Ertz, Carli Lloyd is way more famous than her golf-playing husband Brian Hollins, Mal Pugh has already accomplished more than her MLB boyfriend Dansby Swanson, Lauren Holiday has a World Cup to her name while husband Jrue Holiday has yet to win an NBA title and the same can be said about Heather Mitts and her NFL quarterback husband A.J. Feeley. To go in another direction, tennis star Sloane Stephens has done more than partner Jozy Altidore.

Finally, one soccer relationship where both players are absolute mega-stars is Megan Rapinoe and Sue Bird. Rapinoe is a two-time World Cup champion and won just about every individual award in 2019. Bird is a basketball legend who has won four WNBA titles, five Russian league championships, two NCAA titles and an incredible four Olympic gold medals, three more than her partner. Similarly, Chelsea teammates Pernille Harder and Magdalena Eriksson are equally accomplished footballers.