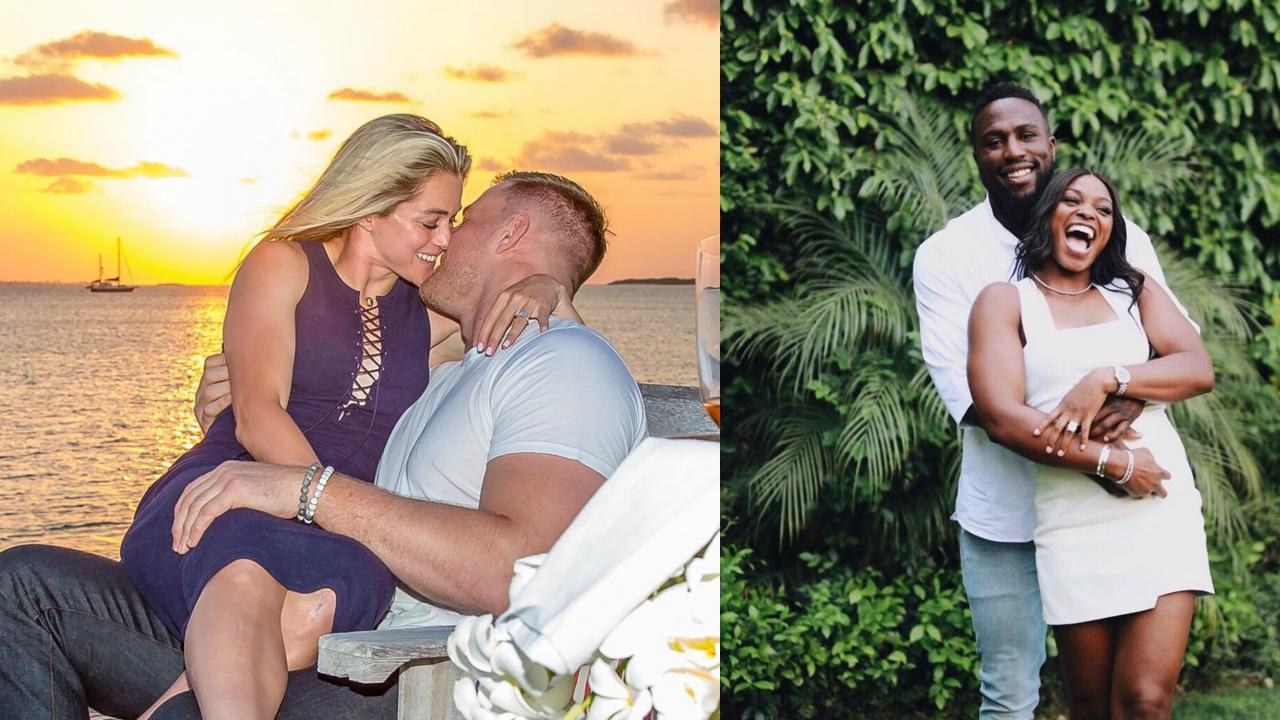 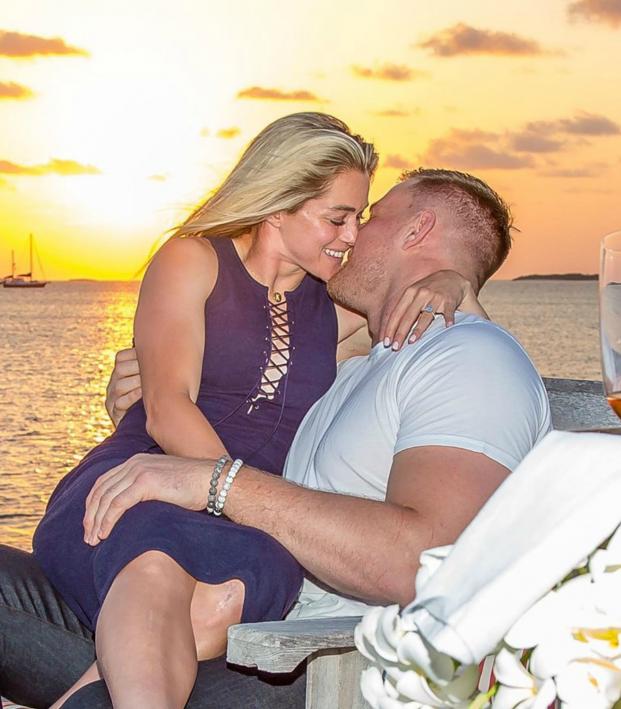 The 10 Hottest Cross-Sport Couples In Soccer

Athletes are a different breed. They work their bodies to their physical peak with relentless training, feed themselves only the most nutritious food and have a competitive edge few can match. So it’s no surprise there are a number of famous cross-sport couples, especially in the world of soccer.

True love knows no boundaries, whether that’s a soccer pitch, basketball court or football field. These soccer stars making up the 10 hottest cross-sport couples know they want a fit partner. But unlike our previous list of the 10 hottest soccer couples, these players aren’t restricting themselves to fellow footballers to find the one.

We hope these 10 hottest cross-sport couples in 2019 stay together for the long run, if only to give us fitspiration to be half as good looking as they are.

Still can’t believe I get to be with you forever. I love you @jjwatt

J.J. Watt, the popular Houston Texans defensive end, and Kealia Ohai, captain of the Houston Dash, got engaged in May of 2019 to cement their status as the premier celebrity couple in Houston. Just kidding, that’s still Beyoncé and Jay-Z, but these guys aren’t far behind.

Ohai scored the game-winner in the U-20 World Cup in 2012 and though she has just three senior national team caps, the former North Carolina Tar Heel is one of the Dash’s most popular players. Watt has been named NFL Defensive Player of the Year three times while also winning the Walter Payton NFL Man of the Year and Sports Illustrated’s Sportsman of the Year in 2017 for his charity work after Hurricane Harvey struck Houston.

I’m so in love with you. Thank you baby @sbird10

There might never be a more legendary cross-sport couple.

Megan Rapinoe won the Golden Boot and Golden Ball at the 2019 Women’s World Cup, leading the USWNT to a second straight world championship. Sue Bird is only one of the most winningest women’s basketball players of all time.

Bird and Rapinoe began dating in 2017 and the following year became the first same-sex couple to grace the cover of ESPN The Magazine’s Body Issue.

th wedding anniversary,  years together. With you @annalewandowskahpba I am the happiest man in the world

Robert Lewandowski is a prolific scorer in the Bundesliga, first with Borussia Dortmund and now with Bayern Munich, winning the league’s Golden Boot four times. Anna Lewandowska won a medal at the 2009 Karate Cup and is now a professional nutritionist who clearly keeps her husband in great shape.

Robert and Anna married in 2013 and have a 2-year-old daughter together.

These two just sizzle together. They started dating in 2017, and earlier this year, Jozy proposed and she said yes.

Jozy Altidore is the USMNT’s third all-time leading goal scorer, trailing only legends Clint Dempsey and Landon Donovan. Sloane Stephens won the 2017 U.S. Open and has been ranked as highly as the third-best tennis player in the world.

Both still young, expect plenty more from these two.

What a lovely day with my wife @anaivanovic, where is your favorite park?

A post shared by Bastian Schweinsteiger (@bastianschweinsteiger) on Jul 8, 2019 at 2:32pm PDT

Bastian and Ana are an adorable couple who always look happy together. They got married in 2016 and probably haven’t stopped smiling since.

Schweinsteiger is a World Cup winner with Germany. Before playing with the Chicago Fire, he won titles with Bayern Munich and an FA Cup with Manchester United.

Ivanovic won the 2008 French Open, reaching No. 1 in the world at the time, though she’s now retired and gave birth to the couple’s first child in 2018.

Sports legends seem to gravitate toward one another.

Mia Hamm is one of the greatest soccer players of all time, scoring 158 goals for the USWNT and winning two Women’s World Cup titles and two Olympic gold medals.

Nomar Garciaparra was a six-time MLB All-Star who played for the Boston Red Sox, Chicago Cubs, LA Dodgers and Oakland Athletics before hanging up his cleats in 2009.

The couple married in 2003 and have twin daughters and a son, who hopefully play soccer instead of baseball.

My number 1 fan. The amount of sacrifices to get here makes it all worth it to share moments like this. Not done yet. We go again.

Probably the physically strongest duo on this list of cross-sport couples. Zach plays in the NFL for the Philadelphia Eagles, but Julie probably has a stronger tackle, playing defensive midfield for the USWNT and Chicago Red Stars.

The two met at a Stanford baseball game, where Zach was a student-athlete, in 2012. Four years later, Zach proposed at the same stadium and they married in 2017.

Of all the cross-sport couples on this list, they might be the most fun to hang out with, because they love to play video games and eat breakfast for dinner.

With every year I admire you even more. You are the definition of selfless. Your heart is so generous and intentional. I love you forever. Happy Birthday!!

Lauren and Jrue were both student-athletes at UCLA, where they first met. Lauren (Cheney at the time) initially went up to Jrue asking for an autograph thinking he was another basketball player, Darren Collison. Lauren told him he was cuter than Darren and eventually they began dating and married in 2013.

Lauren was a member of the 2015 Women’s World Cup champions and scored 24 goals for the USWNT before retiring in 2015. Jrue is still playing in the NBA. The former McDonald’s All-American and NBA All-Star is currently a guard for the New Orleans Pelicans, perhaps the only team in the NBA with a worse name than any club in MLS.

If you’re gonna marry an NFL player, you may as well marry the quarterback. That’s exactly what former USWNT star Heather Mitts (now Freeley) did in 2010.

Heather made 137 appearances for the USWNT, winning three Olympic gold medals as a defender. She became one of the most well-known faces in women’s soccer, working for ESPN as an analyst and sideline reporter. A.J. had a 10-year NFL career, though much of it was spent as a backup (the best position in all of sports).

The couple married in 2010 and they have three kids together.

I crave a love that adds value to my life. I don’t want a relationship, I want a partnership. Someone to aid me up the mountain of life and guide me through the valleys of adversity. Someone who is able to breathe in sync and dance by my side through thick and thin. I want that grind-together kind of love, with a best friend I can build an empire beside. -Tene Edwards Happy 2 year anniversary love!  See you soon

Carli Lloyd is one of the most popular USWNT players of the last decade, in large part because of her unreal performance at the 2015 Women’s World Cup. She scored a hat trick in the final and won the Golden Ball as the tournament’s best player and was later named Best FIFA Women’s Player in 2016. Brian Hollins is a golfer on the PGA Tour. Not quite as decorated, but he’s probably accomplished more than you.

Carli and Brian were high school sweethearts and married in 2016 after decades of dating.