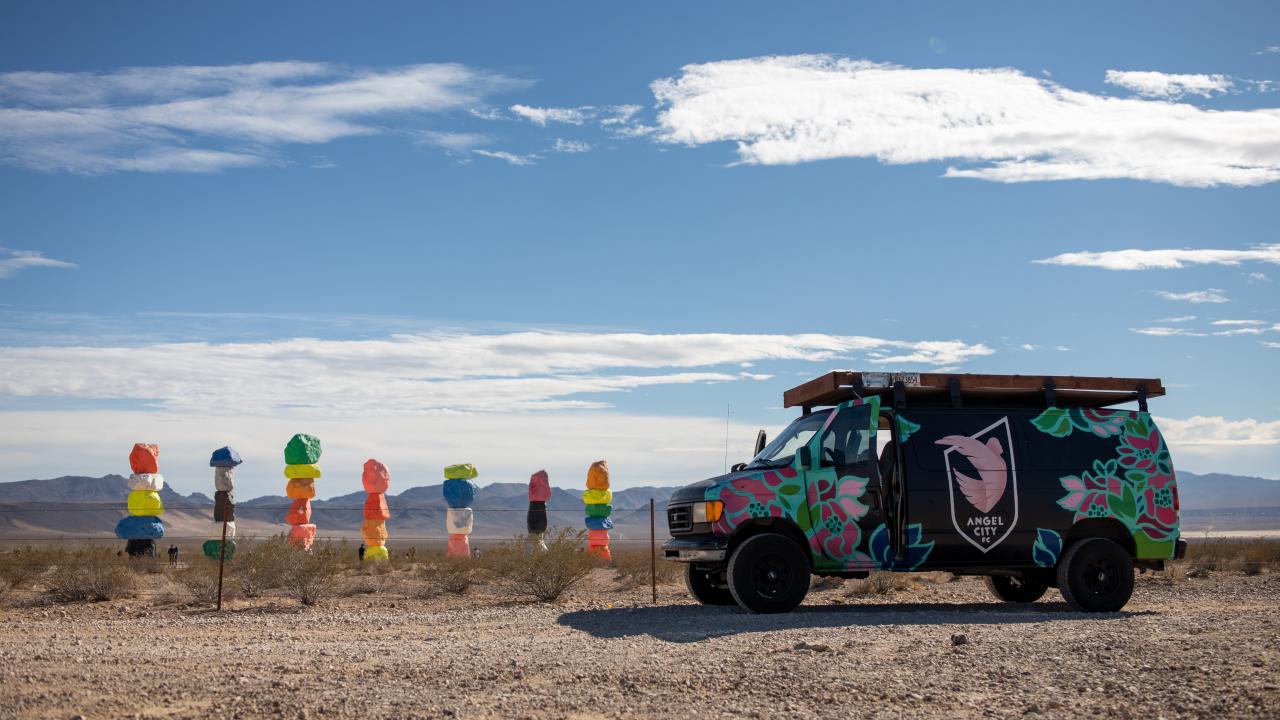 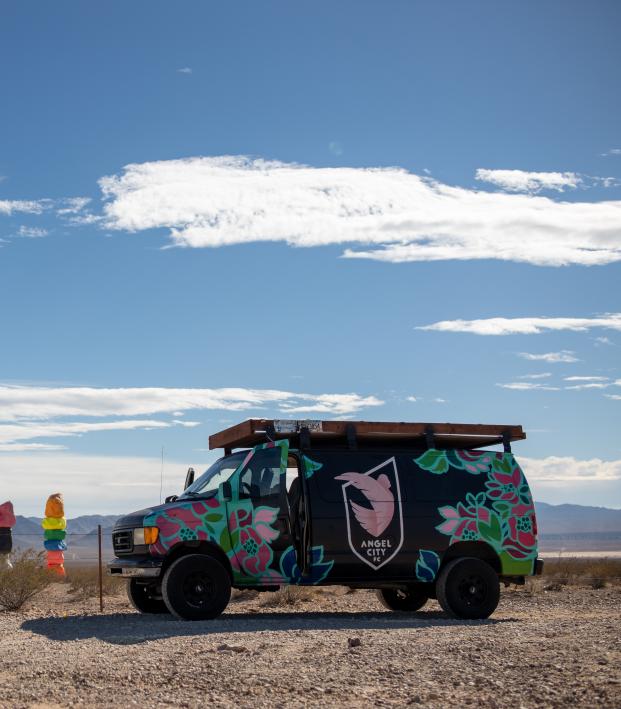 From the first day it was officially announced Los Angeles would be getting an NWSL expansion team, Angel City FC has done things differently. From the star-studded cast of owners and investors to the commitment to community, Angel City has already made more headlines before playing a single match than some NWSL clubs that have been around for years.

So maybe we shouldn’t be surprised that ahead of the last NWSL Championship game before ACFC joins the league, the new kids on the block are planning to make a splash at the final in Louisville, Kentucky.

Despite having yet to officially join the league, Angel City FC plans to have a strong contingent of about 170 ACFC staff, members and fans at the NWSL Championship on Saturday, including president Julie Uhrman and head coach Freya Coombe. Leading the way for that group is an Angel City road trip across the country. Three members of the club’s community team — plus one dog — have traveled from Los Angeles to Louisville in an unmistakable icon of ACFC, a beautifully painted van named Jade.

“We don’t have a team in this tournament or this final, but we thought it was very important to show up as a women’s soccer community, that we’re here to stay and vested and support the players and the league,” said Megan Fish, keeper of culture for ACFC. “Flying would have been an easier route for sure, but we would’ve missed a lot of stops with family along the way, pieces we want to stay connected to.”

Fish, Catherine Dávila, Matt Gulley and Pacha, a cattle dog-Doberman mix, all piled into Jade on Tuesday morning to embark on a 37-hour drive to attend this year’s NWSL final showdown between the Chicago Red Stars and Washington Spirit.

Along the way, they’ve stopped at various locations of importance to women’s soccer, including disembarking from the Rose Bowl, site of the iconic Women’s World Cup final win over China in 1999. All the while, the team is sharing the journey on social media (@acfcstreet, @weareangelcity).

Given the glut of soccer expansion teams in the U.S. over the last two decades, you’d be forgiven for overlooking yet another club entering the fray. MLS is set to nearly triple in less than 20 years. The NWSL will have a U.S. women’s professional soccer record of 12 teams in 2022.

In the past, some American expansion teams have quietly entered their respective leagues and quickly gone about the duties of being awful (looking at you, FC Cincinnati). Even in the NWSL, there remain clubs who don’t seem to put much effort into being a part of their communities.

Angel City doesn’t want to be just another team in an increasingly cluttered soccer landscape, and it isn’t sitting around waiting to actually have a team to become a part of its community.

What makes Angel City different is its devotion to community, from its commitment to being women owned to its desire to be a leader in women’s sports.

“We’re a brand on a mission to make a difference in this world,” the ACFC website boasts. “We’re born of the streets of Los Angeles and we stand side-by-side with our community. Football is our passion and the vehicle through which we speak to our community and passionate followers. Our active purpose is our north star guiding us all to strive for better in everything we do. It unites us all as we soar higher together each and every day.”

Nowhere is this more apparent than in Jade, a customized van as much a part of the Angel City community as anyone else. Designed by the artist Ms. Yellow but having involved the entire ACFC community, Jade represents the club’s close link to its fans and the city of LA.

“She’s a mascot, a person in our community and our team,” Fish said of Jade. “Everyone in our fanbase loves her, loves taking pictures of her. I think it’s been helpful in the story telling of this.”

Jade and Co. left Los Angeles on a pleasant November morning and quickly ran into their first road trip experience: a cold front. From highs in the 80s to a frigid 28 degrees in Salt Lake City, Pacha the dog suddenly became everyone’s favorite source of heat on the road.

Nonetheless, the team persisted, stopping at the former home of the Utah Royals. That team left town after allegations of owner Dell Loy Hansen being racist, plus coach Craig Harrington was fired over allegations of creating a toxic environment.

Though some might want to ignore that part of the NWSL’s history, Angel City makes it a point to remember those who came before them, including the now-defunct WUSA and WPS.

From Utah, the ACFC team traveled to Denver, stopping in the suburb of Superior to meet up with players from the Broomfield Girls Academy, a local club.

In an event organized in about a day thanks to a young fan who reached out on social media, Fish and Dávila talked about life and soccer with the youngsters before playing a little soccer with them, despite the weather still being quite cold.

Then the crew went full circle from Utah, stopping in Kansas City, the new location of the club formerly known as the Utah Royals. The Kansas City Current have shown how quickly women’s soccer can rebound, going from non-existent to a thriving fanbase in less than a year thanks to a motivated ownership group, including former soccer player Brittany Matthews.

On Thursday night, the KC Current had about 120 fans out at a local brewery in Kansas City, Missouri, to meet up with the Angel City contingent and bond over the shared love for soccer.

“It showed us how amazing our whole soccer community is, and hopefully we can do this one day in every state and stop to see NWSL fans,” Fish said. “We went through a really heavy time with this league. This whole journey has got us more hopeful about where we’re going and the community.”

The last leg of the journey includes a few parties in Louisville on Friday night before the NWSL Championship on Saturday (noon ET kickoff on CBS). Before that, Angel City is hosting an Instagram Live event with one of the greatest women's soccer players of all time: Michelle Akers. The event will happen at 6 p.m. ET Friday on the @weareangelcity Instagram account, on the 30th anniversary of Akers scoring one of her record 10 goals in a 5-0 win over Brazil at the first Women’s World Cup.

The FIFA Female Player of the Century currently runs a horse rescue and Angel City is giving her a platform to talk about the needs of the Michelle Akers Horse Rescue and Outreach Foundation. In the past, Akers, who has fought off rabid bobcats to protect her horses, has had to sell off her World Cup and Olympic medals to raise money for the foundation. (You can donate to the horse rescue here, and if anyone deserves help, it’s Akers.)

“(She is) the one legend who started it all for us and really was a part of laying the foundation for everyone to pick up and run with and be inspired by,” Fish said.

On Saturday, nearly 200 Angel City supporters will let their voices be heard at Lynn Family Stadium as a new NWSL champion is crowned. And no one will have experienced the beauty of women’s soccer in this country better than the group who traveled cross country in Jade, spreading the good news of Angel City, a club that will fully explode onto the scene in 2022.

“We’re about connecting with people and connecting with the story around the game,” Fish said. “And there’s no better way to do that then to drive a stop and experiencing every piece of the journey.”