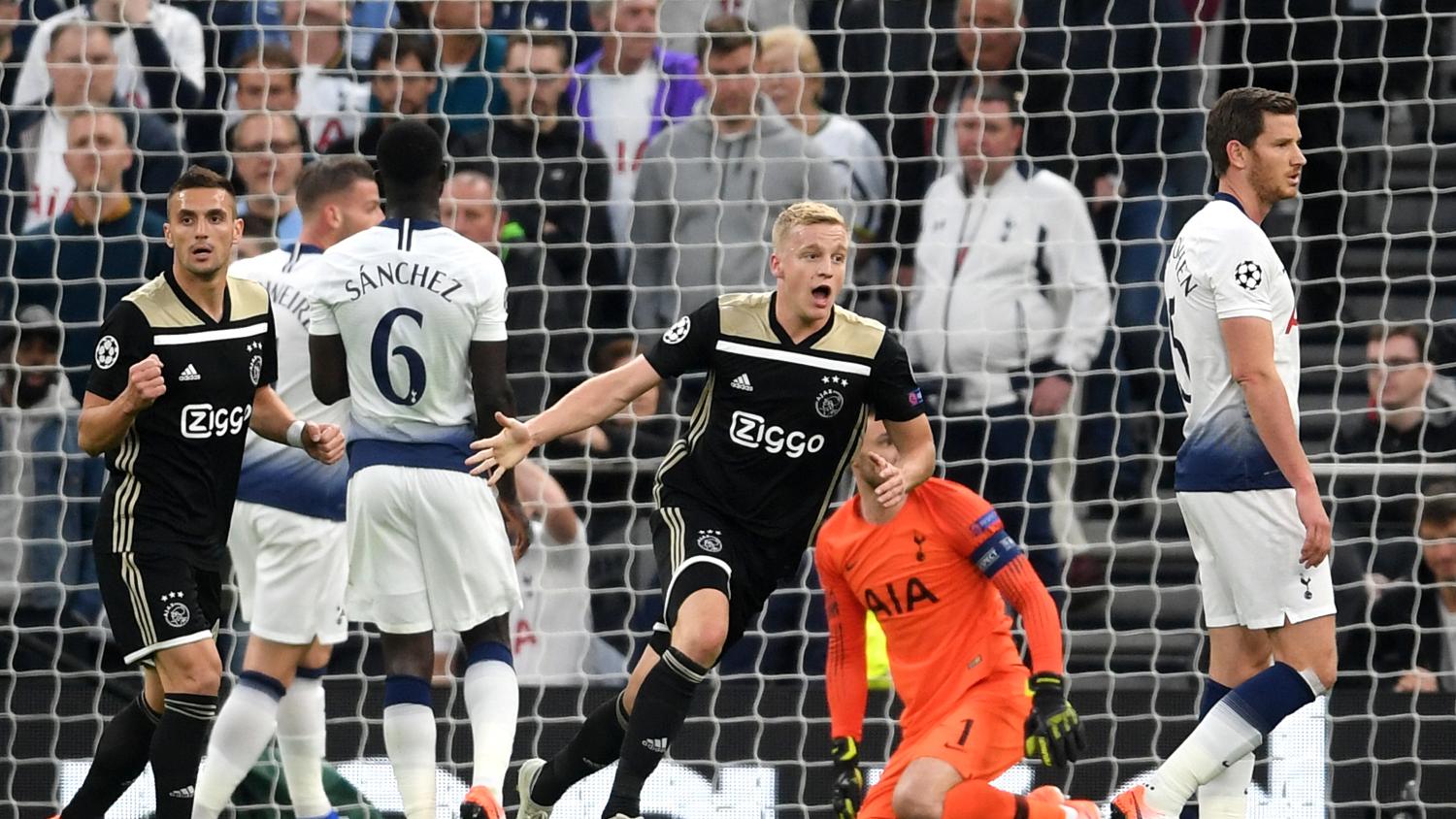 Ajax took a big step toward reaching the Champions League final with a 1-0 win in leg one against Tottenham.
Getty Images

Forget all the complaints about which team had more rest or which team has more money — the first leg of the Champions League semifinals between Ajax and Tottenham was everything you want in a big match.

Full of attacking intent from both sides, neither of which backed away from a single challenge, Ajax turned 30 minutes of first-half dominance into a 1-0 victory, a third-straight away win in the knockout rounds for the Amsterdam side. Spurs, meanwhile, suffered back-to-back defeats at the new Tottenham Hotspur Stadium in London.

There were great chances, last-ditch tackles and some sturdy goalkeeping; there was end-to-end action in what was widely billed as the undercard of the two Champions League semifinal matches.

And it will probably be better than the first leg between Barcelona and Liverpool on Wednesday.

For the first minute, the match had the feel of a 12-13 second-round matchup in the NCAA tournament, both sides playing with house money as no one really expected either team to make it this far. But things soon looked like a 1-16 matchup, Ajax the No. 1 seed.

The opening 30 minutes alone were worthy of a place in the final for Ajax, which deserved every bit of its victory. The Dutch club showed it has steel on defense as well, holding off an inspired Tottenham in the second half as the home side pushed Ajax more than Real Madrid or Juventus managed at home.

Once again Ajax showed it was undaunted by playing a big away game. Ajax won 4-1 at the Bernabeu in Madrid and 2-1 at Allianz Stadium in Turin to oust Real Madrid and Juventus, respectively.

Now Erik ten Hag’s men will be in an unusual position heading into the second leg, protecting a lead at home instead of chasing the lead on the road.

They have the lead thanks to Donny van de Beek, who ended 15 minutes of pure and utter domination from the visitors with a well-taken goal, given an eternity to shoot after he was played in by Hakim Ziyech.

Both sides had chances go begging in the second half, perhaps none bigger than when David Neres struck the post in the 78th minute.

Of course, Tottenham was playing without a number of key players. Harry Kane is out injured, probably for the rest of the year. Son Heung-min was suspended after picking up a yellow card in the wild the quarterfinal second leg against Manchester City; he reportedly didn’t realize a yellow card would keep him out of Tuesday’s first leg. And Jan Vertonghen suffered a nasty head injury, forcing him out in the 39th minute.

Tottenham was better after Vertonghen was replaced by Moussa Sissoko, who brought energy and control to the Spurs midfield. The Frenchman is likely to start in the return leg next Wednesday.

The entire match was played at a breakneck pace. It will be interesting to see if Liverpool’s trip to the Camp Nou can replicate the same verve shown by Spurs and Ajax.

Barcelona will be wary of Liverpool’s offensive prowess, especially on the counter, and may opt for a strategy that limits risk. Liverpool will likewise be wary of Lionel Messi and his cohorts, who are capable of ripping a defense to shreds at any given moment, the Reds not wanting to go back to Anfield with the semifinal already decided.

But we won’t mind if Wednesday’s match proves to be every bit as entertaining as Tuesday’s. And we can’t wait to see what’s in store for the second legs.