Pulisic Becomes First U.S. Male To Play In, Win Champions League Final — And Look What It Means To Him

Travis Yoesting May 29, 2021
The man with the bald-eagle tattoo has done something no USMNT player has ever done.

Christian Pulisic became the first American male to appear in a Champions League Final. Not long later, he became the first USMNT player to lift the big-eared trophy after participating in the final, helping Chelsea over the line in a 1-0 defeat of Manchester City in a tight, edgy affair on Saturday at Estádio do Dragão in Porto, Portugal.

Pulisic, the 22-year-old born in Hershey, Pennsylvania, came off the bench as a 66th-minute substitute to make history and delight U.S. fans across the country. While nine American women have appeared in Champions League finals, including three winners, no USMNT player had ever accomplished the feat. Zack Steffen, another American involved in Saturday’s final, was an unused sub as Manchester City’s backup goalkeeper.

The miss didn’t cost Chelsea as the Blues held firm defensively, N’Golo Kanté playing masterfully in midfield to inspire the back seven to a clean sheet against one of the best offenses in the world (aided by some superb time wasting by Tuchel’s men).

After seven tetchy minutes of extra time, the referee’s final whistle was met with jubilation from the Chelsea faithful, who couldn’t have imagined reaching such heights after Frank Lampard was fired as coach in January. For Tuchel, it was sweet redemption after he lost the 2020 Champions League Final with PSG.

The only other American male to win a Champions League title was Jovan Kirovski in 1997 with Borussia Dortmund, though he wasn’t even on the bench for the final.

“I can’t explain it,” Pulisic said after the match. “It’s just incredible. I have no words; I’m so proud.”

Relying on a False Nine works wonders — until it doesn’t. Not starting a defensive midfielder is crafty — until you’re forced to defend. Being seen as the best coach in the world is great — until you again fail to win the Champions League.

Manchester City, so brilliant all season, failed to bring home the long-coveted Champions League trophy. Pep Guardiola was perhaps too smart for his own good with tweaks to his lineup that no doubt helped Chelsea claim the unforgettable 1-0 victory.

Guardiola opted against playing a striker or a defensive midfielder in a lineup meant to pin back and break down Chelsea’s seven-man defense. On another day the starting XI may have masterfully brought European glory to the light-blue half of Manchester for the first time. On Saturday it brought nothing but second guessing.

As good as Manchester City’s star-studded roster is, on Saturday, Chelsea was just a touch sharper, quicker to loose balls and won nearly every 50-50 challenge. Kanté stopped countless attacks by poking the ball away with his tireless legs.

None of City’s wide attacking stars — Raheem Sterling, Riyad Mahrez, Phil Foden, Bernardo Silva — could find any sort of success going at Chelsea’s disciplined defense. The lack of a central striker was evident in City’s inability to find any end product offensively. More damning, the lack of a defensive midfielder led directly to the lone goal.

Shortly before halftime, Mason Mount looked up near midfield to see Kai Havertz streaking into acres of open space. Mount’s through ball was perfect, allowing Havertz rounded Ederson before scoring the match winner. You can’t help but think a player like Rodri or Fernandinho would have filled the massive hole in City’s defense to prevent such a simple goal.

Ederson was perhaps fortunate Havertz went on to score after the keeper handled the ball outside the box as Havertz sped by. Had Havertz missed, it’s likely Ederson would have been sent off for denial of an obvious goal-scoring opportunity, which could have meant a Champions League Final appearance for Steffen.

Things got worse for City 15 minutes into the second half when Kevin de Bruyne was forced off after a brutal challenge from Antonio Rüdiger left the Belgian’s left eye bruised and battered. Replaced by the capable Brazilian Gabriel Jesus, it still felt like a massive blow to City’s comeback hopes.

Kevin de Bruyne leaves the field in tears after being forced off injured. pic.twitter.com/5agWqA2nop

But just as City had to play without KDB, Chelsea lost its talismanic defender Thiago Silva, who was on Tuchel’s PSG side that lost to Bayern Munich in the UCL final last season, to injury in the 39th minute.

Ultimately, it was Chelsea that was the better team on Saturday. As the final whistle blew, Pulisic fell to his knees in elation. Later, he shared a heartfelt hug with Tuchel, who coached him for three years at Borussia Dortmund.

The moment Christian Pulisic became the first male American to play in and win a European Cup pic.twitter.com/XD7ahuTkiP 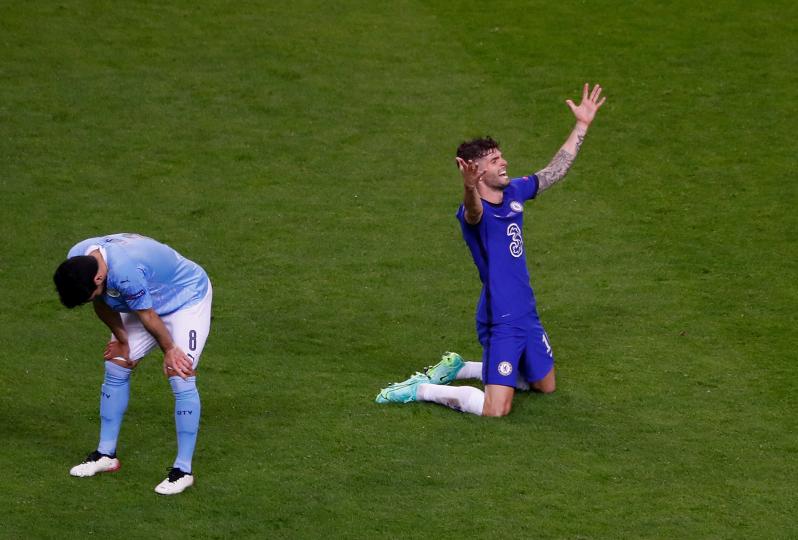 And then came the big moment American fans who dealt with audio issues throughout CBS’s broadcast had been waiting for: an American lifting the Champions League trophy. Pulisic was wearing a USMNT sweater around his neck during the trophy lift and donned it for the ensuing celebrations, another sign of how much the man with a bald-eagle tattoo loves his country. 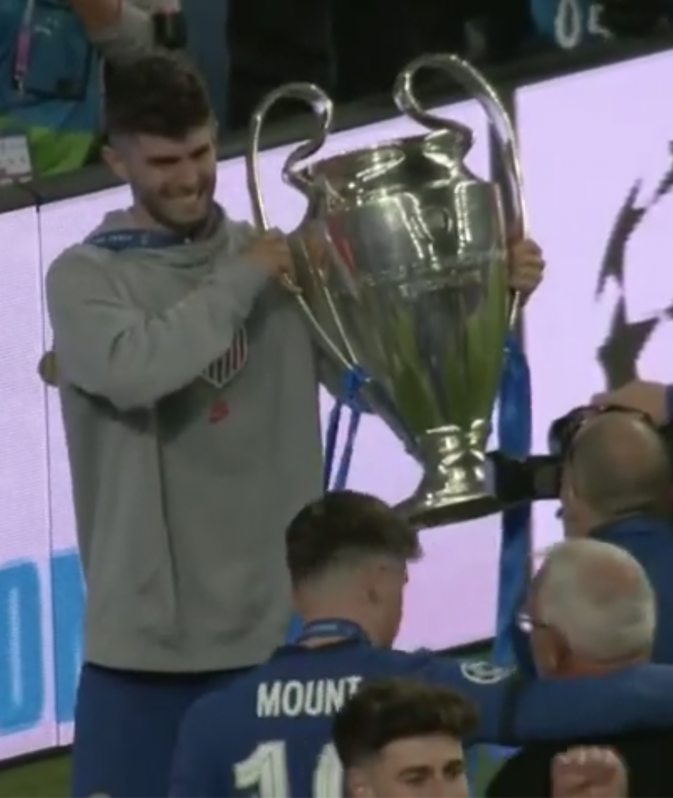