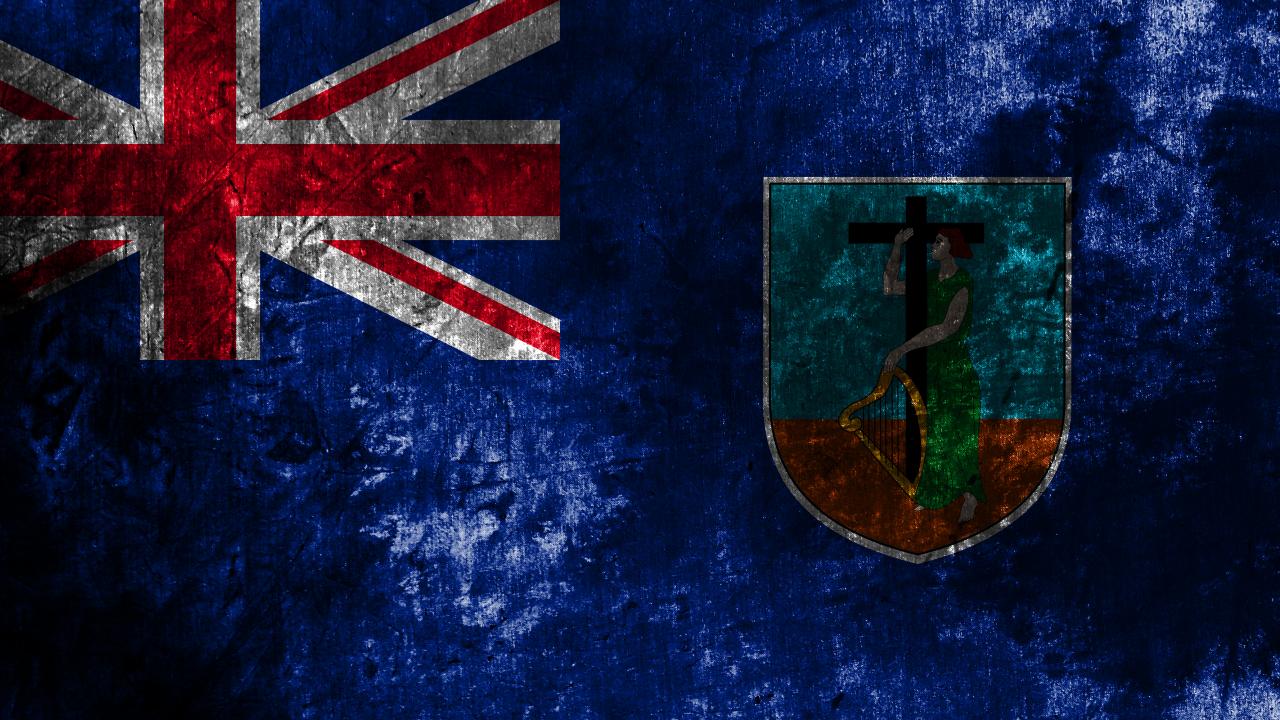 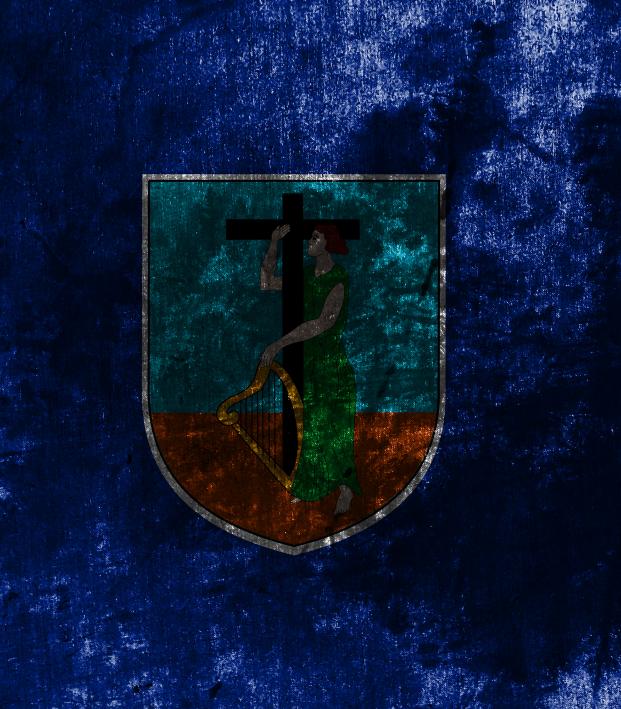 How A Country With A Population Under 5,000 Could Qualify For The 2019 Gold Cup

Travis Yoesting March 19, 2019
With a win Friday and a couple results in its favor, Montserrat could qualify for this summer’s Gold Cup.

Montserrat — a tiny Caribbean island of less than 40 square miles named by Christopher Columbus, a territory of fewer than 5,000 inhabitants that was wrecked by a volcano 24 years ago, with a team ranked No. 200 in the world — is one win away from qualifying for the 2019 Gold Cup.

Just 11 teams are ranked behind Montserrat in FIFA’s most recent ratings of its 211 member nations. This isn’t much of a surprise given the size of the British Overseas Territory, with a population of about 4,500. And yet, somehow, Montserrat has a strong chance of reaching the 2019 Gold Cup, Concacaf’s biennial championship.

Such an accomplishment would be nothing short of unbelievable considering the Emerald Boys have never even qualified for the Caribbean Cup, which usually serves as a qualifier for the Gold Cup. To date, Montserrat’s biggest accomplishment as a footballing nation was losing to Bhutan in “The Other Final” the day of the 2002 World Cup final, a matchup of the world’s two lowest-ranked teams.

How the Montserrat national team has gone from a complete afterthought to a potential contender to be among the final 16 teams in Concacaf’s biggest competition is a story of global football at peak FIFA zaniness.

In the past couple years, FIFA (and its subsidiary confederations) have embarked on a quest to make international football bigger (read: make more money). FIFA expanded the World Cup to 48 teams (confirmed for 2026, still in the works for 2022), UEFA kicked off the Nations League in the fall of 2018 and more than ever players are forging their own paths to represent national teams with only dubious connections.

Nowhere are these trends more evident than in Concacaf, the most bizarre confederation since Pete Davidson and Ariana Grande Kate Beckinsale.

The Confederation of North, Central American and Caribbean Association Football, as no one has fully spelled out since 1997, expanded the Gold Cup from 12 to 16 teams for the 2019 edition and is in the midst of qualifying for the first Concacaf Nations League. And nowhere do football associations try to bend the rules more than in Concacaf, where two years ago French Guiana willingly forfeited its chances in the Gold Cup by fielding an ineligible player who had appeared 80 times for France.

All of these trends help explain how the Montserrat national team is on the verge of perhaps one of the most remarkable stories in the history of international football.

The Emerald Boys are a bit of a ragtag group of players, most of whom aren’t even from Montserrat. Many of the players qualify to play for Montserrat through parents or grandparents, particularly after the island’s population dropped to around 1,200 after a volcano erupted in 1995, rendering half of the island, including the capital, uninhabitable.

So most of Montserrat’s players live and play in England, eligible through FIFA’s fairly lax laws on which countries players can turn out for (which often helps the U.S.). The team’s top player, Lyle Taylor, plays for Charlton Athletic in the EFL League 1, England’s third tier. Montserrat also includes three teammates from Maidenhead United, a semi-pro team in the English National League.

The 2017 Caribbean Cup featured 25 of the 31 Caribbean nations, Montserrat not included. There wasn’t even really a winner, with four teams winning groups to earn qualification to the 2017 Gold Cup.

But the 2019 Gold Cup will be different.

With qualifying for the Concacaf Nations League going on from Sept. 6 to March 24, Concacaf has turned that competition into Gold Cup qualifying.

In the past, we’ve written about the ridiculous 34-team table involved in the Nations League qualifying process, which is really a farce if you think about the fact the teams play just four matches each.

The top 10 teams out of the Nations League qualifying will join the six teams that made the final stage of 2018 World Cup qualifying (which includes the U.S., despite not making it over the final hurdle) at the 2019 Gold Cup.

It’s a real mess of a format, but the tl;dr is that the 34 teams were divided into four pots and play one team from each pot. This is the key to how Montserrat is in position to qualify for the Gold Cup.

One match of the four remains for each of the 34 participants in the Concacaf Nations League qualifying campaign (except for Bonaire and British Virgin Islands, who have two matches over the coming days, including one against each other).

As expected with so few matches, the table is a jumbled mess, with six unbeaten teams at the top with nine points, six winless teams at the bottom and countless teams in between. 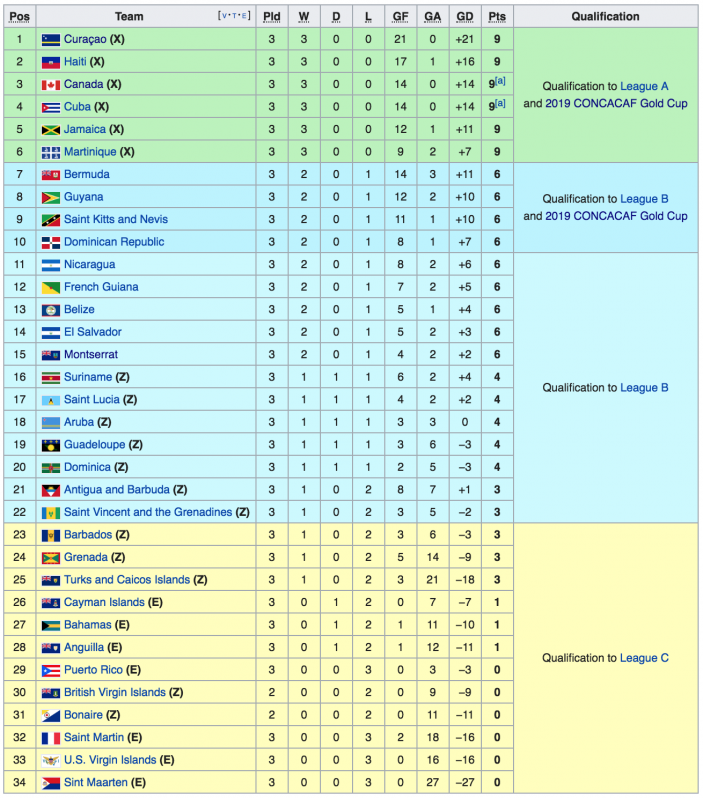 As we mentioned, the top 10 qualify for this summer’s Gold Cup (with the top six going into League A of the inaugural Concacaf Nations League). There are few real surprises on the table, except maybe little Montserrat.

The Emerald Boys sit in 15th place, last among the nine teams with six points based on goal differential after losing to El Salvador 2-1 and beating Belize (1-0) and Aruba (2-0). They need to pass five teams to reach the Gold Cup. Normally this might seem like an impossible situation, particularly for a country ranked No. 200th in the world. But this is Concacaf, where normal is a dirty word.

Montserrat’s final match is against the Cayman Islands, a fellow Pot D (the lowest) entrant. The Cayman Islands, ranked No. 203 in the world, lost its first two matches by a combined 7-0 score line, but did hold Saint Lucia to a 0-0 draw on Match Day 3.

A win over the Cayman Islands isn’t a given, but it’s by no means a long shot given the stakes and form of the two sides.

But the Montserrat national team is going to need some help — and a lot of it.

With five teams in front of it, Montserrat can’t count on racking up a huge goal differential to jump into the top 10, especially considering its four goals thus far ranks in the bottom half of the 34 teams. But it can count on the teams ahead of it devouring themselves because teams will now be playing against foes from their same pot, in theory creating more competitive matches.

During the final match day, the Montserrat national team needs five of the eight other teams tied on six points to teams to drop points — assuming the Emerald Boys take care of business against the Cayman Islands.

Two of the final matches will feature a pair of teams on six points apiece (Bermuda vs. Dominican Republic; Guyana vs. Belize). Two of the teams on six points will face heavily favored teams (El Salvador vs. Jamaica; French Guiana vs. Canada). Saint Kits and Nevis and Nicaragua are both threats to take all three points against Suriname and Barbados, respectively, to move to nine points.

All told, that’s at least two and possibly six teams that are likely to drop points. Then again, it's conceivable only two of the teams drop points.

So while Montserrat needs at least three other matches to go its way, it’s not farfetched that it could happen. It’s far more likely than the absurd events that transpired to keep the U.S. out of the 2018 World Cup, not that we’re still bitter or anything.

Will it happen? We’ll find out soon.

The final match day of the Concacaf Nations League qualifying begins on Thursday, though the real action heats up over the weekend. The Montserrat national team plays the Cayman Islands on Friday while the remainder of the matches will be played on Saturday and Sunday.