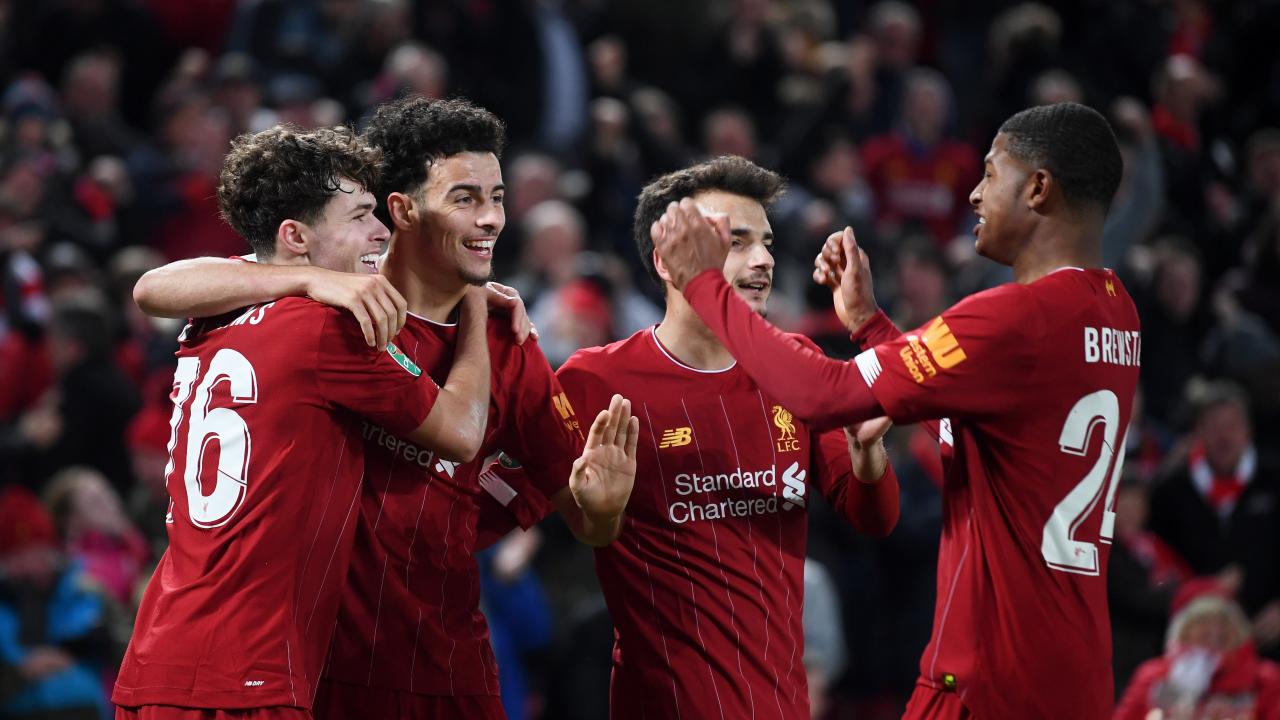 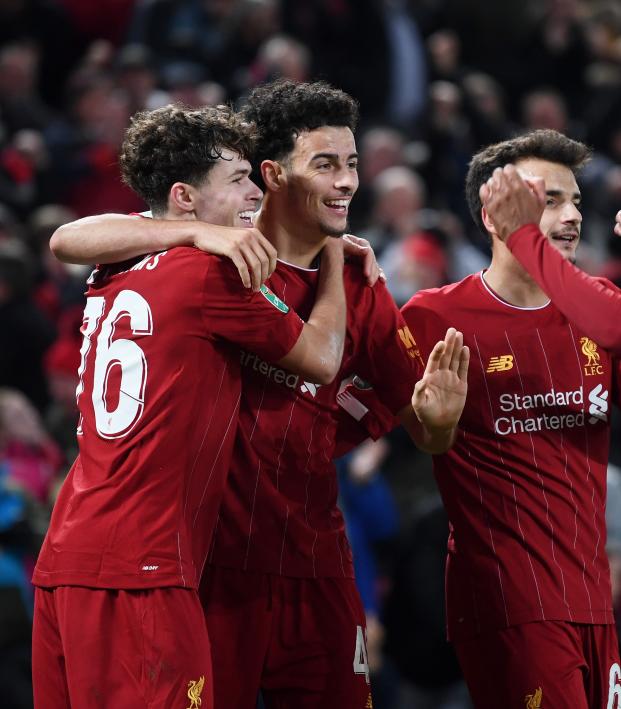 Travis Yoesting October 30, 2019
You should Carabao watching the highlights for this wild match.

The Carabao Cup inspires hatred from many soccer fans who would rather be watching the Champions League at midweek and Premier League coaches who don’t care enough to play any of their regulars. Your dad would probably call it the “Don’t Carabao Haircuts Cup” because of all the shaggy haired teens taking the field in EPL uniforms.

After playing to a 5-5 thriller in regulation, the match went straight to a shootout, where Liverpool won 5-4 to advance to the quarterfinals.

Not since Arsenal’s 7-5 win over Reading in 2012 have we seen such a ridiculous, goal-filled League Cup match.

Arsenal’s visit to Anfield was not a match either manager took too seriously. As evidence, Jurgen Klopp kept Sadio Mané, Mohamed Salah and Roberto Firmino in the stands. Even more proof: Unai Emery let Mesut Özil on the pitch for the second time all season.

Arsenal, whose group of backups was far more experienced than Liverpool’s, looked more comfortable for most of the match, but was constantly pegged back by a home side spurred on by an unrelenting Anfield crowd.

Neither side had any sort of defensive discipline, which created a wildly open match, with the outcome in doubt until the final whistle. In the end, Liverpool’s superiority from the spot proved the only difference between the sides.

Arsenal seemed intent on following the most Arsenal of scripts in the opening moments. Former Gunner Alex Oxlade-Chamberlain played in a cross that Shkodran Mustafi managed to knock into his own net.

After captain Granit Xhaka’s rage quit on Sunday, things were going quite well for Jose Mourinho’s hopes of returning to coach in London.

But then Lucas Torreira equalized thanks to the lack of VAR, as the Uruguayan was clearly offside before knocking in a rebound. It followed some nice play from Arsenal though, for what that’s worth.

The 18-year-old Brazilian scored two goals in 10 minutes to make it 3-1, taking his tally to seven goals in seven appearances (four starts) this season, mostly in the Carabao Cup or Europa League.

Upset in the cards?!

Gabriel Martinelli bags a double in the first half! pic.twitter.com/C0sLjBP5IB

It looked like Arsenal might roll to a comfortable halftime lead, especially after the referee ignored a hand ball in the box from Hector Bellerin in the 42nd minute.

To make up for the missed call — again, there’s no VAR in the Carabao Cup for some reason — the ref awarded Liverpool a penalty kick after 16-year-old Harvey Elliott took a dubious plunge in the box with Martinelli in the vicinity. Old Man James Milner converted the spot kick.

Arsenal restored its two-goal lead early in the second half after Milner gifted the Gunners an opportunity with some lazy passing. Note the ridiculous pass from Özil to Ainsley Maitland-Niles, though if Özil were quicker he’d have had a tap-in.

Özil, it should be said, played well before coming off in the 65th minute, especially considering, if the match announcer on ESPN+ is to be believed, he hadn’t touched a ball in months.

At 4-2, were just getting started.

Four minutes after conceding, Oxlade-Chamberlain ripped an absolute cracker past Emiliano Martinez in goal for Arsenal.

A ROCKET FROM OXLADE-CHAMBERLAIN!  pic.twitter.com/MNtnc1NBhS

There was such power on the shot that even Divock Origi was inspired to do something. After being mostly quiet on the pitch, the Belgian made a brilliant turn before smashing a shot past Martinez to equalize at 4-4 in the 62nd minute.

A brilliant turn and finish from Divock Origi! pic.twitter.com/gj8XISc2jM

Then Arsenal’s 20-year-old Joe Willock turned the match up to 11 (or nine, I guess, given the number of goals at the time). Liverpool defenders, perhaps tired after picking the ball out of their own net so often, failed to bother Willock running straight down the middle of the park.

So Willock launched one into the back of the net.

Finally, with Liverpool running out of time, Origi came up with another massive goal for Liverpool, swinging in a scissor kick goal in the 94th minute to equalize at 5-5.

This 10-goal thriller will be decided by penalties thanks to this late Origi goal! pic.twitter.com/z2A6sBggrJ

The match went straight to penalty kicks, unlike the aforementioned Arsenal-Reading match of seven years ago, which was a true shame given the excitement of the opening 90 minutes.

Arsenal went 4 for 5 from the spot, with Dani Ceballos having his effort saved by a 20-year-old Irish keeper by the name of Caoimhin Kelleher, which I will not try to pronounce (cow-man?). Liverpool made all five of its attempts, with this 18-year-old stud supplying the finishing touch. 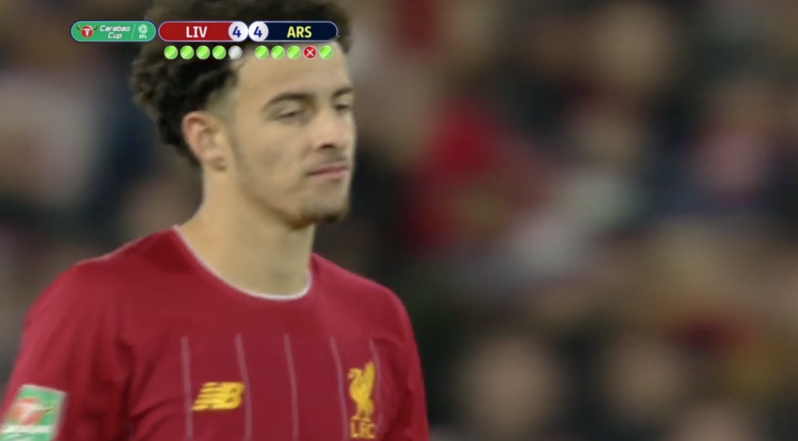 So what does all this mean?

Not much, really. No club is going to fire its coach over a Carabao Cup match, so Emery’s job is safe, for now. Liverpool might face a little more fixture congestion by continuing in the competition, but Klopp can continue to play kids with a few old men and get by well enough because the focus is on the Premier League (and Champions League).

And our dear readers get to check out some insane Liverpool vs Arsenal highlights.