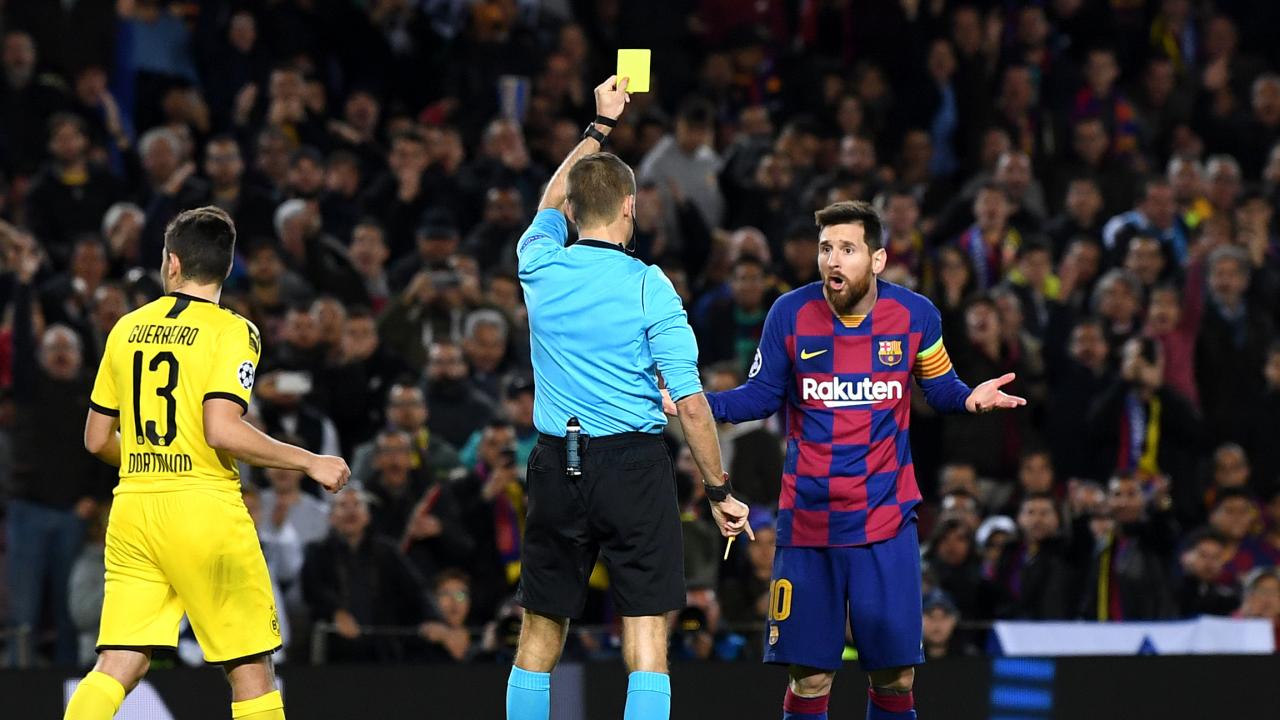 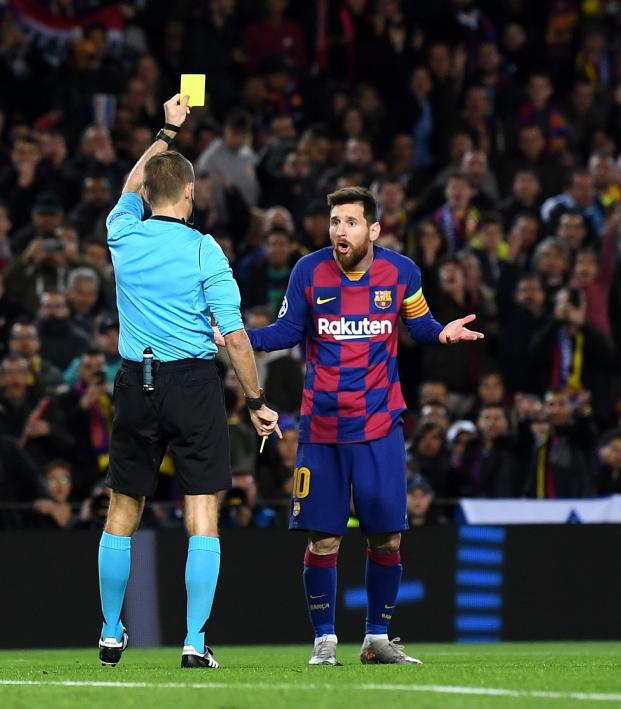 Seeing Lionel Messi dive is about as rare as seeing the Argentine pick up a red card. It might happen from time to time, but not enough for anyone to legitimately call Messi a flopper.

Don’t tell that to 36-year-old referee Clement Turpin, who officiated Barcelona’s Champions League match against Borussia Dortmund on Wednesday at the Camp Nou.

Messi had a goal and two assists to lead Barcelona to a comprehensive 3-1 win. His fingerprints were all over the match as the Blaugrana clinched passage to the UCL Round of 16.

But Messi was given a rare booking for simulation after going down in the box — despite the fact he was telling the referee not to call a penalty.

In the 51st minute, with Barcelona already leading 2-0, Messi burst into the box on one of his inimitable runs. Messi tumbled to the turf before jumping immediately back to his feet, motioning to the referee that it wasn’t a penalty kick.

Turpin didn’t care and whipped out his yellow card to caution Messi for diving.

While it did appear Messi went down under no real contact, it’s hard to tell if he tripped himself or was trying to con the referee into awarding a penalty kick. But if Messi had been diving, he wouldn’t have gotten up and appealed to the ref to not give a PK, unless he’s really bad at diving.

Alas, Messi was shown yellow and Cristiano Ronaldo fanboys will try to point to this moment as proof Messi sucks and CR7 is the only great player. (They’re both amazing and anyone who says otherwise is an idiot.)

Messi got a yellow card for diving  pic.twitter.com/SRNTBlpEOh

As for the rest of the match, Messi was Messi, linking up with Uruguayan Luis Suarez and wannabe Uruguayan Antoine Griezmann for the game’s goals.

Suarez scored first for Barça, with Messi accepting a poor clearance and placing the ball right in Suarez’s stride for the opener in the 29th minute.

A mere four minutes later it was 2-0.

Dortmund shot itself in the foot thanks to an awful attempted pass from Mats Hummels. The giveaway set up a one-two between Messi and Suarez, with the Argentine supplying one of his trademark left-footed finishes.

Messi has now scored against a record 34 different teams in the Champions League.

Lionel Messi scores against his 34th opponent in the Champions League

Later on, after the alleged Lionel Messi dive, Messi set up Griezmann for the third with a lovely through ball in the 67th minute.

Jadon Sancho pulled one back for Dortmund 10 minutes later.

The 19-year-old who earlier in the day missed out on winning the Golden Boy award — João Félix won — created his own space to blast a shot from the edge of the 18.

The result put Barcelona on 11 points and Dortmund on seven with one match remaining. Inter Milan moved up to seven points (ahead of BVB) after beating Slavia Prague 3-1 on Wednesday, leaving the two to fight over second place in Group F on the final match day. Inter hosts Barcelona and Dortmund plays at Slavia on Dec. 10 to close out the group.